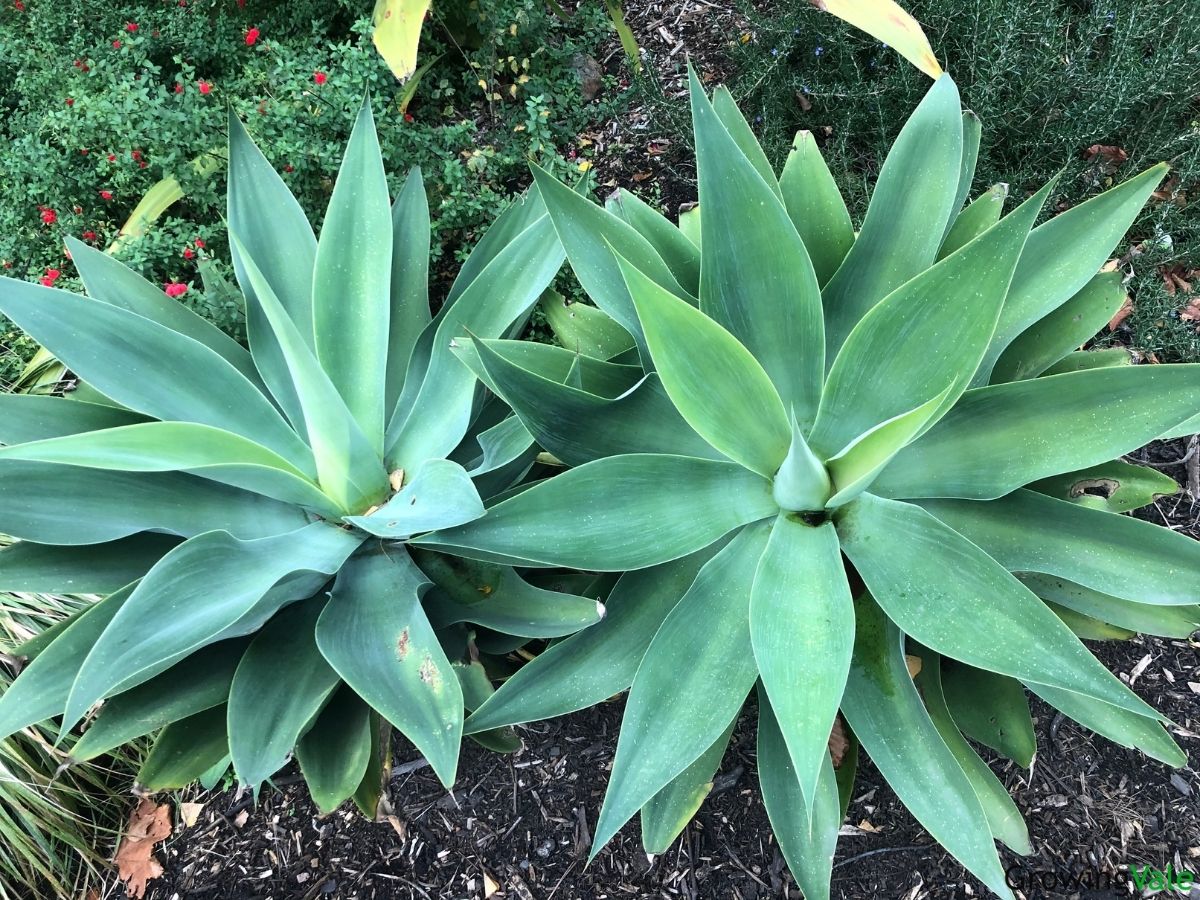 Agaves are spectacular landscape plants that require very little maintenance and are easy to grow. They have succulent leaves that are often large and form a beautiful rosette. Many people also like to grow Agaves in pots because of their striking appearance and low maintenance requirements.

Some species of Agave can have leaves that measure 8 feet in length. Most Agave leaves have spines along their edges and on the tip. Agaves come in a range of colors. These include pale green, blue-grey and there are some species that have striped or variegated leaves.

Agaves are monocarpic. This means that once a rosette has flowered it will die. Luckily though, Agaves are naturally reproductive. This means that they can create new rosettes from the base of the main stem. Some species of Agave also produce rhizomes underground from which new plants will grow.

In addition, there are certain Agave species that produce bulbils. These are tiny bulb-like structures that grow on the inflorescence of the plant.

The name Agave comes from the Greek word “agavos”. This means illustrious. The original inhabitants of western Mexico, the Nahuatl people, used to worship the Agave plant because they thought that it was a representation of the goddess Mayheul’s earthly power of rain, wind, and crops.

Archeologists have discovered human remains dating back at least 10,000 years that showed Agave being used for both fiber and food. Therefore, we can assume that Agave is an ancient plant that has been grown for many thousands of years.

Is Agave a Cactus?

Agave plant is a type of succulent with long leaves but it is not cacti.

How to Plant and Grow Agave

Agave plants can be grown both in the ground and in pots. It requires very little maintenance and adds a striking appearance to any landscape. Because Agave produces a long taproot, the plant doesn’t like to be moved once it’s established.

When growing in a pot, make sure that you select one that is large enough to accommodate the growth of the plant. You should select a pot that is around twice the depth and width of the rootball.

How to Propagate Agave

Because Agaves are monocarpic, each rosette will die after it produces a flower. However, this can take around 20 to 30 years. For this reason, it’s important to propagate new plants from the offsets or suckers that can be detached from the base of the plant.

Agaves are very easy to propagate. All you have to do is separate the “pups” from a mature plant and pot them up. These pups normally form at the base of the plant and most of these will already have roots. Therefore, you can plant them into a container filled with a free-draining potting mix and watch them grow.

If you happen to have an Agave that is blooming, you’ll notice lots of tiny bulbils forming on the flower stalk. These are basically baby plants. You can either cut those off or wait for them to fall off on their own. Start with the ones on the base of the flower stalk as these are the more mature ones.

To help these baby plants to root, just pop them into a container filled with good quality potting mix. Put this container in a shady spot and keep the soil moist. Soon the tiny plants will produce roots and you can then pot these up into larger pots.

Agaves are easy to care for and don’t have any specific requirements. Like all succulents, they don’t like to be overwatered but do like a drink when the weather is very hot and dry.

Take extra care around mature plants as the spines on the tips of the leaves are very sharp and can cause injury if you’re not careful. Also, make sure that you wear gloves if you’re doing any trimming as the sap can cause contact dermatitis.

Agave prefers well-drained soil. When grown outdoors, they’re not too fussy on the type of soil that they will grow in as long as the soil is low in clay content. If you do have heavy clay soil, you might need to add some organic matter to help to break up the clay particles.

When grown in containers, Agaves will happily grow in a good quality potting mix that is free-draining. Remember, they don’t like having wet feet.

If you want to make your own mix, just blend together two parts sand (builders) and one part compost. You can also add a little slow-release fertilizer to keep the plants well-fed.

Due to its succulent nature, Agave only requires watering in hot, dry conditions when grown outdoors. You should water the plant deeply once or twice a week when rain is infrequent.

Agave plants that are grown in pots should be watered deeply once a week especially in warmer weather. However, you can let the soil dry out in between watering. Remember that Agaves store water in their leaves. This means they can survive for quite a few days or even weeks if the soil dries out completely.

Like all succulents, Agaves don’t like to sit in water and will rot in water-logged soils. So, the most important thing to remember with these plants is not to overwater them.

Agave, whether grown in the ground or in pots, should be fertilized in the fall and in spring with a balanced fertilizer. This promotes strong root development and encourages the growth of healthy foliage.

Agave can be grown in full sun to part shade. However, it must be protected from frosts. Most Agaves, however, prefer to grow in the sun.

If you’re growing your Agaves indoors, make sure you place them in front of a window that lets plenty of sunlight in. If they don’t receive enough light, Agaves will start to stretch up to the light. This means their beautiful rosette shape will get distorted.

Most Agaves will thrive in areas that have warmer temperatures with seasonal dry periods. There are some species, however, that will tolerate colder temperatures and more extreme heat.

For example, Agave parryi can tolerate temperatures as low as -20 degrees Fahrenheit. However, most species prefer to live in a Mediterranean climate with winter temperatures above zero.

Agaves don’t require regular pruning except to remove any damaged leaves. When you prune off a leaf, trimming the cut to a “V” will keep the overall symmetry of the plant.

To do this, just make two cuts, one on either side of the leaf so that a pointed tip is maintained at the cut edge.

When working with your Agave, be aware that the sap could cause skin irritation or contact dermatitis. Therefore, make sure that you wear gloves to protect your skin from contact with the sap.

The main pest that attacks Agaves is the Agave snout weevil. These are small, black beetles around a half-inch long. These insects lay their eggs in the core of the Agave. Once the grubs hatch, they munch on the heart or stem of the Agave, causing the plant to eventually die.

To treat this pest and avoid too much damage to your Agaves, do the following:

Tip: If you scatter earthworm castings around the soil of your Agaves, you may prevent an infestation of Agave snout weevil. This is because earthworm castings contain an enzyme called chitinase. This enzyme destroys the exoskeletons of insects that come into contact with it.

Keeping your Agave plants in pots is also a good way to avoid damage from the weevil because you have full control over the potting mix that the plant is grown in. It’s also far easier to treat a plant in a container if you notice any weevil damage.

Agaves have been used by the Mexican people for centuries. The fibrous tissues in their leaves have been used to make ropes, nets, sandals, sleeping mats, and brushes. The thick stem that is revealed once the leaves are removed can be roasted and eaten.

This stem is high in carbohydrates and is also used to make certain alcohols and agave nectar. For example, blue Agave is used to make tequila.

Another product that you might be aware of is the Agave sweetener that many people use as a substitute for sugar. This is extracted from the stem of the plant as well. Because the raw sap of the Agave is toxic, the extracted nectar requires heating or cooking before it is safe to consume.

There are many different types of Agave plants. Here are just a few:

Agaves are ideal landscape plants and can also be easily grown in containers either on your deck or indoors near a brightly lit window. They require very little maintenance except for water once a week and a feed once a year.

As with all succulents, make sure that you don’t overwater them. You also need to be aware of the sharp spines around the edges and on the tips of the leaves. Therefore, make sure you keep these plants away from small children and pets.

There are a multitude of varieties to choose from so you’re sure to find just the right one to add to your collection.