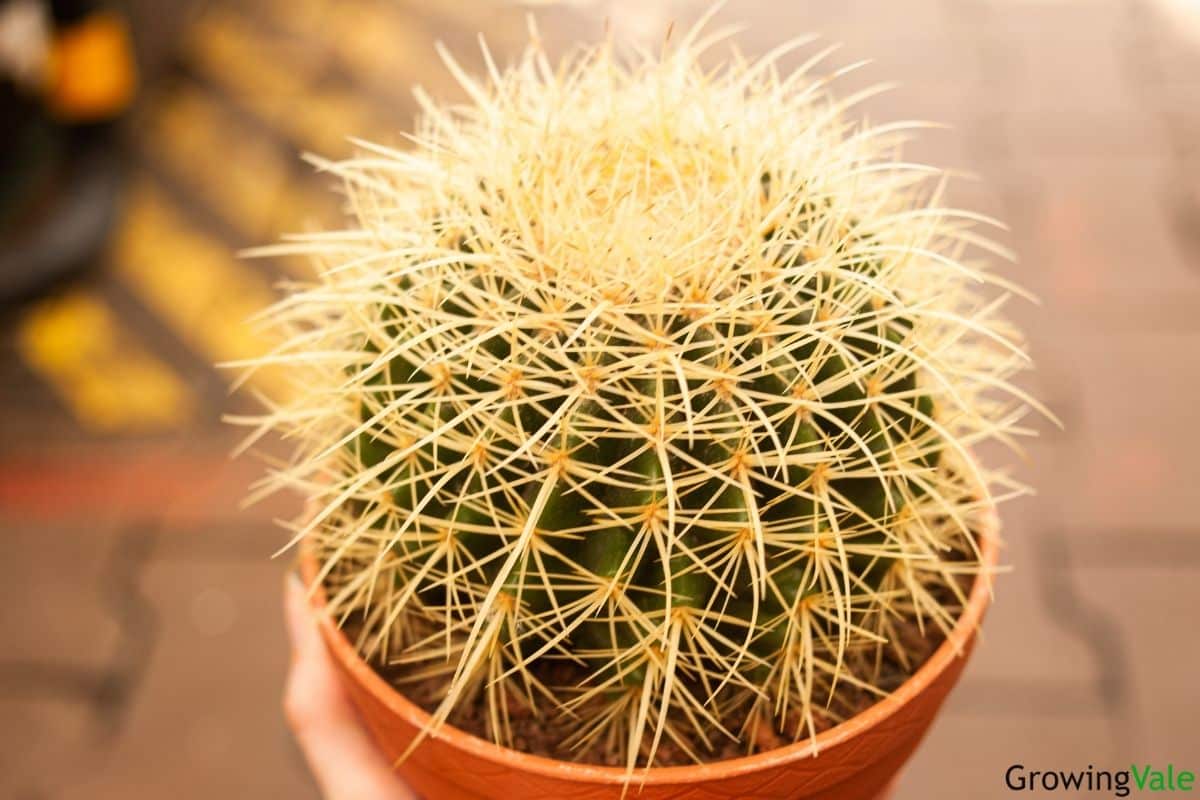 Plants commonly called Barrel Cactus belong to either the Echinocactus genus or the Ferocactus genus. To a lesser extent, certain species in the Astrophytum, Echinopsis, Sclerocactus, Neolloydia, and Thelocactus genera are also sometimes called barrel cacti.

In the Echinocactus genus, there are around six species that are native to Mexico. One of the more common of these is the Golden Barrel cactus, E. grusonii. These species can be distinguished by their wavy ribs and elongated fruits.

The genus Ferocactus contains around 30 species. These generally originate from the southwestern United States and northern Mexico. They are distinguished by their very strong stiff spines, some of which can be up to 4 inches long. These cacti also have prominent ribs.

Barrel cacti are easy to grow and are considered relatively fast-growing. Some species produce round offshoots that can be used to propagate new plants. However, the more common way to propagate these plants is by using seeds.

When the barrel cactus flowers, it takes on a whole new look. The flowers appear at the top of the crown usually in a ringed cluster. Depending on the species, these flowers can be yellow, red, pink, or orange. Once the flowers have finished, the plant will produce fruit that looks like small pineapples. Inside these fruits, you’ll find thousands of tiny black seeds.

Some of the largest specimens of barrel cacti have been found in the Mojave Desert in Southern California. It has been noted that these plants can live for over 100 years.

The botanical name Ferocactus is Latin and means “fierce cactus”. This is easily explained by the sharp spines that cover the fleshy stems of this plant. On the other hand, Echinocactus comes from the Greek word “echinos” which means spiny.

It’s believed that travelers who had lost their way in the desert would often look for a barrel cactus. This is because the plant instinctively grows tilted to the southwest. For the plant, this is a survival tactic and a way of not being burned by the hot afternoon sun.

How to Plant and Grow Barrel Cactus

Barrel cacti can be grown either outdoors or in a large pot inside in a warm and bright spot. Out in the garden, a barrel cactus makes a great addition to a rock garden among other succulents.

If you plan to grow a barrel cactus indoors, make sure you place it in the warmest room in your house and where it will receive plenty of bright light. Make sure that you use a light cactus potting mix and water your plant sparingly.

How to Propagate Barrel Cactus

Barrel cacti can easily be propagated from seed. The seeds will germinate readily given the right conditions. Here’s what to do:

Barrel cacti are very easy to maintain and don’t require a lot of care. As long as they are planted in well-drained soil, receive a little water in the warmer months, and are fertilized once a year, they’ll grow happily on their own.

When considering the type of soil that this cactus needs, think about where it grows naturally. The plant can handle even poor soils as long as they are well-drained. This is definitely not a plant that you want growing in wet areas in your garden.

Ideally, a sandy loam is best and will give the cactus exactly what it needs to thrive. If you do happen to have heavy clay soil, you’ll need to improve the drainage of the soil first if you want to grow barrel cacti in your garden.

Otherwise, grow these impressive cacti in a large terracotta pot and move them around to add some extra interest to your garden, porch, or patio. Just remember not to place your plant in a high traffic area as the sharp spines can be quite damaging.

Barrel cactus, as you would imagine, is very drought tolerant. The plant stores water in its barrel-shaped stem. This helps the cactus to survive in even the most arid desert regions.

Therefore, you only need to water your cactus around once a month during summer. It doesn’t require watering during the colder months.

It’s a good idea to give your cactus some balanced fertilizer in fall and spring. This will promote strong root growth and will encourage your cactus to flower.

Barrel cacti should be grown in full sun but doesn’t mind a little protection from the scorching afternoon sun. Fortunately, the heavy cover of spines does prevent the plant from suffering sunburn, even on the hottest days.

If growing indoors, choose a nice bright spot that does not receive direct sunlight. This is because the heat of the sun is intensified as it passes through the glass of the window. This could easily scorch your plant.

Barrel cacti originate from hot, desert regions. Therefore, they do prefer the warmer weather and don’t mind some humidity. However, the desert does get cold at night, so these cacti are adaptable to temperature variances.

Ideally, the preferred temperature is within the range of 64 to 86 degrees Fahrenheit. (10 to 30 degrees Celsius). Some species can be quite frost-tender. So, if you live in a zone that gets freezing temperatures at night, it’s best to grow your cactus indoors during the winter months.

These plants don’t need any pruning.

Barrel cacti can be susceptible to attacks from mealybugs and scale insects. These can be difficult to remove due to the sharp spines that the plant has. You can try picking off the offending insects with a pair of tweezers or spray the plant with some diluted apple cider vinegar or isopropyl alcohol.

Native Americans would collect the fruit of the barrel cactus to keep as an emergency food supply if they experienced extreme drought conditions. Generally, the fruit is quite dry and bitter and not very palatable.

In Mexico, however, the flesh of the barrel cacti is candied and is considered a treat.

Native Americans also collected the flowers of some species and these were eaten dried or even fresh. The tiny black seeds produced by the fruit were ground up and also used for food. The sharp spines of the Ferocactus were often used as fishing hooks as well.

The barrel cactus is an interesting plant to add to your cacti or succulent collection. The plant is easy to care for and doesn’t require a lot of maintenance. It’s an attractive barrel-shaped cactus with rather sharp spines.

Each plant takes around 2 to 3 years before it starts flowering but the wait is definitely worth it. The lovely, bright flowers in colors of yellow, red, pink or orange will certainly brighten up your day.