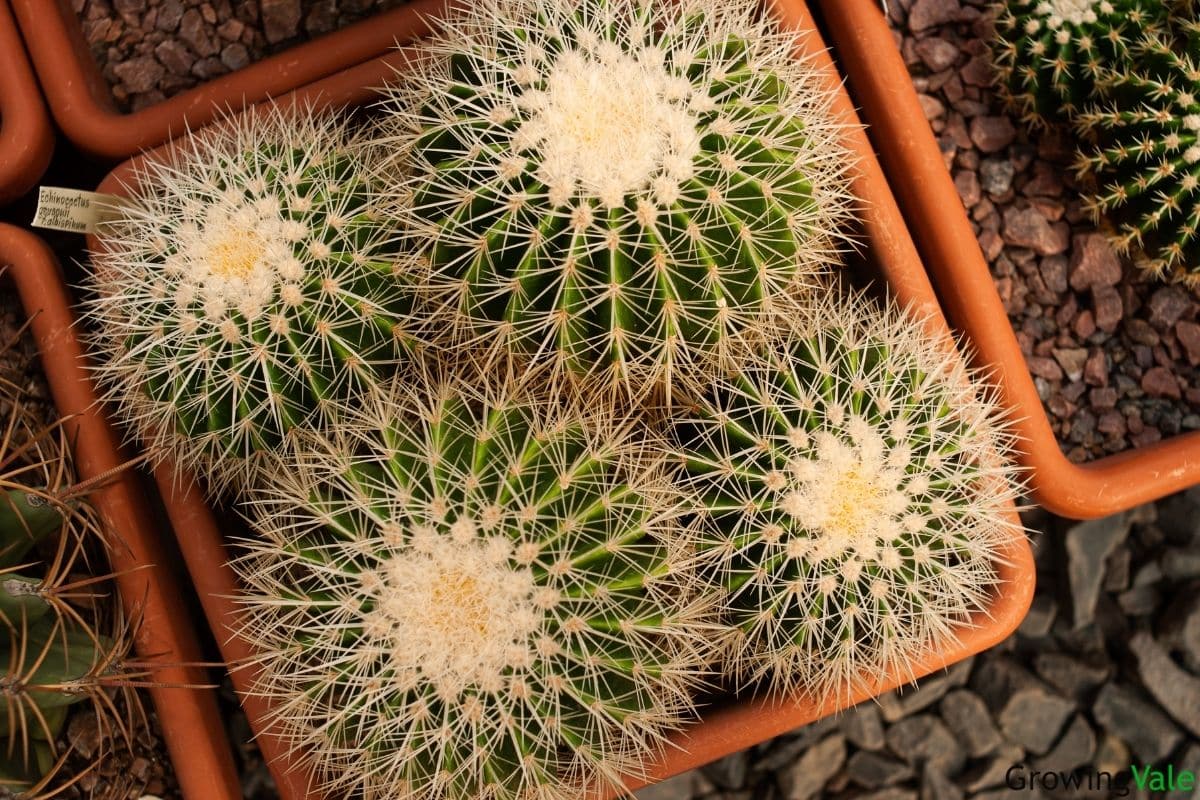 Barrel cacti are easy to grow and require minimal watering. They originate from arid desert regions of North America and Mexico. For this reason, they’re well adapted to surviving drought conditions.

You can grow these lovely cacti outside as long as you have really well-drained soil. They’re ideal for growing in rock gardens or desert-type landscapes.

Barrel cactus plants are also very suited to growing in pots, either outdoors or inside on or near a very bright windowsill. You only need to water them in the warmer weather and fertilize them once a year to encourage blooming.

There are primarily two genera that include barrel cacti. These are Echinocactus and Ferocactus. Here’s a selection of different varieties that you can grow.

The golden barrel cactus is one of the most popular of all barrel cacti. It is often grown by cacti and succulent enthusiasts and makes both an interesting specimen for the garden or as an indoor plant. This plant produces a lovely round barrel that is covered with golden yellow spines.

It almost looks like a soft pincushion, however, the spines are quite sharp, so care must be taken when handling the plant. The barrel of this cactus can reach a diameter of around 3 feet. The flowers appear in summer on the crown and are bright yellow.

Once this cactus is mature enough, it may produce offsets at the base. This eventually leads to a large cluster of dozens of individual stems.

This is a single stem cactus. The fleshy stem is covered by many very sharp, thick spines. When mature, the multitude of spines almost obscures the fleshy stem beneath which is a blue-gray in color.

The flowers of this species are a bright pink and appear on the crown in early summer. Beneath the flowers, the crown has a dense mat of wooly hair that almost looks like cotton wool.

In its native habitat, this cactus can easily grow up to 8 feet tall and 31 inches in diameter. However, this is a slow-growing barrel cactus so it would take many years for a cultivated plant to get this large.

The plant has light green to yellowish stems and a very wooly crown. When young, this cactus can have purple bands around the stem. The flowers appear in spring and summer and are only open during the day. They are bright yellow in color.

This is one of a few barrel cacti that actually form clusters, sometimes with up to 200 stems or barrels. Each barrel is around 8 inches in diameter. This plant has very dense short spines that almost hide the fleshy green stems. These spines are brown but can turn bright red when the plant gets wet. The flowers are small and yellow.

This is a low-growing cactus that is often twice as wide as its height. It has wide, prominent ribs that have clusters of short, sharp spines growing out of wooly areoles. In its native habitat, the plant is often partly hidden and the spines pose a danger to any animal that may accidentally stand on them.

However, this has become a popular plant for collectors because it’s both frost-hardy and can tolerate a little extra water. Plus, the pink flowers are quite stunning with their pale pink petals and dark pink centers. This plant also produces bright red fruits once the flowers have finished.

This is quite a colorful cactus. The color comes from the many spines that grow from the green ribs of the stem. These spines are often bright red but they can also be yellow or pale gray. The spines are profuse and hide the fleshy stem beneath.

The plant produces flowers in May and June and these are yellow and tinged with red. After the flowers come fleshy, yellow fruits that are covered with scales.

If you want to grow your cacti collection in pots and don’t want to re-pot too often, then you need to add Ferocactus chrysacanthus to your collection. This is an extremely slow-growing cactus that has beautiful golden or red spines. In fact, this is one of the spiniest of all Ferocactus species.

The spines almost cover the green stem which is deeply ribbed. The flowers appear in a ring at the top of the crown and are often yellow in color.

This is one of the taller growing barrel cacti. The stem forms more of a columnar shape rather than a rounded barrel. It can grow to 10 feet tall. The cactus is covered with reddish spines that are flat and have curved tips. The California barrel cactus flowers in spring to summer with flowers ranging in color from yellow to orange and red.

Ferocactus emoryi can grow to a height of 4 feet. It has hooked spines, with the main ones being flattened against the stem. The plant produces lovely bright red flowers in summer. Both the flowers and fruit of this cactus are edible. However, the flesh or juice of the stem can cause diarrhea, nausea, and temporary paralysis.

This is another very attractive barrel cactus that is perfectly suited to growing in a lovely terracotta pot. The stem is deeply ribbed and blue-gray in color. There are golden spines down each rib but these are quite short although still sharp.

This cactus produces dainty lemon yellow flowers around the crown and these are followed by white fruits.

This smaller growing cactus makes up for its miniature size by having a mass of fierce spines all along the ribs of the stem. The central spine can grow to a length of 6 inches and is hooked on the end. The spines vary in color from red to white or yellow. The flowers are yellow and often 3 inches in diameter.

This is another distinctive-looking barrel cactus that every collector should have. The blue-gray ribs on the stems of this plant are adorned with bright red to orange spines. The central spine of each areole is quite wide, curves downward, and has a pointy tip. There are numerous radial spines from the same areole and three upward growing spines that are also broader than normal spines.

The flowers that grow on the crown are an iridescent purple which almost clashes with the color of the red spines. This cactus would definitely be a talking piece at your next dinner party.

Ferocactus robustus is one of the few clumping barrel cacti. In its natural habitat, this cactus will produce multi-stemmed clumps that are up to 10 feet in diameter. Each individual stem is fleshy, glossy, and emerald green. This species also has fewer spines than other varieties.

The spines grow out of areoles on the ribs but these are evenly spaced out. However, the spines are quite thick and sharp. The plant flowers in spring and fall with yellow or yellow-orange blooms.

This is another taller growing barrel cactus. It can reach a height of 10 feet. There are broad, strongly-hooked central spines on the many ribs of the stem. Because the flowers are not over-crowded by the spines, they can open fully. They range in color from orange to yellow and red. These flowers can appear over a two-month period from August to September.