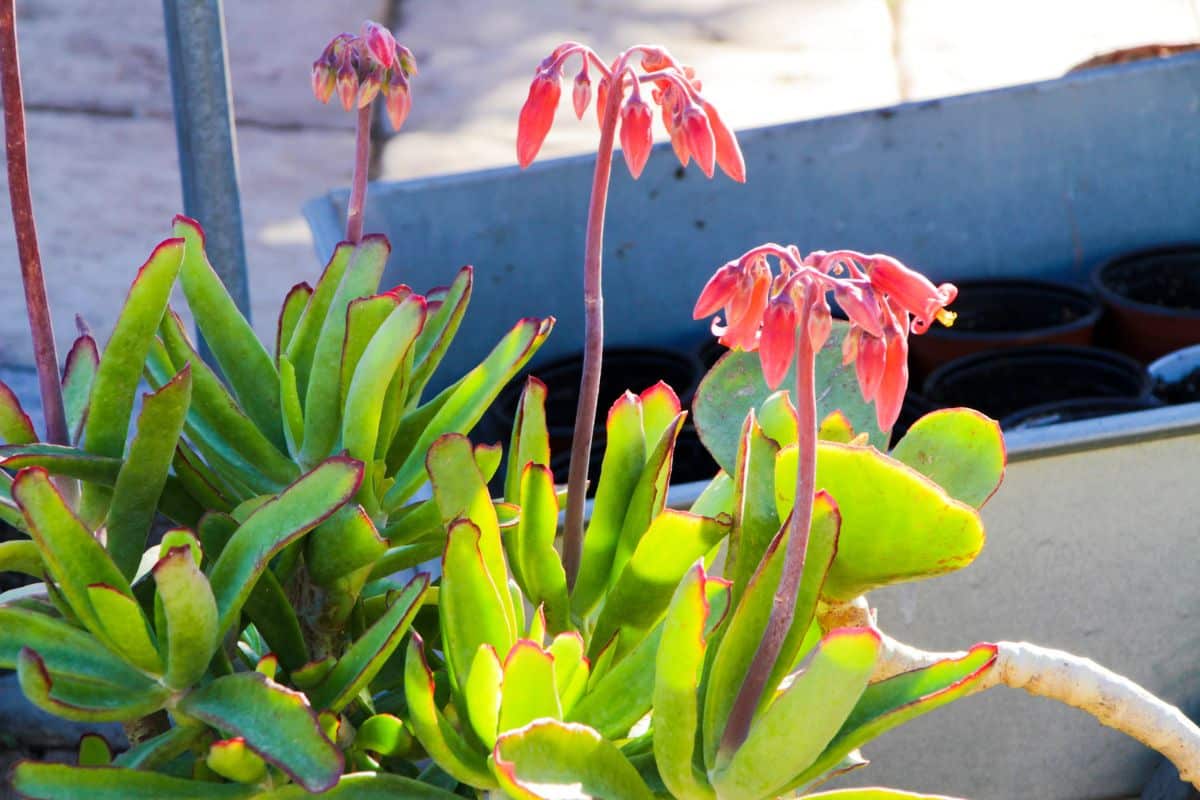 The pig’s ear succulent, scientifically known as Cotyledon orbiculata, is a remarkably fleshy succulent. This species is distinguished by its relatively large leaves, which have rounded margins that may flush red in optimal conditions. The leaves themselves are glossy and are usually bright green, though their finer features differ according to cultivar.

Native to South Africa, this flowering succulent may also be called round-leafed navel wort or white lady. It can grow as a shrublet in both wild and captive environments if its roots are afforded ample space to expand and are watered properly. Rewarding to cultivate and maintain in the garden, avid succulent fans will find themselves wanting to collect multiple varieties.

Due to its popularity in cultivation and its hardiness as a beginner-friendly succulent plant, the pig’s ear succulent now comes in more than a dozen cultivars. The best ones are those which bring out the plasticity of the leaves as well as their capacity to produce different pigments. To the untrained eye, these may look like completely different species!

Unlike the wide and glabrous leaves of the type pig’s ear variety, the oblonga has fingerlike leaves. They may become distinctly chalky, making them appear silvery-green to pale gray. Their smooth margins may occasionally be deeply red, though it is normal for just the tapered tip to have a blushlike color.

When this pig’s ear succulent undergoes stress or prolonged droughts, its leaves may develop a purplish hue. For this reason, it is also commonly referred to as ‘purple chalk fingers’. These are charmingly complemented by yellowish blooms, which may appear all throughout the year. The blooms open to reveal peachy tips and bright yellow anthers.

This pig’s ear variety definitely looks like its own species. With fleshy and noticeably rounded foliage, the shape of the individual leaves is more reminiscent of a sphere or egg. Hairless, slightly flattened along their margins, and evenly covered in a waxy coating, the leaves are greyish green in color. Their tips may naturally become purplish over time.

Native to Namibia and Southwestern Africa, this variety usually blooms in winter. Its waxy flowers emit a scent that some may liken to rotten meat. Regardless, they are able to attract bees, which are their main pollinators. Their petals are a soft pink along their outer surface and a deeper red along their inner surface.

As hinted at by the common name of this form, the margins of the leaves are set apart by their undulating or wave-like appearance. Almost sculpture-like, the leaves are reason enough to cultivate this eye-catching variety. Silvery green and shaped like a scallop’s shell, they are generously covered in a powdery coating that functions as a protective feature.

This pig’s ear succulent was developed by specialists in a garden setting. It grows to a maximum height of around 50 cm, making it an ideal plant to have in indoor spaces that could use some complexity and color. When provided with proper ambient conditions, it grows at a fairly fast pace and should be resistant to many diseases.

Native to South Africa, this pig’s ear variety makes for a lovely addition to outdoor succulent gardens as its mature shoots can grow as tall as 75 cm. On older plants, the leaves arise from woody branches. Occurring in whorls of 3, they are arranged in a spiral around the tips of each branch. Finger-shaped, each leaf tapers into a smooth and reddish upper edge.

The dainty flowers of this pig’s ear may begin to appear in summer. They are borne on the tips of purple to pink flower stalks which extend several inches above the leaves. Buds develop into bell-shaped blooms with a downward-facing orientation. Each measuring up to 3 inches, the blooms open to reveal orange-red petals.

This stunning pig’s ear succulent has leaves which look like they are the elongated versions of the oophylla variety. With their greenish to purple hues, along with an upper margin that may appear more deeply colored, the foliage can collectively make a statement in just about any garden. They look best under filtered rays of direct sunshine.

This variety thrives best in well-ventilated and brightly lit conditions in USDA zones 9b-11b. As it is capable of growing up to 5 feet tall, it is perfect for parts of a desert garden that could use some vertical dimension. Its flower stalks, which can grow to an impressive length of about 2 feet, can make the plant appear even taller.

The foliage of the ‘staghorn’ pig’s ear succulent does indeed resemble the antlers of male deer. The upper margin of the leaves is subdivided into 2-3 tips, each with a slightly tapered end. In optimal conditions, the tips develop a reddish coloration which contrasts the rest of the leaves’ grey-green hue.

This visually interesting pig’s ear variety can grow to a moderate height of about 12 inches. In midsummer, it may produce umbel-shaped inflorescences with drooping blooms. Petals are usually reddish and tend to attract many pollinators. The blooms are borne on long stalks that add complexity to the plant.

If you gravitate towards the larger and broader-shaped leaves of the standard pig’s ear variety, you may prefer this fleshy cultivar. The leaves are slightly wavy and spoon-shaped, with upper margins that may possess a distinct brown to red line. These arise from shoots that can grow up to 2 feet tall.

The blooms of this cultivar usually appear in summer. Bell-shaped, they dangle in a downwards orientation from lengthy stalks. Their petals are a charming shade of bright orange.

The shape of this variety’s leaves is quite variable. In optimal conditions, they have a flapjack-like shape and are grayish to bluish green in color. Naturally distributed in South Africa’s Karoo region, this pig’s ear produces orange, tube-shaped blooms in the spring. These are borne on floral stalks that grow to about a foot in length.

This pig’s ear cultivar is perfect for gardens that could use some muted color. Its spoon-shaped and moderately tapered leaves are lined with red margins. When provided with ample sunlight, they arise in a compact manner and may fully hide the shoot. Their structure is great for adding texture to just about any space.

Able to reach a height of about 2 feet, mature plants have a neat appearance and are easy on the eyes. Healthy specimens may produce an abundance of orange blooms in summer.

This petite pig’s ear grows to a maximum height of just 8 inches. It can be grown as a desk companion or added to container succulent gardens that are situated outdoors. Interestingly, despite its full size, its oldest leaves can measure as much as 4 inches long! Thin and grayish, they have burgundy-colored upper margins.

Blooming in winter to spring, this pig’s ear succulent produces impressively tall spikes that may be several times the height of the plant itself.