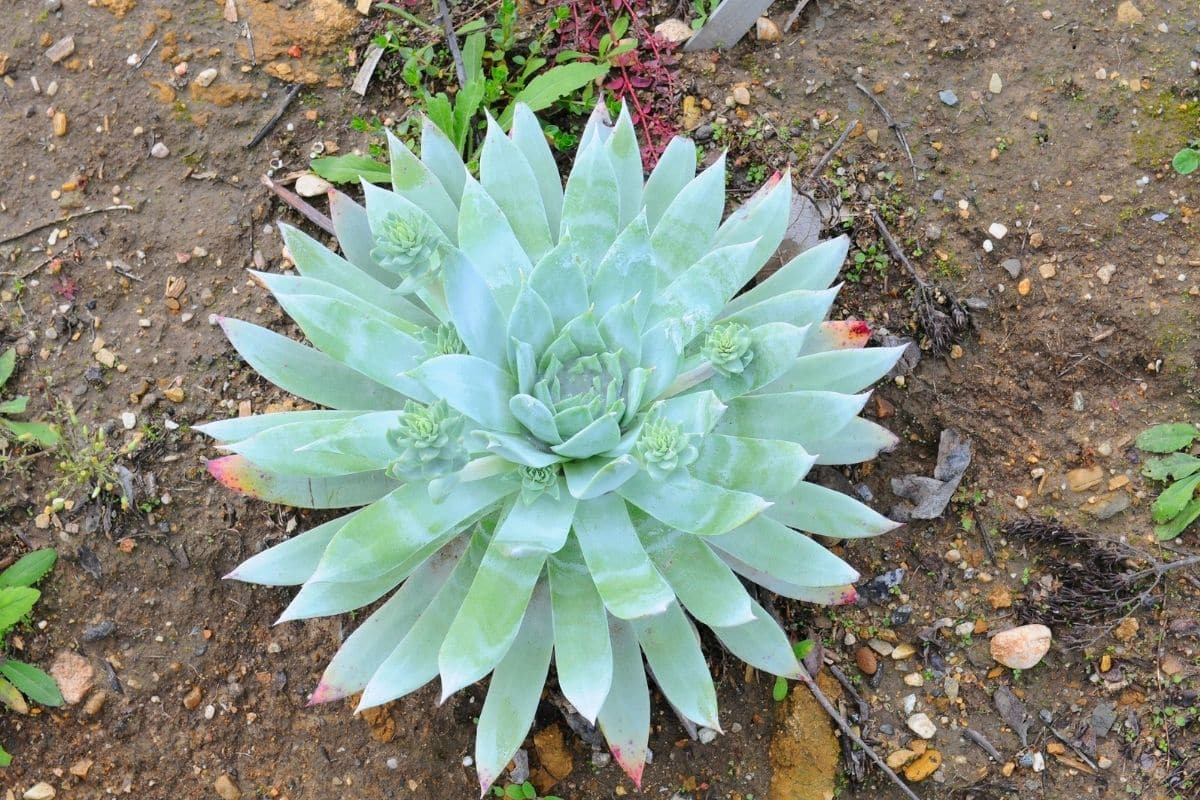 There are around 50 species of Dudleyas that are commonly found in California and Mexico. These plants grow in rocky outcrops in arid regions and are found nowhere else in the world.

Dudleyas are tough little plants that are superbly climatized to living in areas with hot, dry summers and mild winters. They grow quite slowly and some species are known to live for 100 years.

Many of these plants have succulent leaves that are arranged in rosettes. In some species, the leaves have a gray-blue waxy coating. This helps the leaves to retain water and also protects them from sunburn. Other plants in this species are branching. These develop numerous rosettes that spread. This makes them ideal as groundcovers along borders.

It’s common in the summertime for the leaves to shrivel up a little as the plant goes into a dormant state and tries to conserve water waiting for the next shower of rain. Once the rains come, the plants will start to flower in the following spring and summer. At this time, long flower stalks will emerge from the center of the rosettes. On these flower stalks, you’ll find a multitude of five-petaled flowers in a variety of colors.

The Dudleya group of succulents was named after William Russel Dudley, a botanist and the first head of the botany department at Stanford University.

Interestingly, this group of plants was first included in the Echeveria genus. However, after some DNA analysis, it was concluded that these plants were descendants of a different common ancestor.

How to Plant and Grow Dudleya

Dudleyas are ideal as pot plants and can be grown indoors as long as they get plenty of light. They’re slow-growers, so you won’t need to repot them very often. In fact, these plants adapt well to the containers that they’re grown in. They will remain small if grown in a small pot but will grow larger if you transplant them into a bigger pot.

If you live in an area that experiences only mild winters and hot summers, you can also grow these liveforever plants outdoors. You just need to ensure that your soil has really good drainage as these plants won’t survive in waterlogged conditions.

How to Propagate Dudleya

Here’s what to do:

Dudleyas are surprisingly easy to care for and will generally thrive on neglect. After all, in their native habitats, they can live for up to 100 years. They’re commonly called “Live Forever” for precisely this reason.

Just one thing that you should remember. The grayish waxy coating on the leaves is the plant’s protection against sunburn and other damage. Therefore, try to avoid touching the leaves if you can as you might accidentally rub this coating off. This will result in scars developing or the leaves becoming discolored.

Dudleyas need to be planted in coarse, gritty soil that has exceptionally good drainage. If you plan to grow this plant in a pot, you can use a commercial succulent or cactus mix quite successfully.

Being succulents, these plants require excellent drainage and it’s important not to overwater them. They do like regular watering during their main growth period which is usually in fall right through to spring.

During summer, the liveforevers generally become dormant and will need less water. In fact, it’s common during this time for the leaves to shrivel up a little. But don’t be concerned because this is a natural condition and the leaves will plump up again as soon as it rains and the temperatures are cooler.

If you’re growing your Dudleyas in pots, make sure that the pots have plenty of drainage holes and that the excess water can easily drain away after you’ve given your plants a drink.

Dudleyas only require an application of weak liquid fertilizer twice a year. Once in spring and once in the fall.

These plants need plenty of light to grow successfully. They prefer to grow in full sun in coastal areas and are also salt-tolerant. If you live further inland and want to grow these plants outdoors, it’s a good idea to give them a little protection from the sun in the hottest parts of the day.

If you’re growing your Dudleya indoors, make sure that you place it near a bright window that lets in lots of light. These plants don’t do well in low-light conditions. If your home does not receive enough bright light during the colder months, you will need to invest in a grow light for these plants.

Dudleya succulents prefer a temperate climate. They enjoy warm, dry summers and cool winters with some rainfall. Because they naturally grow mostly along the coastline, they do appreciate slightly lower summer temperatures than hotter inland areas. For this reason, you should give your plants some protection from the afternoon sun if you do live in an area that has very hot summer days.

On the other hand, these plants are generally not frost-tolerant. Therefore, it’s best to bring your Dudleyas indoors if there’s a likelihood of a freeze.

Ideal temperatures for this plant are between 65 and 77 degrees Fahrenheit (18 to 25 degrees Celsius).

The most common pests that attack Dudleyas are aphids and mealybugs. These sap-sucking insects can sometimes be hard to spot because they hide inside the rosettes. If the leaves of your plant start to look a little distorted, it’s a sure sign that you have a pest problem.

A spray bottle filled with a mixture of insecticidal soap and water should help to control these pests. Alternatively, you could use a mixture of neem oil and water to spray the plant with.

When grown outdoors, the soft, succulent leaves may also attract slugs and snails. However, if your plants have a fairly dry environment, these pests won’t be as prevalent and you can easily remove them by hand if you spot any.

These plants are also prone to fungal diseases both above ground and on their roots. For this reason, it’s important not to allow water to sit inside the rosettes as this will lead to rot. When grown outdoors, it’s a good idea to tilt the plant slightly so that the water can drain away easily when it rains. For plants grown in pots, make sure that you only water the soil and avoid getting any water onto the leaves of the plant.

Both the leaves and stems of the species Dudleya edulis are edible. It’s also commonly called Mission lettuce. The fleshy leaves are considered a delicacy and the stems are slightly sweet and quite refreshing to chew. However, they do leave a chalky aftertaste in the mouth.

The leaves of Dudleya pulverulenta are also edible and this plant is also commonly called Chalk lettuce. The indigenous Kumeyaay tribes commonly used the leaves on this plant as food. They also made a decoction from the roots of the plant to treat asthma.

Dudleyas are also great for using in landscape plantings if you live in an area with mild winters. They are excellent for rockeries and desert gardens because they require very little care and will withstand long dry periods.

There are around 50 species and types of Dudleya that grow naturally with some of them becoming endangered. It is illegal to take these plants from their native habitat. However, some species are being cultivated commercially and are available for home gardeners and succulent lovers to purchase.

Here are just a few of the species:

Dudleya succulent plants are extremely hardy plants to grow and many species will thrive on neglect. They’re great for growing in coastal gardens where the soil is well-drained and areas that don’t receive frost.

They also make ideal specimens for growing in pots as long as you’re able to give the plant plenty of bright light all year round.

For more succulents to grow, check our list of succulents.