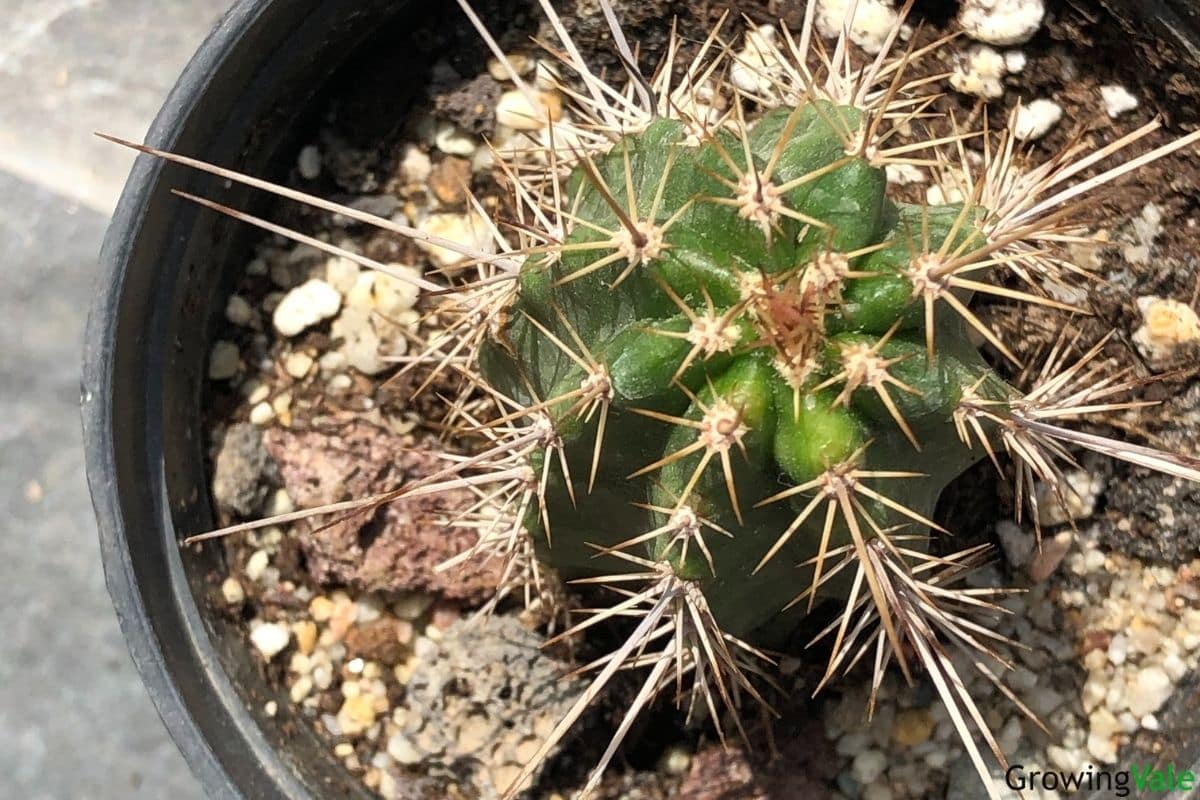 Claret cup cactus is one of the easiest cacti to grow. This plant is mostly grown for its spectacular flowers that adorn the plant during spring and summer. Depending on the variety, these flowers can range slightly in color but most are bright orange to red.

Claret cup cacti are low-growing Echinocereus cacti but they will form large clumps that can be around three to four feet across. The stems of the cactus can be highly variable with some having multiple spines while others can be completely spineless.

Here are the top 7 echinocereus triglochidiatus varieties that we’ve come across.

This is one of the predominantly spineless varieties as “inermis” means unarmed. However, you might find that some of the wooly areoles do have one or more very short spikes.

On this plant, the flower buds actually emerge through the skin of the cactus stem just above an areole. Once the flowers have finished, their appearance leaves a scar on the stem.

The flowers are large and waxy. They are generally red or orange and have a green stigma in the center.

Similar to Echinocereus triglochidiatus var. inermis, this variety has flowers that burst through the skin of the cactus just above an areole. The flowers are also large and waxy and orange or red in color with a green stigma.

This variety grows in the Arches National Park in Utah. “Melancanthus” means black spine, although the spines turn a gray color as they age. This cactus also forms large clumps and is spectacular when in flower.

The flowers are large, showy, and red with a green stigma. The fruits are large and either dry or fleshy with many seeds.

This variety mostly grows in the western part of the Mojave desert. It is usually heavily spined with numerous spines emerging from each areole. However, there have been some instances where this variety has been spotted without spines. Its common name is Mojave hedgehog.

This is an erect, cylindrical cactus with a solitary, pale-colored, twisted central spine. In its native habitat, this cactus often forms large clumps that can have more than a hundred heads.

The flowers on this variety are narrow and funnel-shaped. They are usually red to orange in color. After flowering, the plant produces oblong or cylindrical fruit that can be green, yellow-green, and red when ripe. The fruit has spines but these drop off. The pulp inside the fruit is white, juicy, and edible.

As the name would suggest, this is a mostly spineless variety of the Mojave hedgehog cactus. It can, however, have a few small, short spines growing from the wooly areoles. This variety is mostly found in the mountains of western Colorado and eastern Utah.

Like other claret cup cacti, this variety will form large clumps with masses of flowers when in bloom. The flowers are orange to red, waxy, and have a green stigma. The plant also produces fleshy fruits that are red when ripe, juicy, and edible.

This cactus is widely available from nurseries and commercial cactus growers. It’s a cespitose cactus which means that it grows in dense, mat-like clumps similar to moss. Each clump has many simple joints up to 50 per clump.

Some of the common names of this variety include Marshall strawberry cactus and claret cup cactus. The flowers on this species are smaller, usually red, and will remain open for several days. The plant also produces smooth, round, red fruits that are spineless when ripe.

This species is a nursery-produced cultivar with the stem being variegated in dark green and yellow. Its common name is variegated claret cup hedgehog. This is also a clumping cactus and can vary quite a lot as to whether it has dense spines or no spines at all.

The flowers on this variety are funnel-shaped and bright orange to dark red. The flowers can sometimes have yellow or white bases with anthers that are pink to purple. The fruits are juicy and have deciduous spines. They are also edible.

Check our list of cactus plants you can grow for more.