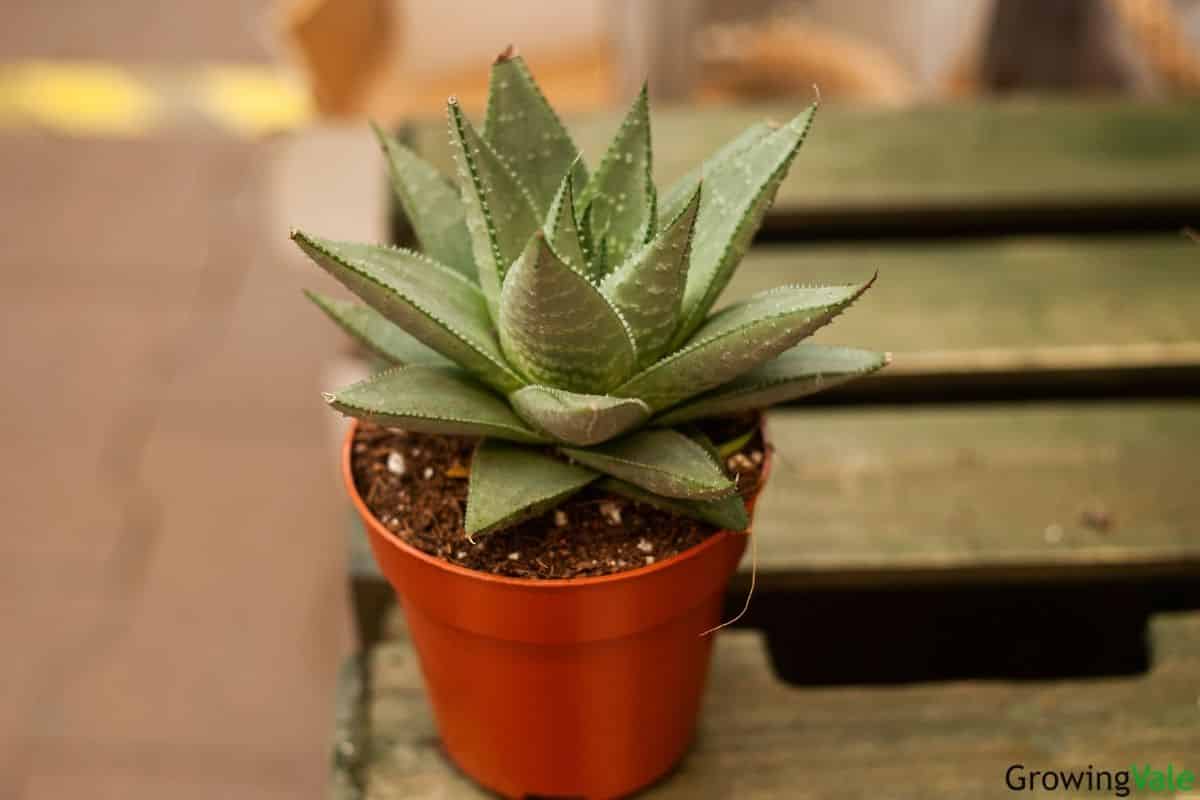 Gasteraloe succulents are delightful plants that will add a little color and interest to your collection. It’s believed that these plants originated in South Africa and are a hybrid mix between Aloe and Gasteria succulent.

These hybrid plants have the same pretty rosette structure as aloe and thick fleshy leaves that hold moisture. These are generally speckled or striped and have a sharp point at the tip and toothed edges.

These plants are surprisingly easy to take care of and only need water when the soil has dried out. This is definitely one plant that thrives on neglect and can be killed with kindness.

Because Gasteraloe is a hybrid, there are only a few cultivars that may be available commercially. Here are just a few that we found.

This attractive succulent forms rosettes of triangular-shaped leaves that are normally dark green in color. These leaves are covered with white spots that are actually tubercles (small, rounded projections).

This plant can grow to a height of 10 inches (25 cm). This makes it ideal for growing in containers. Flowers are borne on long stems that rise above the center of the rosette.

This cultivar has open rosettes with triangular-shaped leaves that are quite broad at their widest point. These leaves are dark green on top and olive green underneath. They are covered with white tubercles.

The toothed edges of the leaves have a reddish-brown tinge.

This is a slow-growing succulent that can reach a height of 12 inches (30 cm). It forms quite dense rosettes of rich green leaves. These leaves are also speckled with white.

The flowers on this succulent are cylindrical and orange-red in color. They appear on long inflorescence spikes from the center of each rosette.

This is one of the more outstanding cultivars. It grows in symmetrical rosettes. The very thick, succulent leaves are dark green in the center with white speckles. The outer edges of these are striped with white. This appears like a white border around the edges of each leaf.

As one of the larger growing succulents in this genus, the rosettes can reach a diameter of around 12 inches (30cm). The flowers grow at the tips of thick reddish-brown stems that arise from the center of each rosette.

This cultivar has open rosettes formed by thick and fleshy leaves that are a dusty green to gray color and covered with whitish speckles. The older leaves have a tendency to turn downward at the tip end on more mature plants.

Gasteraloe ‘Marble Queen’ is a little different from the other cultivars in that it has pale green leaves with dark green swirly stripes giving the leaves a marbled effect. These are triangular-shaped and form quite flat and open rosettes.

Interestingly, this species was first named in 1908 by German botanist, Alwin Berger who named the plant Aloe rebutii. Later, in 1930, the plant was renamed by US botanist, Eric Walther. However, to date, the botanical name is still not officially recognized.

From what we can find out, the plant is unlike many of the other Gasteraloe species in that it has long, thin strappy leaves that only loosely form rosettes. These leaves are dark green in color with faint white speckles. They are not as thick as the leaves on most other Gasteraloe cultivars.

This is an amazing-looking succulent that has tallish triangular leaves that form rosettes. The leaves are bright green in color with light green to white speckles. These speckles are tubercles that give the plant a warty appearance.

The flowers are tubular and bloom in late spring and early summer. They are orange-red in color.