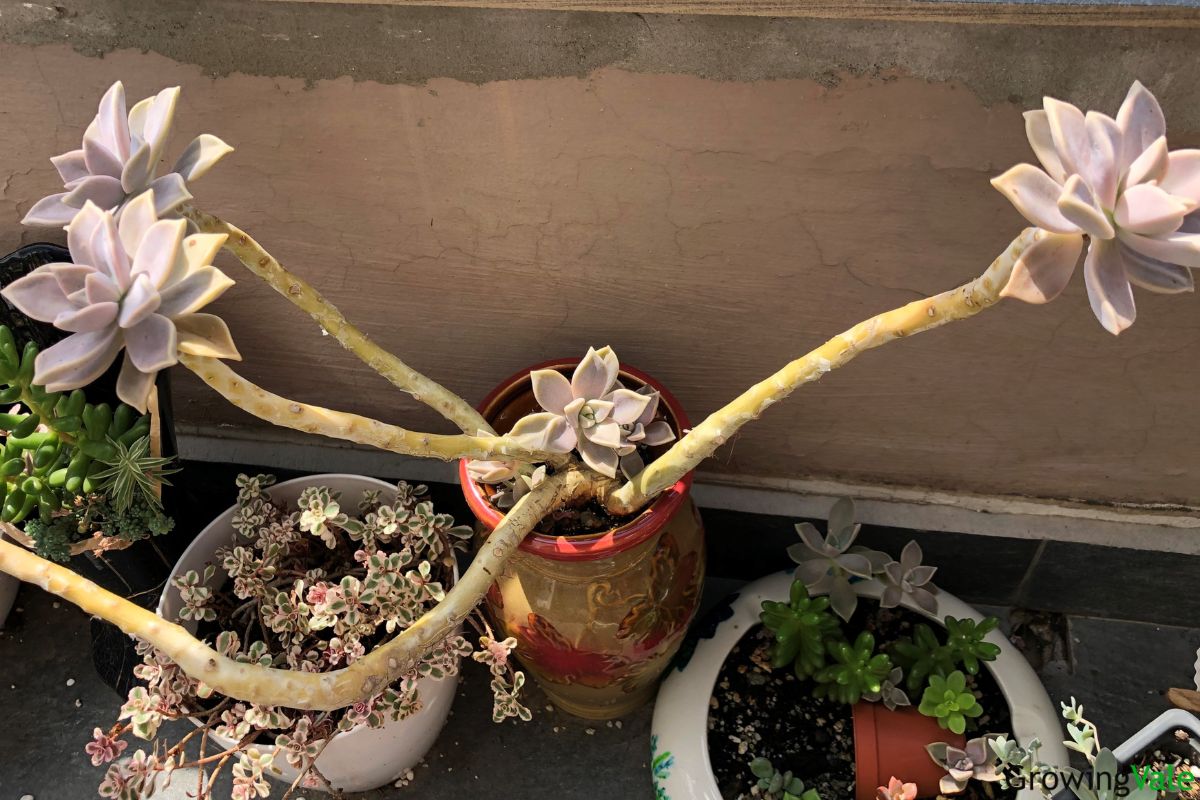 The ghost plant (Graptopetalum paraguayense) is a lovely succulent that is easy to grow and has the most delightful structure.

The plant starts as a symmetrically-perfect rosette and then produces short to longer stems on which further rosettes form. This allows the plant to take on a somewhat trailing appearance.

There are a couple of natural varieties of this lovely plant, including a variegated one and numerous cultivars or hybrids that commercial growers have developed over the years by crossing this species with another similar one.

Here’s a selection of 12 ghost plant types and cultivars that we’ve found.

This is a natural variegated form of the original species. Instead of the leaves being just the one shade of blue-gray, each leaf has purple and cream margins. There can be a wide variance in the amount of variegation that appears on different rosettes on the same plant.

In fact, on some plants, the rosettes may have some pure purple leaves while others are blue-gray with cream margins. This translates to what can be quite a colorful and attractive plant, especially as the color of the leaves changes with the different seasons.

This is another natural variation of the Graptopetalum paraguayense. It’s a much smaller plant with individual leaves reaching a length of only 1.6 inches (4cm).

The coloring on this variety is also slightly different. Instead of having blue-gray leaves, this subspecies has yellowish-green leaves. These can portray the same kind of pink tinges when the plant is under stress such as being exposed to cold or very dry conditions.

This is a delightful little cultivar that forms small rosettes on quite longish stems. The leaves are pastel-colored in shades of cream and pink and are quite thick compared to other cultivars and hybrids.

Each rosette only reaches a diameter of around 4 inches (10 cm).

This hybrid is somewhat similar to ‘Victor Kane’ except the leaves are not as thick. Also, the leaves tend to be a pale gray color with tinges of pink.  But, depending on the season, it can be difficult to tell these two hybrids apart.

The subspecies xGraptosedum is a cultivated hybrid cross between two genera: Graptopetalum and Sedum.

As the name would suggest, this lovely cultivar has mainly bronze-colored leaves. It’s a hybrid cross between Graptopetalum paraguayense and Sedum stahlii. The leaves have a tendency to whorl around the growing stems culminating in a rosette at the end. They are flat on the top and have a fleshy keel underneath.

Unlike a lot of the other species, cultivars, or hybrids of Graptopetalum paraguayense, the lower leaves have a tendency to remain on the long stems rather than fall off. The dainty flowers have 4 petals and are yellow in color.

This plant is the result of a hybrid cross between Graptopetalum paraguayense and Sedum pachyphyllum. The leaves on this cultivar are quite fleshy and much more rounded but still have a pointed tip. The stems are longer on this plant and have a tendency to trail.

The rosettes grow on the ends of these stems and can reach a diameter of 5 inches (12.5 cm). The leaves are the familiar blue-gray but can change color with the change of the seasons. The dainty star-shaped flowers are yellow.

As the name would suggest, this cultivar has lovely orange-tipped leaves while the younger leaves are tipped with a rosy-pink color. This particular cultivar is a hybrid cross between Graptopetalum paraguayense and Sedum adolphi.

The plant does produce stems that have rosettes on the ends. The flowers of this species are white.

xGraptoveria is a subspecies that has been created by crossing certain species of Graptopetalum with certain Echeveria species. The resultant plants are all hybrids and do not occur naturally.

This particular species is a hybrid between Graptopetalum paraguayense and Echeveria ‘Rubella’. It has pale green to blue-green leaves that form small rosettes. These can reach a diameter of 6 inches (15 cm).  It will produce dainty yellow-pink flowers.

This particular species has the tendency to freely produce offsets resulting in dense mounds.

This cultivar resulted from a hybrid cross between Graptopetalum paraguayense and Echeveria amoena. This has produced a plant with leaves that are more glaucous and form larger rosettes than some of the other species.

The leaves can vary a little in color being blue-green when young and taking on a more pinkish-brown appearance as they age. The dainty flowers are usually yellow and some may have red dots.

This lovely succulent was produced by crossing Graptopetalum paraguayense and Echeveria derenbergii. This has created the sweetest little succulent with thick, fleshy spoon-shaped leaves that form diminutive rosettes. These rosettes reach a diameter of around 3 inches (7.5 cm).

The plant forms numerous creeping stems with rosettes on the end. This enables the succulent to form quite dense carpets when given the space to spread. The leaves are a pale blue-gray color with pinkish tips in cooler temperatures.

This attractive cultivar is a hybrid cross between Graptopetalum paraguayense and Echeveria gigantea. It’s a clump-forming succulent with stemless rosettes. The leaves are quite thick and often colored apricot to pink when grown in full sun. However, when grown in shade, the leaves are bluer.

The flowers on this cultivar are also pink.

This lovely cultivar produces larger rosettes that can reach a diameter of 12 inches (30 cm). It’s a hybrid cross between Gratopetalum paraguayense and Echeveria gibbiflora. The leaves are quite broad and waxy and in shades of purple, bronze, and blue-green.

The flowers on this variety are pale yellow and sometimes have red spots. There is also a variegated form of this species called xGraptoveria ‘Fred Ives Variegata’.

In addition, another species has been created called xGraptoveria ‘Fred Ives Cristata’. This is simply a crested form of xGraptoveria ‘Fred Ives’. This means that the leaves form a tight crest on top of a ‘trunk’. The leaves in this variety are smaller and can change in color from bronze to blue-green or purplish-yellow with the seasons.