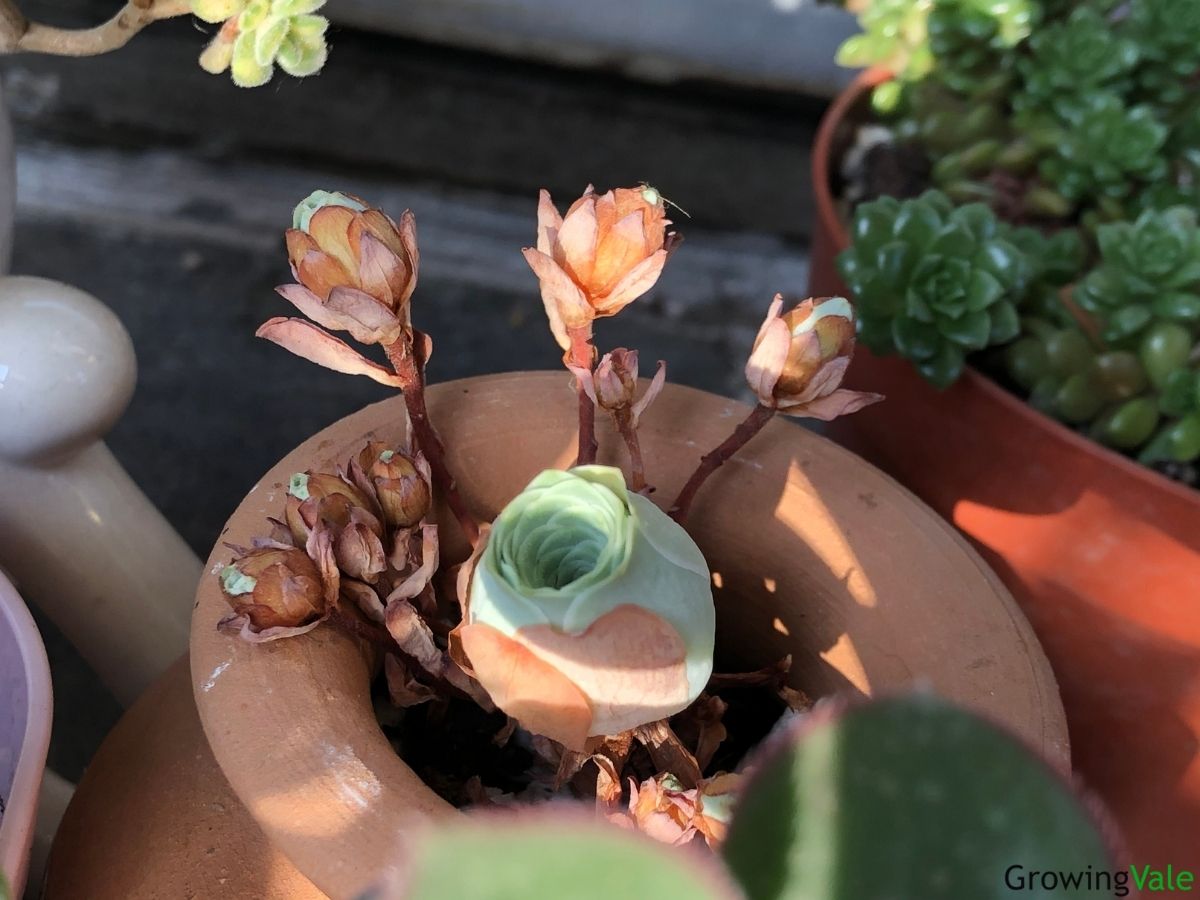 Sometimes, the leaf forms of succulents can make them look uncannily like flowers. Some would even say that the actual plant is more attractive than its very blooms. This rings true with Greenovia succulents, which resemble rosebuds and fully bloomed roses! If you’d like to give someone a rose-shaped succulent that can outlive actual roses, look no further.

Greenovia species and their cultivars are small perennial plants that are best cultivated outdoors. Indoor cultivation is also possible, though the best results are obtained with a touch of the elements. Moreover, growing this plant in a sunny garden with ample ventilation will bring out its best features!

Greenovia succulents are native to the Canary Islands (Gran Canarias), a Spanish archipelago close to the northwestern coast of Africa. The climate is quite agreeable in these islands, with rain showers occurring sparingly and briefly throughout the year. For this reason, the species under this genus are fairly tolerant of seasonal droughts.

In the wild, Greenovia succulent tends to be found in rocky crevices and with cliff faces. They can also grow in coniferous forests and may be found perched along the edges of canyons. Due to their attractive leaf orientation, they are now widely cultivated in greenhouses and plant nurseries all over the world.

Greenovia species are usually distinguished by their glaucous leaves. These are distributed around the shoot very densely, enough to cover most of the surface area of underlying leaves. Depending on sun exposure and cultivar, foliage color ranges from bright green to blue-green to light pink. Mother plants readily produce profusions of offsets, but unfortunately tend to perish after flowering as they are monocarpic.

Note that this genus can often be confused with Aeonium, as the two are usually lumped together or classified as one succulent type. Greenovias are different as their rosettes have a more whorled, compact shape. They can appear egg-like in dormancy.

How to Plant and Grow Greenovia

As Greenovia succulents produce flowers infrequently, they are seldom planted via seed. Instead, gardeners have more success increasing Greenovia populations through plant divisions and cuttings. Unlike many temperate plants, these rose succulents have growth periods that take place during winter and spring. They usually grow dormant in summer, when water is sparse.

As temperatures rise in summer, Greenovia rosettes may close up. The outer leaves may gradually grow brown and wilt. This is a completely normal response to drought conditions and does not necessarily mean that the roots are dying. The rosette will expand once more in fall, during which you may remove any dead or wilting leaves that are still attached to the main plant.

Considering these growth trends, it would be best to plant Greenovia divisions after summer, when temperatures begin to drop and the plant exits dormancy. For best results, make use of porous pots, such as terra cotta ones, that are slightly wider than the rosettes. Keep in mind that once the rosette matures, it will begin to produce offsets that can crowd out the pot.

Greenovia succulents are best propagated with the use of offsets. It can take years for a plant to mature and begin to produce them. You can be certain that the wait will be rewarding, however, as this genus is known for not holding back when it comes to self-propagation. As many as a dozen offsets can arise from a single mother plant.

Use a sharp, sterilized blade or cutting shears to separate Greenovia offsets from the mother plant. You may need to uproot the entire pot beforehand to gain a clear view of the root structures and shoots. Offsets would ideally have their own young root systems, so try to keep these intact. Allow any exposed tissues to callous over prior to repotting the mother plant and planting each division.

Try to refrain from separating offsets when their rosettes are less than an inch in diameter. Those that are too small can fail to re-establish themselves under suboptimal conditions. Keep in mind that this succulent is relatively rare, so you’ll want to take really good care of those divisions!

Plant the calloused offsets in a few inches of soil and place them in an area with filtered or partial sunlight. Once they have generated new roots and the rosettes begin to expand, they can be watered and moved to a slightly more exposed area. Though Greenovia species can withstand droughts, make sure that the growing offsets are provided with just enough moisture so that they do not dry out during the growing period.

To successfully cultivate mountain rose succulents, they must be grown in a no-fuss well-draining soil mix. Avoid adding any elements that may impede water evaporation or trap excess moisture. This means that coconut peat, coconut coir, peat moss, and additional soil toppings should not be used.

Keep in mind that Greenovia succulents prefer dry soil. The more porous the mixture, the better. Store-bought cacti and succulent soil mix should work well, but consider adding perlite or pumice to the mix. These can help hasten soil drying times, especially during periods of high humidity.

Avoid using fine substrates, such as clay or typical garden soil to the potting mix. Inorganic additives, such as grit sand or crushed lava can also improve drainage. You may add compost to increase the nutrient profile of the soil, but just a small amount should suffice.

Greenovia succulents will appreciate generous watering sessions throughout their growth period. If the plant is located in a well-ventilated outdoor area, the soil can be soaked thoroughly during each watering session. Make sure the soil is totally dry prior to watering the plant. During winter, the soil may understandably take much longer to dry, so you may have to reduce watering times.

Although Greenovia rosettes grow dormant as temperatures peak in the wild, the period of dormancy can actually be overridden in captive conditions. If the rosettes are not fully exposed to sunlight through summer, they may remain in their growth phase and should thus be provided with water. Regular watering periods may also help circumvent the resting phase, allowing the plant to grow quicker within the span of a single year.

If you notice that your rosettes have fully closed up, it means they have grown dormant and will not require water. Refrain from overwatering Greenovia succulents to prevent the occurence of root rot and other fungal diseases.

Always apply water directly onto the substrate instead of on the Greenovia rosette itself. Moisture that is trapped in between the densely packed leaves can attract pests and cause mold to grow.

Greenovia rosettes that are grown outdoors in pots or planted directly on the ground will rarely need fertilizer. They can grow in poor shallow soils, just as they do in the wild. They may benefit from a very small amount of fertilizer during the growth phase (winter-spring), however.

Make sure to use very conservative concentrations of a broad spectrum liquid fertilizer during your watering session. You can also use slow-release fertilizers, but limit the amount of capsules you mix into or place on top of the soil to just half the recommended amount.

Those that have entered a dormant phase should not be provided with fertilizer as they won’t be able to take up nutrients from the soil.

When fully exposed to intense summer light, Greenovia rosettes protect their young leaves by closing up. The outer leaves may end up scorched and will gradually wilt over time. Plants that are acclimated to full sunlight can withstand these extreme conditions, but those that are purchased from indoor plant nurseries may suffer from full exposure.

Although mountain rose succulents benefit from being reared outdoors, try to place them in an area that is protected from overexposure. They should ideally be cast in partial shade during the hottest part of the day. Place your pots in an area that receives morning, instead of midday or afternoon, sun exposure. This plant can also be grown under indoor or artificial lights.

Unlike many other succulent types, the green foliage of Greenovia doesn’t tend to become purple or pink due to sun stress. There’s just one cultivar, pink mountain rose (Greenovia aurea ‘El Hierro’), that may develop blush-colored foliage through dormancy, and it is quite rare.

Just as they are sensitive to extreme sunlight and heat, Greenovia succulents can suffer from the cold and high humidity. They can withstand winter conditions only in hardiness zones where temperatures don’t drop to below 35F. Their thin leaves and root systems are not built to withstand frost, especially as they are active through winter.

The best temperature range for most Greenovia cultivars is 65-75F (18-24C). Outdoor temperatures that exceed 95F (35C) will induce aestivation, forcing the outer leaves to curl in an effort to conserve water. Mature plants will surely enter their dormant phase at this stage. In contrast, temperatures below 32F (0C) can kill the plant.

If temperatures in your area go beyond the aforementioned extreme values, you will have to take your plant indoors. If located in hardiness zones with harsh winters, your Greenovia succulents should be placed in a temperature-regulated space. You may also need a dehumidifier as this plant prefers dry climates.

Greenovia succulents are relatively short plants that will rarely have to be pruned. You should only consider cutting off shoots or offsets if they have either overgrown your pot and need to be propagated or if they carry transmissible diseases.

For best results, Greenovia rosettes will need to be repotted every 2-3 years or whenever they have outgrown their pots. Those that have compromised root systems or moldy soil will also need repotting once their root systems are treated.

Prior to repotting, try to evaluate if your Greenovia would benefit from having its offsets removed. A mother plant may generate more offsets in the next growth period if young plants are separated from its shoot system.

When repotting single rosettes, make sure to choose a pot that can accommodate plant expansion or new growths. Place the newly repotted plant in an area that is properly protected from the elements, at least until the rose succulent has re-established itself in the new soil.

Most Greenovia pests and diseases are brought about by improper cultivation practices, such as overwatering the soil, allowing moisture to get trapped in between the leaves, exposure to high humidity, and non-isolation of infected plants. Root rot is the most frequent issue, and will have to be resolved by uprooting the entire plant, removing any decayed parts, and repotting the plant in fresh, well-draining soil.

Another common issue is the growth of mold in between the compactly arranged leaves. The weakened leaves will attract more pests (e.g. aphids, spider mites, mealy bugs, scales), which will have to manually be removed before they spread to the rest of the plant. In case of severe infestations, consider using organic pesticides or fungicides with neem oil to help protect the roots.

Greenovia rosettes are often used as ornamental or decorative succulents due to their rose-like appearance. Bouquets of these green roses are now a trend as they are long-lived and retain their color. Single potted rosettes also make great gifts to loved ones.

Officially, there are four Greenovia species. They each have their own cultivars and vary slightly based on rosette formation, leaf orientation, size, and color. These species are as follows:

The unique appearance of Greenovia has earned its fame and widespread adoration in the social media community. It is fittingly referred to as ‘mountain rose’ or ‘rose succulent’. If the leaves of these rose-looking succulents weren’t green, the untrained eye would be hard-pressed to tell the difference between the typical rose and the rosettes of this genus. If you’d like to give someone a rose that “never dies” (with proper care, of course), this succulent would be a wise choice.