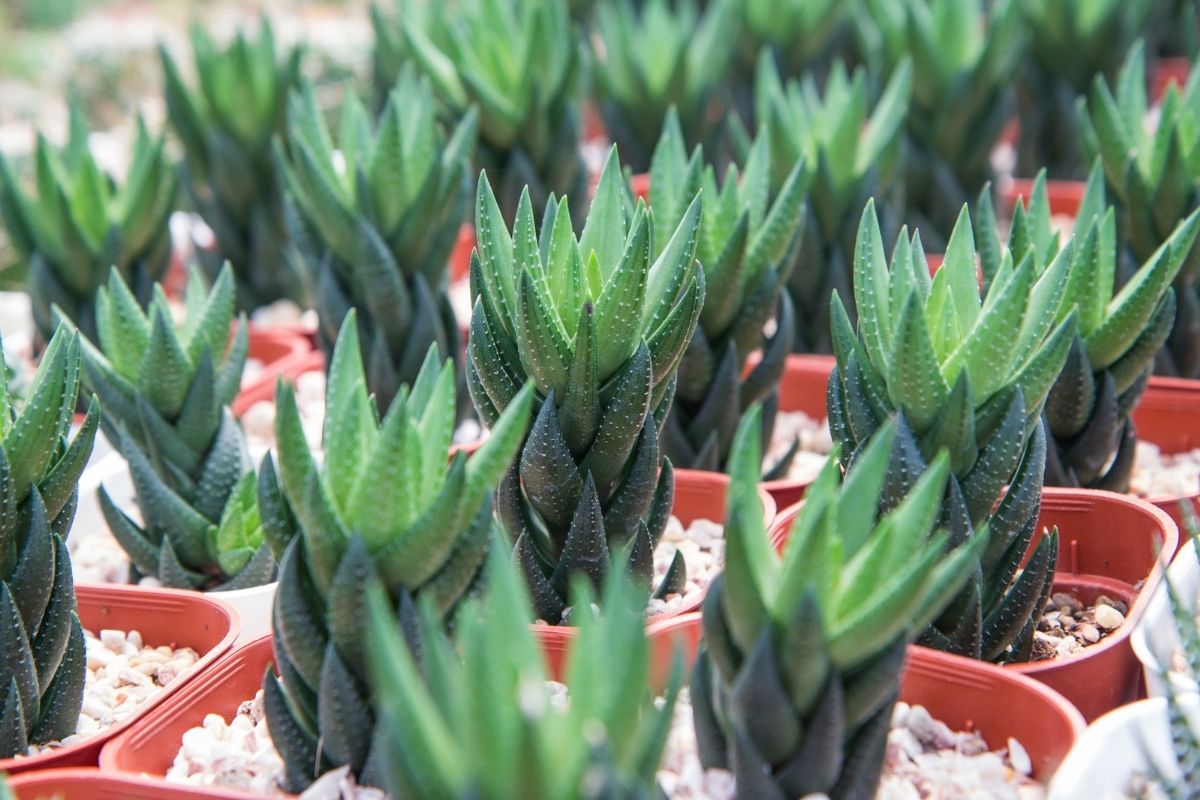 Frustrated by Haworthias that never quite grow tall? You’ve come to the right place as this adorable species forms upright rosettes that can grow as tall as 8 inches.

Haworthia coarctata is a stemmed succulent plant with tough and compactly arranged foliage. These are spotted with white tubercles, similar to those found on the zebra Haworthias (H. fasciata and H. attenuata), except they are circular instead of elongated.

H. coarctata is a perennial species that actively grows through spring and summer. Its bloom stalks may arise even in early fall, as long as temperatures are optimal. The leaves are tough and green to start, but they may eventually become more purple-red due to sun stress. This creates a pretty gradient of color along the length of each stem.

H. coarctata was recently reclassified under the genus Haworthiopsis, though it is still widely regarded as a Haworthia plant. It is often confused with H. reinwardtii, a close cousin that has a similar growth form. The main differences between the two species are their leaf density, thickness, and tubercle shape. H. reinwardtii has thinner and compact leaves with elongated tubercles.

Native to the Eastern Cape Province of South Africa, H. coarctata tends to produce large clumps in the wild. Its robust rosettes are normally found growing among rocks.

H. coarctata should be planted in a well-draining medium and in pots with drain holes on the bottom. It can also be planted directly into the ground in areas with arid or desert-like conditions. Seeds, stem divisions, and offsets can be used to enlarge a colony. Using stem divisions is the fastest way to cultivate more individuals.

How to Propagate Haworthia coarctata

Mature plants will readily produce rooted offsets each year. If your plant fails to do so, you can divide long stems into three of four sections. The bottommost part can be left in the pot, whereas the other cuttings must be allowed to callous over completely.

Plant these in an upright position. Once they are established and have produced new roots, their stems should branch out to produce new pups. The topmost division will grow normally, lengthening in height, but it may also begin to branch out.

H. coarctata requires a well-draining substrate as trapped moisture can lead to root disorders. A soil mix formulated for succulents and cacti would work best.

Use the “soak and dry” technique when watering this plant. Directly apply water to the soil surface, and not on the rosette itself as moisture can get trapped in between the leaves. During exceedingly hot summers and cold winters, H. coarctata may grow dormant. Water the plant sparingly during these periods.

Only provide fertilizer during the plant’s active growth period. Avoid using high concentration fertilizers as these can scorch the roots of the plant.

Partial shade is best for this species, but it may require more intense sun to bring out its best colors. At least 6 hours of filtered sunlight through a window should be sufficient.

Like other desert succulents, this species can withstand hot summers and cool winters. It can become compromised if exposed to temperatures below 30F for too long. Humidity is normally not an issue for H. coarctata.

If the upright rosettes grow too tall or heavy, you may cut down the stems and propagate them. It can take years for the plant to reach an unmanageable height.

Take the opportunity to repot H. coarctata rosettes whenever you obtain cuttings or prune the plant. This should be done at least once every 2-3 years to refresh the root system.

H. coarctata does not easily succumb to pests but may suffer due to root rot. Water accumulation between the leaves may also attract mealybugs. Always let the soil dry out between watering periods and place the plant in a well-ventilated area.

As this species can grow relatively tall, its rosettes can add dimension to succulent arrangements. It is chiefly cultivated for its ornamental value.

Haworthia varieties and cultivars tend to have varied leaf lengths and textures. The most popular ones are listed below.

H. coarctata can add some much needed height to your Haworthia collection. If you love propagating succulents, definitely go for this easy-to-divide species.