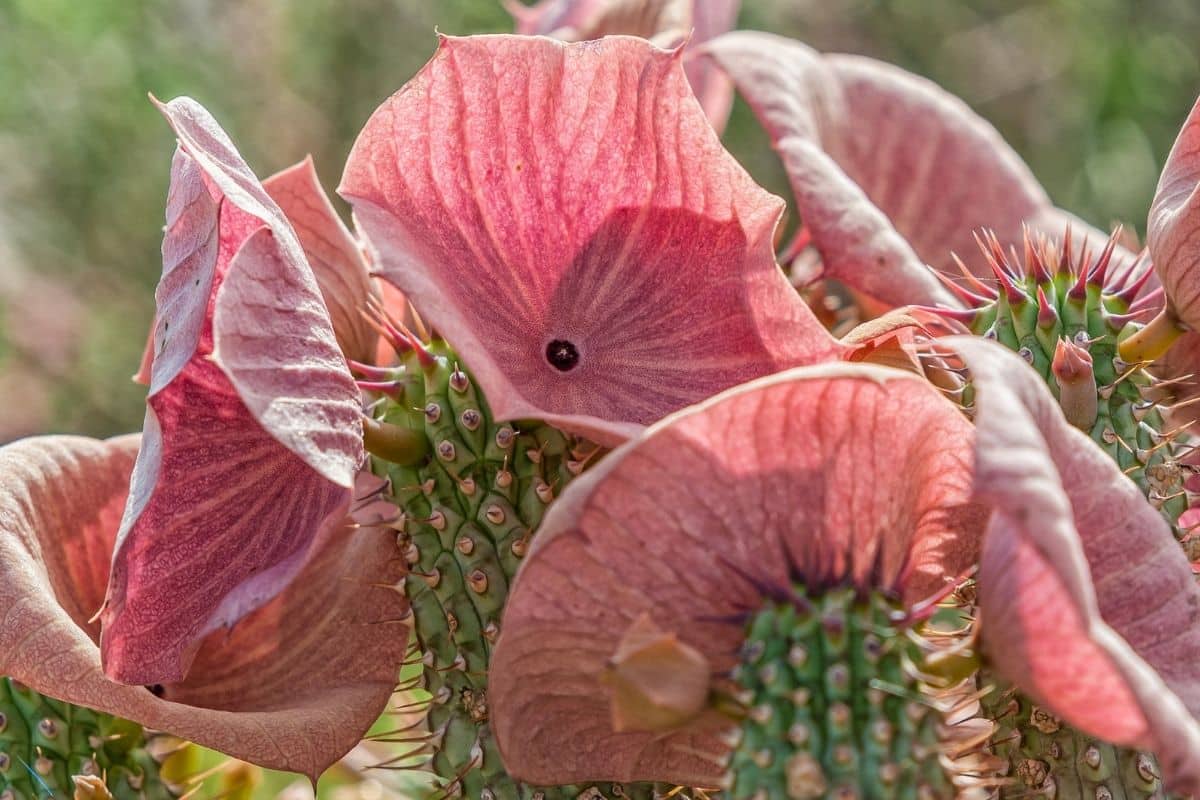 Hoodia are fantastic succulents that are often mistaken as cacti due to their growth forms. Instead of producing slender shoots with fleshy leaves, they grow as enlarged columnar stems that are covered in spikes. This adaptation has allowed them to thrive in a harsh desert environment. Ornamental varieties are best grown outdoors as sunlight is important to their health and survival.

Native to the southwestern reaches of Africa, Hoodia succulents require a well-draining substrate and are averse to excess moisture. Their roots are accustomed to long periods of drought. Just a few inches of rainfall each year are enough to sustain the plant and encourage the production of spring to summer blooms.

The Hoodia species below tend to differ in terms of height, stem diameter, spread, bloom size, and bloom color. Some of them are in demand due to their pharmacological properties, which are controversially associated with appetite suppression and weight loss.

As a result, trade regulations may restrict the importation of some species. Make sure to acquire your Hoodia succulents from reputable plant nurseries.

The Hoodia gordonii species is the most popular among Hoodia succulents due to the therapeutic effects of its extract. Commonly known as Kalahari cactus or bushman’s hat, H. gordonii is traditionally used as a folk medicine to help tribesmen cope with indigestion, infections, and hunger. It has become threatened in the wild due to its sudden popularity as a source of weight loss inducers.

Apart from its appeal as a medicinal plant, H. gordonii has stunning features that make it a desirable addition to every succulent collection. Its muted green stems can grow to a meter in height and produce a profusion of branches. In cultivation, it can live for up to 25 years, during which its branches can be propagated to produce new plants.

This Hoodia enters a period of dormancy in winter, after which it produces flowers in spring. The light brown to pinkish-tan blooms have a surprising quality – they smell like rotten meat! This makes them highly effective at attracting flies, which serve as the primary pollinators.

H. officinalis is the most widely distributed among the Hoodia succulents. It has several subspecies that occur in just a handful of locations. Its spiny stems, which grow to a height of 30-40 cm, are typically found growing alongside bushes on desert slopes and stony hills. In these areas, the plant must deal with harsh conditions such as sand storms, strong air currents, and little rainfall.

This slow-growing Hoodia species grows as a shrub and produces additional stems from the base. A mature individual seldom spreads to a width of more than 50 cm. Its flowers are quite small, occurring just in between spines. The petals are fused together and display deep shades of red to yellow.

When pollinated, Hoodia flowers develop into slender seed-filled follicles. They split open when ripe, and the tufts of seeds are dispersed by winds. Interestingly, this species is often associated with mushrooms that emerge from the substrate surrounding the main stem.

Leafless, ribbed, and spiky are just a few words to describe this adorable cactiform succulent. H. pilifera is endemic to the steep slopes and sandstone mountains of South Africa. In these environments, it is usually found in low-densities. Discovered in the late 1770s, this was one of the first Hoodia species to become identified by taxonomists.

The spines of H. pilifera tend to be softer and shorter compared to those of its close cousins. They occur on stems that grow in a shrublet formation with a maximum spread of 2 meters. Subspecies and cultivars include ‘annulata’, ‘pillansii’, and ‘Monsterose’. The flowers of these are quite variable as they differ in color, shape, and size. All are relatively small with colors that range from dark purple to pinkish brown.

H. juttae is known for its large, light pink flowers that occur towards the tip of each mature stem. These can be large and numerous enough to fully hide the pale green-grey stem underneath. Branches tend to arise close to the base of the main stem. A fully grown plant is shrub-like and grows to a height of up to 50 cm.

Endemic to the mountains of Southern Namibia, H. juttae prefers an acidic and mineral-rich substrate. It must be well-draining as this species is prone to fungal rot due to moisture accumulation. Much patience is needed when propagating the stems as many of them will decay due to minor inconsistencies in water and soil properties.

Known to South African natives as “ghaap”, H. currorii is a desert succulent that is supposedly edible. Its stems are said to have a sweet taste. Cylindrical, pale grey-green in color, and densely covered in spines, the stems grow to a maximum height of 80 cm.

The hairy flowers are quite similar to those of H. juttae. They are large enough to cover the tips of the stems and come into bloom in mid-summer. Pale pink to rust red in color, they occur more profusely when the plant receives full sun.

H. currorii is one of the most frequently cultivated among the Hoodia species. It is best reared outdoors, but should be provided with protection from rain to prevent overwatering. Propagation via stem cuttings is the best way to enlarge your own H. currorii population.

Compared to its close cousins in the Hoodia genus, H. ruschii has a remarkably limited natural range. It is found only on the granitic slopes of Namibia’s Tiras Mountains. Its stems typically occur in between rocks and close to bushes. Depending on sun exposure, they vary in color from brown to greyish green and are covered in a generous amount of hard spines.

This Hoodia produces saucer-shaped flowers with fused petals. These are fairly large relative to the stem diameter, so they may also cover the growing tips of the plant. At the center of the deeply red-brown blooms is a delicate set of even darker reproductive parts. When pollinated, these transform into large, horn-like follicles.

The Khoi-San, an indigenous group of people in Southern Africa, highly value H. flava. Like some other Hoodia succulents, it is known for its appetite-suppressing properties. This species is distinguished by its cylindrical, 6-inch long stems which bear light to dark brown spines. Spines that are close to the growing tip of each stem tend to be much darker.

H. flava flowers are disc-like and extend to a diameter of about an inch. They are quite unique in this taxa as they are bright yellow. Moreover, they bloom in winter instead of spring-summer. Perhaps, this gives the species a competitive advantage. In warm months, it tends to be more tolerant of frequent rains.

H. alstonii is even more cacti-like than the species above. It can blend in with its natural environment as its stems are pale grey and are densely covered in remarkably sharp spines. You’ll need to be wary of having this plant around pets and children.

Like H. flava, this species produces small yellow flowers. Unfortunately, their odor is likened to that of excrement! They’ll surely attract flies but may ward off any guests who are interested in your succulent collection. It would certainly be best to situate this plant in a well-ventilated area.

The largest of all Hoodia succulents, H. parviflora is a stunning species to have as a centerpiece in the desert-themed section of a greenhouse. It can grow as tall as a small tree as its cylindrical stems reach a height of 2 meters (6 feet)! Medium-sized yellow-orange flowers appear close to the top of each stem. Sometimes, these are so crowded that they are hardly able to open fully.

Cultivated in many parts of the world for its pharmacological properties, H. parviflora is definitely a conversation starter. It can grow quite rapidly in indoor containers, away from potential pests and rainfall.