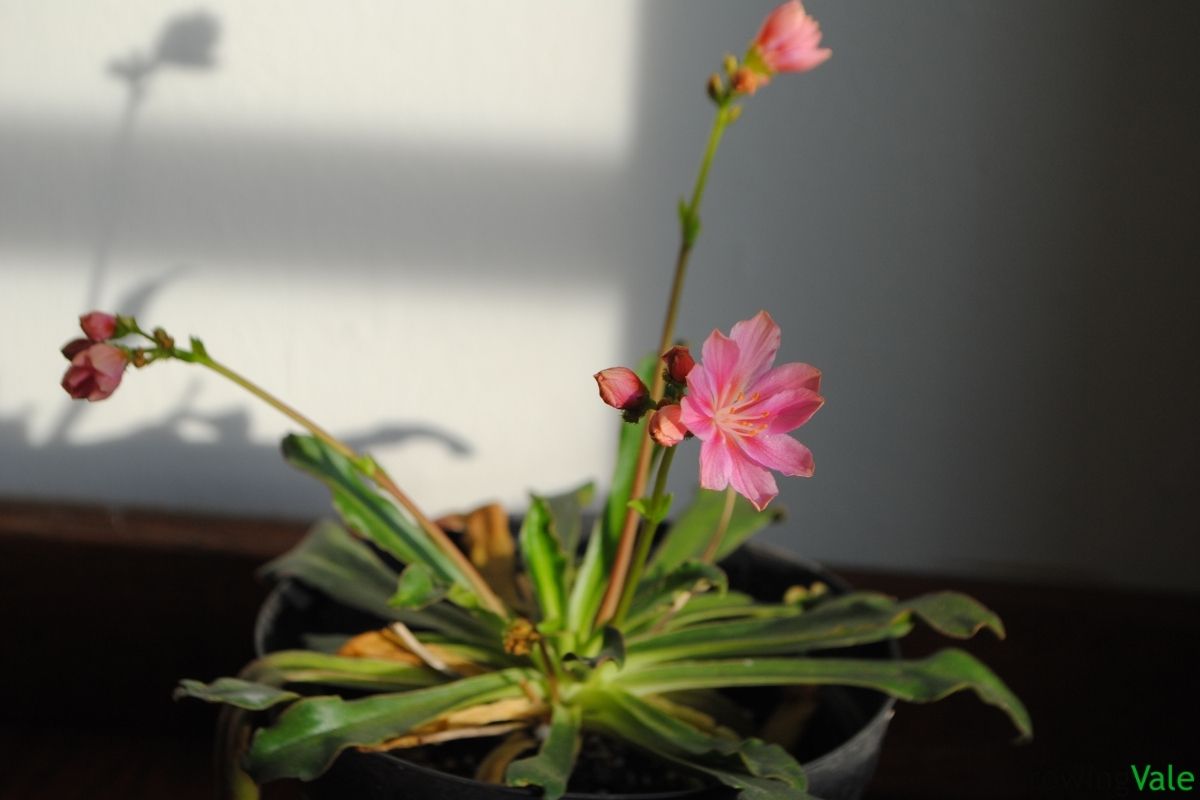 Are you enchanted by delicate flowers with the most stunning pastel gradients? This plant group has won the hearts of many horticulturists and plant enthusiasts due to its charming features. Lewisia succulents are show-stoppers that can be grown both indoors and outdoors, in container gardens or rocky substrates.

For a truly fantastic display of colorful blooms, you can even cultivate a wide assortment of Lewisia varieties along a wall with many crevices. These low-maintenance plants have root structures that are able to support growth along a steep angle. The deciduous leaves, which arise in a rosette formation, are usually dark green, fleshy, and spoon-shaped.

In late spring and summer, gorgeous pink to white blooms begin to appear. The petals are seldom solidly colored. They are marked by vibrant veins and tend to be lighter towards a funnel-shaped center. The flowers don’t usually bloom all at once, elaborately displaying their colors in succession instead.

This plant is perfect for small setups as the floral shoots seldom reach a height beyond 12 inches. The rosette itself grows to just 3 inches tall. The leaves can be masked and shaded by a profusion of blooms. These are often so vivid and stunning that the rest of the plant becomes inconsequential.

Unlike most typical succulents, Lewisia is native to alpine regions and can be grown in USDA hardiness zones 3-8. It belongs to the Montiaceae family, which includes members that were previously listed under Portulaceae. Most species are distributed throughout chaparrals, coniferous forests, and woodlands in western North America.

As a genus, Lewisia was named in honor of Meriwether Lewis, an American explorer who supposedly led the Lewis and Clark Expedition. With his team of naturalists and anthropologists, he explored the resources and studied the indigenous tribes of the American West.

Interestingly, Native Americans would exploit the roots of Lewisia plants. They referred to this group of plants as bitterroot due to the distinctly strong taste. The mountain range that they gathered these plants from eventually became known as Bitterroot Mountains. Lewis first came across Lewisia in this area in 1806, close to Lolo Creek.

One of the first recorded species under this genus is Lewisia rediviva. This perennial herb is known for being a survivalist. Even a seemingly dead root system can quickly generate new tissues when provided with appropriate environmental conditions. An Indian tribe, the Lemhi Shoshone, believed that the roots of this plant contained properties that could help stop a bear attack.

How to Plant Lewisia Succulents

Lewisia can be planted outdoors using freshly collected seeds. This should be done in autumn or early winter as the seeds need to be exposed to cool conditions to germinate. If sowing seeds in an indoor setup, they can take months to germinate. The process may be sped up if the seeds are cold stratified (i.e., in a refrigerator) for a few months before planting.

Space seeds around 2 to 6 inches apart to make room for their roots to spread. Once Lewisia seedlings are large enough, they should be transplanted to a larger setup that permits wider spacing. Seedlings that have grown sturdy enough to withstand mild outdoor conditions can be planted outdoors in spring.

As the crowns of Lewisia rosettes are quite susceptible to rot, they should ideally be perched just above soil level or slightly elevated. Any gaps between the crown and soil surface can be filled in with mulch or gravel. Over time, healthy rosettes may begin to produce runners, which you can use for propagation.

How to Propagate Lewisia Succulents

Lewisia can be propagated using offsets or new shoots produced by underground runners. Propagation should ideally be done in spring if the planting setup is located outdoors. Using offsets is the easiest way to expand your colony of plants. Carefully separate these from the parent plant, making sure the base and roots are kept largely intact.

If the offsets are in good condition (no cuts, exposed tissues), they can be planted directly into the appropriate substrate. Those with damaged tissues must be allowed to callous over completely as they are prone to rot. Over time, established offsets will grow their own taproots and eventually produce their own pups.

Propagation can also be done by taking cuttings of mature plants. As this method requires exposing the plant’s tissues, make sure to use sterilized materials and keep the cuttings in a secure, dry spot afterward. Once they have calloused over, dip the base of the cut shoot in rooting hormone prior to planting it in a gritty substrate.

To keep a Lewisia succulent happy and thriving, it must be planted in a well-draining, porous mixture. As it is an alpine plant, it can tolerate more moisture than most succulents. However, soil that remains continuously wet may damage the crown and the roots, as well as any leaves that are kept in contact with moisture.

Garden soil can be used for Lewisia as long as it is amended with material that can increase the grittiness or overall porousness of the substrate. The addition of perlite, sand, and rocks should be effective at improving the drainage capacity of the soil. Note that this plant group should not be treated as your regular border species, especially as they favor conditions in sloping rock faces or cliffs.

To improve the organic richness of the substrate, you can mix manure and compost into the soil.

Avoid using heavy soil toppings. Instead, opt for a layer or mulch or light rocks as these are less likely to weigh down the soil and trap moisture.

Lewisia succulents should be watered regularly to encourage good growth and flower production. Hybrids that receive sufficient water may bloom up to four times in a single growth period. Though they benefit from adequate moisture, they may suffer due to regular overhead waterings. An overhanging crag or growth along a rock wall would help regulate the flow of water.

Once established, Lewisia succulents are able to tolerate brief periods of drought. Best growth is obtained through regular watering, with moisture being evenly distributed throughout the substrate. If rainfall events are spaced too far apart, watering may be done 1-2 times per week from spring to fall.

Excess moisture during winter can be quite dangerous, even for mature Lewisia succulents. It would be best to withhold the provision of water through markedly cold winters. Keep in mind that low temperatures will prolong evaporation periods, keeping the crown exposed to moisture for longer than usual.

Full sun exposure is required to keep Lewisia succulents in good shape. Deciduous species favor bright light all throughout the year. Some evergreen species can withstand partial shade. The waxy coating on the leaves helps protect them from becoming sunburnt or scorched under full sun.

If indoors, the plant should be placed close to a window that receives at least 6 hours of full sun each day. Insufficient light exposure can cause the plant to become stunted and produce less blooms. In warmer climates, partial sunlight is more likely to be tolerated without growth issues.

In the wild, Lewisia tends to grow in areas with low to infertile substrates. This is partly due to their occurrence in rocky slopes or in craggy environments where their roots have minimal access to soil. Thus, fertilizer is not necessary.

Substrate amendment with compost or manure prior to planting should be sufficient. If concerned about the substrate’s nutrient content or capacity to support heavily flowering plants, you may use a low-strength all-purpose fertilizer during the growth period. Application just once a month or less should be enough.

As they are native to alpine regions, Lewisia species prefer cool weather and fairly dry summers. A range of 50-60F is preferable, as this genus is hardy to USDA zones 3-8. If located outside of these zones, pay attention to sun exposure as this can either improve or worsen conditions for the plant.

Lewisia succulents are known for withstanding dry winter conditions, which is why they are often found in the coolest sections of greenhouses. For the most part, they won’t mind the cold as long as the roots and crown are kept dry.

Low humidity is best for cultivating these alpine plants, though higher levels in spring and summer may be tolerated. Ample ventilation can help Lewisia recover in the event of excess moisture.

As Lewisia succulents are low-growing, rarely reaching a height above 12 inches (with flowers), they will not require pruning. Flower stalks may be cut back once the blooms are spent. Some gardeners opt to regularly deadhead the flowers to encourage repeated bloom periods from spring to early fall.

If you find that your Lewisia rosettes are struggling to bloom, it may just be time for them to be repotted. This should be done every 2-3 years or whenever the rosettes begin to look leggy or imbalanced. Repotting refreshes the roots and allows for adjustments of the plant’s angle and orientation.

Use a shovel to carefully dig out the Lewisia rosette, making sure to keep the taproot intact. Use this opportunity to separate any offsets that you intend to propagate. When repotting the rosettes, leave some room between the crown of the plant and the soil’s surface. Fill in the gap with mulch or stone chips.

Though Lewisia is generally not susceptible to major pests and diseases, it is advisable to regularly monitor the foliage for anything out of the ordinary. When grown outside of their native range, these plants can fall victim to foreign pathogens and pests. When conditions are not optimal, a few pests and diseases may manage to significantly affect the crown.

Often, Lewisia succulents are unable to survive through winter due to root and crown rot. Withhold watering the plant to prevent this from occurring. When moisture accumulates around the leaves of the rosette, aphids and mold may begin to colonize the plant. If possible, manually remove aphids and any other pests (snails, slugs) as soon as they are spotted.

In case of extreme pest colonies, you may need to consider using an organic pesticide. Isolate affected plants to prevent contamination. If the leaves appear discolored or are soggy to the touch, inspect the roots of the plant.

These plants are chiefly cultivated for ornamental use. They make great wall plants and are perfect for spring to fall attraction. The colorful flowers can amp up the appearance of any type of space.

Traditionally, and along this genus’ native range, Native Americans used the roots to treat a few ailments. They produce compounds that can serve as a diuretic to help detoxify the body. Some species can supposedly treat sore throats and improve metabolic efficiency. Some were also a vital food source of many tribes.

Due to their fantastically colored flowers, Lewisia is a well-loved genus with many species that are prized for their ornamental appeal. Many horticulturists have dedicated their time and skills to developing striking hybrids and cultivars.

Some of the most popular Lewisia species and cultivars are listed below.

Lewisia succulents are the perfect, low-maintenance plants for cool regions. The blooms can significantly brighten up and bring color to your garden. The stunning flowers are definitely hard to forget. With a few varieties planted close to one another, you’ll be the envy of plant lovers far and wide.