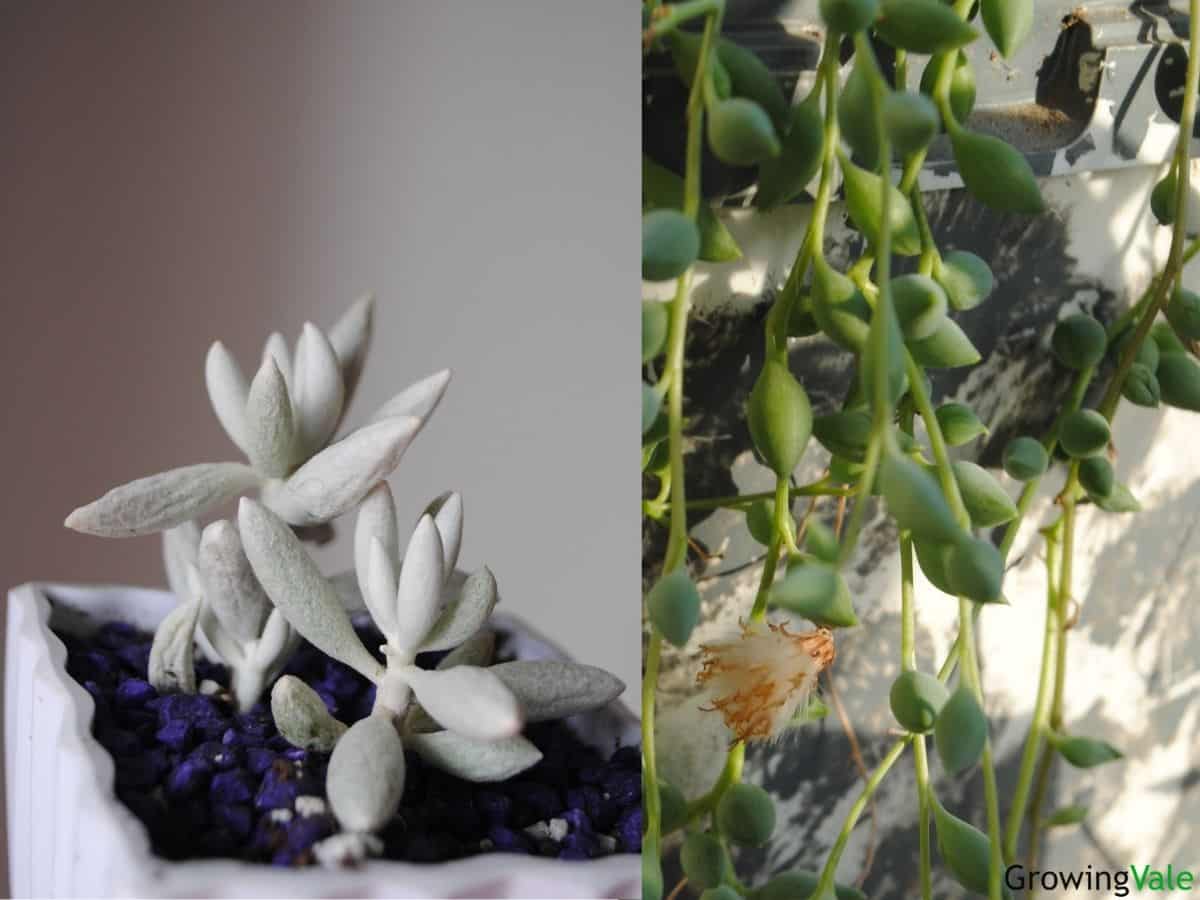 Did you know that there are around 1,000 species of plants in the Senecio genus but only around 100 of these are actually succulents? In this article, we’re going to focus on some of the top types of Senecio succulents that you can grow at home.

Most of these Senecio varieties are fairly easy to grow and are drought tolerant. They prefer warm temperatures and are generally not cold tolerant. The majority of these species are either low-growing plants or have a cascading habit. This makes them ideal for growing in pots and hanging planters.

No matter the variety, they all require extremely well-drained soil and don’t tolerate sitting in water. Therefore, they only need to be watered once the soil has completely dried out.

Let’s look at the top 23 Senecio succulent types you can grow at home.

This plant was one of the first succulents cultivated in Europe dating back to around 1570. It’s classified as a small shrub growing to around 3 feet tall. However, the plant is spreading and can reach a width of around 8 feet wide. Of course, if you grow this indoors in a pot, it won’t get anywhere near this large.

This lovely succulent has slender, upright, cylindrical stems that are bright green. It also has small oval green leaves and white or greenish flowers that bloom in fall and winter. This indicates that the plant is actually dormant in summer. It also makes a great addition to an outdoor rock and succulent garden if you have a mild or warm climate.

The candle plant has interesting thick upright stems that look like candles. The leaves along the stems are heavily lobed and also a lovely green color. However, this plant is actually deciduous and the leaves turn a stunning purple color before they fall off.

When grown outdoors, this plant will spread through underground tubers to form a sprawling clump. Of course, when you grow it in a pot, it can’t spread further than the pot will allow.

This succulent does produce rather small and quite insignificant flowers but these have a rather unpleasant odor that attracts both flies and bees.

This is another favorite for planting in rock or succulent gardens as it can provide a nice backdrop for smaller growing plants. It has clusters of thin, pencil-like upright stems that are bright green. In its native habitat, it can grow up to 6 feet tall.

It also produces clusters of yellow flowers at the top of the stems that almost look like fingers before they open with their reddy-orange tips. These flowers are sweetly scented and bloom in winter.

This succulent makes a spectacular container plant with its silvery-blue foliage and stunning red flowers in the fall. It needs to be placed in full sun if you want it to bloom.

The flowers form tight pom-pom-like clusters at the top of the stems and put on quite a spectacular display.

This trailing succulent has strange-looking round leaves that are somewhat tear-shaped. When you look closely, you’ll see that the veins are transparent. It produces clusters of tiny yellow flowers in late summer right through to winter.

This is another upright growing succulent with slender green stems and narrow pointed leaves. The stems take on a purple tinge when mature and the leaves are also edged in purple. The leaves are quite fleshy and grow out sideways so they look like propellers.

Bright yellow, daisy-like flowers are produced at the tips of the stems from mid-summer to fall.

This shrubby succulent has thick green stems with flattened, thumb-sized leaves. The leaves are arranged in whorls around the stem and point upward. They are a lovely lime green color and sometimes tinged with red around the edges.

The plant also produces lovely yellow daisy-like flowers at the tops of the stems.

This is a spreading succulent with stems that will crawl across rocks or cascade down over a hanging pot. The leaves that grow along the stems are a silvery-blue color and grow upright in whorls around the stem. The leaves are tapered at the base and are covered with a waxy bloom.

Interestingly, this succulent has been in cultivation since 1702 and is edible.

The most outstanding feature of Senecio fulgens is its bright orange-red flowers. These can be quite profuse on a mature plant. This succulent grows as a shrub to a height of around 2 feet. The leaves are succulent and arranged around the stem in a whorl.

This is a lovely string succulent that’s perfect for growing in a hanging pot. It has fleshy green succulent stems that will cascade down over the edges of the pot. Along the stems are tear-shaped leaves that are dark green with darker green stripes.

Depending on the amount of sunlight that the plant gets, these leaves can also take on hues of yellow, orange, or even dark red. It produces white disc flowers that look like feather dusters.

This is another trailing succulent perfect for hanging planters. It has small, overlapping leaves that look like flat grapes. Depending on the amount of sunlight the plant gets, the leaves can be either jade green or pink and maroon.

This popular Senecio looks like a miniature dragon tree. It has a singular stem and multiple forked branches. At the tips of the branches grow tufts of upright blue-green leaves. When grown in a pot, this succulent makes an interesting specimen that won’t grow too large.

There’s a reason this succulent has the common name of ‘spear head’. If you look closely at the blue-green leaves, you’ll see that they’re shaped exactly like a spearhead with quite a pointed tip. This is also a trailing plant and makes a stunning addition to any succulent collection.

The flowers are pale yellow and appear in early fall.

From a distance, this succulent looks just like a trailing ivy plant. However, the leaves are quite waxy and definitely succulent. The plant also produces lovely pale yellow daisy-like flowers. There’s also a variegated variety of this plant that has both yellow and green leaves.

The blue chalk sticks plant is quite a popular landscaping plant due to its lovely blue upright stems. It’s fairly low-growing and only reaches a height of around 12 inches. This is also a spreading plant and needs regular pruning to keep its lovely shape and growth habit.

The leaves on this lovely trailing succulent really do look like tiny green dolphins. It’s become a very popular houseplant for just this reason. The Senecio peregrinus is easy to grow indoors as long as you give it some bright, indirect light near a window. It doesn’t like to grow in full sun and also needs to dry out in between watering.

The leaves on this trailing succulent look like small green bananas, hence the common name, ‘string of bananas’. This is one of the easiest trailing succulents to grow and will tolerate full sun in the morning as well as bright shade.

This plant looks absolutely stunning when grown in the top of a bird bath or fountain that you’ve turned into a succulent garden. The stems will cascade down over the side and look like falling water.

This is one of the most popular trailing succulents that many enthusiasts like to grow in hanging pots. It has long trailing stems with small round leaves that look like pearls. The only thing to watch out for is that the leaves can drop quite easily if the plant is touched even lightly.

Therefore, you want to hang this beauty in a spot where it doesn’t receive any passing traffic if you want to retain its lovely full growth. When in bloom, this succulent produces dainty white flowers that are tinged in crimson.

This variety of Senecio scaposus has silvery-green upright leaves with a white coating that rubs off to reveal the bright green leaves beneath. The leaves grow from the base in a whorl and have a cigar shape.

It’s a low-growing plant and only reaches a height of around 12 inches. This makes it perfect as a ground cover in a rock garden or for growing in a container.

Instead of having cigar-shaped leaves, this variety has leave tips that are spatulate with slightly crimped edges. It has the same growth habit with the leaves growing upright directly from the base of the plant. The leaves have the same white covering that rubs off.

This is another Senecio with blue-green foliage that is very similar to the blue chalk sticks plant except that it’s much smaller and very slow-growing. It has the same upright blue-green leaves and produces small, quite insignificant white flowers on taller stems.

This bizarre-looking succulent has tall, pencil-like stems that have soft spines along the sides. However, the plant produces the most gorgeous orange-red flowers on the tips of the stems that are quite large and showy.

This is another blue-green succulent with upright, pencil-thin leaves that grow in a whorl. It can reach a height of around 15 inches but can spread to around 24 inches when grown outdoors in a rock garden.

This popular succulent has round, fleshy leaves that grow upwards in a loose rosette. From a distance, the leaves appear almost white because they’re covered with a multitude of very fine white hairs.

The cocoon plant also produces short inflorescences with bright yellow flowers. However, these are nowhere near as spectacular as the lovely silvery, white leaves of this plant.

There seems to be some controversy around the name of this plant as there’s an indication that it is now called Caputia tomentosa. Nevertheless, we’ve included it in this list of popular Senecio succulents as many people still refer to it with its original botanical name.

As you can see, there are a large variety of Senecio succulents that you can grow at home. Some are ideal for hanging pots while others are perfect specimens to add to an outdoor rock garden if you live in the right climate.