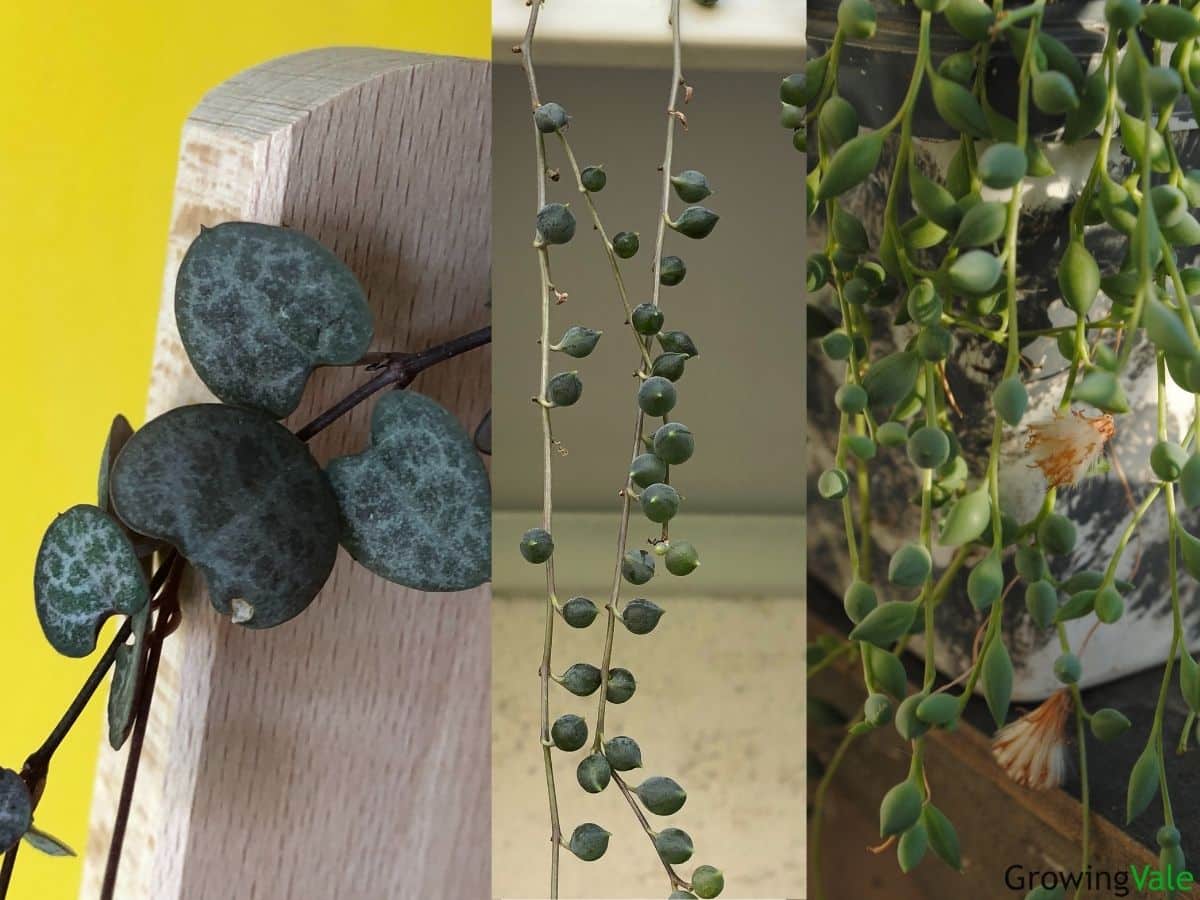 String succulents are lovely trailing plants that are suitable for growing in hanging baskets and planters and can add another dimension to vertical gardens.

They can also add an extra dimension to your interior landscape because they can be hung in front of a window in almost any room of the house. This not only looks visually appealing but having plants indoors also helps to keep the air nice and clean.

Most of these succulent plants are fairly easy to care for and have lovely pendant stems. As long as you never let them sit in water, you should be able to grow them quite successfully in your home. Remember that most of these plants require well-draining soil to survive and are drought-tolerant succulents.

Many of these hanging succulent plants are also suitable for growing in a sheltered spot outside to add some greenery to your veranda, patio, and balcony. Especially, if you live in a relatively mild climate and you protect the plants from frost and direct bright sunlight.

Let’s look at some of the more popular species of string of plants that succulent lovers enjoy growing.

This is quite an unusual succulent in that it has very long trailing stems and these stems are adorned with very thin leaves that are succulent. It’s a subspecies of Ceropegia linearis and originally hails from the dry forests in Malawi and Zimbabwe.

The root system of this plant actually consists of large tubers that store water and the nutrients that the plant needs to grow. When given adequate moisture, the plant produces parachute-shaped flowers that are lightly fragranced.

This plant likes to grow in bright, indirect light but should be kept out of direct sunlight. It’s important to use the “soak and dry” method when watering this plant to ensure that the roots are never allowed to sit in water. Other than that, this plant is easy to care for but may not be that easy to find commercially.

Like String of Needles, this plant has long, trailing stems and parachute-shaped flowers. However, it has heart-shaped leaves and these are somewhat variegated or patterned on top and plain underneath.

This species also originates from Africa but is now readily grown around the world. The flowers generally bloom between summer and fall and they have a fly-trap function. This function traps the flies inside the blooms where they are covered in pollen and then released to pollinate other flowers.

To grow String of Hearts successfully, use the “soak and dry” method when watering and make sure that the tuberous roots are not allowed to sit in water. If you give the plant enough warmth in winter, it should continue to flower.

This interesting species has dark green succulent leaves that grow in a stacked form on long, trailing stems. They look very much like they’ve been threaded onto the stems like a necklace.

Interestingly, even though the stems will trail over the edge of a pot, the tips will tend to grow upward toward the light. When grown in bright light, the green leaves will be a little lighter in color and they’ll have a red tinge around the edges.

When in flower, this crassula succulent produces masses of tiny white star-shaped blooms in clusters on the ends of each stem.

The String of Buttons succulent is also commonly known as Necklace Vine. It’s a fast-growing succulent suitable for hanging pots or a hanging planter and is native to South Africa.

When young, the stems are upright with fleshy triangular leaves that grow in symmetrical whorls or opposite pairs up the stem. Once the stems become longer and heavier they trail down and become slightly woody. The leaves are gray-green with reddish margins when exposed to sunlight.

The plant produces small, star-shaped flowers in spring that are white to pale yellow. It’s fairly cold-tolerant and can withstand temperatures as low as 20 degrees Fahrenheit (-6.7 degrees Celsius). However, prolonged exposure to cold temperatures will result in the plant dropping its leaves. Therefore, it’s best to grow this plant indoors if you live in a region with very cold winters.

This is another string succulent that is native to Africa. It has long, trailing stems and small succulent green banana-shaped leaves. The leaves are quite glossy and nice and plump. It’s a fast-growing succulent that was previously known as Senecio radicans and also sometimes goes by the common name of String of Fishhooks.

The plant produces small flowers in spring that have a lovely cinnamon scent. The flowers can be either white, lavender, or yellow. Like most succulents, this plant is relatively easy to care for and watering should be done using the “soak and dry” method.

Unlike many of the other string of succulents, Dischidia nummularia is native to the tropical areas of Asia and Australia. This is an epiphytic climbing plant which means that it uses a tree as a host to climb up and around.

The stems are quite thin and trailing and have small, nickel-shaped leaves on them. These stems can reach more than 3 feet in length if allowed to grow that long. This makes it great for hanging up high as it will create a “waterfall” of stems and leaves.

In spring, the plant produces white or yellowish flowers that are quite small. It prefers to grow in bright, indirect light and likes a fair amount of humidity. Therefore, it’s perfectly suited to growing in a bathroom. You should also mist the plant regularly with water to ensure it’s getting enough humidity.

This rather cute succulent has small, plump leaves that are shaped like little pickles. One of the more interesting features of this plant is that the bright, fleshy green leaves will turn a rusty red color when exposed to direct sunlight. The stems are also usually a red color and will grow quite long. This is why it’s also commonly called Ruby Necklace.

As this succulent is part of the aster family, it produces largish daisy-like flowers that are yellow in color. Ideally, this plant prefers morning sunshine but shade in the afternoon.

The leaves on this cute succulent really do look like green turtle shells. It’s native to the rainforests in Brazil. Therefore, it prefers a higher level of humidity than other succulents and does like to be kept moist but does need good drainage. It grows particularly well in lower light conditions and should be kept out of direct sunlight.

String of Turtles is a fairly slow-growing plant and does well in both hanging planters and terrariums. It’s important to note that the leaves on this plant are quite delicate and they tend to fall off easily if the plant is touched. Therefore, it’s best to put this plant in a spot where it’s not likely to get bumped or brushed past.

Peperomia prostrata has a fairly shallow root system. This means that it doesn’t require repotting very often and will happily live in the same pot for many years.

This is an attractive succulent and most appropriate for growing in a hanging basket as the stems grow as a sphere from the center of the plant. Each stem is covered with a large number of small, blue-green bead-like leaves.

This plant prefers moist soil but its roots should not be allowed to sit in water. It also likes a decent amount of humidity so would be ideal to grow in a bathroom. The plant produces clusters of small pink flowers along its stems that can also be either white,  or peach in color.

Burro’s Tail succulent is one of the most popular hanging succulents that people love to grow. It’s native to Southern Mexico and Honduras and is also sometimes referred to as Donkey’s tail, Lamb’s tail, or Horses’ tail due to its long succulent stems and leaves that somewhat resemble the tail of a donkey.

The plump little leaves are blue-green in color and are tightly packed around the trailing stem. This plant prefers plenty of bright light, whether you’re growing it indoors or outside. Use the “soak and dry” method for watering this plant and never let the roots sit in water.

This succulent also produces clusters of pretty little flowers on the ends of its long stems. These are normally red in color and create a nice contrast to the blue-green leaves.

String of Tears has interesting tear-shaped succulent leaves on thick, green stems. It’s a slow-growing succulent with long, trailing stems that start out growing erect. It’s a native to South Africa. If you look closely, you’ll see that the small leaves have longitudinal, transparent strips which gives them quite a unique appearance.

The plant also produces small, yellow flowers in late summer right through to winter. It prefers to be grown in bright filtered light and will get a little leggy if grown in low light conditions. It’s best to use the “soak and dry” method for watering but don’t leave the soil dry for too long. Conversely, don’t let the plant sit in water either.

When grown in sunlight, the leaves on this hanging succulent really do resemble small, rosy watermelons with their colored stripes. Interestingly, the stems also have longitudinal stripes on them. However, when grown out of direct sunlight, the fleshy, round leaves are a lovely lime-green color.

The plant will bear small, white flowers from spring to fall. It’s best to use the “soak and dry” method when watering this plant.

The string of dolphins has to be one of the cutest of the string succulent vines as the succulent leaves really do look like tiny, green, leaping dolphins. It’s a hybrid plant from a mix of Senecio articulatus and Senecio rowleyanus. If you can get hold of one of these, it’s fairly easy to grow too.

Like other drought-tolerant succulents bright, indirect light works well and it prefers the “soak and dry” method of watering. Plus, this succulent is quite easy to propagate so once you have the first one, you can easily decorate your home with pots of tiny, leaping dolphins.

String of Pearls is probably the most well-known among string succulent vines. It has almost round succulent leaves that look very much like small, light green pearls and are about the size of a pea. You may also see it called Curio rowleyanus which is a relatively new genus for some of these types of plants.

One of the more interesting features of this plant is the translucent epidermal leaf windows. This is actually designed to allow light into the interior of the leaf to increase photosynthesis.

The flowers on this plant are also quite spectacular. They’re formed in small clusters of white blooms with bright red stamens that protrude well out from the centers of the petals. At the end of the stamen are dark yellow anthers. Once the flowers have finished, you’ll notice soft, cottony seed heads.