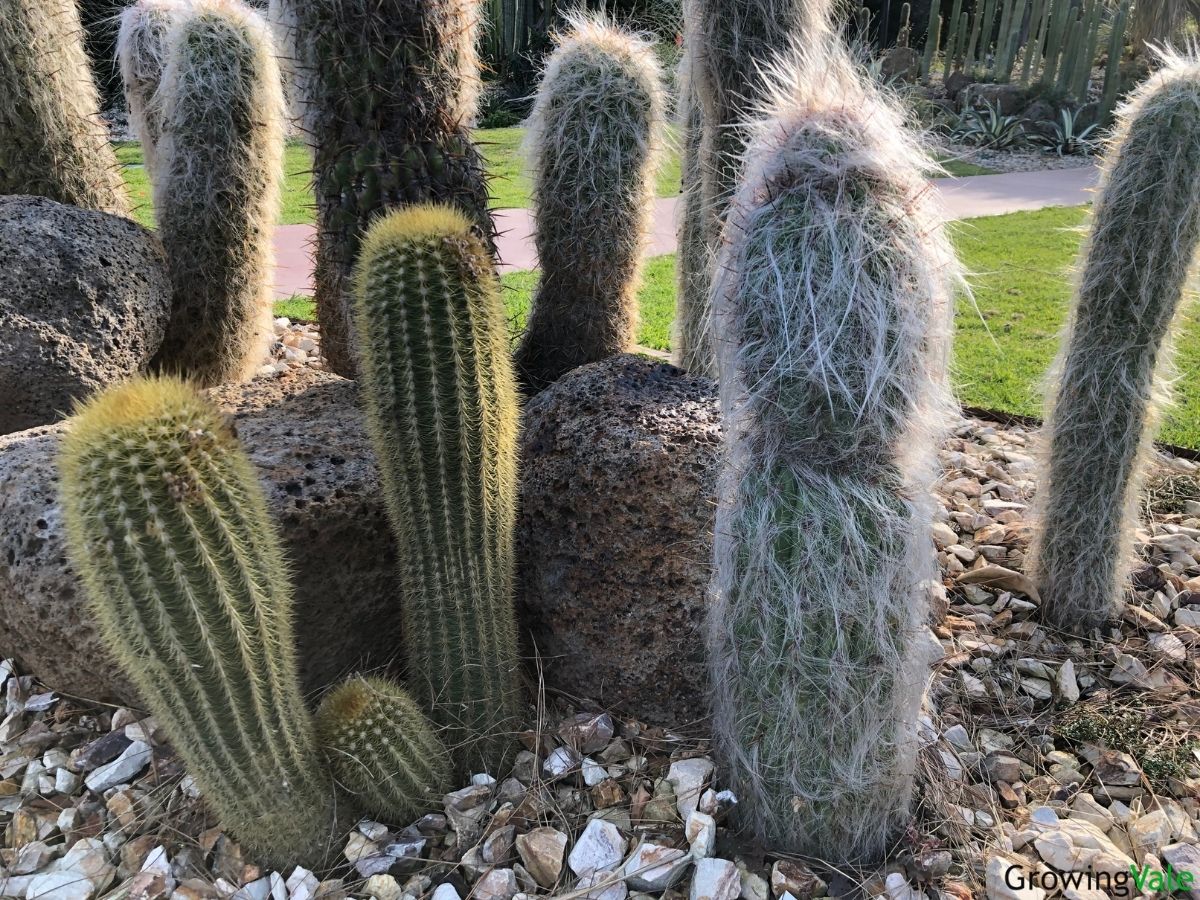 Sometimes, when you want to make a statement, a tall-growing cactus is the perfect solution. Whether you’re looking for an indoor focal point or you want to create a dramatic outdoor landscape, there are many tall cactus varieties that you could consider.

For desert gardens, a grouping of tall cacti against a blank wall looks absolutely stunning. Of course, you have to live in a warm climate to create this type of look.

Another favorite outdoor landscaping idea is to place one large, spectacular cactus in the center of a desert garden and surround it with large rocks and boulders, and underplant it with smaller growing varieties.

You can create a similar desert landscape indoors if you live in a colder climate by having one very tall growing cactus in the center of a collection of plants that you’ve grouped together. You can add an even more dramatic effect by directing a spotlight downward onto the cactus or placing one near the bottom of the plant that shines upwards.

Now that your imagination has been triggered, here are some of the tallest growing cacti in the world including tall skinny cactus plants.

To make your choices easier, here’s a table that shows the maximum height of each cactus species ordered from tallest down.

Bear in mind that the maximum heights are usually only achieved by cacti that are grown outdoors in ideal conditions. And, it can take many, many years for some of the slower-growing species to reach their maximum height.

For cacti grown in pots indoors, their height will be constrained somewhat because their roots are confined to the available space in the pot. Therefore, cacti that are grown indoors will never reach some of these lofty heights.

Now that you can compare the heights of some of the tallest types of cactus plants, let’s look at each species in more detail.

This is regarded as the tallest cactus in the world. In fact, one specimen was measured at 63 feet or 19.2 m tall gaining it a place in the Guinness World Records 2007 edition. This plant is growing in the Sonora Desert in Baja California, Mexico.

It’s also quite an attractive plant with its heavily ribbed columnar stems that branch upwards from a shortish wooden trunk.

The Saguaro is the tallest cactus that grows naturally in the United States. If you want to see these in their natural habitat, take a visit to the Saguaro National Park in Tucson, Arizona. There’s nothing quite like watching the sun go down across the desert with these giant cacti set against the changing colors of the sky.

If you decide to grow one of these at home, it will take more than one of your lifetimes for the plant to reach its maximum height. Nevertheless, these cacti can make a dramatic statement when grown in a pot, even indoors.

These plants are very similar in appearance to the Giant Cardon except that the branching seems to occur much further up the main stem. The stems themselves are similarly ribbed and quite attractive. If you’re ever lucky enough to see one blooming, the flowers are as spectacular as the plant itself. They’re pure white with a creamy center and the outer petals are often tinged with pink.

This is a lovely-looking cactus with its fuzzy white “hair” that almost obscures the green stem below. It produces singular columnar stems that take many years to reach their optimum height.

And, there’s a good reason for the long white hairs that cover the plant. They’re designed to protect the stem from the scorching summer sun and they also provide warmth during the colder nights. In fact, this species is cold-hardy to -10 degrees Fahrenheit ( -23 degrees Celsius).

But, don’t be tempted to touch the plant to see whether the hair is soft. Beneath that fuzzy covering lies numerous short, sharp spines. In spring, the plant will produce white flowers that will open at night. Following this, pinkish-red fruits will grow and these are covered with yellowish hairs.

This is another very attractive tall cactus. The upright columnar stems are a blue-gray color which can add a nice contrast when you place this cactus among darker-green colored ones. In addition, it’s heavily ribbed and there are numerous short, golden spines that grow from the areoles on the ridges of the ribs.

In spring, tubular-shaped flowers grow from these same areoles. They are generally white in color with yellow centers. Quite often, the outer petals are tipped with pink.

This cactus has a slightly different structure from other tall cactus types we’ve mentioned so far. It actually grows more like a skinny tree with a woody trunk and long, slender green branches. These branches have miniature leaves on them that tend to drop off.

Although the flowers themselves are quite inconspicuous, they grow from colorful bracts. The flowers attract a variety of different pollinators such as bees and butterflies.

This columnar cactus can grow around ten feet wide as well as thirty feet tall. This spreading growth is due to the many upright branches that the plant produces. The common name is indicative of the sharp toothpick shaped spines that are found all over the stems. This is definitely not a plant that you want to mess with!

However, it is a great specimen for planting in an area that doesn’t get a lot of foot traffic and would also make the perfect burglar deterrent when planted under a window. If you’re growing it in a pot indoors, make sure that you keep it well away from children and pets.

It produces large white flowers that only open at night. Following this, in winter, the plant will produce lemon-flavored fruits. These fruits are edible but have a better flavor when they’re cooked first.

This attractive tall columnar cactus would make an excellent feature in a desert garden or given pride of place in your indoor collection. The tall columnar stems grow upright and are heavily ribbed. It has the natural ability to form large clumps when grown outdoors but will not get nearly as large when grown in a pot indoors.

It’s another night-blooming cactus that produces funnel-shaped flowers that are pinkish-red in color. Following the flowers are edible fruits that lose their spines as they ripen. The bright red pulp is lovely and sweet.

This attractive columnar cactus is relatively fast-growing. Once the plant reaches a certain stage of maturity, the tall upright stems will produce branches. In the latter part of spring, showy white flowers appear that are only open at night.

There’s a very good reason that this striking cactus is commonly referred to as Mexican fencepost because it is commonly grown as a living fence in parts of Mexico mainly along roadways. The tall upright stems grow close together producing large clusters that would definitely deter intruders with the sharp central spines that grow along the ribs.

In spring, the plant is transformed with many showy pink flowers that grow along the ribs. These are followed by spiny yellow fruits that contain numerous black seeds.

There’s no mistaking the Peruvian apple cactus with its segmented branches, night-flowering blooms, and red fruits that remain on the plant for a long time. It’s common for this cactus to produce numerous offsets that will grow as large as the main stem.

The small crunchy seeds that are found within the fruits are edible and commonly referred to as pitaya.

This is a lovely columnar cactus with bulbous green stems that have around six to eight ribs. It tends to branch heavily from the base. There are white areoles along the ridges of the ribs that produce around 7 yellow or brown short spines.

This is another night-blooming cactus with white flowers that appear on the ends of the stems. Following the flowers, oblong, dark green fruits are produced.

This cactus grows into a tree-like plant with thick green stems that are heavily ribbed and grow upwards. Once the plant is around two years old it will produce showy, green flowers that eventually turn to a darker red color. The flowers are actually edible.

Once the flowers have finished, the plant produces currant-like fruits that are edible. These are called garambullos and are often sold in markets throughout Mexico and Guatemala either fresh or dried.

This is a branching, tree-like cactus that can grow rather quickly. In fact, it can increase its height by one to two feet per year. The spines are quite long and reddish in color.

The flowers are white and fragrant. These only open for one night and then die. This plant is ideal for growing in large containers.

This Opuntia has a massive trunk with many branching paddle stems. The large, oblong pads can be either spineless or may have a few spines. The flowers are cup-shaped and can be yellow or orange. These appear along the edges of the pads.

Like many of the Opuntia species, this variety produces reddish-purple fleshy fruits that are edible and quite delicious. However, these fruits also have sharp bristles that need to be removed first. They are commonly made into jellies, jams, or even alcoholic beverages.

Apart from growing quite tall, this species can also grow quite wide – up to 10 feet. The stems do not have spines on new growth but these develop as the stems mature and can be quite sharp.

It’s quite rare for this plant to bloom in cultivation but if you’re lucky enough, it will produce very showy coppery-red blooms. In countries like Peru, Argentina, Ecuador, and Bolivia, this plant is grown as a living fence.

This is another clumping cactus that can form dense thickets from the base. Each stem has around 5 to 10 ribs with bristle-like spines along the ridges. On some plants, the tips of the stems are covered with hairy “beards”.

Pale pink flowers develop on the upper stems in spring. These are also only night-opening. Following these, the plant produces red fleshy fruits that are edible.

This is another tree-like cactus that produces a woody trunk. The branching stems grow upwards and when mature, the plant has a candelabra shape. The flowers on this plant are quite stunning.

These flowers are funnel-shaped and ivory in color. They open during the day and close at night. Following these, the plant produces red fruits that are edible and a little on the acidic side.

This is quite a stunning specimen with its slender columnar tall stems that are covered with silvery-blue spines and lots of hair. Once the stems reach a height of around 18 inches, blooms will appear on the sides of the stems.

These are deep red in color and add amazing contrast to the silvery stems.

This interesting-looking species has cylindrical, fleshy stems that tend to branch every which way. The stems have barbed spines that will attach to anything that brushes past the plant.

The flowers are magenta or purple and appear in late spring and early summer. Following these are yellow fruits that are shaped like a cone. These will remain on the plant all throughout winter and are edible.

This lovely cactus has lime-green stems that grow upright and have long yellowish-white spines that turn gray as the plant matures. The flowers on this cactus are quite spectacular but they open in the evening and only last until noon on the following day. These flowers can reach a diameter of around 6 to 8 inches (15 to 20 cm).