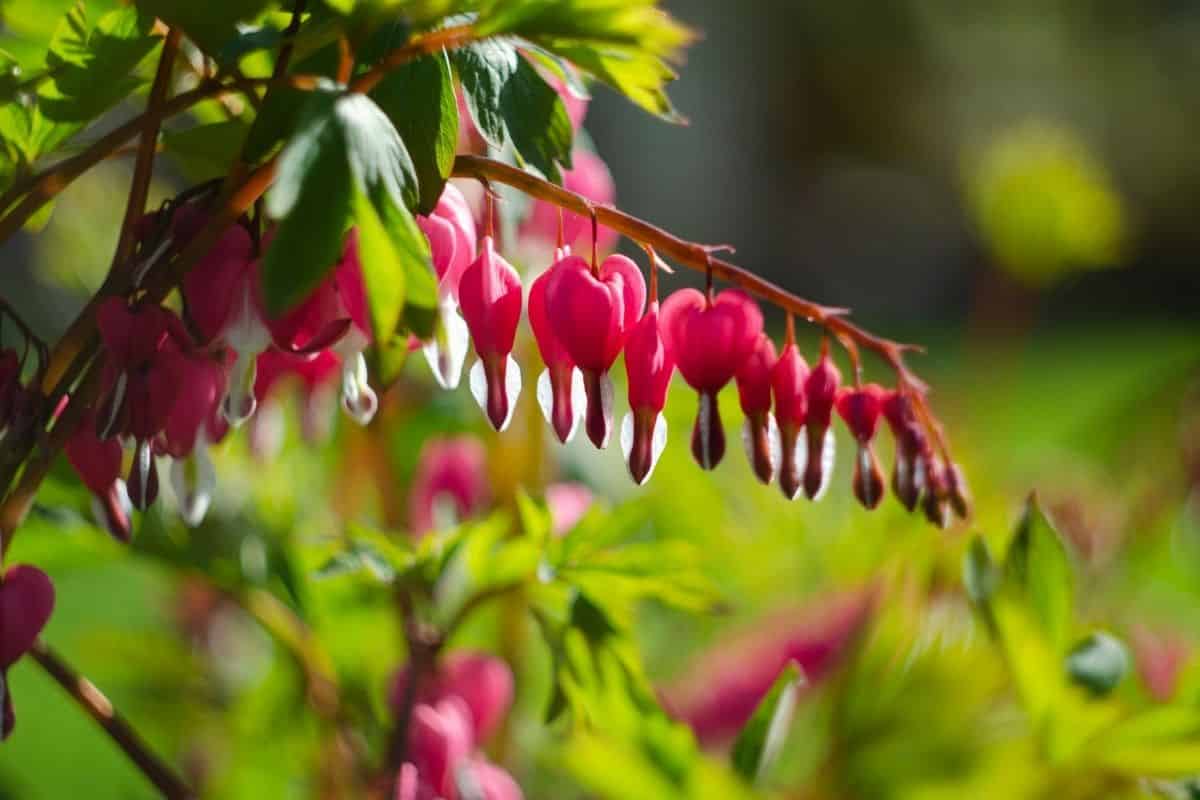 The Bleeding Heart (Lamprocapnos spectabilis, formerly known as Dicentra spectabilis) is a perennial shrub with stunning flowers. True to its name, the Bleeding Heart flower is a pink, heart-shaped bloom with a delicate, white stamen that hangs from the tip of the heart. The flowers hang at regular intervals along an arching stem.

Bleeding heart plants are perfect for borders in cottage-style gardens, or to bring a pop of color to shaded, woody areas. These plants also make great additions to bouquets as they last for up to 2 weeks in a vase.

Native to China, Japan, and Korea, the Bleeding Heart shrub was first introduced into England as far back as 1810 but did not become established until 1846. It was re-introduced in 1846 by The Royal Horticultural Society, following a plant exploration trip to eastern Asia, and has since then become a common garden favorite.

In Latin, the specific epithet (spectabilis), translates to mean “note-worthy” or “showy”, no doubt about the plant’s dramatic blooms.

How to Grow a Bleeding Heart Plant

The Bleeding Heart flower can be grown either outdoors in beds, or in containers. This herbaceous perennial grows in clump form, up to 3 feet tall and 2.5 feet wide.

It blooms from late spring to early summer. By mid-summer, flowers drop, and foliage yellows before the plant dies back in preparation for winter. New growth emerges from the ground in early spring, where roots from the previous year remained dormant.

Growing Bleeding Heart in a Bed

These are great border or filler plants in cottage-style gardens and are also perfect for more shaded areas. Accompany with later developing perennials such as hardy geraniums, hostas, and ferns to fill in the gaps as Bleeding Heart dies back. Alternatively, plant annuals such as impatiens underneath which will grow up as the plant dies back.

Plant crowns in early spring, ensuring buds are 1-2 inches below the soil surface. Make sure to choose a partially shaded area with well-draining soil. When transplanting Bleeding Heart seedlings or rooted cuttings, take care not to damage roots and ensure plants are placed in areas with suitable conditions. New plants should be started in late spring or early summer.

In cooler climates, plants will benefit from an extra layer of compost in fall to keep roots warm over the winter dormancy period.

Growing Bleeding Heart in a Pot

The Bleeding Heart flower makes an attractive potted plant. These plants prefer partial shade so are great for growing indoors, however, they should be overwintered outside or in a cool greenhouse.

Bleeding Hearts grown in pots should be fertilized regularly and be repotted every one to two years as the plant outgrows its container. To do so, gently remove the plant, ensuring the root ball is intact, and place it in a container the next size up. Place the root ball carefully into a hole dug in the moist, potting medium, making sure the plant remains at the same depth as it was in the previous pot.

Plants may need to be divided every three years to avoid overcrowding. When potting crown divisions, up to half of the root mass can be cut away if needed without significantly affecting growth or flowering.

The Bleeding Heart plant can tolerate slightly chalky soils as it prefers a neutral to slightly alkaline soil pH, however soil pH is not hugely important. This plant will not grow well in heavy clay soils.

For plants grown outdoors in beds, fertilize the soil with bone meal to add phosphorus. Plants grown in pots would benefit from regular fertilization of 200-250ppm of nitrogen and phosphorus from a balanced NPK fertilizer.

The Bleeding Heart shrub is native to forested areas of eastern Asia where it grows under dappled sunlight. Therefore, partial shade is recommended – it will not bloom well in dense shade. In Northern latitudes where temperatures are cooler, plants can tolerate more sun, as long as the soil is kept moist. In Southern areas, where temperatures are higher, partial shade is essential.

This plant is suitable for USDA zones 3-9, but if exposed to extremely warm temperatures, the plant will die back early before re-emerging the following spring.

Pruning is not necessary for the Bleeding Heart bush as it will die back during winter. However, light pruning can help keep it looking neat.

Bleeding Hearts have few pest problems. They are not eaten by large herbivores such as rabbits or deer, but Thrips may damage flowers, and slugs and snails may eat newly emerged growth.

They are susceptible to fungal leaf spots. If found, cutaway and dispose of any infected leaves. They are also susceptible to the Tobacco Rattle Virus, first detected in a Bleeding Heart in the US in 2000, which ultimately results in the decline and death of the plant.

When handling, gloves, and other protective gear are recommended as contact with the foliage may cause skin irritations.

Although the Bleeding Heart flower is normally purchased as seedlings from nurseries, propagation at home is possible. There are several methods of propagation: division, cuttings, root cuttings, and seeding. The time of year plays a factor in which method is the most suitable.

Propagation by division is possible in early spring before bud break, or fall after leaves have died down. Divide crowns into two to three-eye or three to five-eye sections.

If dividing crowns in fall, proper winter storage is essential to ensure crowns do not dry out and to protect from mold. Pack divisions into plastic-lined crates or plastic containers, filled with slightly moist peat and perlite (1:1 equal volume), and store at 34 – 39°F for four months before planting in the spring.

Take vegetative cuttings in spring from new growth and place them in a moist peat and perlite mixture (1:1 equal volume), under humid conditions. Roots may take up to one month to form.

Take root cuttings in the fall by cutting a 3-4 inch section of root and placing it into a moist peat and perlite mixture (1:1 equal volume).

To germinate, seeds need a warm period, followed by a cold and moist stratification, accompanied by another warm period. Under the right conditions, the Bleeding Hearts will self-seed and seedlings can be removed and transplanted with care. Seedlings will flower during their second year, however, transplanting may delay flowering by an extra year or more.

Bleeding Hearts produce seeds in late spring, and newly harvested seeds can be germinated by cold stratifying the seeds in a moist, peat-based germination mixture at 39°F for 6-8 weeks. Followed by a 2-4 week period at 59-64°F in an area with light. Repeating this stratification process can help to germinate any additional dormant seeds.

There are several cultivars of Bleeding Heart flowers, all of which have similar care and maintenance needs:

The Bleeding Heart is a showy perennial native to east Asia with beautiful, pink, heart-shaped flowers. This shrub is suited to cottage-style gardens, especially when accompanied by later developing perennials such as hardy geraniums and hostas.

It prefers partial shade and well-drained humus-rich soil. Plants die back over winter, where roots remain dormant, new growth and flowering occur during spring. Potted plants should be overwintered outside in cooler temperatures. Propagation can be done using several methods, largely dependent on the season. The Bleeding Heart is toxic, so care should be taken during the handling stages.

There are several beautiful cultivars with different colors of flowers and foliage, making finding the perfect bleeding hearts plant easy.

Up next: Bleeding Heart Flower Meaning and Symbolism