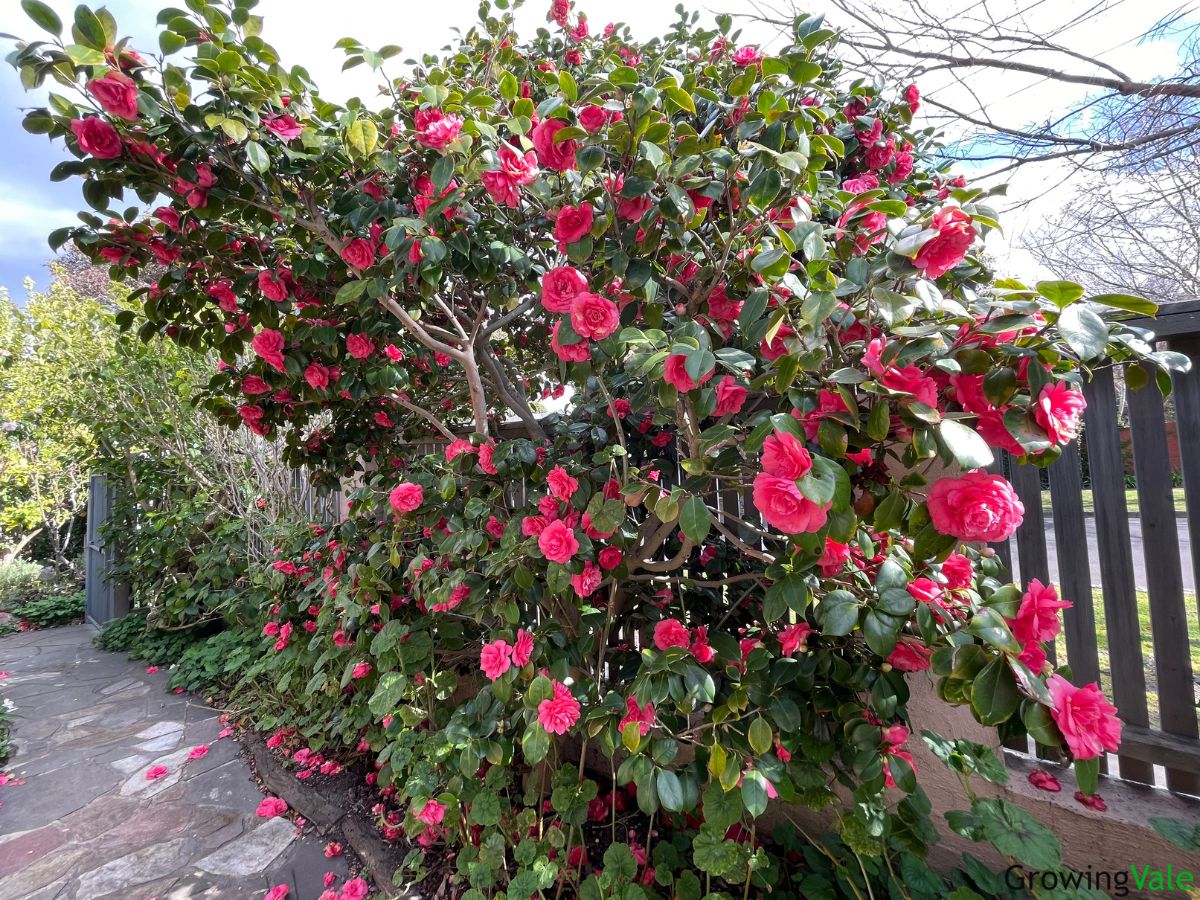 There’s no doubt that camellias brighten up the winter garden with their colorful big blooms. When everything else looks a little dull and dreary, these gorgeous plants burst into color and delight us with their exquisite flowers.

In fact, their bloom time can range from late fall to early and mid-spring depending on the specific cultivar or hybrid. In addition, camellia varieties can range in size from medium shrubs to small trees.

The added bonus is that growing camellias is surprisingly easy as they need very little care except for some annual pruning and fertilizing.

Camellias are older than modern civilization. These shrubs or small trees originally grew in Asian countries such as Japan, China, the Philippines, and Korea.

In Japan, these blooming shrubs feature heavily in temple gardens with many still growing and blooming in these old temple compounds today.

The most popular camellia shrub in the world is the Camellia sinensis, more commonly called the tea plant. The drinking of the beverage made from this camellia species first became popular in China around 1700 BC during the reign of Emperor Nung. It was eventually brought to Europe around 1650.

During this time, English officials were keen to have this camellia brought to England so that it could be propagated. However, the Chinese sent the Camellia japonica species instead. This meant that Camellia japonica became the most popular ornamental species of camellias grown around the world.

How to Plant and Grow Camellia Tree

Ideally, you want to plant your new plants in early spring, even if it’s still within their bloom time. At this time, the root system will still be fairly dormant so there’s less chance of damage to the root system.

When digging a hole for your camellia trees, make sure that it’s twice as wide and as deep as the root ball of the shrub. This will allow the roots to spread out and get established. Keep the soil moist for the first few weeks until your camellia plant is more established.

How to Propagate Camellia Plants

There are a variety of ways that you can propagate camellias but by far the easiest is to use semi-ripe cuttings. You can also propagate these plants using hardwood cuttings, by layering, or by grafting.

Semi-ripe cuttings are tip cuttings that are still green and have not yet become woody. These are often taken in summer after the camellia has put on some fresh new growth.

Select cuttings that are around 4 to 6 inches (8 to 15 cm) long and remove the lower leaves. There should only be around 2 or 3 leaves at the tip of the cutting.

It’s then just a case of placing the cuttings in some free-draining seed-raising or potting mix and keeping them evenly moist. In general, it should take around three months for the cuttings to form roots.

Hardwood cuttings are treated exactly the same but they are best taken in fall and early winter and consist of woody stem tips around the same size as the semi-ripe cuttings.

Layering is a process that requires bending down a lower branch so that it comes in contact with the soil. This can only be achieved if your camellia has branches that are fairly close to the ground.

To use this method, you need to carefully bend down one of the lower branches and secure this to the ground with a clip that can be fashioned from a piece of strong wire that is bent into a U shape. This is best done in summer.

Next, you need to cover the part of the branch that is touching the ground with some extra soil. Before you do this, it’s often helpful to make a couple of nicks in the bark where the branch touches the soil.

It will take some time for the buried branch to start producing roots, but once it does, you can sever the branch from the mother plant. You can then carefully dig up the new camellia and plant it elsewhere in the garden.

These beautiful evergreen shrubs are surprisingly easy to care for. In fact, these colorful flowers require very little maintenance except for additional water during periods of extremely hot and dry weather. Young plants should be protected from the harsh sun until they become well-established.

Here’s how to care for camellia plants:

When planting camellias in your garden, one thing to remember is that they love slightly acidic well-drained soil that contains a fair amount of organic material. Their ideal soil pH is around 5.5 to 6.5. It’s also a good idea to mulch around the base of your camellia after planting to retain soil moisture and keep the roots cool. You can use either pine straw or composted bark or wood chips.

It’s important to note that camellias are not drought-tolerant. They do need regular water during hot, dry spells. Give the shrub a good soaking during spring, summer, and fall in order to nourish the developing buds that will produce flowers.

Camellias generally don’t need any additional fertilizer if the soil has plenty of organic matter added and mulch is used after planting that will break down over time.

Use only organic fertilizers such as blood and bone, well-composted manure, or more organic material if you feel your soil is not rich enough.

This should be applied sparsely in early spring and early fall.

Camellias are best grown in part shade. However, they will still thrive in full sun in areas where the sun is not too scorching during late winter and spring. The flowers can become scorched if exposed to harsh sunlight while they’re still damp from the morning dew.

Once these flowering shrubs are fully established and have formed a nice lush canopy, they will be happy in areas with afternoon sun because their root system will receive morning shade and be protected from the heat of the scorching sun.

You’ll also find that camellia sasanqua varieties can handle more sun than some of the other species that you might want to grow in the garden.

Winter-blooming camellias are a Southern favorite because they thrive in temperate to mild climates. However, gardeners in cold climates down to USDA zone 6, can consider a few varieties of hybrids that have been bred to handle colder weather.

This is because camellias that are exposed to really cold temperatures are prone to bud drop and this will reduce the number of flowers.

It’s also prudent to choose a northern-facing planting position in the garden that provides some protection from a nearby building, fence, or hedge. It’s unwise to plant your camellia in a southern-facing position in the garden because the warmer temperatures may cause the shrub to break its dormancy too early and this will result in a loss of flowers due to frost damage.

If you like the free form of your camellia plant, it’s not absolutely necessary to prune it. However, many people like to shape their camellia bush into either rounded forms or trim them into hedges to use as a screen in the garden. Camellias respond really well to this type of pruning.

However, timing is critical if you don’t want to remove the following year’s camellia flower buds. Therefore, the best time to prune your mature plants is in late spring, just after their bloom time has finished

The only winter-blooming camellias that don’t like to be pruned are those from the species Camellia reticulata.

There are primarily two diseases that you need to look out for as these can be fatal for camellia bushes. These are root rot fungus and petal blight.

Any type of root rot fungus is often fatal for your camellia. The best thing you can do is avoid this disease in the first place by ensuring that the soil is well-drained and never gets waterlogged.

If you have a problem with this disease, you’ll need to apply a copper-based fungicide. While this may kill the fungus, it may not save your plant. If your camellia does survive, it will take several years for these evergreen shrubs to recover fully.

Camellia petal blight is another disease that affects and damages the flowers. If you spot any blooms that have been affected, make sure that you remove them immediately in order to stop the spread of the disease.

It’s also vital to remove any dropped camellia flowers as these may also be infected. In addition, you want to remove the mulch around the base of the camellia and replace it with fresh mulch. The removed mulch should be burned in order to kill any remaining fungal spores.

Fortunately, camellia shrubs that are grown in the garden aren’t usually plagued with too many insect problems. However, scale insects can be an issue.

This will often appear as yellow leaves because these insects suck the sap out of the plant. You can treat the tea scale by spraying your shrub with horticultural oil mixed with water.

Although the entire genus of camellias belongs to the tea plant family, only Camellia sinensis actually produces the leaves that tea is made from.

Most of the modern ornamental camellias originate from Camellia japonica or Camellia sasanqua. These are grown for their beautiful flowers as blooming ornamentals in gardens right around the world.

There are around 250 different camellia species and many more camellia hybrids and cultivars that are being created every year.

There are even camellia varieties that have fragrant blooms such as the wild species, Camellia kissi. This species has fragrant flowers that smell like lemons.

Camellias can also be classified by their bloom time as some have an early blooming time while others can be seen as late-season blooming varieties. This means that you can extend their gorgeous blooming displays by selecting varieties from both early and late-season varieties.

If you’re looking for camellias that are easy to hedge but will still bloom magnificently, you should check out some of the popular C. sasanqua cultivars like these:

Camellias are stunning flowering shrubs that help to brighten up even the dreariest winter garden when they bloom throughout the colder season from late fall right through to early spring.

Camellia plants are surprisingly easy to grow and care for in gardens with temperate climates. Some will bloom early in the season while other varieties will bloom much later.

In the US, camellia plants are a Southern favorite with gardeners primarily because they really love the more temperate southern climate.Check our blog for more flower types and names you can grow.