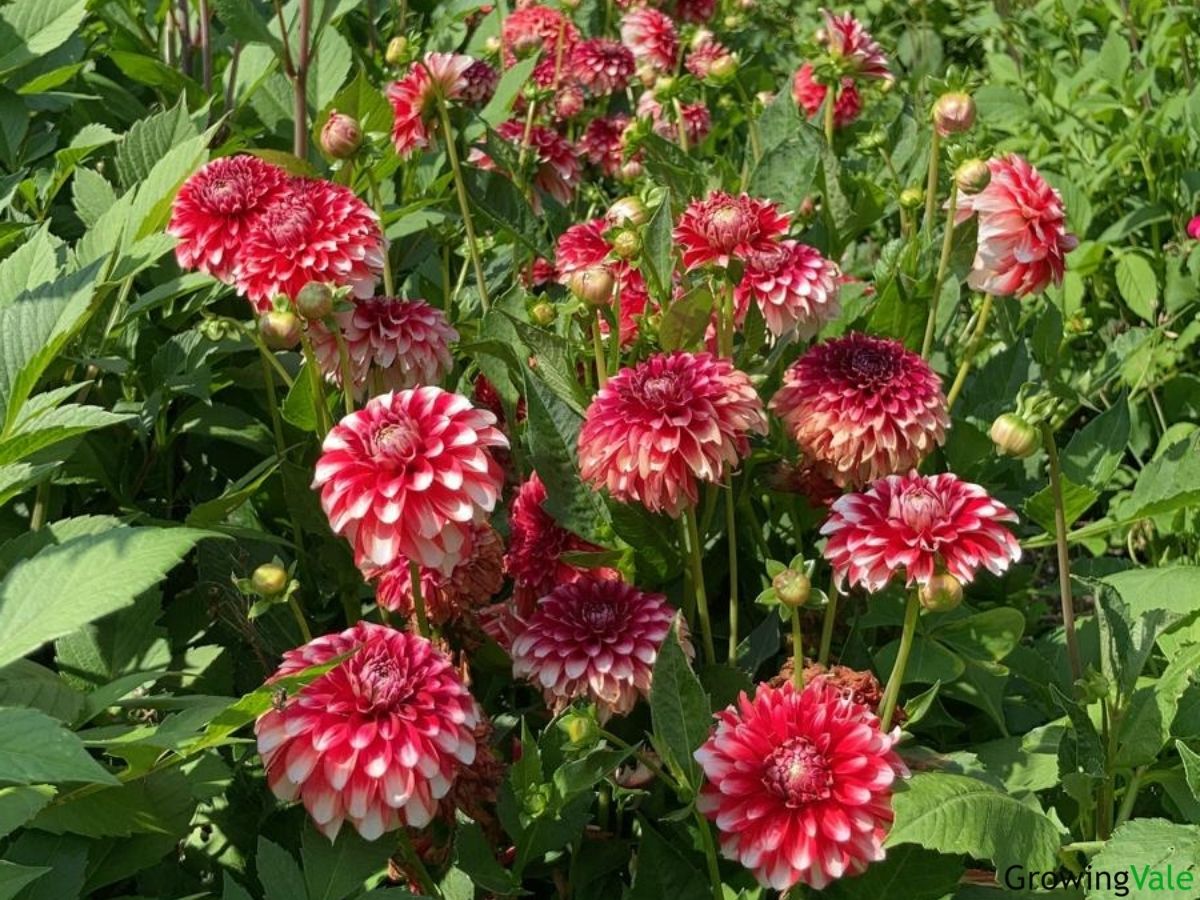 Dahlias are wonderful flowering plants that belong to the Asteraceae family! The genus Dahlia contains around 40 species, 6 of which have been bred for cultivation as garden ornamentals and the flower industry.

These hugely popular plants are tuberous perennials that will bring color to your garden year after year. Shorter cultivars look particularly impressive when planted en masse along cottage-style garden borders, or in containers on patios. Bigger varieties with extra large flowers make good central pieces that will surely steal the show!

Wild dahlias are native to mountainous regions of Mexico and Guatemala, where they were discovered in the 1500s by Spaniards conquering the Aztec Empire. The tree dahlia (D. imperialis) was one of these, although it was prized by the Aztec people long before it was discovered by botanists.

Dahlia flower hollow stems reach over 20 feet tall and were used for transporting water or as a water source itself by wandering hunters. The Aztec name for the tree dahlia “cocotli” translates to mean “water-tube”.

Dahlias were first introduced to Britain in 1798 from Spain, but it wasn’t until 1872 when the Dutch received a box of plants from Mexico that they gained popularity and became of interest to breeders. Since then thousands of dahlia cultivars have been created with numerous forms and color combinations.

Flowers have a variety of interesting forms that are classified as: single, double, cactus, dinnerplate, peony-flowered, pompom, waterlily, and more. They also come in every color except blue, with many unique and beautiful color combinations!

How to Plant Dahlias

Dahlia flowers are tender perennials, therefore it’s best to start stored tubers in a greenhouse in early spring (around February), then to plant them out once the risk of frost has passed. Rooted cuttings can be planted out in May or early June.

It is also possible to plant stored tubers directly into the ground in mid to late April. At this point, there is no risk of the ground freezing so the tubers will form roots. However, shoots won’t appear until early June, so directly planted dahlias will flower a little later than those started in a greenhouse.

Since most dahlias need to be staked, first amend/improve the soil then place the stake in the ground. Dahlia top growth is directly proportional to the growth of their root systems. Therefore, dig a hole 18 inches wide and deep, and fill in the loose soil to the depth required of the bulb/young plant, then top up to the soil line after planting.

If directly planting stored dahlia bulbs, plant them with their eyes facing up, 4-6 inches deep and spaced 2 feet apart.

For greenhouse-started bulbs, remove them gently from their containers taking care not to damage the roots or shoots, and plant them 4-6 inches deep with 2 feet between them.

When planting rooted dahlia cuttings, gently tease them out of their growing container, and plant them at the same depth as they were in the pots. Space them 20 inches to 2 feet apart.

Mulch after planting. New growth is vulnerable to slugs, so plan to protect them in the early stages.

Choose a deep, sturdy container with sufficient drainage. Pots should be between 8-12 inches in diameter depending on tuber size and plant variety. Fill with moist, coarse, soilless potting mix, and plant tubers 4-6 inches deep with the eye facing up. Some gardeners recommend putting the soil in layers, filling to the top of the pot as the plant grows.

Like in bed planting, place the stake in the soil before planting. Keep the soil moist, but not overly wet or overly dry. Container-grown plants will require more frequent watering than bed plants.

If starting the plants indoors in early spring, they should have a light directly above them to prevent their stalks from arching towards the light of a window. Keep fluorescent lights 6 inches above them for 12-14 hours a day, moving the light up as they grow.

If starting plants directly outdoors, wait until the risk of frost has passed. Dig up container-grown bulbs for overwintering as you would bedding bulbs.

An extra, optional step is to stir copolymer crystals into the potting mix following the packet recommendations to provide added protection from extreme weather.

How to Propagate Dahlia Plants

Dahlias can be propagated in numerous ways, either through bulb division, seeds, or rooted cuttings.

Start tubers into growth indoors in early spring, in a shallow container of potting mix. When shoots reach 1-inch tall, they are ready for division. Use a clean knife to cut the tubers into sections, making sure each one contains shoots and roots.

Plant each section into an individual container in a frost-free location such as a shed or greenhouse until they are planted out.

Dahlia seeds are often sold as color mixes, which are most suitable for beds and borders. Sow them in late winter to early spring indoors in a greenhouse, or using a seed propagator.

Fill the tray with moist potting mix, lightly press down on the soil, then gently push the seeds into the soil. Either cover the tray with a plastic bag or place the lid back on if using a propagator.

Within 14 days, the seeds should have germinated. Once the seedlings have grown their first set of true leaves, they are ready to be pricked out and transferred into individual containers. Feed them every two weeks with a liquid fertilizer, and plant them out in late May-early June after hardening them off.

To grow dahlia flowers from cuttings, take 3-4 inch sturdy cuttings from tubers started into growth in the greenhouse. Pull the soil away from the base of the shoots, and remove them near the base of the tuber. Dip the end in rooting hormone, and place in a container of damp, sterile potting mix.

Place the container in an area of high humidity, at 65-75°F under fluorescent light to ensure they receive at least 14 hours of light per day. If they are being grown in a greenhouse, supplement the natural light with artificial light to make up the 14 hours. Under these ideal conditions, expect roots to form within 10-14 days.

As the cuttings grow, they will need to be transplanted into larger pots before being hardened off and planted outside.

The ideal soil for dahlias is loose, crumbly, well-drained soil. This will give them the best chance to survive in the ground over winter. They will grow in heavy soil types, however, this increases the likelihood that they will need to be lifted before winter as heavy soils will become cold and soggy.

Improve the soil quality by mixing in 1-2 buckets full of organic matter per square yard. This can be either garden compost or well-rotted manure.

If needed it is possible to amend clay soil types by mixing in sand or peat moss to improve drainage and aeration. Mulching the soil is also recommended to preserve soil moisture during hot weather.

Water dahlias during dry hot weather. Make sure to aim around the base of the plant, and give them a thorough soaking once a week. Do not allow the soil to dry out completely or become overly wet. Container plants will require more frequent watering.

Fertilize plants with a high potassium fertilizer over the blooming season (July to September) every two weeks. For container plants, feed them weekly with a liquid fertilizer. Before planting, apply a general-purpose fertilizer to the bed, as per packet instructions.

Flowering is the most impressive under fun sun conditions, but in hot summer climates some light, filtered shade is recommended.

Dahlias are winter hardy to USDA zones 7-10, so in some cooler regions, tubers will need to be dug up and stored over winter. They require a soil temperature of 60°F  for tubers to start growing.

These plants are prone to powdery mildew if subjected to overly dry conditions, so make sure to water them well. Occasionally they can be afflicted with mosaic or tomato wilt virus which will stunt their growth and/or cause mottling.

Pests to watch out for are aphids (blackflies in particular) and slugs. Capsid bugs, glass-house red-spider mites, caterpillars, and earwigs are less common but can also be a problem.

New growth will emerge from June to July and may need to be thinned out. It is recommended to leave 7-10 shoots per plant, except for large-flowered varieties which should have a maximum of 3-5 stems. Doing this ensures bigger and better blooms. Simply select spindly-looking growth and pull it firmly to break away the shoot.

Once the plants have produced 3-4 pairs of leaves, pinch out the top to encourage branching.

When flower buds begin to appear, disbud the dahlias by cutting out smaller buds forming behind the larger, central bud. This will create a bigger and more beautiful central flower. This is not strictly necessary but recommended for large-flowered varieties and plants intended as cut flowers.

Deadhead dahlias every week to encourage more flowering. Cut fading flowers back down to the nearest leaf joint. This is a good opportunity to neaten up the flower bed and remove tatty-looking blooms.

If growing dahlias in a warm climate and well-drained soil, it is possible to leave the tubers in the ground over winter. In this case, after the blooming season is over, cut the stems down to the ground and cover tuber crowns with 6 inches of coarse mulch (pine chips or garden compost) to protect them from winter frosts. There is still a risk of losing some plants to the cold, but some gardeners prefer this over time-consuming overwintering.

Dahlia bulbs need to be dug up and overwintered in colder climates, or if they’ve been planted in heavy soils. To prepare the tubers for storage, cut the stems back down to around 2-6 inches. Gently lift the bulbs from the ground and shake off any dirt.

Remove any damaged tubers and store them in shallow crates or boxes without a cover. Surround them with dry compost or sand to provide insulation, just covering the top of the crown. Store the box in a cool dark place at 42-50°F protected from frosts such as a shed or garage. During especially cold periods, cover them with horticultural fleece or newspaper for extra protection. Check on them from time to time and remove any unhealthy tubers that are showing signs of rot.

Dahlias are one of the most popular ornamental plants today and are widely used for shop-bought bouquets due to their lovely flowers and long vase-life.

Their tubers were used by the Aztecs for their medicinal purposes as remedies for colic, flatulence, tuberculosis, and as a diuretic and a diaphoretic.

Dahlia tubers were also consumed by the Aztec tribes, and many attempts were made to introduce them to Europe as a food crop, but it was concluded that they simply weren’t suited for the European palette! Today dahlia tubers are still consumed in parts of Mexico.

With many lovely varieties and forms to choose from, picking the right dahlia types is fun and easy. Here are some of the most common and beautiful species and cultivars:

Dahlia flowers are members of the Asteraceae family. They are tuberous perennials that will flower year after year, and can be grown in either pots or beds!

They are native to Mexico and Guatemala where they were discovered in the 1500s. Following their introduction to Europe, breeders have successfully created thousands of beautiful cultivars in every color except blue and with numerous flower forms.

These plants are hardy to USDA zones 8-11, so more often than not the bulbs will need to be dug up for overwintering. However, this extra maintenance does not seem to be off-putting, as dahlias have proven to be one of the most popular flowering plants amongst gardeners!

Up next: Dahlia Flower Meaning and Symbolism

G. Whitley. (1985), The medicinal and nutritional properties of Dahlia spp.,