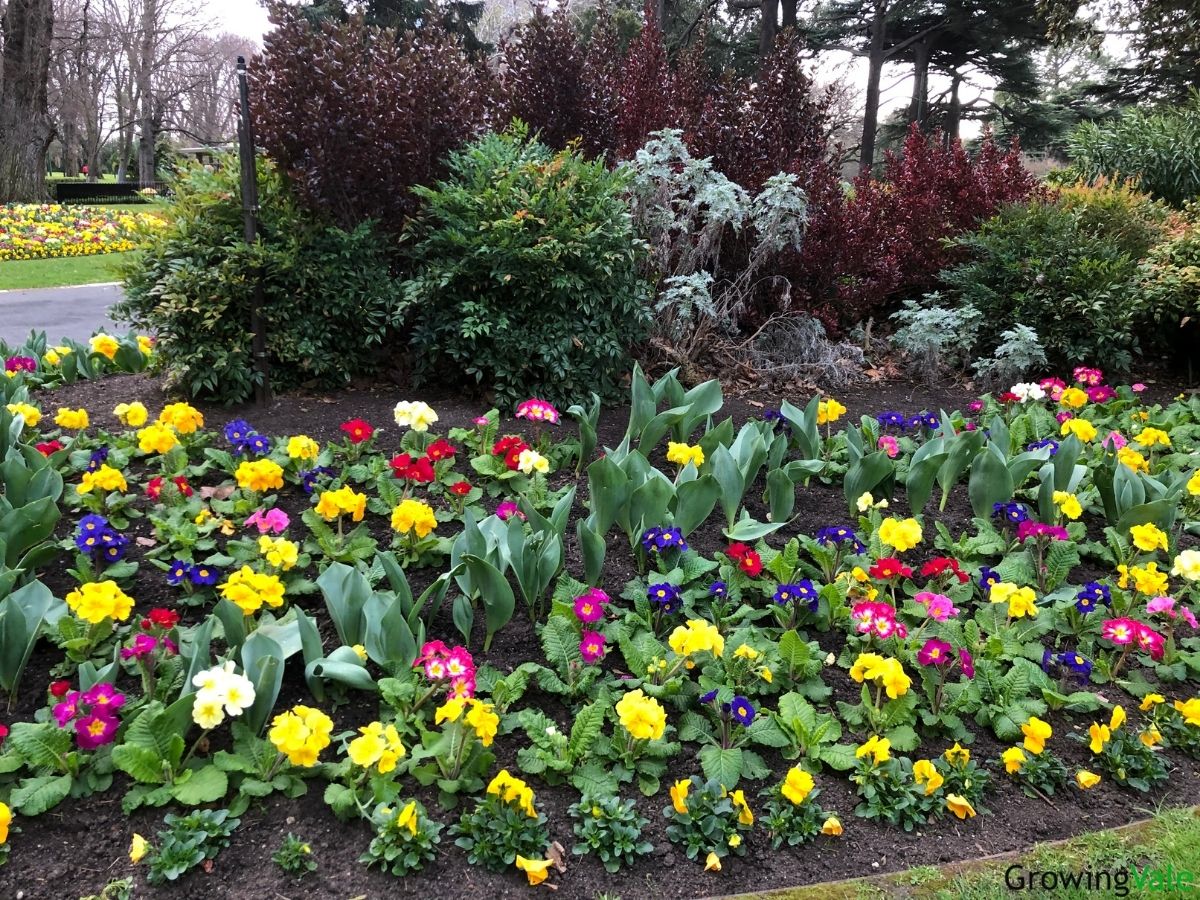 It will probably be of no surprise to you that when it comes to flowering plants, the list can go on and on! Yes, there’s no shortage in the world of wonderful flowers to add to your garden, the tricky part comes in choosing which ones will make the cut.

When deciding what plants to include in your garden scheme it is important to consider the plant’s needs, how much maintenance they’ll require, and of course, if they will match the rest of your garden!

This shortlist of common flowers that begin with I, should be able to help you choose at a glance which plants will look fantastic in your outdoor space!

Ice plants are a large group of around 180 species that belong to the genus Delosperma. They are flowering succulents that are mostly found in southeastern Africa. In this diverse family, plant size ranges from small, creeping clumps that are ideal for groundcover, and larger types that can reach over 1 foot tall!

The most commonly grown species in the garden is D. cooperi and its hybrids, which do extremely well in dry, sandy soils and full sunshine. This makes them perfect for rock gardens and containers! Their flowers bloom from summer until fall and are commonly pink or purple, however, other colors and color combinations exist.

The Iceland poppy or Papaver nudicaule, is also sometimes called the Arctic poppy. It is native to northern and Arctic mountainous regions in Asia. These hardy perennials can be grown in areas as low as USDA zone 2 and will flourish in cool summer climates.

Iceland poppies rank high in the list of favorite poppies due to their wide range of colors that come in vivid and pretty pastel shades! They typically bloom from May to June and have fragrant poppy-form flowers that grow as wide as 4 inches and have delicately crinkled petals. Their flowers look fantastic planted in large groups along beds and borders!

A group probably more recognizable by its common name, holly, these plants are a large group of roughly 600 species of shrubs and trees. They can be evergreen or deciduous and have a large association with Christmas time due to them being a popular Christmas decoration!

Several species are highly cultivated, more so for their distinctive red or black berries and spiky leaves! Their greenish flowers are rather unassuming and either grow alone or in small clusters. Holly is a wonderful choice for a hedge or as a specimen plant in woodland gardens.

Impatiens are a large group of plants that are found in Asia, Africa, and North America. Some of these are highly prized garden ornamentals and are favorites among gardeners as bedding plants! Impatiens flowers are technically tropical perennials; however, they are mostly grown as annuals.

Their flowers come in a wide range of colors, including purple, pink, red, yellow, and white. Some species even have different colored leaves to choose from. They do well in partial shade so are a top choice for the shadier areas of the garden or dark patio corners!

Gaillardia pulchella, or Indian Blanket Flower, are annual wildflowers that originally come from central and southern USA as well as northern Mexico. These flowers are ideal for coastal gardens as they grow well in sand and have a high tolerance of salty conditions!

Their long-lasting, showy flowers are multi-colored with shades of brown, burgundy, red, yellow, and orange. They have a long blooming season, spanning from spring until summer. Flower size is between 3 and 6 inches and they will attract butterflies into the garden! Their seeds are also a food source for songbirds such as goldfinches.

The Indian paintbrush or painted cup refers to any of the 200 species of plants in the genus Castilleja. These plants aren’t often considered for garden ornamentals as they are partially or completely parasitic, deriving their nutrients from the roots of other plants. However, these perennial wildflowers can be grown successfully and will add vivid color to the garden!

Their flowers are small and unassuming, but they are surrounded by colorful bracts that come in vivid shades of red, white, pink, orange, and yellow! Indian paintbrush flowers are highly attractive to pollinators so are good for butterfly gardens and are also well-suited for prairie gardens.

Spigelia marilandica, or Indian pinks, are brilliant perennials for enticing hummingbirds into the garden! Sometimes referred to as pinkroot, these plants are winter hardy down to USDA zone 5 and originally come from the Southeastern USA. Indian pinks are low-maintenance, will do well in either full to partial shade, and are highly tolerable of wet soils!

Their showy flowers emerge in mid-May to June, and begin as elongated, vivid scarlet buds that partially peel back to reveal a lemon-yellow starry flower! They grow as tall as 2 feet high and have green, glossy leaves. Grow them in shade gardens, woodland gardens, or shady areas alongside streams or ponds.

Indigo plants belong to a large genus of over 750 species of herbs, shrubs, and trees. Some species such as I. tinctoria, or true indigo, were once highly important to the dye industry! Nowadays, they are cultivated as garden ornamentals. With such a large genus, the plants can vary in appearance but generally have pink, purple, or white flowers that grow in showy clusters or spikes.

True indigo is a spreading tropical shrub that comes from south-central Asia. It grows between 2 and 3 feet tall, making it great for a low, informal hedge or as ground cover. Its short flower spikes are covered in clusters of rose-pink flowers that emerge in summer.

Also known as American barrenwort, the inside-out-flower has a rather bizarre yet beautiful appearance worthy of its common name! They have white or yellow flowers that hang daintily on arching stalks in groups of 10-30. The petals of each flower look almost turned backward, or inside out!

These creeping perennials are low-growing and only reach as tall as 1.5 feet, making them ideal for ground cover. Use them as edging in cool, moist areas such as woodland gardens or the shadier parts of rock gardens!

Inulas refer to any of the flowering plants that belong to the genus Inula, however, the most well-known of this group is Inula helenium, also known as elecampane. This herbaceous perennial can grow as tall as 6 feet and has showy yellow flowers. This plant is native to Eurasia and has a long history of being used as a medicinal herb. Today, the roots are still used as a flavoring for absinthe in France and Switzerland!

They are well-suited to cottage-style gardens, herb gardens, and wildflower gardens. Their sunflower-like flowers are sunshine yellow, with narrow, scraggly outer rays surrounding a darker yellow central disc. They emerge from mid-summer to early fall and can be as wide as 3 inches!

Ipheion is a small genus of flowering plants that mostly come from Uruguay and Argentina. The most well-known among the gardening world is I. uniflorum, sometimes referred to as the spring starflower, the Mexican star, or starlikes. These bulbous perennials will grow to a maximum of 10 inches high and have mildly fragrant flowers and foliage!

Flowers come in white, blue, and purple hues, and bloom over spring and summer! Each flower is borne on a solitary stalk and is a starry, 6-petaled bloom less than 1 inch across. They like full sun to partial shade, making them good for woodland margins, walkways, and mass plantings along sunny borders!

Irises are some of the most popular flowering plants worldwide and are a large group of around 300 plants! The largest concentration of species is in the north temperate zone, but beautiful specimens can also be found in the Mediterranean and Central Asia. These plants grow either from bulbs or rhizomes.

Iris flowers are very distinctive and easy to recognize, with 3 petals, 3 sepals, and 3 stigma branches. They have been highly cultivated, the most popular group being the bearded irises, which have fragrant flowers in vivid colors!

The name ironweed can be used to describe any of the 500 perennials of the genus Vernonia. They can be found worldwide as small, herbaceous perennials, although ironweed trees and shrubs are more likely to be found in the tropics. Several species are cultivated as garden ornamentals, V. noveboracensis, being a particular favorite!

V. noveboracensis, or New York ironweed is a clump-forming species that can grow between 5 and 8 feet tall, and has clusters of purple-pink disk flowers that appear in summer through to fall. These plants are low maintenance and suit a variety of conditions and garden styles including rain gardens, cottage-style gardens, and pond gardens.

Ixias are also known as African corn lilies or wand flowers. They are bulbous perennials that grow from corms and are native to Cape Province in South Africa. They have been highly cultivated for their upright and showy flower spikes, with many beautiful cultivars available.

Their flowers come in white, pink, red, purple, cream, and yellow! Their starry flowers are born in clusters on top of tall spikes and make fantastic cut flowers. Plant them en-masse with a mix of colors along borders for a stunning display!