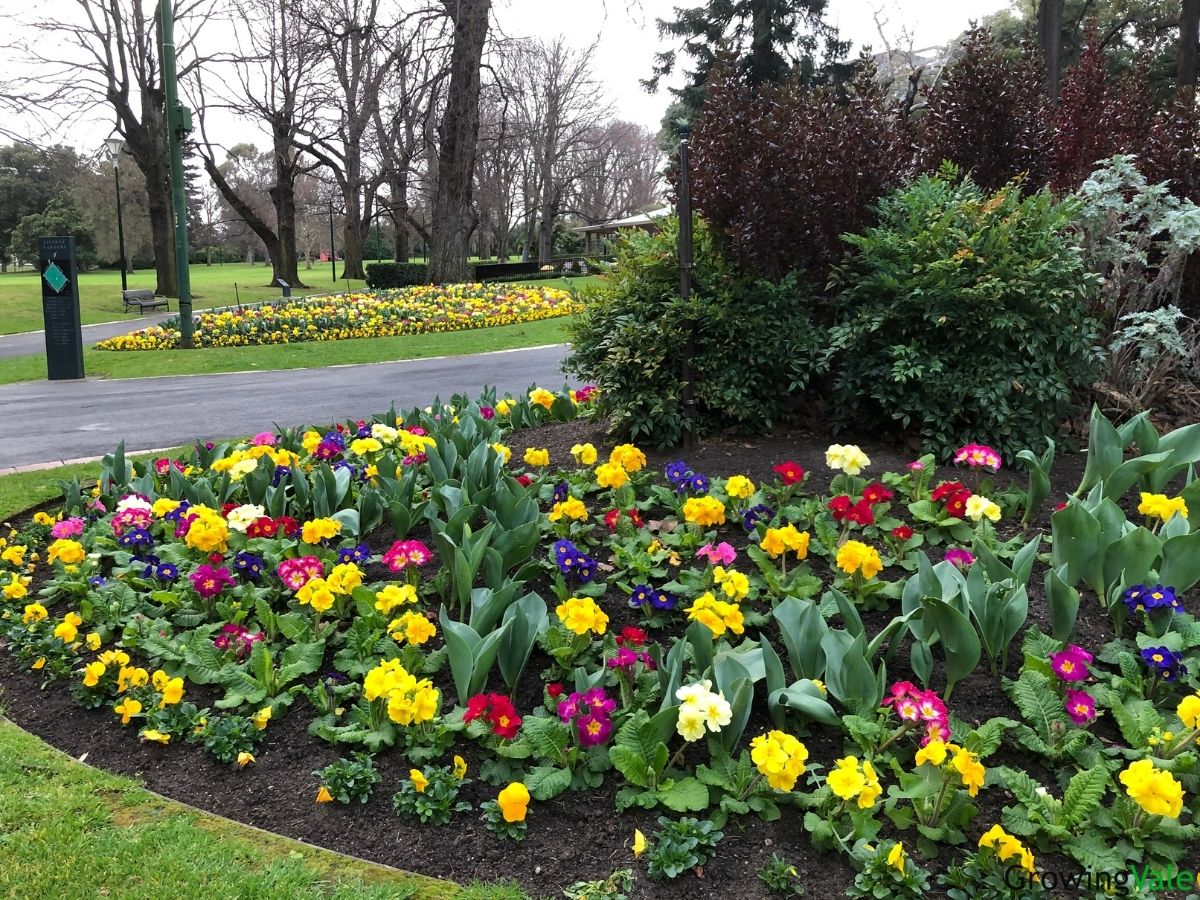 Ask anyone for a beautiful flower that begins with J and their immediate answer will probably be jasmine or Japanese anemone. Both are fantastic choices for the garden, but with so many flowering plants, shrubs, trees, and vines in the world, it couldn’t hurt to learn about some more unusual garden ornamentals!

This short list of flowering plants that start with the letter J, not only contains firm-favorites like those mentioned above, but also some more out-of-the-box flower types you might consider adding to your garden next growing season.

Jacarandas are any of the plants in the genus Jacaranda, however, the most well-known and popular types are J. mimosifolia and J. cuspudifoila. There are 49 species within the group which are natives of Central and South America, and the West Indies. The common name Jacaranda is also used for a few tree species from the Machaerium genus.

J. mimosifolia, or the green ebony tree, is an absolutely beautiful flowering tree! It is fast-growing and can reach as tall as 50 feet, with lush, bright green fern-like leaves. Under optimal conditions, it produces masses of delightful blue-purple, trumpet-shaped flowers in spring and early summer.

Jack-in-the-pulpit also goes by many other names, including Indian turnip, bog onion, or brown dragon! These plants are native to wet woodlands and thickets in North America and grow best in partial to full shade, in medium to wet soils. These unusual perennials are perfect for adding some interest to woodland, native, or shade gardens!

They have a unique appearance, with solitary flowers that sit atop their own stalks. Their flowers can be described as a cylindrical or funnel-shaped deep purple or green hood, often adorned with white stripes, surrounding the central spadix (flower spike).

Also referred to as Greek valerian, Jacob’s ladder plants belong to the genus Polemonium, and are a group of roughly 25 species that are originally from Eurasia, and North and South America. Several species inside the group are popular garden ornamentals, and are well-suited to coastal, cottage-style, and wildflower gardens! Their pretty flowers are bell-shaped and can be blue or white.

Their common name is derived from their small leaflets which have a neat, ladder-like arrangement! Generally, these plants prefer cooler conditions and are found in the wild in moist areas like woodlands or along stream banks. Jacob’s ladder plants are not drought-tolerant and will go dormant in dry conditions.

Jamaican bell flowers are incredible flowering trees that will be sure to bring a touch of the tropics into the garden! Their taxonomic name Portlandia grandiflora is named in honor of the former Duchess of Portland. These trees are slow growing but bloom young, making them ideal for container planting where they can reach a maximum height of 6 feet, although in their natural habitat they can be as large as 15 feet!

They are prized for their bold flowers that give off a chocolate scent which is strongest in the morning and evening. Their trumpet-shaped flowers can grow 5-6 inches long and are white, sometimes tinged with pink. Under the right conditions, they flower from spring until fall. Plants usually begin as a single stem, becoming more shrub-like with maturity.

The Japanese anemone, Anemone x hybrida, or Eriocapitella x hybrida, is a herbaceous perennial and an extremely popular flower for the garden! They are hybrid cultivars that flower from late summer to fall, are perfect for cottage-style borders, perennials flower beds, and woodland gardens. Their flowers look sensational when planted in large groups, and look especially lovely alongside hostas and ferns.

Japanese Anemone flowers are single, with 6-9 overlapping petaloids surrounding a green center with a ring of golden-yellow stamens. Flowers can grow as wide as 3 inches, and generally come in delicate shades of white and pink, but may also be red, purple, and yellow-green! They do best in partial shade and are winter hardy to USDA zones 4-8.

Iris ensata, or the Japanese Iris, can be found across Asia from Siberia to Japan. They have a long history in Japan, where they have been cultivated for over 500 years! These perennials can grow as tall as 4 feet, and prefer full sun conditions to partial shade, and thrive in standing water, although they can grow well enough in moist garden soil.

They are perfect for rain gardens, pond landscaping, or patio gardens (provided they get enough moisture). Their flowers are extremely eye-catching and can grow as wide as 10 inches! They can be single, double, or peony flowered and come in a range of bold shades such as blue, white, pink, purple-red, and lavender!

The Japanese Toad lily, or Tricyrtis hirta, is native to the Japanese islands of Honshu, Kyushu, and Shikoku. Over the last 20 years, they have become increasingly popular due to their orchid-like flowers, leading to several new hybrids and cultivars being bred in the US and Japan! They love partial to deep shade and do well in shade gardens alongside hellebores, hostas, and ferns.

They are herbaceous perennials that grow as tall as 3 feet and have simple, green leaves that grow in a ladder-like arrangement. Their exquisite flowers appear from summer through to fall either alone, or in small clusters of 2-3 flowers. Their flower shape resembles an orchid, and is commonly pale lilac or white, heavily spotted with dark purple.

Jasmine flowers, from the genus Jasminum, are extremely popular due to their heavenly scent! There are roughly 200 species in the group, which consists of shrubs and vines and is a part of the olive family, Oleaceae. They are originally from tropical and temperate regions of the Old World, with several species being well-loved garden ornamentals, especially for coastal gardens!

Jasmines can be evergreen or deciduous, with glossy green foliage. They typically have white, yellow, or more unusually pink flowers that are flared with a pin-wheel form and have a tubular base. However, attractive, double-flowered cultivars have been developed. J. officinale, or the common jasmine, is the most famous in the group and is the source for the signature jasmine flower scent used in perfumery.

A somewhat unusual choice for the garden, Jerusalem artichokes are typically grown in vegetable gardens for their edible tubers which are said to taste like artichoke! However, this hasn’t stopped some gardeners from adding them to their cottage-style, wildflower, and butterfly gardens! These herbaceous perennials are easy to grow in average soils and do well in full sun to partial shade. They can grow to an astonishing 10 feet tall, and flower from August to September.

Jerusalem artichokes are also fantastic for wildlife, as their flowers are attractive to butterflies and their seeds are a favorite food of native American songbirds such as finches! Their cheery sunflowers can grow between 2 and 4 inches wide and have bright yellow outer rays, surrounding a darker yellow center. Perfect for brightening up borders!

Impatiens capensis or jewelweed is a herbaceous annual native to northern America! Their specific epithet, capensis, means “of the Cape” because these plants were mistakenly thought to have come from South Africa! They can normally be found in areas that have moist soils, such as along streams, in boggy areas, or woodlands. They thrive in dappled to deep shade, and love moisture, lending them particularly to bog gardens, pond landscaping, and woodland margins!

Their common name jewelweed refers to the dew or rain beads that get caught on their leaves, forming sparkling droplets. They have unusual yet attractive flowers that look like a golden orange cornucopia with reddish-orange spotting on the throat and hood. Their flowers grow between 1 and 3 inches across and hang down on their own individual stalk.

Joe Pye weed is a hugely popular perennial that is prized for its wonderful and showy flower clusters! They are native to eastern and central North America and are typically found growing in open woodlands. These easy-to-grow plants look amazing in cottage-style, meadow, and native gardens! They are brilliant for adding height to borders since they can reach as tall as 7 feet!

From July to September, they produce huge, fragrant clusters up to 18 inches wide, made up of 5-7 florets. Flowers have a sweet vanilla fragrance and are a delightful shade of purple pink. After the blooming season is over, their flower heads transform into attractive seed heads that add some winter interest to the garden! Joe Pye weed flowers look particularly stunning when planted in large groups at the back of borders.

Justicia plants from the genus Justicia, make up a large group of around 600 species and still counting in the Acanthaceae family. Some members of this genus are hugely popular as garden specimens which are characterized by their unique and vividly colored flowers! Of these, many are warm-weather perennials and would make wonderful additions to tropical garden schemes.

The Brazilian plume J. carnea is a firm favorite of the group, and is an evergreen shrub with 8-inch long, showy flower plumes that are a pretty flamingo pink! They are great for tropical gardens but also make good houseplants for colder climates! Another popular member of the group is J. rizzinii, or the firecracker flower. It has dropping, long, tubular flowers with red bases and yellow tips that are great for attracting hummingbirds!

See more types of flowers with pictures you can grow.