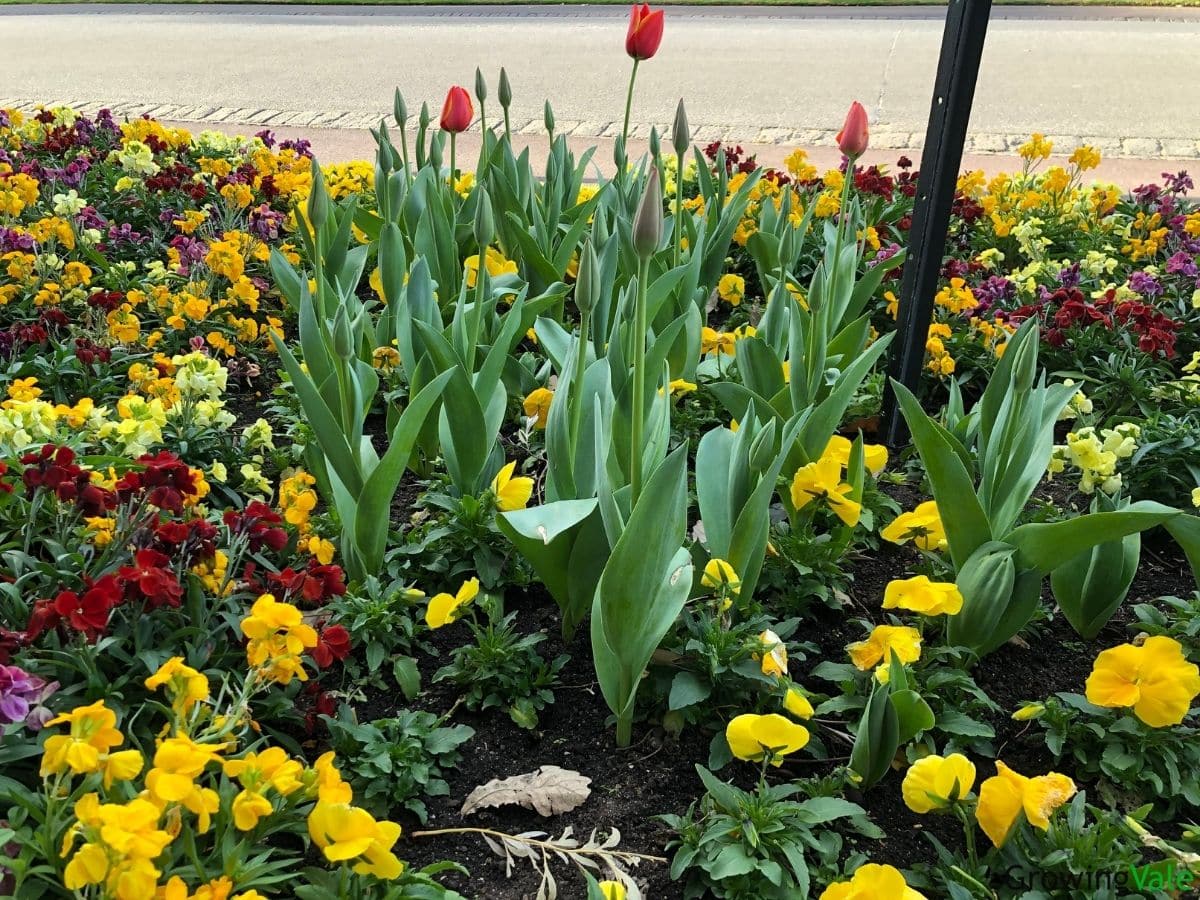 Maybe you’ve looked out at your garden recently and realized you would like a change, or you’re new to the gardening world and are keen to get started on your dream outdoor space!

Either way, it is no secret that there is a huge selection of enchanting plants worth adding to any collection, but knowing their growth habits, colors, and care needs are important for making sure they fit in nicely and will perform at their best in your garden.

This little list of flowers that start with M contains some well-known garden favorites, as well as some more obscure yet equally beautiful plants. Hopefully, you will find a few flower species that get your attention and could perhaps make an appearance in your garden in the near future!

Magnolias are a highly popular group of flowering shrubs and trees that are found worldwide in North and South America, the Himalayas, and East Asia. They belong to the genus Magnolia and are about 240 species in total. Many gardeners love them for their large, goblet-shaped flowers that have a wonderful fragrance!

These lovely plants are either evergreen or deciduous and vary in size from over 100 feet tall to 6 feet tall. Smaller varieties can also be grown in containers! Their beautiful flowers come in a variety of shades from white, pink, yellow, and reddish-purple.

Mandrakes from the genus Mandragora, are a small group of 6 plants from the nightshade family that possess hallucinogenic properties. They originally come from parts of the Himalayas and the Mediterranean and have long had an association with superstitions and religious practices.

They have bell-shaped flowers with 5 petals and range from soft purple to yellow-green. Mandrakes are low-maintenance plants that require little pruning, and their mysterious flowers look fabulous in cottage-style and rock garden borders! After their flowering season is over, these perennials will produce fleshy orange-colored fruit.

These cheery plants are firm-favorites in the gardening world! Though marguerite daisies are shrubby perennials originally from the Canary Islands, they are often grown as annuals so they can be enjoyed in colder climates. They have daisy-like flowers that grow well in containers as well as beds and borders, making them a top choice for bringing color into patios and balconies!

Their sunny flowers grow as wide as 2.5 inches and can be white, yellow, or pink, with sunshine yellow centers. Double-flowered cultivars are also available. Marguerite daisies have a long, summer blooming season and perform best in full sun conditions, however, flowering may slow down in extremely hot climates.

Marigolds are the perfect choice for bringing bright color into the garden! There are roughly 50 species in the genus Tagetes, all of which are annuals. These plants are extremely well known in the gardening world, not only as pretty ornamentals but also as fantastic companion plants for a variety of vegetables!

Their flowers usually come in rich, warm tones of red, orange, and yellow, however, more rarely, they can be cream, striped, or even bi-colored! They bloom all summer long and have either solitary or clusters of flowers which can have anemone, daisy, or pom pom forms.

Marsh marigold, which is also called cowslip, is a pretty little perennial plant found in northern temperate regions. Its natural habitats are wetlands, making it a top choice for pond landscaping or bog gardens! They can be grown in full sun to partial shade but will flower best when planted in sunny spots.

They grow to a maximum height of 1.5 feet, and have showy flowers that contrast nicely with their foliage! Their flowers emerge in spring and are bright yellow with a central tuft of buttery yellow stamens. Marsh marigolds are a part of the Caltha genus and the buttercup family,  Ranunculaceae.

Althaea officinalis or the marshmallow plant is a herbaceous perennial belonging to the mallow family, Malvaceae. Their common name is derived from their use historically in the making of marshmallows! They can be found in coastal and marshy areas of Northern Africa and Eastern Europe.

They have pale pink flowers with showy purple-pink stamens that bloom over summer. They may grow as tall as 6 feet and look best in informal garden settings such as cottage-style or coastal gardens. Plant them in moist soils under sunny conditions!

Meadow rues are a large group of roughly 330 species that belong to the genus Thalictrum. They are easy-to-care-for herbaceous perennials that have a wide range of growth habits, flowers, forms, and needs, making them an extremely versatile bunch and suited for a range of garden styles!

Their flowers appear from spring to fall depending on the species, and are known for their lack of petals! Their blooms either have petal-like sepals or consist of a large group of stamens. They tend to do best in moist, well-drained soils, and can prefer either full sun or shade depending on type!

Poliomintha longiflora or Mexican oregano is native to northeast Mexico and Haiti and does extremely well in hot and humid climates. This bushy perennial is often grown as an annual in colder climates, with a final height and spread of up to 4 feet. Grow it in herb gardens or as a patio container plant for easy access to its leaves which are a key ingredient in many Mexican dishes!

From summer through to fall, this delightful plant produces an abundance of showy, tubular, long purple-pink flowers. Their flowers are attractive to hummingbirds and make a pretty addition to the garden. Overwinter container plants indoors in a sunny spot to keep them year after year.

The Mexican hat plant or Kalanchoe daigremontiana is also called the devil’s backbone and mother of thousands. It belongs to the genus Kalanchoe, which contains a number of succulents that are popular as indoor houseplants and outdoor summer plants! Take care not to confuse it with other plants that can carry the same common name.

This interesting-looking perennial has an upright growth habit with gray-green, triangular lance-shaped foliage that may have brown spotting. The leaf edge is lined with a row of plantlets that become tubular pinkish-gray flowers that open over winter. The Mexican hat plant makes an interesting addition to patios in the summer!

The Mexican sunflower, Tithonia rotundifolia, is a member of the daisy family, Asteraceae, and is a part of the small genus Tithonia. It is a drought-tolerant, bushy annual found in Mexico and Central America that is easy to grow.

These plants can grow between 4 and 6 feet, with dark green leaves and a long blooming season. Plants flower from midsummer through to the frosts, with numerous daisy-like flowers in vivid shades of yellow to dark orange with sunshine yellow centers. Their flowers are highly attractive to a wide range of pollinators and make great cut flowers!

Million bells, also known as the Calibrachoa group, are herbaceous perennials and cottage garden staples! They have a wonderful trailing habit that makes them perfect for hanging baskets or window boxes, where their flowers and leaves tumble down in a pretty fashion. Million bells are prolific bloomers, with hundreds of small, 1-inch, petunia-like flowers emerging from spring through to the first frost.

These plants belong to the nightshade family, Solanaceae, and are winter hardy in USDA zones 9-11, so are often grown as annuals in colder climates! Their delightful flowers come in a wide range of vibrant shades, including white, pink, red, purple, blue, and yellow. They are low-growing, making them well suited for ground cover. Plant them en-masse in garden beds and borders for a bright display!

Mist Flowers or Conoclinium coelestinum, are late-summer to fall perennial bloomers that can be found in the Eastern USA. They are similar in look to the annual ageratum and are also referred to as the hardy ageratum. These delightful plants have extremely nectar-rich flowers making them a favorite for pollinators and fantastic additions to wildflower or meadow gardens!

They can be grown in full sun to partial shade and can withstand occasional flooding and moist conditions. This makes them particularly useful for pond landscaping if they are given enough space. Mist flowers have an almost fluffy appearance and come in soft shades of blue, pink, and lavender!

The common name monkey flower refers to flowers of the genera Mimulus, Diplacus, and Erythranthe. They are woody perennials, most of which are short-lived and often grown as annuals. Monkey flowers have distinct, funnel-shaped, two-lipped flowers that can be cream, pink, purple, red, yellow, orange, and even brown! They are spring to summer to fall bloomers and, depending on the species, have different care needs.

Of the 150 or so species, some have been cultivated for ornamental use, including M. ringens or the Allegheny monkey flower, which is a particular favorite for pollinator gardens due to them hosting Common Buckeye and Baltimore Checkerspot butterflies in their native range of North America. Their flowers come in hues of pink, purple, blue, and red, and grow in pairs along slender stalks.

Monkshood, also called wolfsbane or aconite, is a group of over 200 perennial plants in the genus Aconitum, and the buttercup family, Ranunculaceae. They have showy flowers, some of which have been heavily cultivated as garden ornamentals despite their reputation as extremely poisonous plants! Their common name wolfsbane comes from their use in the past as bait for killing wolves.

They have hooded flowers that can be purple, blue, yellow, or white, and grow in loose clusters on short spikes. They generally prefer partial shade and do well in rich soils. Monkshood plants are great for pond landscaping or stream edging, but care should be taken in households with small children and pets.

Moonflowers, or Ipomoea alba, are tender perennial vines that are native to Central and South America. They are winter hardy to zones 10-12, so are grown as annuals in cooler regions. Their common name is after their beautiful, large, white flowers that open at night and give off an intoxicatingly sweet fragrance!

They grow rapidly once established and can climb to heights of 15 feet with a spread of 6 feet. Moonflowers are summer to fall bloomers and are known for attracting nocturnal moths. These delightful plants grow well in containers, making them easy to overwinter in colder climates.

Persicaria amplexicaulis or mountain fleece is a herbaceous perennial with a clumping and spreading habit. It is native to the West Himalayas but is extremely popular in Europe as a garden ornamental. From June to September it produces tiny deep pink to white flower clusters on thin spikes.

It prefers constantly damp soils and will tolerate occasionally wet soils making it great for boggy areas or as pond landscaping. Mountain fleece also works well in cottage-style garden borders or in cutting gardens as their flowers are long-lasting once cut. There are several cultivars with different colored foliage, flowers, and heights.

Mountain mints are a group of easy-to-grow perennials in the genus Pycnanthemum. They are native to North America and are a part of the mint family, Lamiaceae, so their leaves give off a strong mint fragrance when crushed and can be used in cooking or for making tea. Their flowers grow in small, dense clusters of white to purple tubular blooms that grow above modified leaf bracts.

These delicate plants are summer to fall bloomers that will attract all manner of pollinators into the area making them a top choice for pollinator gardens, as well as herb, cottage-style, and native garden schemes. Mountain mints grow well in both full sun to partial shade and can do well in a range of soil types.