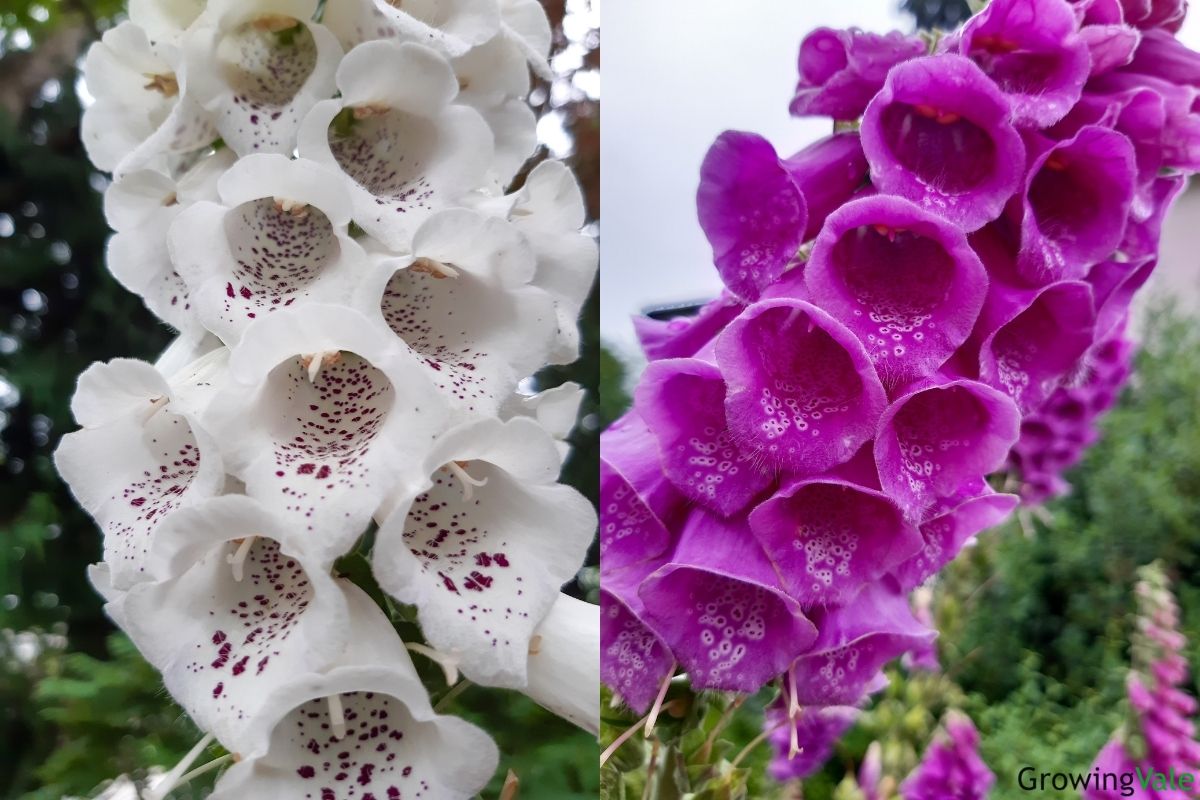 Digitalis purpurea has many names including Common Foxglove, Fairy Gloves, and Fairy Bells. The names themselves are enough to conjure up images of magical woodlands and fairytale gardens, which makes these beautiful plants one of the best choices for cottage-style or woodland gardens.

Common Foxgloves are herbaceous biennials or short-lived perennials that are widely naturalized throughout Western Europe. They can often be found growing in woodland clearings or along country roadsides, and in some areas are even considered as weeds. However, their abundance is far from offputting as these beautiful flowers bring delight to any outdoor space.

References to Foxgloves date as far back as the Anglo Saxon period, showing that these beautiful flowers have been captivating people’s curiosity for a long time. Mystery and lore surround the Common Foxglove such as the myth that they “can both raise the dead and kill the living”. This most likely stems from the fact that Foxgloves are poisonous but also have medicinal properties.

The origins of the name “Foxglove” are still debated to this day. The name could be about the fact that the flowers look like the cut-off ends of gloves, but a more interesting origin story is that people once believed that foxes would wear the flowers on their paws to silence their movements while hunting in the forest.

Nevertheless, wherever the name did come from, its taxonomic name has a much more simple explanation. “Digitalis” means finger and “purpurea” means purple, a clear reference to Foxglove flowers.

Common Foxgloves can grow up to 5 feet tall. Their flowers grow along one side of a tall spike in a narrow cluster. Flowers are a rich, pink-purple tubular bell, with white ringed purple spots on the inside.

They can grow up to 3 inches long, decreasing in size as they get closer to the tip of the spike. The flowers are attractive to bees and hummingbirds. Leaves lie close to the ground and are hairy and oval-shaped with a toothed edge.

How to Plant and Grow The Common Foxglove

Foxgloves should be planted in the spring or fall. Plant seedlings from the previous year in spring, and larger plants in fall. Foxglove flowers look most striking when grown in a group of at least 10 plants, however, make sure to leave space between them as overcrowding can increase the chances of disease and limit their growth.

Their enchanting flowers, which bloom from early to mid-summer, look most striking against a solid background such as a garden wall or fence. These plants also look very bold as the tall centerpiece in a perennial flower bed or shade garden. The Common Foxglove is a biennial and flowers in its second year.

Growing Foxgloves in a Bed

During site selection, make sure to pick a sheltered spot as these plants will grow tall and could be damaged in windy conditions.

Dig holes in the garden bed, making sure to space them at least 12-24 inches apart to prevent overcrowding. Holes should be deep enough to house the roots of the seedling. Place the Foxglove seedling into the hole and cover with soil, pat down, and water well. Newly planted seedlings should be watered sparingly but often (around 3 times a week) until the new plant is fully established.

Growing Foxgloves in a Pot

Make sure to choose a large enough pot with a good number of drainage holes. Foxgloves cannot tolerate water-logged soils. The potting mix should compose of light, sandy or loamy, acidic soil with high nutrient content. Plant seedlings similarly as you would if they were in beds. Water twice weekly, and place the container in a shady spot that receives full sunlight.

Gardeners in cold climates may need to overwinter their Foxgloves in the house. Place the container in a room with moderate sun exposure. Take care not to overwater during winter.

First, either buy or collect your Foxglove flower seeds. To collect seeds from your existing plants, make sure not to deadhead your flowers before they go to seed. Harvest your seeds by gently shaking the dried, brown seed pods over a container. Seed pods should be beginning to split. After collection, deadhead any remaining flowers as Foxgloves self-seed regularly and unharvested pods could result in numerous unwanted seedlings the next year.

Seeds can either be scattered in the desired location, or sown into a tray of seed compost. They do not need to be covered by any compost, just covered with a lid. Seedlings in trays should be overwintered in a  greenhouse or a cold frame. Plants seedlings the following spring.

The Common Foxglove plant can grow in almost any type of soil. But it prefers moist, acidic, and humus-rich soils. Soil should be well-draining as it will not tolerate very wet conditions, but the soil should not be allowed to dry out either.

Water Foxgloves roughly twice a week, but bear in mind that they will need more water during the warmer months, especially if they are blooming. A close eye will need to be kept on those grown in containers to make sure the soil is kept moist and doesn’t dry out. Take care not to water them too much as overly wet soil is also a problem for these plants.

When watering, water the base of the plant and avoid getting the leaves wet, as Foxglove plants are susceptible to fungal diseases.

Applying fertilizer to Foxglove plants is not necessary, but adding a layer of mulch to the flower bed will help to keep your plants looking in top condition and retain moisture in the soil. Common mulch types include shredded leaves, pine needles, wood chips, or shredded bark. Any of these are suitable and should be applied in a two-inch layer once the plants start growing in spring. This applies to Foxglove flowers grown outdoors in beds or containers.

Since their native habitat is in woodland clearings or along hedgerows, Common Foxgloves are used to dappled shade. They will tolerate full sun, but partial shade is recommended for them to thrive.

Common Foxgloves are native to regions that experience distinct summers and winters, and they are hardy USDA zones 4-8. They can tolerate both dry and humid conditions, but care should be taken to allow airflow between plants in humid environments to prevent the chances of fungal diseases.

Foxglove plants can get infected with leaf spots and powdery mildew. If left untreated, foliage can become unsightly by early to mid-summer. Avoiding excessive moisture on foliage, and having good air circulation between plants can limit the chances of these diseases developing.

Pest-wise they can be affected by aphids, mealy bugs, slugs, Japanese beetles, and leaf and bud eelworm.

In optimum conditions, Foxglove flowers will freely self-seed and possibly become a nuisance. It is recommended to deadhead flowers before seeding to prevent this from happening. Most gardeners will deadhead the majority of plants, but leave a few to self-seed to maintain a permanent planting in the garden as if the Foxgloves were perennials.

Foxglove plants contain a substance called cardiac glycosides, which means that all parts of the plant are highly toxic if ingested. The symptoms of this severe poisoning include nausea, headaches, diarrhea, kidney problems, and heart problems. Leaves can irritate the skin, so always wear gloves and thoroughly wash your hands after handling them.

Uses of the Common Foxglove

Foxglove plants are widely used in traditional folk medicine, but they also have a place in modern medicine. The drug Digitalis (which belongs to a group of cardiac glycosides), is derived from Foxglove leaves. Its most common use is for treating patients with congestive heart failure by restoring heart circulation.

There are several varieties of Common Foxglove, all of which have similar care and maintenance needs:

The Common Foxglove is a beautiful and mysterious plant that has been captivating people for hundreds of years. Surrounded by myth and folk-lore, these flowers will look right at home in cottage-style gardens or woodland environments.

These plants will grow easily in most soils, although they prefer moist, acidic, and humus-rich soils, and thrive in partial shade. Common Foxglove plants are biennials and readily self-seed if not tended to. They can be grown in beds or containers, and look very striking against walls and fences, or as the centerpiece in perennial flower beds.

Common Foxgloves are toxic. Take care when handling, always wear gloves as they can irritate the skin, and do not ingest under any circumstances. Interestingly, the toxic substance found in their leaves is used in modern medicine to create drugs that treat heart failure.

Over the years many different Common Foxglove varieties have been bred, each as beautiful as the last, giving plenty of choice to gardeners who would like to add this delightful plant to their collection.