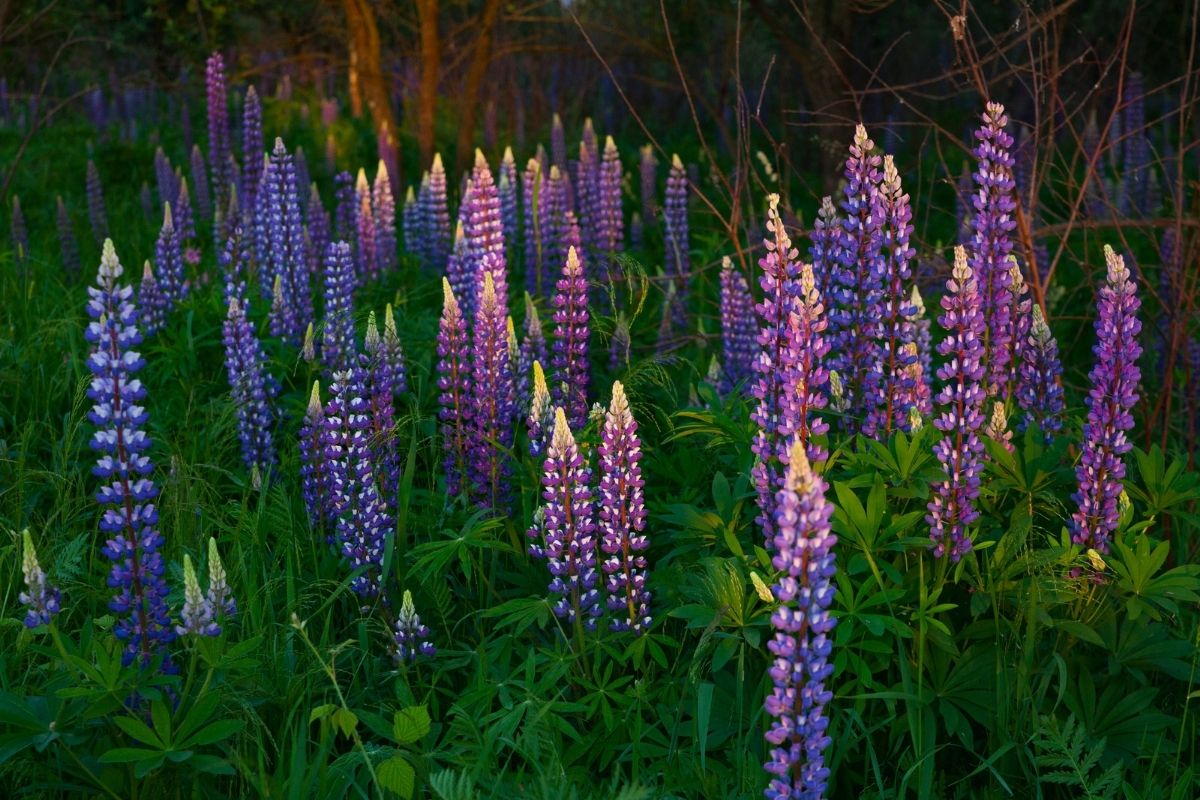 Lupines, more commonly known as lupins, are a group of around 200 herbaceous and partly woody plants that belong to the genus Lupinus. They are members of the pea family Fabaceae, alongside sweet peas and edible peas! Most wild species are not particularly suited to being grown as ornamentals, however, a large number of hybrid lupins have been bred for this very purpose, and are classified as L. x hybrida.

These plants have different growth habits and can either be “border lupins” – perennials or annuals suited for beds, borders, and containers; or “tree lupins” – evergreen shrubs. Lupins are highly popular plants among novice and seasoned gardeners! They are a staple in any cottage-style garden bedding scheme, but more flamboyant varieties will also look fantastic in tropical gardens!

Lupins can be found growing throughout the Mediterranean, but are also extremely widespread among the prairies of the western US. The Texas bluebonnet, L. texensis, is a highly popular lupin species in the US and covers vast areas of southern and western Texas in a blanket of beautiful blue flowers during the blooming season. It is also one of the state flowers of Texas!

The genus name Lupinus is said to be derived from the Latin name for wolf, “Lupus”, as lupins supposedly deplete or “wolf” the surrounding soils of minerals. However, they do the complete opposite and improve the soil conditions by fixing nitrogen! In fact, the white lupine, L. albus, is commonly used as a cover crop to increase the nitrogen levels in the soil!

Herbaceous lupins can grow as tall as 4 feet and produce tall, upright spikes adorned with brightly colored flowers. These are border lupins that have been heavily bred and cultivated to produce numerous wonderful varieties that can have white, pink, red, purple, blue, yellow, orange, or multicolored flowers! Tree lupins are woody shrubs that can reach heights of 6.5 feet and typically have yellow flowers.

How to Plant Lupins

Lupins can easily be purchased as plant plugs, which will require extra care while they are small for several months before they will be large enough to plant out successfully. Larger, ready to plant specimens in containers are also available. Seed mixes can be bought online and in nurseries.

Plant lupins in the spring or early summer. Prepare the soil by de-weeding, then dig holes just deep enough and wide enough to comfortably house the root ball. Gently remove the plants from their containers, then carefully tease the roots to encourage them to spread outwards while growing.

Place the plants in the hole at the same depth they were at in their containers and fill in the soil. Press the soil down to remove any air pockets and water well to settle in.

For tree lupins, follow the same recommendations, but dig the hole as deep and three times as wide as the container. Firm down the soil around the lupin shrub without pressing on the root ball itself, and after watering to settle in, add a 2-3 inch layer of mulch, leaving 4 inches of mulch-free space around the base of the stem.

For soils that are not well-draining and run the risk of becoming water-logged, or in particularly cold areas that receive a lot of rain, consider growing lupins in containers instead.

Select a deep container with a good number of drainage holes. Lupin plants have a deep taproot, so growing them in a deep pot is essential. Fill it with a loam-based compost with added perlite to improve drainage, or use a homemade mix of one part garden compost and two parts garden soil, with added general-purpose fertilizer following package instructions.

Plant them in spring or early summer, but planting in early spring will help them to become established more quickly. Follow the above recommendations for planting and water well to settle in, adding more compost if needed. The final soil level should be at least 1-inch below the top of the pot.

Water plants regularly during the growing period, and feed weekly with a potassium-rich fertilizer following the manufacturer’s recommendations.

Roughly every 3 years, the lupin plants will need repotting to prevent poor performance. Relocate them to a container that is only marginally larger.

How to Propagate Lupins

Lupins can be propagated through cuttings, seeds, and division. Division is not always recommended as these plants have a deep taproot which makes division more difficult, and over-dividing can result in poor flowering.

Use a sharp, clean knife to take 3-4-inch softwood cuttings as close to the base as possible. Greenwood cuttings should be 3-5 inches long and will feel firmer at the base.

Remove lower leaves and pinch out the soft tips. Dip the ends in either liquid or powder rooting hormone. Make holes in the compost before inserting the cuttings with their top leaves just above the soil line. Water well.

Place the tray or pot in a propagator with a bottom temperature of between 64 and 75°F, or cover with a plastic bag. Keep them in an area with indirect sunlight. Ensure the soil remains moist, and remove the plastic bag twice a week for 10 minutes for ventilation. Be mindful, as too much humidity will rot cuttings.

Within 2-4 weeks the cuttings will be rooted and need to be hardened off for another two weeks before being individually potted and planted out once they are firmly established. Harden them off by increasing their ventilation time so they can survive lower humidity environments.

Seeds should be sown in early to mid-spring. Many lupin plants will grow true from seed so harvesting seeds from existing plants or purchasing them are both excellent options. Growing lupins from seed is not always successful, as seeds are prone to rotting in overly damp conditions, and transplantation does not always work as they do not like their roots to be disturbed.

For the best results, nick the seeds with a sharp knife and soak them in water for 24 hours before sowing. Sow them in a tray of moist, sterile compost and cover them with a thin layer of compost. Gently water them and place them in a warm spot at 50-59°F with a plastic or glass covering. Expect germination in 10-14 days. Once the first pair of true leaves appear, pot them individually. They should bloom the following year.

Here are some lupin care and maintenance tips:

Lupins should be planted in well-draining soils and prefer soils that are low in nutrients.

Newly planted lupins will require regular watering during the summer while their roots are establishing, particularly during dry, hot periods.

Once they are firmly established, those grown in beds will rarely need watering as they are mildly drought tolerant, however, during long periods of drought they will need some water. Water plants at the base to lower the risk of fungal infections.

Container-grown plants will need regular watering during the growing season.

They do not need feeding, but if flowering is poor, fertilize them with a potassium-rich fertilizer following the package recommendations. Container-grown plants will require more frequent feeding.

Plant lupins in an area that will receive full sun as flowering will be poor in shady spots. In places that experience hot summers, they will however benefit from some light afternoon shade.

Watch out for slugs and snails, especially on new shoots, and lupin aphids. Lupin aphids can be particularly problematic, and plants should be checked from spring onwards for any signs of these pests.

Regularly check for infected foliage and remove promptly. Heavily infected plants should be dug up and disposed of immediately, ensuring no trace is left on the soil. Spacing plants far enough apart for good air circulation helps reduce the risk of fungal infections.

Deadhead spent border lupin flower spikes down to the ground to encourage the production of more spikes. After the border lupins have died down at the beginning of winter, the leaves may be trimmed to keep the border looking neat and tidy.

Lupins grown in well-draining soils generally can be left in the ground over winter as they are hardy, but it is recommended to check the tolerance of individual types or cultivars before purchasing them. Cover them with a layer of winter mulch (either well-rotted manure or garden compost) for added protection from the cold.

During winter, move container-grown lupins to a sheltered position either next to a wall, in a cold frame, or in an unheated greenhouse to protect them from excessive rain. Plants left standing in cold, damp conditions for prolonged periods are susceptible to root rot.

Lupins contain a toxic alkaloid called lupanine which makes them poisonous to people and animals. Symptoms include confusion, dizziness, and dilated pupils. Always keep an eye on children and pets in the garden, and wear gloves and wash hands after handling.

Lupins are primarily used as garden ornamentals and are highly prized among gardeners. However, in addition, species such as L. albus have been cultivated in the Mediterranean since before 2000 BC for use as green manure, animal feed, and human consumption. They were also used for cosmetic and medicinal purposes.

Today they are still widely used as green manure and animal feed, as well as being a staple in parts of the Mediterranean and the Andean highlands. Lupins are considered to be toxic, so always thoroughly research and conduct a medical professional before attempting to consume them.

With so many wonderful lupine flower types to choose from, here is a list of some of the most popular species and cultivars:

Lupines, which are commonly called lupins belong to the genus Lupinus, and the family Fabaceae. They are a group of 200 plants that can be found growing wild in parts of the Mediterranean and across the western US. There are a few wild species suited to being grown in the garden, but many popular lupins are hybrids belonging to the group L. x hybrida.

The majority are herbaceous and suited for borders, beds, and containers. These “border lupins” are either annuals or perennials. “Tree lupins” on the other hand are evergreen shrubs. Lupins have pea-like flowers that come in many colors such as white, pink, orange, blue, and more! Some varieties even have two or three colors!

Lupins are mostly used as ornamental plants, but some species are used as green manure due to the lupin’s nitrogen-fixing properties, as animal feed, and for human consumption. However, these plants are toxic so thorough research is extremely important before any consumption.

They are very popular for cottage-style gardens but more vivid types are suited to tropical gardens too!

Up next: Lupine Flower Meaning and Symbolism

Abraham et al. (2019). The Use of Lupin as a Source of Protein in Animal Feeding: Genomic Tools and Breeding Approaches