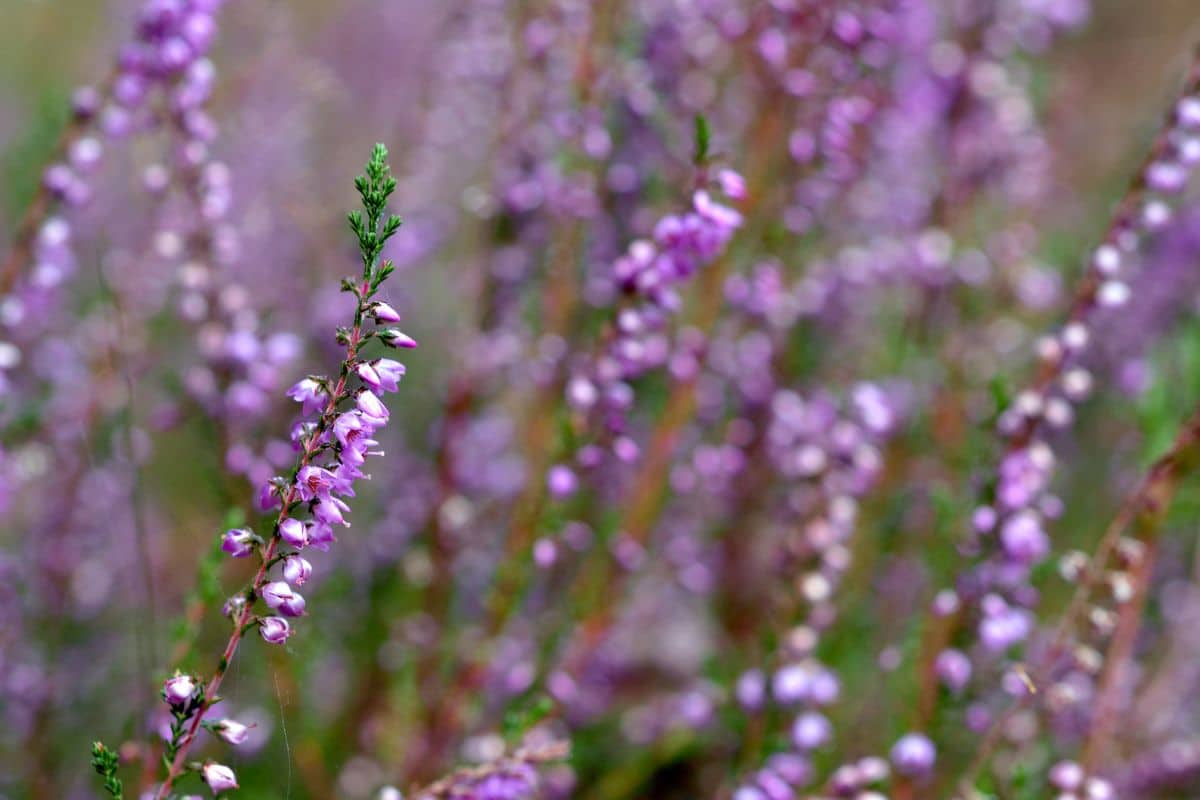 Heather is a delightful small woody shrub that hails from the moors of Scotland. In late summer and fall, each small bush is adorned with masses of small bell-shaped flowers.

However, in the northern hemisphere, heathers can bloom from late July right through until November.

The heather flower prefers acidic soil that is well-drained but moist. Although heathers are in the same family as true heaths, they differ slightly in the structure of their flowers.

Although heather flowers are native to Scotland, they also grow naturally in Ireland, Scandinavia, Russia, and even North America. Nowadays, heather flowers have become naturalized in other parts of Western Europe as well as in Morocco, Turkey, and Siberia.

Heather flowers are considered a sign of good luck, especially in Scotland and England. In fact, the Scottish clan, Clan Ranald, had the belief that wearing the white heather flowers during battle helped them to win.

Famous author, Robert Louis Stevenson, even wrote a poem about heather titled ‘Heather Ale’. This poem depicted the story of how the Vikings defeated the Pictish king in an attempt to gain the recipe for heather ale.

How to Plant and Grow Heather in your Garden

The heather flower is fairly easy to grow as long as you give it the right conditions when planting. Heathers are ideal for growing in rock gardens, as border plantings, or as pretty ground covers.

To ensure that you get young plants that are identical to the parent, you should propagate heather using stem cuttings.

The cuttings should be taken in summer but they should be kept indoors until the end of winter and then planted outside in early spring.

Here’s how to propagate the heather flower:

Note: It was originally advised to grow heather cuttings using peat moss but these days, modern gardeners and horticulturists avoid the use of peat moss in order to protect the peat bogs from extinction.

It’s also possible to grow heather from seeds, however, with cultivars and hybrids, the seeds will not produce heathers that are the same as the parent plant.

Heather plant care is fairly easy even in poor soils as long as they have good drainage.

Heather can survive quite comfortably in rocky and even poor soil as long as the soil is well-drained. However, it does prefer adequate moisture and acidic soil. The plant will also thrive in sandy soils as these are part of its natural environment.

Heather plants should be watered at least once a week when they’re young. In fact, they require around 1 inch of water every week.

Once the plant has become fully established, you can relax a little with the watering if you live in USDA zone 4. However, gardeners in warmer zones need to continue to water their heather plants on a weekly basis.

As long as the soil in your garden has had some organic matter added to it, you really don’t need to give heather any additional fertilizer. However, you can use a fertilizer designed for other acid-loving plants such as azaleas and rhododendrons in early spring but never before winter. Overfertilizing your heather will result in a leggy plant with spindly branches.

In USDA zones 4 to 5, you can grow heather in full sun. However, if you are in USDA zone 6, you should give your heather plants some afternoon shade.

Because heathers originate from the Scottish moors, they do prefer cooler temperatures and can even be grown in USDA zone 3 if they’re given protection from snow cover or extreme frost by covering them with mulch.

Heather flowers will not tolerate warm temperatures or humidity.

Pruning is required to give your heather plants a more compact shape and to stop them from becoming too leggy. The best time to prune is in early spring.

Heather can be prone to attacks of powdery mildew. While this fungal disease will not kill your plant it does look quite unsightly. Although powder mildew is not all that common in areas with low humidity, you should avoid getting the foliage wet when you water your plant.

The other problem that could affect your heather plants is root rot. That’s why it’s important to ensure that your heather is planted in well-draining soil so that the root system is not sitting in water.

The heather flower, as well as its leaves, have been used to make tea. This tea was commonly consumed by people to treat kidney stones and urinary tract infections.

In Scotland and other parts of northern and western Europe, branches of heather foliage were used for making brooms.

There are numerous different varieties and cultivars of the heather flower and these will also have slightly different foliage. Some of these will grow into mounded shrubs while others become matted ground covers and are ideal as low-growing vegetation under taller trees.

A few of the more popular types of heather plants include:

Heather is a pretty flowering shrub in the Erica genus. The flower color ranges from white to pink and mauve. The plant’s foliage is mid-green but this will take on bronze and purple tones over winter. Flowering can start in mid-summer with multiple spikes of bell-shaped blooms.

Heathers are ideal for planting in sandy or rocky soils that are free-draining and acidic. It’s easier to grow compared to other flowering plants.