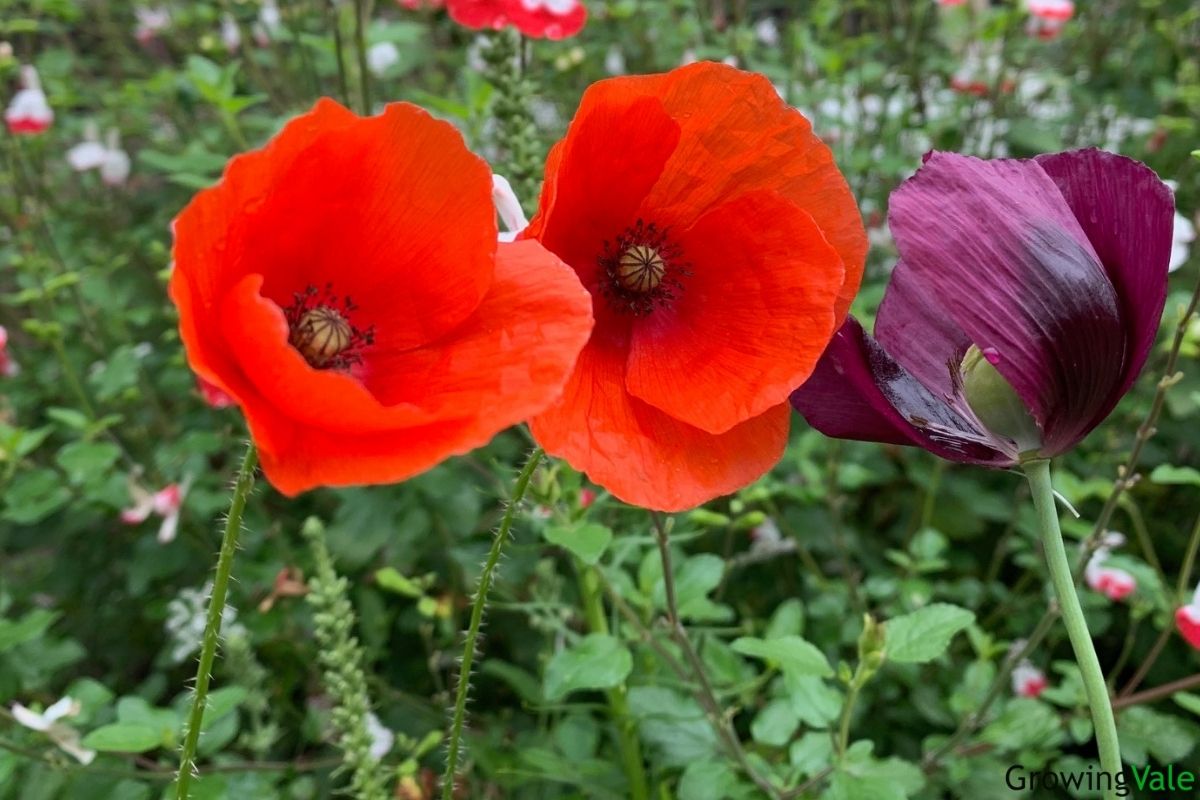 Papaveraceae, also known as the Poppy family, contains 44 genera and 825 species. The name “poppy” is given to any flowering plant in this family, but some of the most well-known poppies belong to the genus Papaver.

Other notable poppies include the California Poppy which belongs to the genus Eschscholzia and is native to the Western United States and northern Mexico. Most species from the Papaveraceae family are native to the Northern Hemisphere and are grown as annuals, biennials, or perennials, depending on the species and variety.

These iconic plants are recognized worldwide, and their striking and rather whimsical flowers are well suited to borders and beds in informal or cottage-style gardens.

Poppy flowers throughout history have had significance and meaning. In particular, the Field or Flanders Poppy is to this day rooted in symbolism. It has become a symbol for the bloodshed during the battles of World War I, where it blanketed the fields of former battlegrounds in Belgium, most notably in Flanders.

Since 1921, artificial poppies have been sold to support ex-servicemen and families of those who have been lost during conflict, with strong ties to Armistice Day (November 11th), when people wear paper poppies as a sign of remembrance.

These flowers come in a range of colors, from red, pink, white, purple, orange, yellow, and blue. Some species have petals that look like fragile crepe paper, some are multi-colored, and some have semi-double to double formed flowers. With such a wide range to choose from, finding the perfect species or variety to fit into your garden would be an easy task!

With such a large number of flowers inside the Papaveraceae family, this is a generalized growing guide for the more common and popular Poppy flowers.

Choose a sheltered area for planting, and take into consideration soil and sunlight needs. Prepare the planting area by thoroughly de-weeding as Poppies do not like competition.

When transplanting seedlings or root cuttings, dig a hole large enough to house roots comfortably and gently place new plants inside, paying extra care not to damage the roots. Cover with soil just below the lowest set of leaves, making sure they’re not touching the soil and water to settle in.

Poppies can successfully be grown in containers, but choosing the right kind of pot is important. Select a medium-sized, deep pot with good drainage. Position in a sheltered area and use a quality potting medium. Either sow seeds directly inside or transplant seedlings/root cuttings. Keep an eye on the soil to check it is never overly wet or dry.

How to Propagate Poppies

These plants are easily grown from seed and will also readily self-seed if permitted to. Some types such as the Oriental Poppy flower may not grow true from seed, but can also be propagated from root cuttings. However, in general, they prefer to be left inside the ground once established.

The most popular Papaver species can be grown from seed by directly seeding in the garden. Sow seeds in fall for a summer blooming the following year, and choose a day when the soil is dry.

Prepare the area by removing any weeds and use a rake to level the soil. Create shallow rows in the ground using hands or a hand trowel. Sow seeds carefully inside the rows, leaving ½ an inch space between them. Cover up seeds with a thin layer of soil and water gently. Over winter, the seedlings may need protection from frost using a horticultural fleece.

In warm climates, it is possible to directly sow E. californica varieties as above, minus the winter protection. Sow them in spring for a summer/fall blooming. However, in colder climates, the less hardy California Poppy and its varieties will need to be started indoors.

Sprinkle seeds over a tray of seeding mix then cover with a light layer of compost. Water well then cover with a plastic bag or lid. Keep the tray at 59°F, germination should occur within 14-21 days. After germination, remove the plastic cover and transfer seedlings into a cold frame or frost-free greenhouse. Place them in a cool, bright area, away from pests such as slugs.

After the last risk of frost, seedlings will be ready to be planted out in the garden or a container.

P. orientale needs to be dormant before propagation by root cuttings. Wait until either August or early spring before digging up roots. Using a sharp knife, take 4-6 inch root cuttings and place them within the moist rooting medium (½ perlite, ½ coir).

Place the container or tray in a shady area and keep the medium moist. When top growth begins, transplant cuttings into a larger container until new shoots grow and roots develop. Once the weather has warmed, plant them out into the garden. Plants will take approximately 2 years to flower.

Here are some poppy care tips:

The California Poppy flower in particular is tolerant of poor to average quality, sandy soil, as long as it is well-draining. Ensure soil is kept moist, not overly dry or overly wet, as many species such as P. rhoeas and P. somniferum are intolerable to extreme soil conditions.

After the establishment of transplanted plants, or when seedlings have emerged, water needs are relatively low at 1-inch per week. During dry spells or particularly hot days, give a little extra water, but take care not to over-saturate the soil.

They do not require feeding as they are relatively low-maintenance plants, and are even weeds in some areas of Europe! Perennials such as P. orientale will benefit from mulching over winter until they become firmly established.

These plants like to bask under the sun, so plant or sow seeds in areas that will receive full sunlight. In hot summer climates, the Field Poppy would benefit from some light afternoon shade.

Different species and varieties have different temperature needs. E. californica, for example, is hardy to USDA zones 6-10 but will behave as a short-lived perennial in zones 8-10. The Oriental Poppy plant, on the other hand, is a cold-weather annual (zones 3-7) that requires winter dormancy. Whereas The Field Poppy has a wide tolerance (zones 3-10) but generally prefers cool summer weather.

In general, Poppies don’t have any serious pest or disease problems, but they can get Botrytis and powdery mildew. Overwatering will also increase the risk of root rot. Just before blooming, Black Bean aphids may attack, use an insecticidal soap or strong hose pipe to dislodge them.

These plants readily self-seed from dried seed capsules that are produced after flowering. To control plant numbers, it is recommended to deadhead flowers. Some species such as P. orientale may not grow true from seed, so it’s important to keep that in mind when deciding whether or not to let plants self-seed freely.

P. orientale will also become yellow and die back after flowering. But there is no need to prune, as it will just leave a hole in the garden bed. Consider growing them near plants that will expand over late summer to cover the void. They may also need support while growing.

All Poppies contain extremely toxic alkaloids, which if ingested can cause convulsions, asphyxiation, and in extreme cases death. Toxic to both animals and people, no part of this plant should be eaten.

Poppies are extremely popular garden plants, especially in cottage-style or wildflower gardens. They produce lots of pollen, so are very attractive to bees and good choices for pollinator gardens too!

P. somniferum, a Poppy native to Turkey, is a plant with many uses. Its seeds are the classic Poppy seeds we see on top of bread and used for bird feed. This plant has medicinal uses too, the milky latex which comes from its unripe seed capsule is used for the production of pain medications, codeine, and morphine. However, also known as the Opium Poppy its milky sap is also used for the production of opium and heroin.

Here is a selection of some of the most popular types of poppies and firm garden favorites:

The name Poppy belongs to any flowering plant in the family Papaveraceae. The family contains 44 genera, of which, the Papaver genus contains the most popular Poppy flowers.

Poppies are rooted in symbolism with the Flanders Poppy having particular significance for Armistice Day and World War I. They have many uses aside from being beautiful ornamentals. Pain relief medicines codeine and morphine, and the drugs heroin and opium are derived from the milky sap of P. somniferum. This plant also produces the Poppy seeds we enjoy on bread!

Poppies are low-maintenance and will readily self-seed in the right environment, the perfect choice for whimsical wildflower meadows or cottage-style gardens!