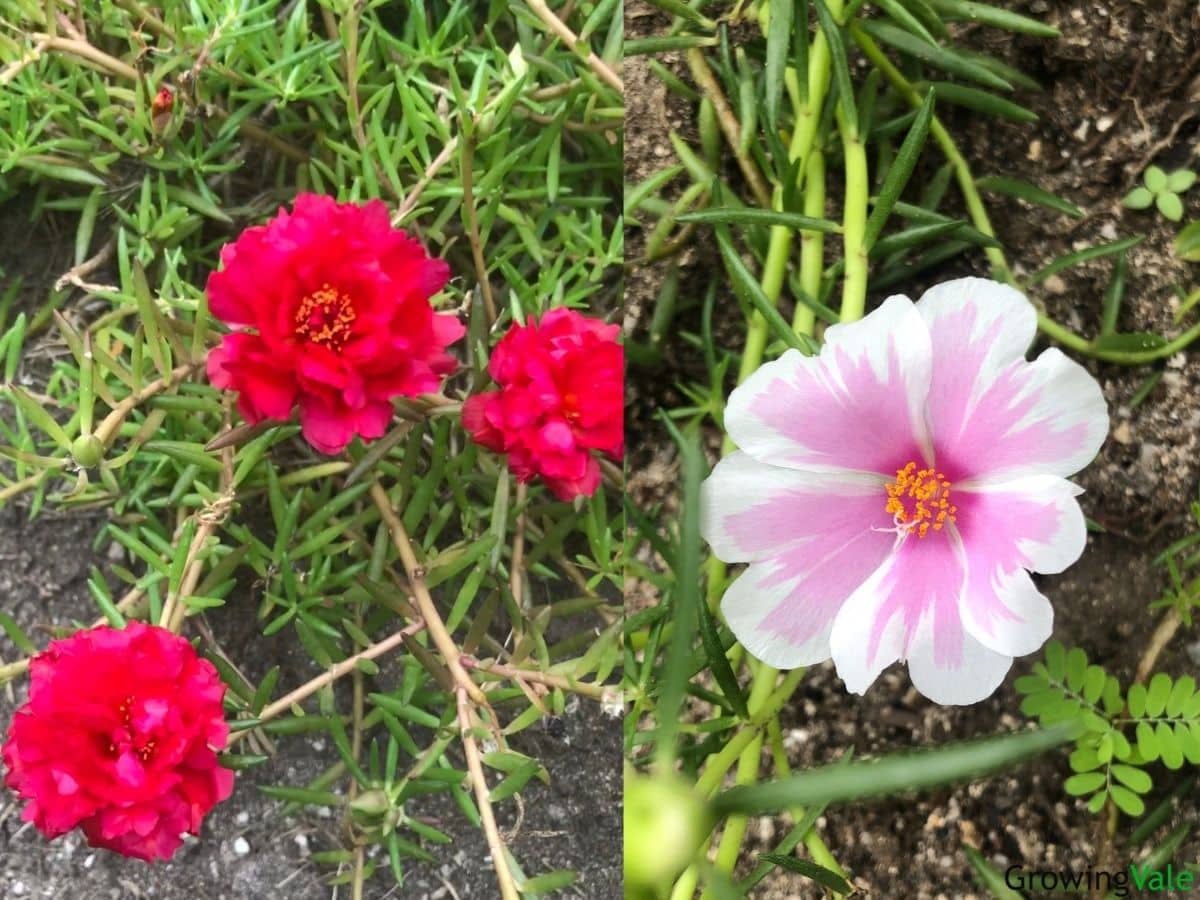 Purslane plants are the ultimate addition to any rock garden. These beautiful flowers come in vibrant colors and have a spreading habit, making them perfect for providing ground cover! They are short-lived perennial succulents, often grown as annuals in cooler climates.

Purslane belongs to the Portulaca genus of which there are approximately 40-100 species. Portulaca grandiflora (moss rose) is the most popular Portulaca species within the group and is a well-loved garden ornamental.

These delightful plants are prized for their ability to thrive and persist even in conditions that are less than ideal. They are drought and heat tolerant, can grow in poor soils, and can even bloom after they’ve been uprooted, as long as their stems retain enough moisture.

In addition to rock gardens, purslane flowers are fantastic for growing in containers and hanging baskets, for edging for pathways, or sprawling across stone walls!

Different species of purslane plants are native to different areas of the world, however, many types such as P. grandiflora and P. oleracea have successfully escaped cultivation and become widely distributed, often being found growing on roadsides, in cultivated fields, and other areas with poor soils! It is thought that Portulaca oleracea or common purslane reached North America in pre-Columbian times and was first introduced into Europe in the late 1500s.

The genus name Portulaca is the Latin name for common purslane, which is native to Western Asia and the Mediterranean and has been cultivated for over 4000 years as a food crop and its medicinal value. Its distribution is so widespread and longstanding that it goes by many other common names, including “verdolaga” in Mexico and “pourpier” in France.

There are many varieties of Portulaca flowers including beautiful cultivars and hybrids. They can have cylindrical leaves with pointed tips or flat leaves. Their flowers bloom from summer through to fall or the first frost, opening in the morning and closing overnight. During cloudy days they may even remain closed. Purslane plants are prolific bloomers, forming thick, dense mats of foliage studded with bright jewels of color!

These succulents have wonderful flowers that come in pretty shades of white, pink, red, orange, yellow or are bi-colored. Purslane flowers can be open saucer, cup-shaped, or rose-like, with single, semi-double, and fully double types!

How to Plant and Grow Moss Rose

Purslane plants are easy to grow, and once they’re established require little care. They can be purchased as pre-started plants from nurseries or grown at home from seeds or stem-cuttings!

When growing moss rose flowers in beds, it is important to make sure that any seedlings started indoors have been hardened off before transplanting them outside. Once the threat of frost has passed, prepare the site by de-weeding the area, breaking up the soil using a hand trowel or rake, and removing any large stones or hard clumps of dirt.

Carefully remove the plant from its container taking care not to disturb the roots too much, as purslane plants and seedlings are a bit fussy when it comes to transplantation. Make a hole large enough to comfortably accommodate the roots and place the plant inside at the same depth it was previously growing in its container. Fill in the hole with soil and gently firm the soil down around the plant. Water well to settle it in. Space the plants at least 12 inches apart.

Purslane plants are fantastic for growing in pots and hanging baskets. They are a wonderful addition to patio and city gardens, and are drought tolerant for those who occasionally forget to water their container plants! These plants combine well with other garden ornamentals. Consider planting them alongside colorful zinnias or nasturtiums for pretty container displays.

First, choose a suitable container, a large terracotta pot with plenty of drainage holes is ideal, or a hanging basket that has good drainage. This is very important as purslanes can suffer from crown, stem, and root rot in poorly drained soils!

Secondly, fill the pot up with a well-draining potting mix and either sow the Portulaca seeds directly following the instructions below or transplant the seedlings using the same method outlined above. Leave a gap of at least 1 inch between the top of the soil and the rim of the container to provide ample space for any water to soak in.

How to Propagate Purslane

Purslane plants can easily be grown from seeds or stem cuttings. Either sow the moss rose seeds directly outdoors in the garden bed after the last frost or to get an earlier bloom, start the seeds indoors 4-8 weeks before the last frost and transplant them out once the threat of frost has passed.

When sowing purslane plants outdoors, choose a suitable area in a sunny part of the garden, making sure the soil temperature is at least 65°F. Prepare the area by removing any weeds and turning up the soil with a rake or hand trowel. Purslane seeds are very small, so mixing them in with a little dry sand can help in scattering them out more uniformly.

Give them a very light covering of soil on top, as these seeds need light for germination, then give them a light sprinkling of water using a watering can fitted with a rose sprinkler head. Expect the seeds to germinate within 10-14 days. Once the seedlings have grown their first true set of leaves, thin them out leaving 3 inches or more of space between them.

Water them regularly during the growing season, but allow the soil to dry out thoroughly between waterings.

To get a head start on the blooming season, it is possible to start purslane seeds indoors 4-8 weeks before the last frost. To do this, use either a seed tray or modules, fill them with a moist well-draining seed mix, and scatter the tiny seeds on top. Similarly to sowing outdoors, it may be useful to mix the seeds in with 3 parts of dry sand to get an even spread.

Just barely cover the seeds with a light sprinkling of soil and place the tray either on a bright sunny windowsill with a consistent temperature between 65 and 85°F or on a heating mat with a temperature between 70 and 85°F. Keep the soil moist but not overly wet and expect germination within 10-14 days.

Once they have germinated, if using a heating mat, reduce the temperature down to 60°F. When the seedlings have two true sets of leaves, prick them out of the tray and pot them up individually. Take care not to disturb their roots too much!

Once the risk of frost has passed, begin the process of hardening them off for 10-14 days before planting them outside. Slowly introduce them outdoors by putting them in a shady spot for a few hours each day, gradually increasing it to the whole day. Towards the end of the hardening off period, leave them out overnight. After this, they will be ready to be transplanted outdoors.

If growing purslane indoors, or in a warm climate where they can be grown as perennials, they can easily be propagated from tip cuttings. Take 3-4 inch tip cuttings, removing all but the uppermost leaves. Purslane roots easily so no rooting hormone is needed. Put the cuttings in a tray filled with a moist rooting medium such as a well-draining, sterile potting mix.

Place the tray in a warm sunny spot at a temperature of around 68°F under bright fluorescent lights or on a sunny window. Keep the potting medium moist but not overly wet! They should be rooted within 17-21 days and ready for transplanting outdoors if desired. Make sure to harden them off before planting them outside.

Here are some moss rose care and maintenance tips to keep your plants happy:

Plant purslane in well-draining, sandy or rocky soils types. They can, however, grow in loamy or clay soil as long as it is well-draining. Although these portulacas tolerate poor soils, they will perform best when grown in rich soils with adequate moisture.

Purslane plants are drought tolerant but will need frequent watering throughout the growing season. Allow the soil to completely dry out in between waterings. Do not let purslane sit in overly wet conditions as they can get crown and root rot.

Purslane does not need fertilizing.

Portulaca plants love full sun and should be planted in an area that receives at least 6 hours of direct sunlight a day.

Purslane flowers are known to be high heat tolerant. They can be grown in USDA zones 2-11, but in cooler regions, they will need to be grown as annuals.

Generally, purslane is trouble-free, however, some potential pests include aphids, snails, and slugs. They are also prone to root, stem, and crown rot in poorly drained soils.

These lovely plants don’t require pruning, but they can be pruned mid-season to prevent them from looking scraggly and to encourage fuller growth. Deadheading or pinching can promote more flowering and will limit any self-seeding.

Common purslane, in particular, is mildly toxic to pets and livestock. Symptoms are tremors, salivation, and more rarely kidney failure in cats and dogs.

Moss rose flower is a great choice for a rock garden, or for growing in containers and hanging baskets or as bedding plants along with other flowering plants! Their brightly colored flowers make them ideal for bringing color into the patio, balcony, or window box, and they look simply stunning when planted en masse along the edge of pathways.

Common purslane, P. oleracea has many uses. It is sometimes used as fodder for livestock and for reducing egg cholesterol in poultry. It has medicinal value and has traditionally been used as an ointment for burns.

Common purslane is also edible and considered quite nutritious, and is commonly eaten fresh or cooked in many areas outside of North America. However, they can occasionally be found in U.S. farmer’s markets!

Many delightful purslane species, varieties, and cultivars exist! Here are some of the most popular Portulaca varieties:

Purslane is a group of 40-100 species within the genus Portulaca. They are short-lived perennial succulents often grown as annuals in colder regions. These wonderful low growing plants are heat and drought-tolerant, making them a perfect candidate for rock gardens or low-maintenance container gardens.

They have a mat-forming, spreading habit, so are a great choice for adding ground cover, edging pathways, or filling the gaps in the garden bed! Portulaca grandiflora or moss rose is the most popular in the genus and a well-loved garden ornamental.

Ornamental purslane flowers have been highly cultivated, with many beautiful cultivars and hybrids. Their flowers come in white, pink, red, yellow, and orange, but they can also be bi-colored! They also come in various forms, such as rose-like, cup-shaped, and open saucer, with single, semi-double, and fully double varieties!