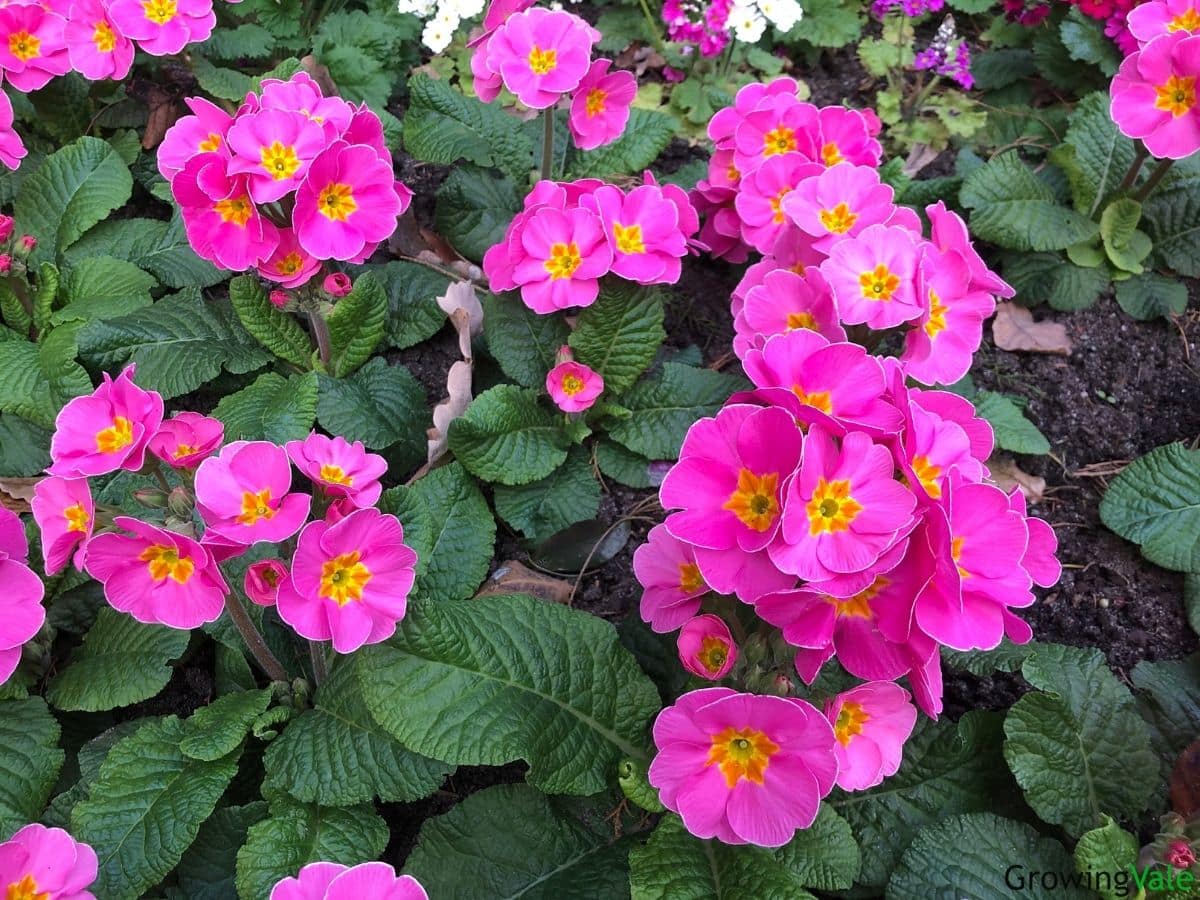 Primroses are wonderful additions to the spring garden. They are firm favorites of gardeners living in cool or temperate climates, and, with their brightly colored flowers, it’s easy to see why! The common name primrose is given to any of the flowering plants in the genus Primula and the family Primulaceae. There are approximately 490 – 600 species in the genus, most of which are herbaceous perennials, although some are biennials.

Several primrose species have been highly cultivated for their showy flowers, with hybrid species and cultivars making up the bulk of plants found in garden centers and nurseries. They are popular as potted plants, for rock gardens, or grown along shady garden borders! Their vivid flowers make them a top choice for brightening up balconies, courtyards, and patio gardens.

The majority of primroses can be found growing in cool or mountainous regions within the Northern Hemisphere. Plants belonging to the Primula genus have varying habitats, occurring in bogs, meadows, woodlands, and mountain slopes. One of the most popular varieties is polyanthus primroses, which are naturally occurring hybrids of Primula vulgaris and Primula veris. Sometimes referred to as P. x polyantha, these hybrids have been cultivated for centuries, leading to numerous delightful colors!

The genus name Primula comes from the feminine diminutive of the Latin word “primus” which means “the first”. This refers to the bloom time of most primroses which is in early spring. Primroses are said to represent eternal love, and in Irish Folklore, having common primroses (P. vulgaris) in your doorway keeps your home safe from fairies!

Primrose flowers come in many delightful and vivid shades. From white, pink, red, purple, yellow, orange, blue, and even black! Many varieties have a contrasting central eye, and multi-colored cultivars also exist. Their flowers may be solitary, grow in loose umbels, or less commonly, have rounded flower heads.

How to Plant and Grow Primroses

In the right climate, primroses are easy to grow in both beds and containers. They are short-lived perennials, often grown as annuals in areas that experience hot, dry summers, or extremely cold winters. They are extremely tolerant of transplantation.

Primroses are easily purchased in nurseries, garden centers, and even some supermarkets! Otherwise, they can be propagated at home from seeds, cuttings, or division.

Plant the primroses in September while conditions are cool but the soil temperature is still warm. Alternatively, they can be planted in spring. The first step to growing primroses in outdoor beds is to prepare the area. Remove any weeds and turn up the soil, removing any large rocks or lumps of hard dirt in the process.

Make a hole as deep and as wide as the roots, then gently tease out the primrose plant from its existing container. Plant them so their crown is at the soil level. Fill in the soil and firm it down around the plant, then water it well to settle the soil. Plant them at least 6 inches apart from one another.

Primroses are extremely popular as container plants! Plant several primrose varieties inside the same pot for a colorful display, or pair them with pansies, violas, or calendulas!

Choose a suitable container, large plastic or glazed ceramic pots are ideal. Avoid unglazed pots as these will wick away moisture causing the soil to dry out too quickly. Ensure the pot has sufficient drainage otherwise the soils will become cold and water-logged, causing root rot.

Fill the pot with a well-draining potting mix and follow the instructions above for planting. Leave a 1-inch gap between the top of the container and the soil to allow water enough room to soak in. If potting up primrose plants in September for a winter display, they can be planted closer together as they won’t grow much over the winter.

How to Propagate Primroses

Propagate primroses from seeds, cuttings, or by division.

Primrose seeds should be sown anytime between November and early February. They can be sown directly outdoors. First, choose a spot with suitable conditions. Prepare the site by thoroughly de-weeding the area and loosening up the soil, getting rid of any large stones or clumps of dirt in the process.

Scatter the seeds on top, making sure to spread them thinly and evenly. Then give them a light sprinkling of soil on top and water them with a watering can fitted with a rose sprinkler head. This stops the soil from being dislodged. Alternatively, the seeds can be sown in pre-moistened shallow drills and given a light sprinkling of soil on top, followed by a gentle watering.

To sow seeds in a container or tray, fill them with seed compost, scatter the seeds on top, and then give them a light sprinkling of soil, and a gentle watering with the rose-fitted watering can.

Once the seeds have developed their first pair of true leaves, thin them out to prevent overcrowding.

Primroses can be propagated from basal root cuttings in spring. In April, they should have strong new shoots which are ideal for taking cuttings. Choose a plant with strong new growth and take a 3-4-inch cutting as close to the base as possible making a clean cut. Remove the bottom-most leaves.

Fill a pot with a seeding mix and use a dibbler (or a chopstick) to make a neat hole in the soil around 1-inch deep. Cuttings will root better if they are near the edge of the pot, so make any holes around the edge of the container. Put the cuttings in the soil, cut side down, and fill in any gaps. Cover the container with a plastic bag and keep the soil moist but not overly wet.

The best time to propagate primroses through division is in summer through to fall, but newly bought plants can also be divided. Division is best done on a cool, moist day. First, lift the plant gently from the ground or tease it out of its container. Carefully tease the clumps apart, and discard the center which is now the least productive part.

Trim the roots to 4 inches long to encourage new feeding roots to be produced. Replant the new clumps into the ground or containers following the planting guidelines above.

Here are some primrose care tips:

Keep the soil moist but not overly wet, watering them thoroughly once a week, increasing watering during dry spells. Container-grown plants may need to be watered more often.

Fertilize primrose plants in early spring with a balanced fertilizer (10-10-10) following package instructions. If growing double varieties, which are heavy feeders, fertilize them with liquid fertilizer after flowering.

These plants prefer to be grown in dappled sunlight to full shade. They are intolerable of full sun conditions in the heat of summer.

They are susceptible to gray mold and root rot in overly wet conditions. In some species, the virus, primula brown core, can also be a problem.

Some species such as P. japonica should be cut back after flowering. Otherwise, no pruning is needed.

Some species of primrose such as P. vulgaris can be mildly toxic to pets such as cats, dogs, and horses, resulting in mild vomiting if consumed.

Primrose flowers are hugely popular for adding some color into gardens over the colder months. They work well planted en masse and can often be spotted planted in large groups in city parks. Aside from being popular garden ornamentals, some species also have medicinal value and can be edible!

P. vulgaris, or the common primrose flower, has historically been used for treating medical ailments such as paralysis, rheumatic pains, muscle cramps, and spasms. It is also used in salads as both their flowers and leaves are edible, with some people comparing their flavor to bitter lettuce! Young common primrose flowers are also made into wine.

There are so many wonderful varieties and types of primrose plants to choose from, it can seem impossible to pick! To help narrow things down, here are a few of the most popular varieties and cultivars:

If you love flowers, don’t hesitate to plant more species of flowers.

Primroses belong to the genus Primula and the family Primulaceae. There are between 490 – 600 species in the group, which is made up of mostly herbaceous perennials. The common name “primrose” is given to any of the flowering plants within the genus, several of which are highly coveted garden ornamentals! Primroses are firm favorites among gardeners for bringing color into the winter and spring garden, as these plants tend to thrive in cooler climates.

They can be found in the wild, growing in cool regions of mountains in the Northern Hemisphere, in habitats that range from bogs to meadows, to woodland. Some of the most popular varieties are the polyanthus primroses, which are naturally occurring hybrids of P. veris and P. vulgaris; they are occasionally referred to as P. x polyantha. These hybrids have been cultivated by people for centuries, and today, many attractive colors and color combinations exist!

Aside from their value as garden ornamentals, primroses also have medicinal value, and some species such as P. vulgaris are enjoyed in salads or made into wine! P. vulgaris is also used for treating medical ailments like paralysis, muscle cramps and spasms, and rheumatic pains!

Primroses are wonderful as container plants, planted along beds and borders, or for underplanting shrubs. They are a top choice for bringing a splash of color to balconies and patios!