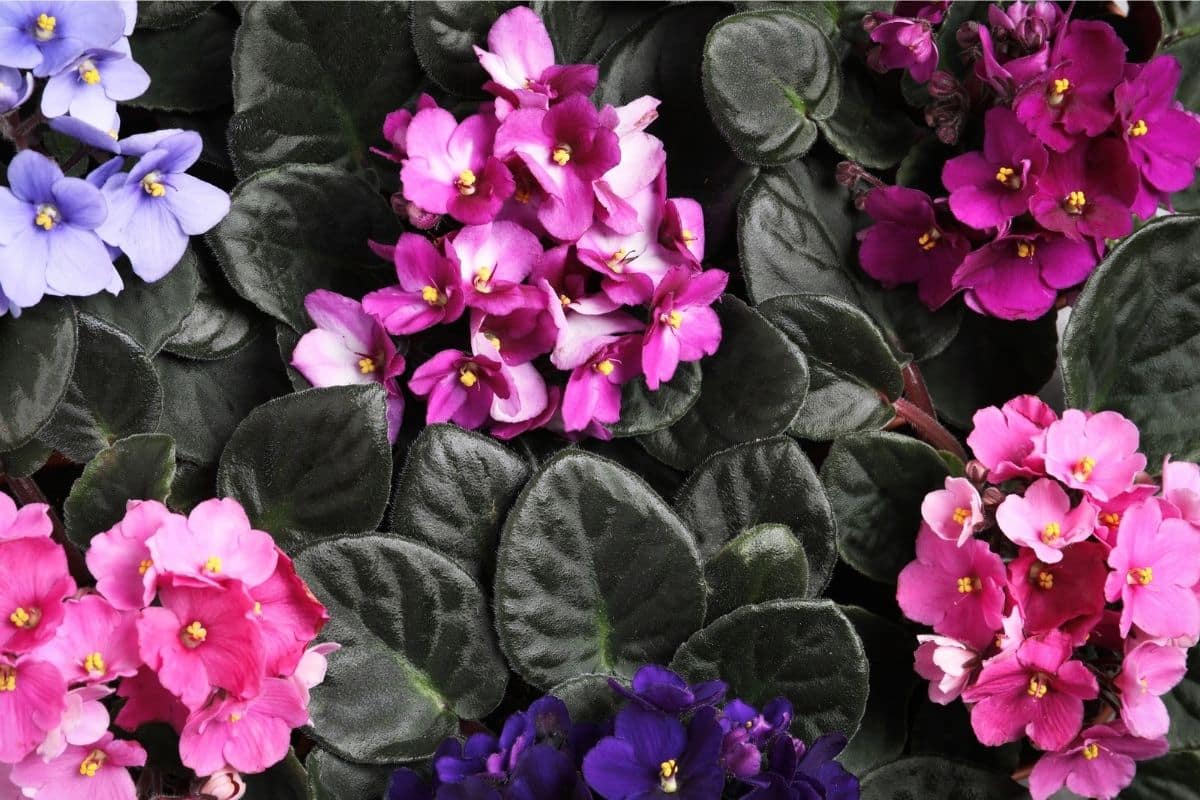 African violets are considered one of the most successful horticultural plants since this group’s discovery in the late 19th century. Producing hybrids is quite an adventure even when using only simple propagation techniques. These plants are easily head turners in green spaces and garden interiors, and their charms are lasting, indeed!

Ten natural species can be found in the wild from which all of the others were hybridized. A lot of the cultivars in the market were from hybridization in the lab to ensure the traits for successful blooming and while studying the ideal growth conditions fit for each.

This popular ornamental mostly varies in the floral colors, banding patterns, and types, and the leaf margins, colors, textures, and shades of green. It is also important for enthusiasts to note the growth habit since this can affect the space and maintenance of these plants, and these can range to the miniature, semi-miniature, standard, and large varieties. They can also grow as trailing or rosette types.

Beautiful Varieties of African Violets for a Diverse Collection

This variety has velvet glossy, dark to medium-dark green leaves accented with blue-violet, star-shaped single blooms that have pink colorations called fantasy streaks. It’s one of the types that have excellent flowering performance, and several gardening websites feature this plant due to its classic beauty and popularity.

This vintage variegated type is pretty hard to come by, but it’s a classic and exudes the beauty of white and cream in African violets. Most modern ones have this mother plant to thank for, and in the flesh, this variety has its charm with variegated, serrated leaves and white flowers that may have faint hints of pink to purple on the inner regions of the petals. The variegations in most of these kinds can be lost in the summer heat, but the Tommie Lou would stand the extreme climate.

Modesty and Romance, a patented variety from Optimara’s Victorian charm series, are well-known modern variegated types with white leaf margins, and some streaks can radiate to the center, while some leaves can have a full white or cream coverage, called crown variegation.

Modesty has petal colors of its single flowers in a deeper shade of bluish-purple to blue. Romance would have a pink shade similar to begonias.

This variety may have gotten its trailing genes from a native species of hanging African violets found on rocky slopes of the Tanzanian mountains. It deserves a spotlight because, among those trailers, this variety has a soft white and pink gradient coloration in the petals, and they can hold and bloom well despite the downward trail for that elegant corner piece!

To get the best of both worlds, Rob’s Boolaroo is a trailing variety that showcases ‘blue fantasy’ – that is, streaks of blue or blue-violet over light pink flowers. Arrange them in small pots or cultivate them into a thriving floral display, there’s no fail.

The soft pink, ruffled flowers of this variety have white textured edges around the petal borders, and this combination of banding and color makes it look like a dreamy bunch! This is truly a popular choice of growers. It has medium green leaves that are mildly frilled and so this allows the flowers to pop out!

A red, standard African violet superstar, the Red Rocket is one of the best growing varieties out there. It has white petal borders that highlight the bright red, star-shaped, fringed flowers. They showcase glossy, dark to medium-dark green leaves.

Red blossoms would speak volumes among the green, won’t they? Well, space-saving miniatures can also do the transformation, like this popular Optimara variety, ‘Little Maya’. They have single to semi-double flowers showcasing a dark to semi-dark crimson red, on top of medium green, felted leaves.

Plenty of African violets produce flowers in proximity to each other, usually on the top nodes and adjacently so they can easily be formed into bunches, and yet ‘Psychedelic Show’ ups the game with chimera flowers like it was dipped a bouquet into pink, purple and white paints at varying angles looking like a pinwheel.

Yellow blooms in African violets rarely come out pure, as this color is a latter expression from careful hybridization techniques. Although there are earlier varieties that have shown faint yellow colorations arising from the white, green, and cream tones, the Irish flirt is one of those varieties that have expressed a yellow color, of course in a two-tone combination with green, having a white rose allure.

As a popular trade among collectors, the standard-sized Pow Wow has a remarkable flush of deep red-violet to red pansy-shaped flowers, with leaves that are ovate, fuzzy, and crown-variegated. It is grown in a lot of states, and even in its younger phase, it would already bloom stunningly.

Another table piece favorite, the Persian Prince may seem like a powdery multicolored flower in bright spaces, but it is rather a two-toned lavender to blue-violet bloom up close. The medium green leaves can also be scalloped, referred to as a girl leaf, as the body grows up to a semi-miniature size.

Bright pinks haven’t gotten enough attention in this list, and yet this eye-catching trailer will surely make up for that! The powdery, lighter variegations on the medium to darker shades of green on the leaves are doing wonders, adorned by tiny, bright candy pink blossoms that poke all over. Such a tease!

Decorated with star-shaped, white flowers having green edges and at time lavender tinges, ‘Frozen in Time’ is simply a stand-out from all the “icy”-patterned, standard cultivars! It’s in tandem with light green leaves that are thinly variegated on the margins, and that will surely add brightness to any room! At some growing conditions, their foliage can also strut a deep, dark green or a dull-medium, and yet equally a delight, either way!

Such a pair shouldn’t be apart! A match made in heaven, the purple petals of Summer Twilight are lined with white edges, while the Lonestar Twilight has white flowers lined with purple. Their ruffled blooms are a feast on the sight, so each will stand out without the other!

This semi-miniature is perfect simply because both the floral and foliage parts glow pinks! The crown-type of variegation in the ovate, medium green leaf regions are in white, cream, and pink, and the pink flowers are double types in pansy shape. It screams of personality if not somebody accidentally sprayed a pinkish tint on a garden plot.

A collection shouldn’t go without the native types, especially if you are that much interested in plant breeding. Now under the name S. ionanthus subspecies velutinus, it is widely called ‘Amazon’ and its distinct trait is a sticking out upward of the flower blooms. It is among the miniatures, and probably mothering the others, as well.

There hasn’t been enough emphasis on the fantasy lines, so the ‘King’s Ransom’ is one to represent. It is a double to semi-double pink flower with two borders, a layer of white and of a purple or a darker pink that is the fantasy streaks, as some dots radiate inwards.

The King’s Treasure is less on the streaks and more on the showcase of the said layers, if not of a light purple-blue-white towards the edge, so that at first glance, the ‘King’s Ransom’ would appear to be a dominant pink, while the ‘King’s Treasure’ is more of a purplish-blue palette.

The mosaic glamour cannot be left ignored. With red blossoms sticking upright from the rosette, the leaves also demonstrate an excellent mosaic pattern of whites without overpowering the dark greens filling what’s left of the edges.  This one’s featured also for its good record in blooming performance.

The wistful ‘Ruffled Skies’ shows intricate ruffles on its two-toned, powdery deep blue to lavender petals. It has a spin-off, Ruffled Sky 2, which contains yellow-green edges outlining the fringes. The leaves are medium green with a red back.

This one is difficult to find even in online shops, but ‘Easter Bunny’ is what the forums are raving for, with its pale pink corolla outlined by darker pink if not purple hues. The effect is a minimalist, pristine charm. It’s an easy grower with bold blush hues so, it seems to be a collection staple!

The Russian-bred LE-Julia is one of the dreamiest and it’s quite rare to find their pictures anywhere. Russian hybrids of saintpaulias are typical of fringes in the corolla, although this variant stands out due to its supple lavender outlines over the white floral blades. The leaves are also curled, following the aesthetic.

Bell-shaped corollas are also observed in the variants. To add to the ringing elegance, Pewter Bells’ faintly variegated edges on dark green, ovate leaf blades can make a minimalist arrangement. The stalks to the flowers are upright and long, and still, the bells droop slightly to a fancy, as they should be. This is one of the well-known types.

Yes, the wasp types can look more like begonias from afar, if not orchids. Both the Blue Tail Fly and Royal Wasp are still emanating that grand color signature of their kind. The wasp-shaped corolla ranges from blue to bluish-purple, and the dark green blades are ovate and velvety for the Blue Tail Fly, while they tend to be wider and larger for the Royal Wasp so that they seem to be flying above a green throne.  The Blue Tail Fly tends to trail while growing, in contrast to the other.

This miniature is the last but not the least! Bids skyrocket for this magnificent coloration, as one of the few chimeras on this catalog, but when it comes to the charisma of this white-petaled blossom adorned with blue streaks on the side of each petal, this miniature will unquestionably make any space posh.

Up next: How to care for African violets