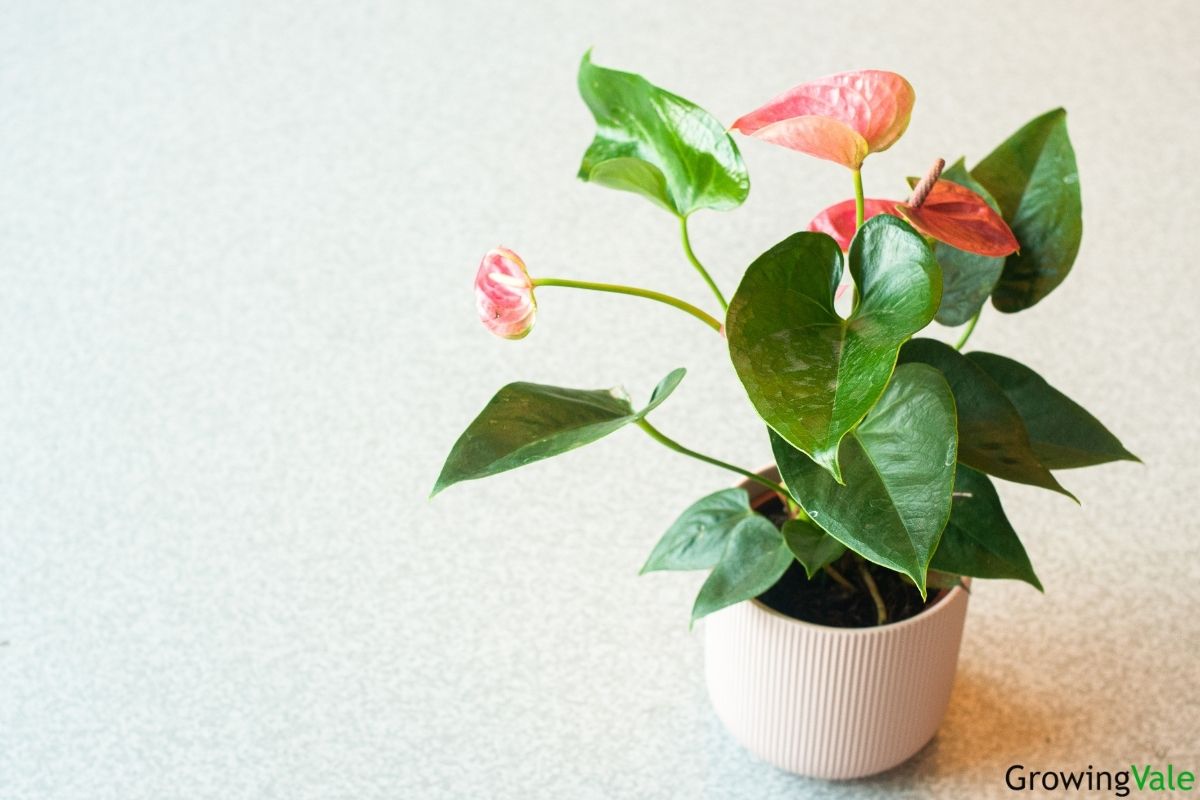 Anthuriums are one of the most popular perennial ornamentals out there today. They give off a plastic and semi-coriaceous vibe, and they last long as cut flowers on vases to accentuate household interiors and even professional spaces. With the availability of knowledge and exchange of information, indoor anthurium collections are gaining traction among enthusiasts.

Most robust varieties like some large, cardboard-leaf kinds are bred in greenhouses, so the types that become successful houseplants are celebrated. Some have aromatic traits and produce more flowers and leaves, so they are popular choices for interiors.

There are many species of anthuriums naturally growing in the Americas, but the most popular in cultivation, A. andraeanum Linden ex André, was introduced from the tropical rainforests of Colombia and nearby vicinities. It was first showcased as a commercially cut flower and the industry grew in various countries, most popular of which is in Hawaii.

As collections grew and new hybrids emerged, container trading of these arums eventually became more prevalent in the 1990s, with Florida taking the lead. Production practices like the management of light and fertilizer complement breeding techniques to influence leaf sizes and the amount of foliage.  Recent varieties achieve export quality since they are less vulnerable to transport and packaging damages.

The name anthurium came from anthos and oura, which mean ‘flower’ and ‘tail’ respectively since the inflorescence resembles tail-like flowers.

How to Plant and Grow Anthuriums

Aside from the successful micropropagation of hybrids from buds and shoot tips which results in higher yields, producing new plants from cuttings and seeds is fairly straightforward. Also, around every two years, when an aerial root starts to protrude from the soil, it is ready as planting material.

Stem cuttings of at least six inches with two to three sets of leaves are good. In the same principle, exposed aerial roots are cut and soaked in the rooting hormone. Cuttings can be directly potted after a quick dip at the rooting hormone or soaked for several days before potting. They grow shoots or roots after four to six weeks.

For rooting, a great potting mix would be 1:1:1 peat, perlite, and bark. Alternatives are mixes of vermiculite, wood shavings, fern slips, coffee parchment, sand, or premixed soils like an orchid medium. The soil pH level should be around 6.1. Beneath the pots, a tray of gavel maintained with moisture is helpful, too, if not a layer of potting shards at the bottom of the container.

The potting mix can be retained for vegetative growth until the next repotting. In general, anthuriums can tolerate a range of sandy to loamy soil profiles. Orchid medium mixed with perlite works well because it results in good-draining soil with sufficient water retention.

Despite the numerous species and varieties of anthuriums available worldwide, the basic principles of raising the members of the largest arum genus rely greatly on humidity and nutrition.

Maintaining soil moisture is very important for flamingo flowers, though they are also fairly drought tolerant for a few hours. A good habit is touching the topsoil for signs of dryness, so it must be watered again. Weekly misting will also keep humidity levels at bay, and more often so during dry winters and extreme summers. In greenhouses, drip irrigation works well.

This type of ornamental doesn’t require much fertilizer or additives, and artificial substances cannot be sprayed directly on the precious leaves and flowers, otherwise grey residues will appear. A fertilizer or liquid food high in phosphorus is diluted to half the regular dose and double the usual intervals.

These arums grow well in partial shade since they occur as understories in the natural forests. In addition, their roots rest shallowly in the ground, occasionally popping up as aerial roots and if these won’t be harvested as new planting materials, it’s better to keep covering them up with soil on top.

Their repulsion to direct sunlight doesn’t make them tolerant to low light and colder temperatures, either. Indoors, they will grow healthily in medium sunlight. There are no known varieties of anthuriums as winter interests, but controlled light and temperature indoors do wonders.

Pots tend to be rootbound in about two to three years for anthuriums, if not the stems and foliage become too crowded. Roots can also show from the drainage holes, or several leaves in the pot would seem wilted due to insufficient water uptake. In these cases, repotting is necessary, or else the plant eventually dies. Still, the size of pots matters as anthuriums prefer averagely tight spaces.

The plant body can be dug out of the pot, which will reveal the entangled ball of roots. One can either divide the plant to its roots by loosening the tangles, or make stem cuttings and trim the remaining network. The standard pot is about one to three inches larger in diameter than the planting material, and at the inner bottom of the pot, a mesh can be placed to avoid the overgrowth of roots.

Oftentimes, the accumulation of dust on the glossy leaf and spathe surfaces is easily detectable. Misting them along with gentle wiping of a soft cloth will maintain the fresh vibe of the plant and preserve the colors. Some varieties possess a spadix that is prone to releasing pollen, but if it is quite indistinct, the spadix can be removed to highlight the spathe.

If browning or discoloration occurs, resolving possible disease, nutrient deficiency or pest infestation is done first before pruning the leaf because the damaged area can serve as an indicator if such treatment is working. Overall, they do not need pruning for upkeep, unless cutting is intended for propagation.

This plant group thrives in tropical conditions, so outdoors they optimally grow in 70 to 90 degrees Fahrenheit, or at least just above 55. In transit, between 55 to 60 degrees F can prevent immediate wilting and damage. A humidifier is still a very efficient way to maintain humidity in enclosed areas. Also, anthuriums respond well to mildly acidic soils, about pH 6.1, to around a slightly alkaline one, around 7.8.

Anthuriums are also vulnerable to common houseplant pests like mealy bugs, molds, mites, and scales. Organically, it can be treated with natural oils and even diluted liquid soap. Symptoms include rotting of parts or leaf spots that aren’t variegations. If the damage isn’t too deep, brushing the parts with soapy water is an ample remedy.

The greatest threat is the Anthurium thrips, Chaetanaphothrips orchidii, attacking flower buds before they could fully develop. Weekly application of insecticide for up to eight weeks is the most recommended solution.

Be careful not to let the pot dry out, leading to blackening of leaves, or to retain too much water, indicated by yellowing of the leaves when waterlogged. Direct sunlight can scorch the foliage or cause poor coloration especially of the spathes. Insufficient humidity will cause leaves to lose shine and texture. Low light, like in winters, can cause less or poor flowering and more foliage.

Other things to consider

When a plant grows too dense, and roots crowd the topsoil, transferring the plant to a bigger pot or dividing it into new individuals is advised. To manage cut flowers, regular water replacement and cutting half an inch from the bottom of the stem before the stems become too tender can maintain their shelf life. For aesthetic purposes, three single cuttings on a pot can still grow well.

Here are some common types of anthurium you can grow:

Anthuriums already have a successful reputation as both a garden and house plant. Aside from its prevailing title in interiorscapes, anthuriums are proven to be efficient air filters, cleaning the immediate surroundings of formaldehyde, ammonia, and xylene pollutants, according to a NASA study. Hence, they are recommended to be placed every hundred square feet.

There’s no question as to why anthurium cultivars are still continuously increasing in value as a potted interior plant. Given the right information, these plants are the easy-care-with-great-return types.