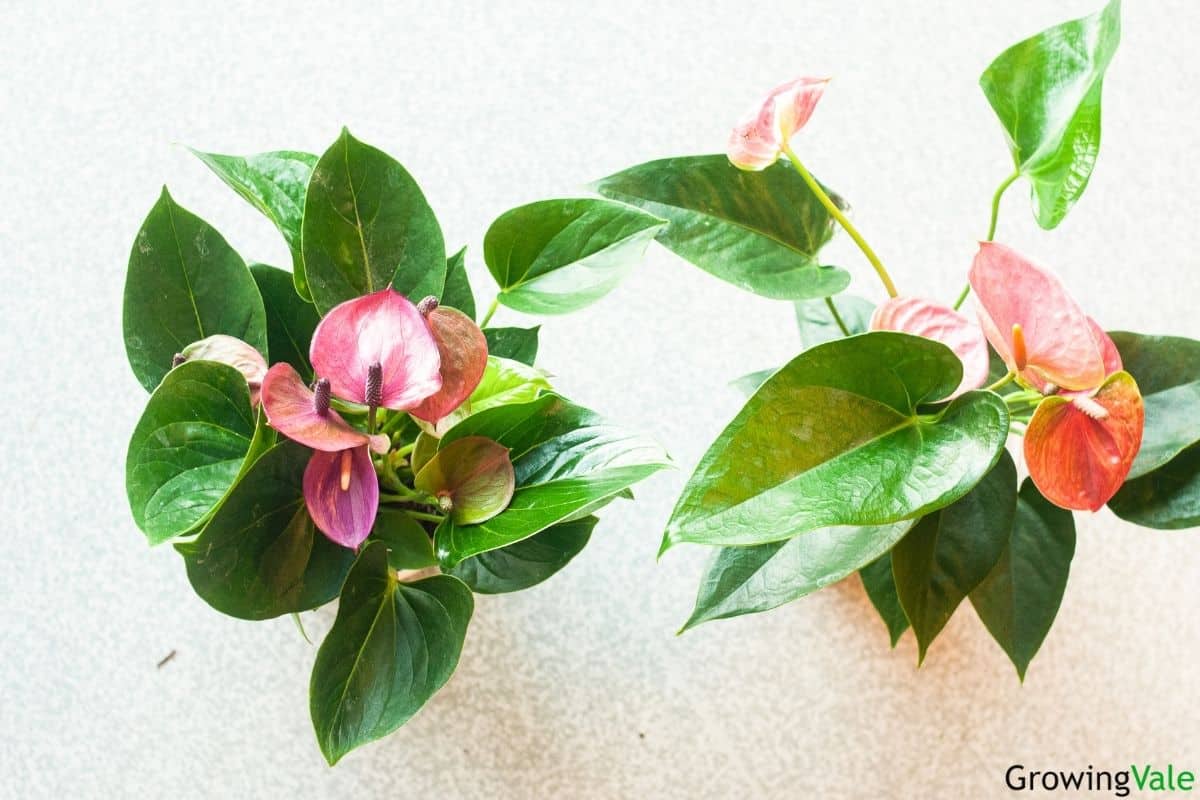 Anthuriums are remarkable for their elegant display of the spadix-with-a-spathe type of inflorescence, and yet their leaf variations can also steal the show. Anthuriums can vary based on sizes, leaf shapes, venations, sizes and colors, spadix hues as well as spathe features and textures.

A spadix looks different from a typical flower because it appears to be conical or tail-like, but it is actually a modified spike inflorescence with reduced, apetalous flowers borne on a succulent stem. Usually, this is enclosed by a single spathe, which is a specialized bract.

There are over a thousand of these species, possibly more if cultivars are counted. Indoors, they easily complement modern minimalist designs, but this group has been a popular ornamental for decades. There are several species and varieties that stand out among the rest.

A native of Ecuador and Colombia, this is the ‘anthurium’ being classically referred to and its cut flower lasts very long. It is also the one commonly hybridized. Within the species, there are several note-worthy varieties, which would have a more plastic-appearing spathe in the shades of pink, red, orange, white, and even a red tainted with green. Spadix can also be a solid color or a gradient.

It generally has a waxy, palette- or heart-shaped, bright-red, crinkled spathe that usually rests horizontally if not slanted downwards. Its glossy leaves are a darker shade of green, usually large, up to 30 cm. in length, and an oblong, arrow, or heart shape. The spadix is fleshy and grows straight or just slightly bent.

A. andraeanum and A. scherzerianum are the only scarlet spathe species in the whole genus, or those who loudly show the red color, and this one also comes in several varieties. This species is a native of Costa Rica and is the first to be discovered and referred to as the flamingo flower. It is also the first to spread in Europe, while A. andraeanum became more popular in Hawaii.

The obvious difference between the two is that a pig’s tail flower has a thinner, coiled spadix, on top of an ovoid spathe which can sometimes be skewed aside from the inward or outward curl. The spadix-spathe colors can match or contrast each other. The leaves are narrower and lance-shaped that tapers at the apex to a point.

This species native to Panama earned its popularity because of its narrow, lavender spathe, giving rise to cultivars with purple spathes in various intensities. Also, it has a fragrance described as sweet and minty, and its flowering performance is outstanding. Finally, the curving of the spathe notably resembles tulips.

It isn’t drought-tolerant since it is naturally found on rocks along rivers. It still makes a perfect indoor plant because of its true miniature size and height which doesn’t go beyond 6 to 8 inches. A. Amnicola paved the way for horticulture to put a spotlight on this group as houseplants since, before the early ‘70s, they were only produced for commercial cut flowers, a huge industry in Hawaii.

Despite very specific growth requirements, the Velvet Cardboard species is currently a rising indoor plant celebrity over social networking sites. Endemic to Chiapas, Mexico, this exotic, rare species flaunts its leaves with the well-defined venations appearing as thick white outlines over the deep green, ovate- to heart-shaped foliage that feels thick like velvet cardboard. The spadix and spathe are inconspicuous and grow at the tip of the stems but are better cut off to focus the foliage.

The Queen Anthurium is another exotic plant that features large, lance-shaped, dark-green velvet leaves outlines with silver-white veins that are way narrower and longer than those of similar types. They are placed in hanging baskets or high shelves while the large foliage is allowed to hang down. They appear in numerous forms, some wider, lighter, etc., often being mistaken as a new species, while the inflorescence is inconspicuously colored.

Matching the Queen’s attributes, this species has venations forming ridges to make the thick, lanced-shaped, glossy, leathery leaves appear like drapes, having a prominent midrib, although the shape dimensions and green shades vary with the room conditions. In the wild and tropics, they grow larger. In temperate areas, these types sit well in greenhouses, but for its elegance and pendulous size, it is another hanging houseplant worth the care and effort.

The Ace of Spades has dark, semi-coriaceous leaves contrasted by white venations with some slight glowing veins, so that the leaves appear to be sparkling. The spathe is usually green in most varieties, and the spadix is pale green or yellow. It is widely found in Colombia and Panama, although original records do not match current collections, a mystery!

The Black Anthurium has glossy, dark-green leaves that are ovate-triangular while its spathe is commonly dark purple, seemingly black, and spadix green to purple. It is a Colombian native, and also found in Costa Rica. A ‘black’ or very dark purple spathe in anthurium isn’t unique to this species, but A. watermaliense flowers well and is the most popular among the black inflorescence kinds.

It seems like there is truly a hype with cultivars that exhibit a bird’s nest or a bird’s feather. In the stores, though, hybrids looking like this species, especially those they cannot identify under a specific genus or species, is generally labeled A. hookeri, although the real deal is usually rare in the wild and would distinctly produce a white berry compared to its common look-alikes with red fruits.

Their leaves also possess characteristic small, black dots in their oblanceolate foliage, which is attached to a rather short petiole. The spadix would be bluish-purple, wrapped by a green, usually limp green spathe with a tinge of purple.

This strap-leafed Columbian native is still referred to by its scientific name, but it is set apart from the other pendulous types due to the combination of pendant-shaped leaves marked with yellow dots or smudges, and pink, dangling red inflorescence that grow purplish or pinkish berries. As a hanging plant, it is more versatile for design ideas, and it is the more readily available and affordable kind.

There are more unique hybrids, species, and varieties out there, while the ones in this list feature both the rare and the popular ones, some are prized and luxurious, while the others are unbelievably affordable! They may require varying growth conditions, but these were chosen due to their successful reputation as indoor anthuriums.

Up next: Anthurium Plant Care

Royal Botanic Gardens, Kew Board of Trustees. 2017. Plants of the World Online.