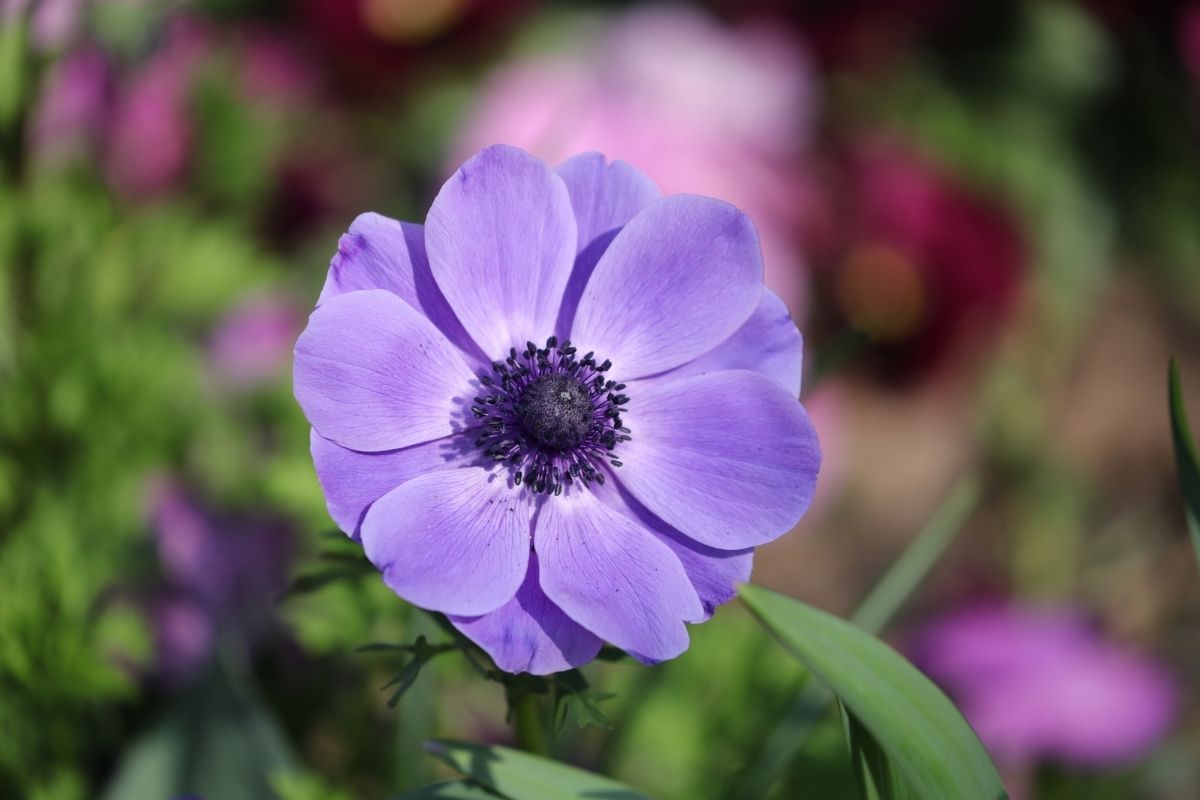 This kind of Anemone is not the sea creature you think it is. Now you must be wondering, isn’t this the same Anemone where the clownfish Nemo and Marlin live in from Disney Pixar’s Finding Nemo? Nope, it’s not! This Anemone is a dainty and delicate flower popular in gardens and homes. Behind these amazing flowers lies even more interesting meanings and symbols you have to know about!

The Anemone – or altogether called Anemones, were defined in 1545 as perennial plants with vibrant colored poppy-like flowers. It consists of divided leaves with its flowers composed of sepals and are native to the Northern temperate regions of the hemisphere.

The blossoms arise from the genus Anemone of the Ranunculaceae or buttercup family. The genus derives from Greek words ánem meaning wind and ōnē meaning feminine.

The Anemones are also called by other interesting names. Each of which has its own story to tell. Windflower and Pasque flower are two of the most popular other names the Anemones are known for.

The most distinct symbolism of Anemones is a hidden gem behind the names Windflower and Pasque flower! The Windflower is symbolic of the daughter of the wind because these blossoms only bloom whenever the wind blows. Besides this, the name depicts the fragility and delicacy of the flower.

The Pasque flower was bestowed by herbalist John Gerade to Anemones because he observed that the flowers bloomed during Passover time. During this time, these blooms were also symbolic of the time of Easter and are the inspiration for the brightly colored eggs during the egg hunt!

Windflowers send a meaning of abandonment and being forsaken. Sadly, it can also mean being taken for granted, sick, betrayed in love, neglected, and misplaced hope. These very heartbreaking meanings are inspired by a Roman myth and other folktales that you have to continue reading to find out!

What does a White Anemone Flower Mean?

White Windflowers convey the meaning of sincerity. It shows the true meaning of inner peace and tranquility.

What does a Red Anemone Blossom Symbolize?

Like all red flowers, the symbolism of a Pasque flower is no different. It is symbolic of an unfading bond of love. In the language of flowers, these also symbolize strength and security.

What does a Blue Anemone Floret Indicate?

What does a Purple Anemone Bloom Represent?

Just like royal motifs embellished in rich purple garlands and sashes, the same integrity is represented by purple Pasque blooms. One’s honor, stability, harmony, and balance are depicted by such flowers.

What does a Pink Anemone Flower Symbolize?

Pink has always been that one color symbolizing love and understanding. In the case of pink Windflowers, it symbolizes devoted compassion and sympathy or empathy.

What does a Yellow Anemone Blossom Mean?

Yellow Pasque flowers pop up in vast numbers during bloom time in Spring. The sight of such cute blossoms conveys daintiness and confidence.

What does an Orange Anemone Bloom Indicate?

Unmatched confidence and ephemeral wonders are indicated by the blooms of an orange Pasque flower.

What is the Cultural Significance of an Anemone Bloom?

Several cultures have popular beliefs about what the Windflowers represent or embody. Did you know that the Romans used these flowers as a sign of good luck and fortune? Surprisingly, they do! Although not all can be the same for other cultures.

The Persians have a different idea in mind when it comes to this bloom. They believe that the flower is a bringer of illness and bad luck. And not surprisingly, the Chinese also use these flowers as a dark symbol in funerals representing death.

What Folktales are Associated with an Anemone Flower?

According to old English tales, Europeans would hold their breath for as long as they could while running in a field of Wildflowers. Wondering why? Well, these folk believe that the flowers made the air poisonous and caused diseases when breathing the air around it!

In Roman mythology, the Windflower is quite a story to tell. Anemone was a divine nymph living in the court of Flora, the goddess of flowers, and her husband Zephyr, the west wind. Anemone and Zephyr were deeply in love, making Flora furious with jealousy. Banishing Anemone from her court, she was left to wither and perish. Zephyr pleaded with Venus to change her body into a flower. Sadly, once his wish was fulfilled he abandoned Anemone to the rude north wind, Boreas. By his strong winds, her flowers were forced open for all to see.

Did you know these were also called the Adonis flower? If you didn’t know about it yet, Greek mythology tells a tale about Adonis, a young and very handsome man. He was tragically killed by a wild boar which broke the goddess Aphrodite’s heart. It was believed that upon his blood and the goddess’ tears, a red crimson flower blossomed and was named the Adonis flower.

What is the Biblical Meaning Behind an Anemone Blossom?

Early devout Christians believe in the biblical importance of Pasque flowers. It was said that the flowers flourished throughout the Holy land and is an image of the Lilies mentioned in the New Testament.

Sadly though, the flowers are symbolic of sorrow and death in Pagan beliefs. More recent Christian beliefs associated these blooms with illness. The blossoms portrayed the death of Christ during His Crucifixion and the sorrow of Mary during such tragedy.

The flower’s three leaves are symbolic of the Holy Trinity while the red streaks on the sepals depict the blood of Christ.

What is the Spiritual Influence of an Anemone Floret?

The spiritual magic of Pasque flowers will help you work through your darkest fears and deepest sorrows. These blossoms will help guide you through the path of healing and self-discovery. It is a reminder that tomorrow is a new day where something special is awaiting you just around the corner.

What does an Anemone Floral Tattoo Symbolize?

Choosing a Windflower for a tattoo design will send a message of you as a risk-taker with a strong heart and confident mind. Embodying this tattoo portrays beauty and is a symbol of love.

The Pasque flowers are a garden favorite of many for the several bright colors it comes in. It is adored as a ground cover flowering plant, cut flower for vases, or a potted indoor plant. This plant also has traditional medical uses in different cultures.

During the early eras of Greek and Roman empires, the flowers were once used by magicians as charms tied around the arms and neck to treat diseases. It was also infused as a tea to cure and prevent fevers.

In the lands of Native American Indians, the Windflowers were made into a poultice for treating wounds, burns, and nosebleeds. The roots were infused into tea as a remedy for headaches and dizziness. A word of caution that it’s a must to always consult a medical professional before using this plant or any part of it for medical purposes.