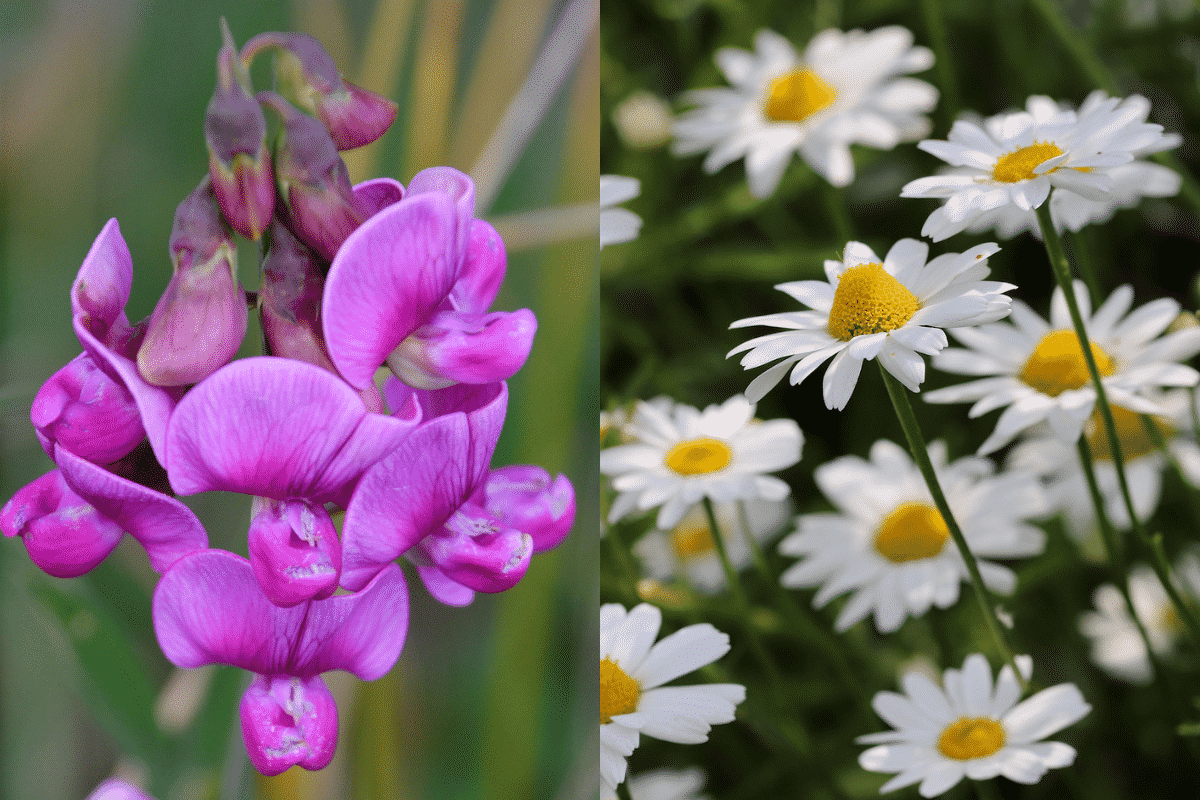 It’s often said that April comes in like a lion and goes out like a lamb, meaning that the first month of spring usually starts harshly but ends with more enjoyable weather.

This is when nature wakes from her cold, dormant slumber and begins to transform into a green, lush paradise. It is also during this time that daisies and sweet peas – the true markers of spring and the official birth flowers of April – blossom and dazzle the world.

Sometimes referred to as the common daisy, English daisies, bruisewort, woundwort, or lawn daisies, these bright and cheery April birth flowers are herbaceous perennials with enchanting white petals and a pink or yellow pistil.

The name daisy originates from the old English term “daes egge” which translates to the “day’s eye”. It was named as such because the blooms of this April flower of the month open at the start of the day and close at night. It is from this growth habit that the term “fresh as a daisy” originates as it suggests someone had a good night’s sleep.

Belonging to the Asteraceae family which includes Bellis perennis as well as many other types of daisies, daisies are native to Western Asia and central and Northern Europe. They are considered among the oldest cultivated flowers on earth with the first recorded cultivation taking place in 2,200 BC. These charming birth flowers first originated in open fields in England as wildflowers, but are now naturalized in temperate climates throughout the world.

During Egyptian times, daisies were used as an almost universal treatment for a range of diseases. The English later used daisies medicinally to cure eye problems and stomach ulcers. In modern times, bruisewort is still used to treat coughs, inflammation, and bronchitis. Wild daisies are also used to treat wounds or diseases of the skin.

Since the whole plant is edible, this lovely birth flower is also sometimes added to salads.

What does the Daisies symbolize?

Here’s what to know about daisy symbolism:

As a child, if you wanted to know if “he loves me or he loves me not”, then you were probably familiar with daisies because they were the flowers whose petals you would pick one by one until the last petal which told you how that special someone felt about you.

Whether or not this April birth flower can confirm true love, it does have a range of meanings dating back to Norse legend and the goddess of Freya. According to mythology, daisies were one of Freya’s sacred flowers. As the goddess of sex, fertility, and love, daisies became associated with her powers and now signify the new beginnings that come with childbirth and motherhood.

As birth is a fresh start in the world, daisies also represent innocence and purity. This April birthday flower also signifies transformation enabled by loyal love, devotion, and affection.

During Victorian times, daisies meant “I’ll never tell” and were given as a bond of secrecy between close friends. They were also a popular way to show affection and deep devotion to a mother or a wife.

Famous for its enchanting fragrance and butterfly-Esque blossoms, the April birth flower sweet pea (Lathyrus odoratus) is a climbing plant that comes in shades of pink, red, white, blue, and violet.

The name sweet pea (Lathyrus odoratus) comes from the Green word “Lathyrus” meaning pulse or pea and the Latin word “odoratus” which means aromatic or fragrant.

The origins of this birth flower are often debated – with some horticulturists asserting it comes from China and others concluding that it originates from the warm Mediterranean climate of Sicily, Italy. Some even believe this climbing annual with feathered leaves and flowing tendrils was brought to Italy from Peru or Ecuador.

Regardless of where this birth flower for April comes from, it is a modern favorite and has become widely cultivated since Victorian times thanks to Scotsman Henry Eckford who helped to introduce more than 250 varieties through his cross-breeding program.

Since that time, the sweet pea has become so beloved that English gardeners even nicknaming them the “Queen of the Annuals” because of its flowing tendrils, feathered leaves, and abundance of intoxicating blossoms.

What do Sweet Peas symbolize?

Here’s what to know about sweet pea symbolism:

With its blissful and vibrantly colored butterfly-shaped blossoms, this April flower is full of meaning – particularly gratitude and loyalty because they are such a wonderful gift to share with both friends and family. They are also a perfect way to tell someone you care about goodbye, with legend suggesting that Shakespeare had sweet peas in mind when he penned “Parting is such sweet sorrow”.

However, as an internationally loved flower, this spring charmer also symbolizes different things in different cultures and times throughout history. For example, during Victorian times, the sweet pea represented new beginnings, strength, and a means to reveal truths. This was following the introduction of this stunning April flower by Henry Eckford after his journey from southern Italy to bring back these soon-to-be namesake flowers.

Not too far away in France, sweet peas are not just seen as birthday flowers but also as good luck for brides on their wedding day.

Wherever you’re enjoying these delightful April birthday flowers, they are sure to be well-received!