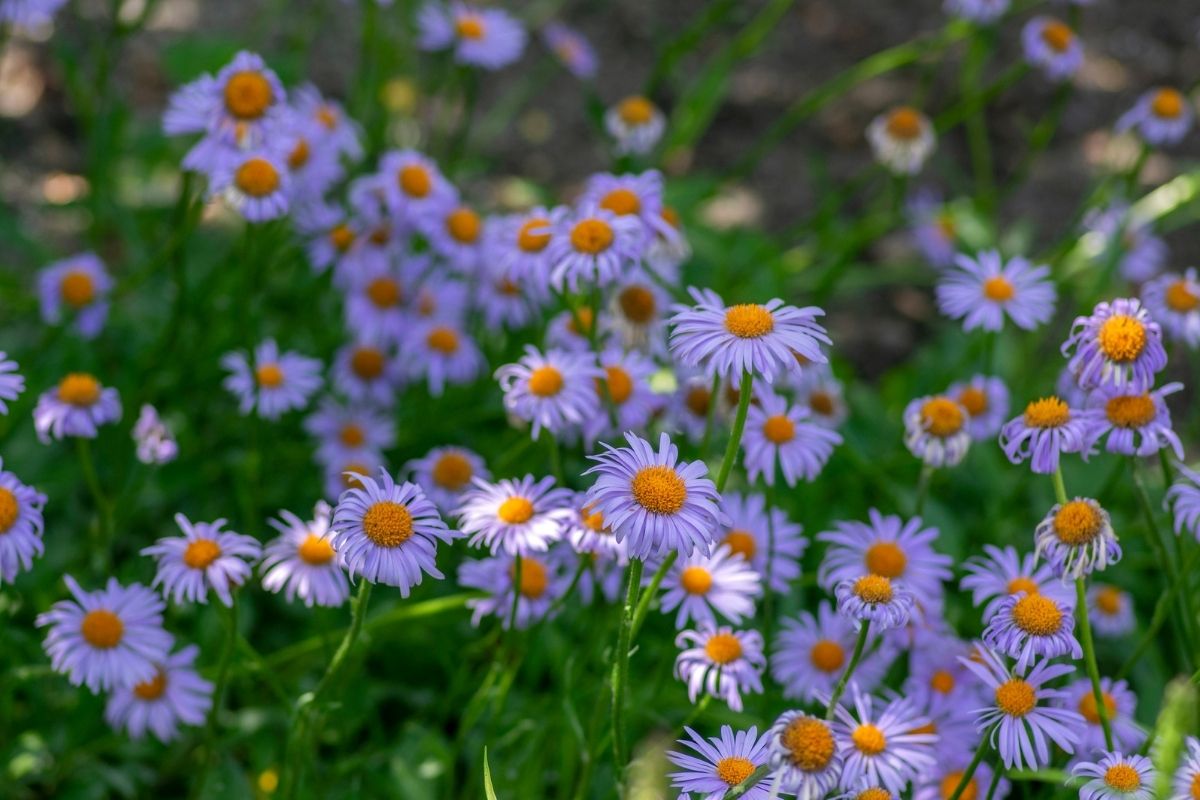 You might confuse an Aster for a Daisy, but the two are quite different if you take a closer look! Both flowers belong to the same family but each has its own unique meaning and symbolism.

An Aster is as bright as any flower in the garden with its lush petals, just like how a star lights up the night sky. A twinkle, twinkle little star.

The Asters were first defined botanically in 1664 as a perennial leafy-stemmed plant with showy flower heads lined with numerous rays of petals. Often confused as daisies, these flowers are actually derived from the Greek and Latin asterisk meaning a star.

The flowers belong to the genus Aster of the Asteraceae or daisy family and are probably the reason why the two look so alike!

Flowers from the genus Aster are native to the many regions of Europe and Asia. Such species include the Alpine Aster (A. alpinus) and Tatarian Aster (A. tatarius). Surprisingly, other genera also have blossoms identified as Aster.

The Hairy Golden Aster (Heterotheca villosaI), New England Aster (Symphyotrichum novae-angliae), and Schreber’s Aster (Eurybia schreberi) are just a few of those flowers. The big difference between these flowers is that they are native to North America.

These blossoms are also famously called Starworts or Michaelmas Daisy by English folk as they bloom during St. Michaelmas Day in September.

Since these blossoms bloom during St. Michaelmas Day, they are actually also the birth flower for September. The blooms are also symbolic to the Greek Goddess of innocence and purity, Astraea or Virgo. Their tears fell down onto the Earth like stardust and upon touching the ground bloomed into a vast spread of colorful Asters.

In the language of flowers, the blossom’s head with intricate rays of petals also symbolizes modesty and orderliness.

The Asters also hold a bounty of meanings like the numerous rays of petals it has. It embodies a star fallen from the heavens and conveys the meaning of daintiness and delicacy.

In a more appreciative sense, the flowers also mean admiration, beauty, and attraction. A lot more interesting meanings are associated with these blossoms given the several colors it has!

What does a White Aster Flower Mean?

Starworts with rays of white petals send the message of satisfaction and patience. Apart from this, the whiteness of these petals also symbolizes light and guidance.

What does a Red Aster Blossom Symbolize?

What does a Blue Aster Floret Indicate?

Faith and wisdom are what is indicated by the sight of blue Starworts. The streaks of bright blue petals actually stand for variation and diversity.

What does a Pink Aster Bloom Represent?

A pink floral is a crowd favorite in most gardens and a pink Starwort is no exception! These adorable pink-petalled flowers represent someone’s deep thoughts about you! Not surprisingly, they also represent fidelity and jealousy.

What does a Purple Aster Flower Symbolize?

Purple flowers are very a calming sight and often attributed to royalty. In contrast, purple Starworts symbolize healthy emotions and connections. Connections may be in the sense of relationships which is why it is also symbolic of a fond farewell and pleasing afterthoughts.

What does a Yellow Aster Blossom Mean?

The fuzzy Mr. Sun is the most common symbolism for yellow flowers. A Starworts’ yellow petals symbolize cheerfulness while offering a warm welcome to anyone who admires it.

What is the Cultural Significance of an Aster Blossom?

In France, Starworts are regarded as death flowers. After the last World War, French soldiers who were laid to rest had Starworts placed on their graves to symbolize peace.

What is the Spiritual Influence of an Aster Floret?

The presence of a Starwort blossom prompts your self-evaluation in life. It will guide you in making healthier decisions and conclusions that see beyond what is known to you. This guidance you achieve will provide more clarity for the larger world. Unbeknownst, these flowers also ward away evil spirits while on the journey.

What is the Biblical Meaning Behind Asters?

The streaks of delicate petals of Starworts indicate each of the fruits of the spirit. It displays the righteousness of Jesus through the lives of His disciples. As God has promised Him, these fruits strengthen the spirit, soothes the temper, strikes the anger, rids of envy, subsides pride, removes temptation, and builds hand. The flowers are symbolic of His patience.

What are the Folklores Associated with Asters?

There are a few very interesting folktales known for the Starworts. In European medieval times, there was once a practice where the leaves were burnt to frighten serpents.

For Indian Tales, it was said that two sisters fled a tribal dispute by hiding in an enchanted forest. As they lay to rest, an Herbal woman saw them lay there and glimpsed their future. The girls were to be hunted down by enemies so the woman sprinkled her magic like stardust and turned the sisters into purple and yellow Asters.

According to Greek mythology, the purple Asters hold a tragic story. Mistaken by the thought of the death of his beloved son, the flowers bloomed from where King Aegeus’ blood dripped as he killed himself.

Meanwhile, a Norse mythology has a less dark story to tell about these flowers. It was believed that any word with the prefix as – like as in Aster, meant Asgard, the Scandanavian heaven. Any word a prefix such as that also meant that it was heavenly and rightfully belonged to the Gods.

What does an Aster Floral Tattoo Symbolize?

In Chinese cultures, Asters signified a woman’s charm, beauty, humility, and elegance. The choice of this floral tattoo is symbolic of all the said attributes of a woman. Aside from this, it is also symbolic of good fortune and healing from within.

There is a whole list of things Asters can be used in aside from simply being garden ornaments, cut flowers, or potted plants. Asters have benefits such as anticancer and antioxidant properties.

A popular trend is that dried and fresh leaves or flowers are added to cook dishes or salads as a garnish. Chippewas also practiced consuming the large leaves as a vegetable staple.

In the European medieval era, Asters’ roots were popularly used as feed for sick bees. Additionally, the root stock can also be used as a purgative to treat common cough and cold and menstruation pains. An aromatic concoction can also be made as a remedy for chronic gastroenteritis.

In the 1600s, herbalist John Parkinson made a poultice from the flowers to apply to dog bites. Steaming and infusing these flowers were also used to treat sinuses or ear infections.

For the Latin Americans and English fold, infusing the flowers is used to treat diarrhea, fever, earaches, and gas pains. A word of caution that it’s a must to always consult a medical professional before using this plant or any part of it for medical purposes.