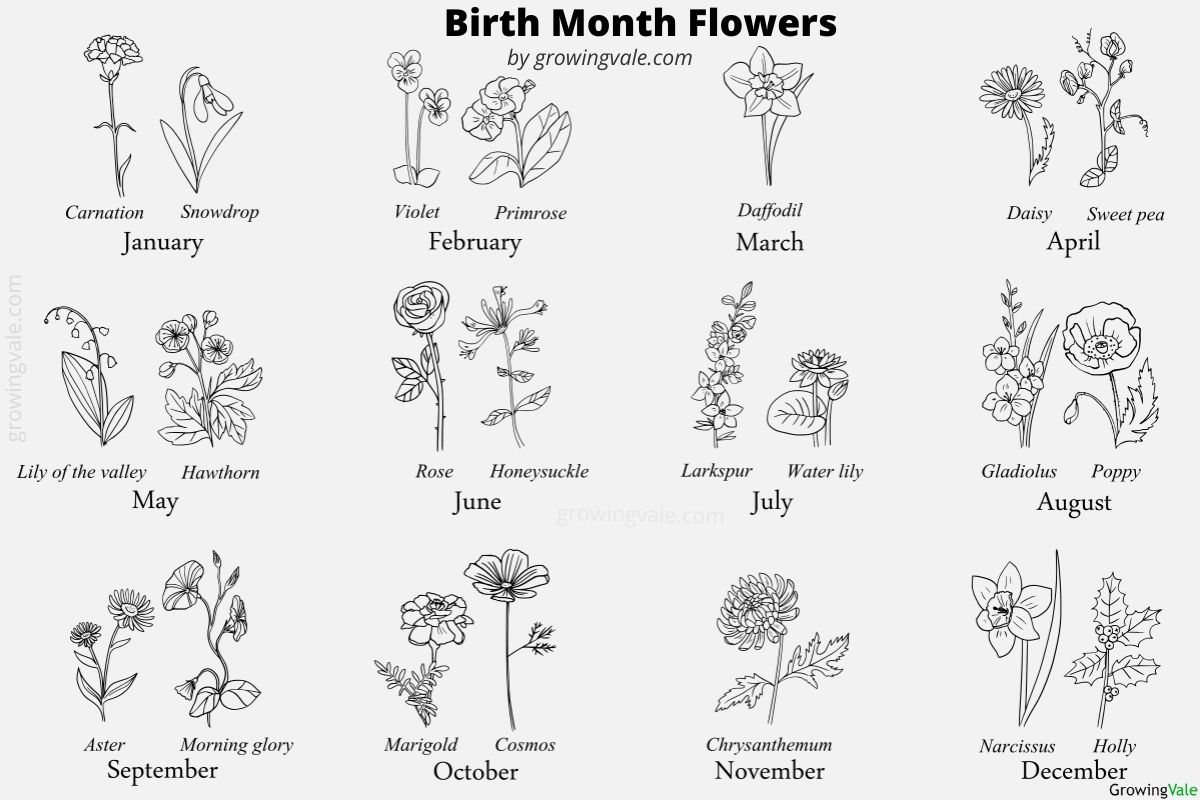 Every month of the year has unique and interesting qualities. Nature shows us the hidden truths and beauties of an ever-changing world. These truths reflect not only the natural world but also the qualities of people born in each month.

Flowers that thrive and bloom in colder months must persevere despite harsh conditions, while summer flower varieties must be bright and beautiful to attract pollinators in a very competitive world. The flowers representative of each month are known as birth flowers and each of these flowers has a story to tell. Read on to find out what your birthday flower symbolizes.

Carnations (Dianthus caryophyllus) are herbaceous, fringe-petaled flowers belonging to the Caryophyllaceae family. Sometimes called grenadine or clove pink, carnations have delicate single flowers with double blossoms and a long stem. They grow in a wide range of colors from pink to white to purple and beyond.

The herbaceous perennial snowdrop (Galanthus nivalis) flower is one of the earliest signs of spring. Their delicate white bell-shaped flowers have two circles and six petal-like tepals. There are green markings on the smaller inner petals.

The snowdrop birth flower represents purity, rebirth, innocence. It also represents hope and new beginnings and is also seen as a sign that a new start is always possible – just as January is the fresh start to each new year.

Violets are wild temperate-climate flowering plants. They are small-flowered annuals or perennials. Violets have oval or heart-shaped leaves that are scalloped. Their purple flowers have five petals and one of the petals often has a vein of a different shade.

With stalked leaves, five petals, and its trademark yellow center, the primrose (Primula vulgaris) is a lovely spring flower. The blossoms can be any color except green and, like the leaves, are completely edible. Primrose plants are short-lived perennials native to northwest Africa, southwest Asia, and western Europe.

As a February blossom, the birthday flower primrose represents the femininity of women and their ability to reproduce, as well as youth, new beginnings, and birth. During the Victorian era, it also represented new love and was used as a way to tell someone “I can’t live without you”.

The bulbous perennial Daffodil (Narcissus pseudonarcissus) has six sunny yellow or white petals with a trumpet-shaped corolla. Each daffodil has between one and twenty blossoms per leafless stem.

While daffodil as March birth month flower most commonly represents spring and new beginnings, they symbolize many other experiences. They can signify a sense of inner reflection and self-awareness as well as creativity and renewal which often leads to forgiveness, inspiration, and renewal.

Considered to be the oldest flower on earth, daisies (Bellis perennis) are herbaceous perennials with short stems, many lovely white petals with a pink or yellow center.

The symbolic meaning of the April birth flower daisy can be traced back to the Celtic legend of the goddess Freya who represented innocence, purity, and fertility. Daisies now embody new beginnings, childbirth, and motherhood.

With its feathered leaves and numerous tendrils, the climbing annual sweet pea (Lathyrus odoratus) is a sweetly scented flower with Mediterranean roots.

Sometimes called the ‘Queen of Annuals’, this April birth flower is associated with blissful pleasure because of its enchanting blossoms. They also signify gratitude and loyalty as well as good-hearted farewells. According to some folklore, sweet peas can also be a source of strength and help to reveal truths.

Lily of the valley

The beautiful but dangerous lily of the valley (Convallaria majalis) is a low-growing woodland perennial with six-petalled white blossoms that grow atop two-leaved stems.

When they are grown or shared in May, the birth flower lily of the valley represents both humility and rebirth as well as sweetness, purity, and chastity. In some contexts, it also represents happiness from luck and protection.

Hawthorn shrubs (Crataegus monogyna) grow spiraled leaves with serrated or lobed edges. The blossoms have five petals and a red stamen. After blooming, the plant bears delicious, berry-like fruit, but one must brave the thorn-tipped branches to enjoy.

Seen as an enchanted tree since Celtic times, the May birth flower hawthorn represents love and protection. They bring an air of elegance into any life and can protect with their small thorns but at the same time are also nourishing and fertile.

One of the most well-known flowers in the world, roses are flowering perennial woody shrubs with many growth habits and blossom types. They come in a rainbow of colors.

Roses are well-known for their symbolic meaning of love. As a June birth flower, they represent not only romantic love but also friendship. Certain colors of roses embody innocence and purity, while others represent grace, gratitude, and joy.

Native to the northern climates of the Americas and Eurasia, the hardy twining climbing plants (or occasional shrubby bushes) are tender and cold-sensitive. The plants have oval leaves and symmetrical flowers that produce a beautiful fragrance and edible nectar.

With its sweet-scented flowers, the June birth flower honeysuckle symbolizes pure happiness. It inspires affection and sweetness. How honeysuckle grows exemplifies the tender nature of true love and the closeness of a lover’s embrace.

Native to the northeastern United States, the larkspur is also known as delphinium which means dolphin in Latin. Their beautiful flowers with five petals are toxic.

As a July birth flower, larkspur primarily symbolizes open-hearted love and the strong bonds of attachment that comes with such strong love. Such love only comes from the sincere dedication and positivity that are also associated with larkspurs.

The rhizomatous aquatic herb water lilies (Nymphaeaceae) are attractive herbaceous perennials that grow in temperate to tropical locations. Their beautiful flowerheads float atop long stalks can be any color from white to bright yellow to blood red.

As the only aquatic birth flower, the water lily is strongly associated with rebirth and purity. All ancient cultures believed water lilies are linked to the gods and their spirituality. These ties are linked to innocence, wellness, and peace as well as hope and celebration.

The classic perennial gladiolus (Gladiolus communis) has giant spikes of flowers that can grow to be up to 150cm/5ft tall. They are native to the eastern hemisphere and members of the iris family (Iridaceae).

With their tall, sword-like stature, the August birth flower gladiolus is reminiscent of gladiators and thus represents strength and integrity. Due to their historical association with gladiators – their Latin name gladius means sword – they are also associated with honor, strength of character, and integrity.

Members of the Papaveraceae family, the herbaceous poppy plant is famous for its beautiful flowers. Their growth patterns are unique to each of the 70 cultivars. Perhaps the most famous variety is Papaver somniferum, which is the source of the narcotic drug opium.

Although they are native to Europe, aster (Aster amellus) are now grown and loved throughout the world. Their star-shaped blossoms come to life in many colors such as pink, red, white, lilac, and mauve during the early fall months.

Once placed on the altars of the Greek gods, the September birth flower aster represents love coupled with faith and wisdom. It also signifies patience, elegance, and sometimes remorse about past actions.

The hardy vine morning glory is a member of the Convolvulaceae family. It is perhaps best known for its habit of opening its tightly closed blooms in the early morning and closing again as the sun sets.

With its daily ritual of opening and closing its blossoms, the September birth flower morning glory is considered a contrasting flower of duality. On the one hand, it represents love while on the other hand, it signifies unrequited love making a complicated birth flower duality. Morning glories can also symbolize the morality of life.

Calendula officinalis, better known as the marigold, is an herbaceous annual with branched stems and layers of petaled flower heads. They have been cultivated for so long that’s origin is unknown, although it is suspected to be southern Europe.

With its fiery orange, yellow, and orange blooms, the October birth flower marigold is associated with the warm sun and the optimism, happiness, and joy that comes with that warmth. However, marigolds can also sometimes have a contradicting meaning when they bring about darker emotions like despair, grief, and jealousy.

Cosmos (Cosmos bipinnatus) have a broad ring of petals complemented by its feathery flowers. Native to the shrubby meadowlands of Mexico, the adaptable and versatile plant is also attractive to bees, butterflies, and hoverflies.

Representing peace, tranquility, and innocence, the October birth flower cosmos helps the body’s life energy to flow by removing spiritual blockages. Wearing the flower can bring about inner harmony and have a positive effect on the wear’s energy.

Originating from Asia and Northeastern Europe, chrysanthemums (Chrysanthemum indicum) were first grown in the 15th Century B.C. as a flowering herb. In modern times, they are grown throughout the world as herbaceous flowers with alternately arranged leaves and an array of many flowerheads.

The single November birth flower chrysanthemum has many symbolic meanings ranging from friendship to rebirth to devotion. However, above all else, they signify loyalty, devotion, and love. This love brings happiness and joy.

Narcissus is actually a genus of spring-blooming perennials. Paperwhites (Narcissus papyraceus), are a unique cultivar from the Narcissus strongly-scented upright plants with lovely white blossoms that embody the birth month of December. Paperwhites are the only variety of narcissus that does not need a chill period to blossom.

As a December birth flower, narcissus represents friendship, happiness, and positive energy for friends or family. Since this is a unique white variety, it embodies spirituality, including the resurrection of Jesus, as well peace, purity, and innocence.

A popular winter plant – especially around the holidays – the holly plant (Ilex aquifolium) is best known for its bright red berries. It is also an evergreen plant with glossy leaves that have a spiny margin. Although they are beautiful greenish-white flowers, they are easy to miss because they are so small.

As a symbol of eternal life and fertility, the birthday month flower holly is believed to have magical powers that bring domestic happiness and joy. Holly is a common symbol in Christianity as its sharp leaves are believed to represent Christ’s crown of thorns and the berries his blood. It is also strongly associated with Christmas and holiday joy.

We hope you enjoy our list of birth flowers by month. Also check this Language of Flowers guide to learn more about flower symbolism.