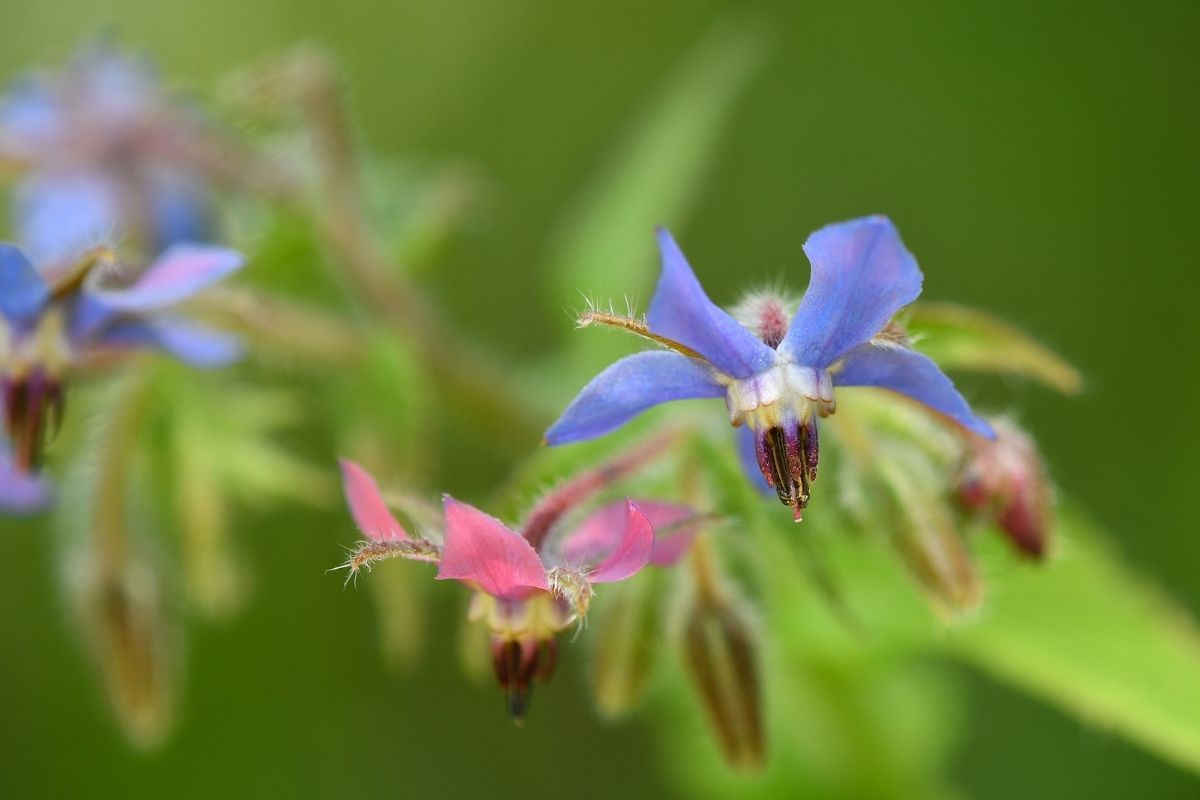 The floral name Borage sounds like something you would hear from an old traditional herbal medicine shop. Take a closer look at this flower and you’ll begin to see some very distinct and unique characteristics! It appears prickly and similarly shaped like a little star. The most interesting meaning and symbolism about this flower may just lie behind its prickly nature.

The borage flower was first defined in botany in the 14th century. It was described as an annual prickly herb with loose star-shaped flowers. Surprisingly, the plant is actually a weed with several uses in medicine and culinary. The flowers are native to the Eastern Mediterranean region but are now popularly cultivated throughout Europe, Britain, and North America.

The floral name actually takes after several cultural words. Interestingly, borage was also believed to take after the Gaelic word burrage meaning courage. It can be derived from the Anglo-French word bourage, Middle Latin word borago, or Arabic word abu raq. To put it simply, all these three words translate to the same meaning of being a source of sweat since the plant is a diaphoretic!

The blossoms belong to the genus Borage of the Boraginaceae family. Did you know that the genus is derived from two languages? Borage can be traced back to the Latin word burra and the French word bourrache meaning a hairy garment. This is most probably about the prickly-like things on the leaves!

Common Borage flowers are scientifically called Borago officinalis. Besides this, it can also be known through its other common names such as Star flower, Bee plant, or Burrage.

In the time of great kings and queens, borage flowers were embroidered onto mantles of knights and jousts to symbolize their courage and loyalty to the kingdom.

Borage can also symbolize interesting things in many traditions across the globe. The flowers are a representation of trust and bravery in the Spirit Path Stone of the South. In the United Kingdom, the blossoms are honored as rays of hope promoted by Cancer Research UK during National Cancer Day.

The most manifesting symbolism of this flower actually lies not in the language of flowers or culture. If you take a closer peep, the whole plant is actually symbolic of roughness and toughness of character.

Many meanings are beheld by borage flowers. In the Victorian language of flowers, it conveys the meaning of being straight to the point, rude, or even harsh sometimes! Famous herbalist John Gerard gave the most notable meaning for these flowers: courage.

Taking all this aside and looking deeper into the beauty of this flower, it truly sends the message of trusting in the process of healing and growth. Also, something to take note of is that these flowers are a motif for the gift of balance and harmony.

What does a Blue Borage Flower Mean?

Borage with blue flowers convey the meaning of serenity. Aside from this, it also embodies unwavering courage and bravery.

What does a Pink Borage Bloom Symbolize?

Pink borage blooms symbolize being blunt and straightforward. Oftentimes seen as an asset, best that these traits be kept in check!

What does a White Borage Floret Indicate?

Creative and genuine talent is indicated by a white borage flower. And accompanying this, it also represents contentment and satisfaction.

What is the Cultural Significance of Borage Flowers?

During the era of Elizabethan England, these flowers were a favorite emblem of the folk. The emblem motif symbolized courage and gladness of heart. For the English during this time, the flowers sent the message that your attention is not welcome! This is probably why these flowers also represent being straightforward!

In Spain, there is a famous expression behind borage blooms. The saying goes “It is Borage water!”, meaning that whatever medicinal claims these flowers have are bogus according to those who have tried! Truly quite funny and strange!

What are the Folktales Associated with Borage Blossoms?

There are several quite interesting folktales the borage flowers are known for. In the field of love, shy men had their drinks mixed with these flowers to provide courage before making a marriage proposal!

On a much darker note, the flowers are believed to display gloomy thoughts. This is believed to be because of its coarse and bristled appearance. Contrary to this dark belief, its other common name Star flower actually said to be a good sign from the heavens. This sign sends the message that guidance and help are on the way!

What is the Biblical Meaning of Borage Florets?

For Christian devouts, the borage flowers symbolize excellent quality and pure intentions hidden behind humbleness and simplicity. The flowers are an embodiment of the Virgin Mary and her divinity.

What is the Spiritual Influence of Borage Blooms?

The floral essence of borage flowers lightens the struggles of depression and eases discouragement. It brings positive flows of energy and multiplies the feelings of joy, enthusiasm, cheer, and confidence. Not surprisingly, the positive energy present helps drive away impure thoughts and actions.

The presence of such flowers also aids in strengthening self-sufficiency and independence in career and personal life. As the floral saying goes “I learn to stand on my own”.

What does a Borage Floral Tattoo Symbolize?

A choice of a borage floral tattoo very famously symbolizes unwavering courage. Additional to this, this floral tattoo also portrays resilience and strength.

This plant being considered as a weed doesn’t stop it from being a garden plant. It is planted in most sunny gardens because it attracts many bees. It gets its other common name Bee plant because it is used for feeding honey bees!

Aside from being weedy, it is also an esteemed plant often used in medicine and culinary fields. The leaves and flowers are commonly garnished in fresh salads or cooked as a vegetable in European regions. The leaves can be fresh or dried when seasoning soups and stews.

The flower contains diuretic, demulcent, and emollient properties. It can be applied externally as a treatment for inflammation and swellings. In traditional medicine, an infusion made from the leaves serves as a remedy to improve kidney functions and soothe respiratory problems. A flower wine was also made in medieval times to treat melancholy, anxiety, depression, and heartbreak.

Did you know that the flower seeds contain omega-3 fatty acids? Well, it surprisingly does! According to studies, this fatty acid has anti-inflammatory properties helping protect the heart! A word of caution that it is a must to always consult a medical professional before using this plant or any part of it for medical purposes.