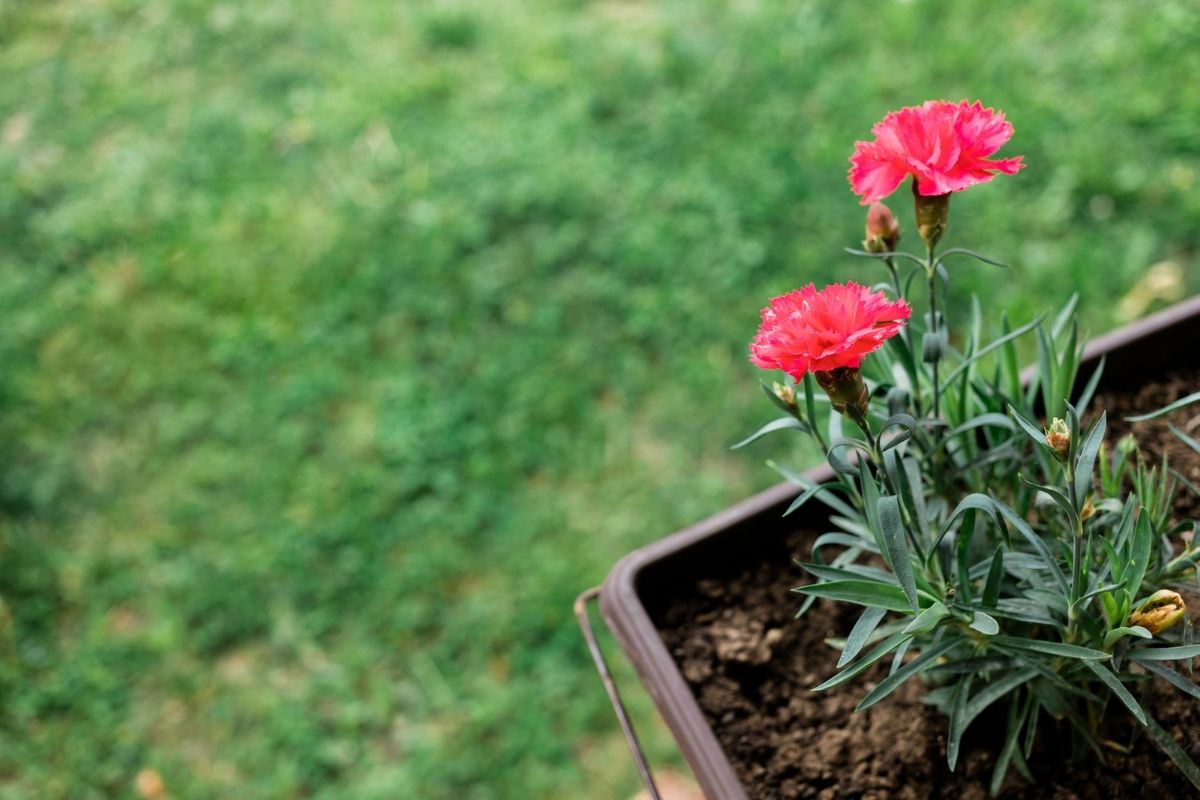 Carnations are surely among some of the world’s most popular flowers out there! It’s no doubt at all since it radiates with beauty and such grace. The intricate design and gorgeous colors of these blossoms make them stand out! Behind any flower’s grand popularity is a hidden meaning and intriguing symbolism – and Carnations surely have a lot of both!

Growing Carnation flowers is as easy as pie! Some might even say this is a sacred flower fit for only kings and queens – if you want to know why keep on reading more to find out more about carnation flower’s meaning.

The floral name Carnation was first used in 1566 and has been cultivated for over 2,000 years! It described an herbaceous plant with double petal flowers mostly pink in color. The flowers had quite an interesting spicy fragrance used extensively in the floral industry. Colombia is the world’s largest producer of Carnations for this industry followed by Israel, Kenya, and Spain!

Carnations belong to the genus Dianthus of the Caryophyllaceae or Pinks family. 300 species comprise the genus and are native to Eurasia and the Mediterranean. The flowers are divided into two general groups to distinguish their type – the garden and perpetual flowering Carnations.

The genus name comes from the Greek words Dios meaning the god Zeus and Anthus meaning flower. The floral name though is a whole different story. These flowers set the trend for the famous flower crowns! It comes from the words coronation or corone using flower garlands – it was first used by the ancient Greeks and Romans to honor their gods!

The Carnation is scientifically known as Dianthus caryophyullus. It also goes by other common names such as Grenadine and Clove Pinks. Some of the popularly cultivated Carnations include the Sweet William (D. barbatus), the Chinese Pinks (D. chinensis), and the Cheddar Pinks (D. grataniapolitensis).

Carnations are held in high esteem as a symbol of a strong and pure woman and of course – the sacred gods. In some cases, these flowers in full bloom are symbolic of expressing love and affection.

The most popularized symbolism of Carnations was started by Anna Jarvis of Philadelphia in 1907. She personally selected a pink Carnation as the symbol for Mother’s day – and the trend has stuck up to this day!

Carnations are also known as the birth month flower for January. Its name comes from the word Carnis symbolizing flesh and refers to the incarnation of God through Christ.

In Spain, Dianthus flowers are regarded as floral symbols depicting divinity for strength, protection, and healing. A red Carnation flower is also the country’s national flower.

A flower befitting kings and queens. Carnations in a straightforward sense literally mean the flower of the gods. Just like amazement for the heavenly bodies, a carnation can also speak of fascination for the gods or kings!

In a much more in-depth understanding, Dianthus flowers can stand for strong and well-grounded bonds of love – such as that of a mother and her child. These blossoms also represent good health and energy as well as impulsiveness – sometimes!

What does a White Carnation Flower Mean?

Soft yet ivory white Carnations speak of sheer innocence and faithfulness. If being pure like that isn’t enough, these flowers also mean good luck for those with a good heart!

What does a Pink Carnation Blossom Symbolize?

Carnations are popular in pink – that’s why it’s also called Clove Pinks! A very important symbolism of this flower is the love of a woman but most especially, a mother.

What does a Purple Carnation Floret Indicate?

A Dianthus flower with purple petals indicates a playful or changing mood and manner! But don’t worry, these traits are quite fanciful if quaint and not offensive!

What does a Red Carnation Bloom Represent?

What does a Yellow Carnation Flower Symbolize?

Sadly, Carnations with yellow petals have gloomy symbolic meanings. It stands for expressions of disappointment and disdain. It’s actually a subtle way to affirm a way to symbolize a rejection!

What is the Cultural Significance of a Carnation Blossom?

The cultural impact of Carnations is just as rich as its history, meaning, and symbolism. In the Netherlands, white Carnations are worn as ornaments to commemorate veterans and the efforts and sacrifice of the resistance during the 2nd World War.

Red Carnations are also held in the same regard in Portugal. The flowers represent the 1974 military and civil coup called the Carnation Revolution and were placed on muzzles and worn on clothing.

Such flowers also culturally symbolize socialism and the labor movement. It was the popular floral motif used during Worker’s Day or more commonly known as May Day.

What is the Biblical Meaning of a Carnation Floret?

The pink Carnations have a special meaning in the Christian religion. Many believers say that this flower was the first to appear while Jesus carried His cross.

Others firmly believe that Dianthus flowers were what sprung from Mary’s tears as she watched Her Son suffer and in pain. This was what brought about Carnations symbolizing a mother’s love and given a bountiful on Mother’s Day.

What is the Spiritual Influence of a Carnation Bloom?

The spiritual strength of Dianthus blooms lies in its beautiful petals and soft pink shade. These flowers provide a strong foundation of protection and courage and promote emotional and physical healing.

It is a flower made especially as a source of mighty strength. These initiate the seasons of change in life while soothing and healing the heart on the journey from past trauma. What this flower does best is engage in the sense that the idea of rebirth is a beautiful yet mysterious thing – one that should not be doubted!

What are the Folktales Associated with a Carnation Flower?

There is a folktale going around about the magical abilities of a Carnation blossom. It’s not the type of story you hear every day! Folkloric Italians believe that the flowers were handed on St. John’s Day or Eve to suspected witches!

The witches under the flower’s enchantment would count the petals one by one and would allow the captured to break free and run away for her grip!

Similarly, placing these fresh flowers around your house has special powers. Some say that placing a vase of these near the front door will offer protection from unwanted evil spirits. You can also place them on top of the kitchen dining table to invite bounty!

Or if you would want good things around you, place an amulet of Carnations in your pocket to attract protection, healing, and love!

What does a Carnation Floral Tattoo Symbolize?

The beauty of a Carnation tattoo also has a very deep and heartfelt symbolic meaning. Those few brave souls who choose this design want to embody their deep admiration and keen passion for all the beautiful things in life.

Such people with amicable hearts and souls want to represent their love and beauty with this tattoo!

Carnation plants and their flowers make a great addition to growing in an outdoor garden or pot. It makes a great cut fresh flower arranged in bouquets or vases – especially for remembering mom’s on Mother’s Day or Veterans in World War 2. But its most famous use is as a crown for coronating the ancient Greek gods and goddesses!

Aside from their floral uses, Dianthus flowers also have a few medicinal applications. A tea infusion can be made from these flowers that have a calming and healing effect on the nervous system. This infusion also has claims of treating common kidney and bladder ailments as well as eczema and constipation.

In historic European times, the flowers were traditionally used to treat common fevers. During the Elizabethan era, these were also used as a spice in wine and ale as a substitute for expensive cloves.