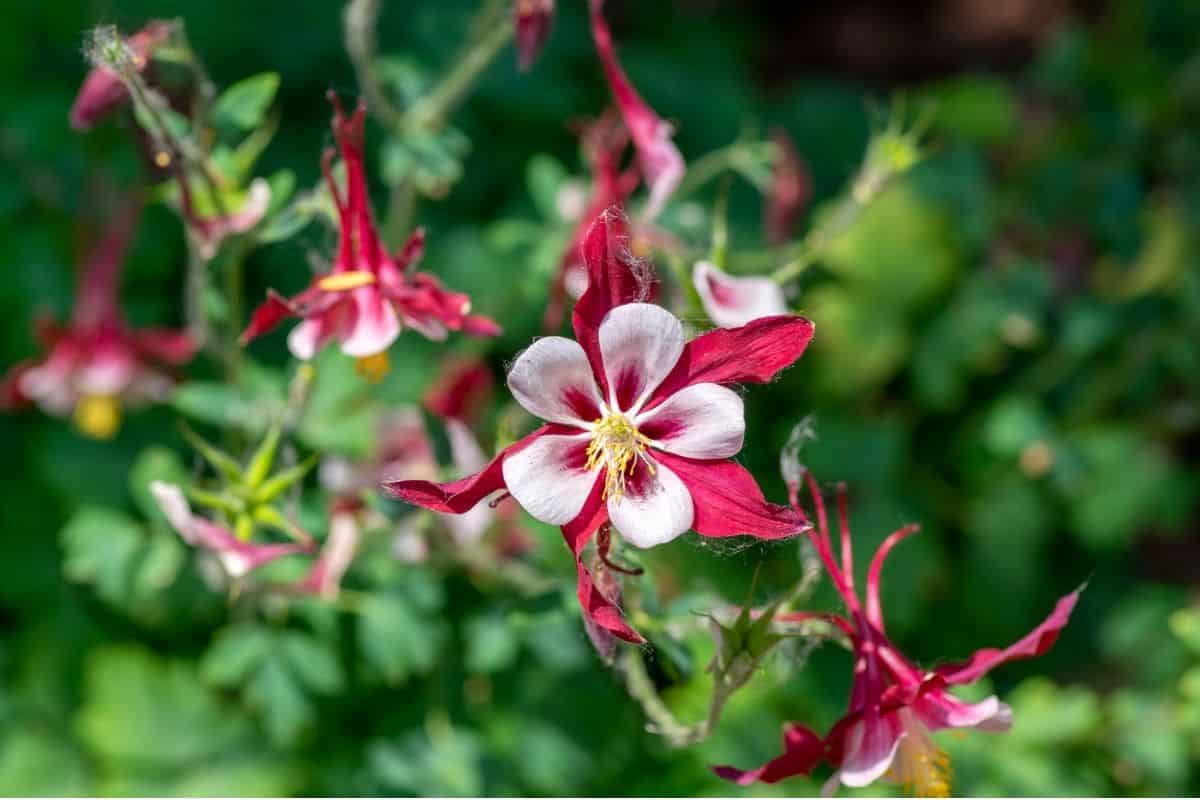 The Columbine is one of the most renowned exquisite flowers of the world. This perennial herb is a recognized plant for some of its quite peculiar meanings and symbolism throughout history. Many say that the columbine flower meanings come from its rich history. Meanwhile, others say that the columbine flower meaning symbolism comes from many folktales and beliefs.

The many columbine varieties are not only enchanting but also enticing for garden enthusiasts. Many columbine flower meanings say that the plant truly means fortitude. Different colors of this flower also have different meanings. For instance, blue columbines represent tranquility while red columbines symbolize anxiousness. Other colors such as pink and purple columbines represent femininity and penance, respectively.

The Columbine belongs the plant family Ranunculaceae or buttercup family with over 70 species to a 100! Other family members include the buttercup, delphinium, and clematis.

Columbine, derived from the Latin name or Latin word Aquila, denotes the similarities of the flowers’ spurred petals to that of an eagle’s claw or eagle’s talons.

Aquilegia also refers to the European crowfoot, Granny’s Bonnet, or court jester’s hat because of its star like outer petals and long spurs. It is a common flower in Europe and mostly thrives throughout the northern hemisphere regions such as North America.

You can also find these flowers up in snow capped mountains with higher altitudes but can still thrive best under full sun or partial shade areas. The plant is known to contain cyanogenic glucoside but can still be used as a medicinal herb.

These beautiful flowers truly love the wild alpine settings and have a reproductive isolation problem because two plants are far from each other or are not capable of fertilizing each other, so here are some interesting facts about the columbine flower.

It can attract pollinators such as bird, bees, and white butterfly but only a specific pollinator with long tongues can reach inside the flower to feed on nectar! One great example of these pollinators include the sphinx moth.

Just a head’s up, another fact about columbines is that it’s very unlawful and rude to pick up these flowers when planted in private land.

The red columbine has been said to look a lot like a hat seen in court jester and in tarot readings is said to symbolize the fool card. Aquilegia symbolisms are so diverse that it dates back to eras of ancient Greece and Rome cultures.

According to Roman and Greek mythology, the elongated petals of columbine interestingly symbolized a provoked implication of an erect penis. Ancient Romans had even come to say that the gold pistils were symbolic of manhood or a sexual jab at a romantic partner.

Another symbolism from the Greek and Roman mythology is how they believed that columbines were embodiment for Venus and Aphrodite the goddess of love and beauty. The goddess of love said in a legend that seeds placed in a small pouch will enchant a lover to whoever carries it around.

Columbine’s association with modern symbolic meanings include spiritual enlightenment, courage, good fortune, and even endurance during tough times. These perennial plants have more than just a pretty flower to offer given its etymological meaning!

Along with lavender, other groups have other interpretations for columbines such as being an expanded consciousness or spiritual evolution for a spiritual seeker. It most speaks of guidance from two worlds or other worlds.

During the time of the Renaissance period, columbine flowers symbolize of the sorrows of the Virgin Mary. In some Christian stories or Christian mythology, columbines represented white doves and were symbolic of the Holy Spirit.

Meaning of the Columbine

When it comes to flowers and their meanings, there’s no doubt that the columbine is a well known flower. The definition of this flower can be as wondrous as the colors it represents.

Since it is a hardy flower and mountain climber, it is sometimes thought of as the thankless flower. When in bloom, the common meaning of a columbine is similar to that of delicate beauty. It is no exception to the dainty colors of Aquilegia flowers during bloom in spring.

During the Victorian era, the columbine flower meant “resolved to win”. In the high mountains and with such a unique environment, columbines have the meaning of gold rush or gold found because of the time it was first discovered. The columbine is a powerful reminder for achieving a better understanding and attaining a high spiritual level.

Since columbines grew up in lofty heights under part shade, some say that a columbine shares traits with a mountain goat and sometimes, columbine reminds folks of wild animals that roam around steep mountainsides because of how it grows along edges of rocky mountains.

What Does a Blue Columbine Flower Mean?

The color blue is usually associated with the mystique of the oceans and seas. A cluster of blue columbine is nostalgic to that of a calm, clear blue sky. And because of this, Aquilegia blossoms with beautiful blue petals symbolize hope and tranquility.

What Does a Red Columbine Flower Represent?

Although these red flowers are attributed to love or platonic love, more passion, and primal energy, the symbolism of this color for Columbines conflicts with this norm. The red columbine meaning is quite opposite to that of a blue one – it can make you feel fret and anxious. So don’t plant red columbines unless you want to feel anxious!

What Does a Pink Columbine Flower Signify?

The pink columbine flower meaning is something that touches on the feminine side. Pink Aquilegia florets epitomize the beauty and serenity of a woman. Contrary to popular belief, pink columbines are viewed as bad luck to give to a woman.

What Does a Purple Columbine Flower Symbolize?

Purple is a color notable to royal families. Albeit the symbolism of purple flowers is unlike that of royalty, a purple columbine flower meaning is instead associated with passion and penance.

What Does a Yellow Columbine Flower Mean?

Yellow columbine flowers have a unique meaning. The yellow flowers of this plant represent a feeling of nimbleness and vivacity. These yellow columbines can also mean happiness.

Some also say that when you are working hard, your financial matters will flourish – this is also an amazing meaning behind a yellow columbine.

What Does a White Columbine Flower Represent?

A white columbine flower meaning is one mostly attributed to divinity. Columbines with white petals express holiness, purity and innocence ascribed to the life of Christ.

What Does a Columbine Tattoo Symbolize?

Columbine tattoos are uncommon as floral body art design compared to other plants. This design choice embodies a collection of meanings and symbols. For instance, a columbine tattoo is symbolic of seven gifts in Christianity or the seventh chakra that affects one’s super conscious mind and other life forces in the physical realm.

What Does the Columbine Portray in Art?

Art provides a medium of creativity and expression with various forms and techniques. Aquilegia flowers in works of art were evident in the early times of Christ. The flower was depicted along with prophets, saints, and even protestant reformers conveying fidelity and support of the Holy Spirit.

Columbines were very well-detailed in Shakespeare’s time. These flowers were mentioned in the Shakespeare garden of poems and plays such as in the phrase of dramatist George Chapman. According to him, columbines symbolize ingratitude.

Meanwhile in the esteemed Hamlet’s act IV and Comedy Love’s Labor lost, the Columbines were also symbolic of ingratitude and infidelity where Ophelia risks going insane when collecting the plants and giving these to King Claudius. In some sense, columbines also meant risk taking.

The poet William Browne also wrote in his poem that columbines being lost or a neglected love. He associated these flowers with these meanings because of how it’s nature as a hardy perennial that flourished in high elevations or high mountains. Another great thing emphasized in his poems is how his writings colors flowers with meanings and symbolisms.

What is the Biblical Significance of the Columbine?

The Bible is a book full of meaning and symbolism for different plants and flowers. In Christian religion, Columbine is no exception to this as it is signified as a flower praising God.

The floral spur means dove perching together and that its tripartite leaves are symbolic of the Holy Spirit. In fact, a bouquet of seven columbine blossoms each represents the seven gifts of the Holy Spirit: wisdom, intelligence, advice, strength, knowledge, reverence, and fear of God. Meanwhile, the motif of these flowers indicates the three Christian virtues of faith, hope, and love.

What is the Cultural Significance of Columbine Plants?

Many different cultures have different symbolic meanings for the columbine. In ancient Nordic cultures and Nordic mythology, this beautiful flower was symbolic of the fertility goddess Freya. This is why a pink columbine is most associated with her in norse mythology.

Celtic culture also believes that Aquilegia represents a door to another dimension. In the medieval era, ancient Celts believed the blossoms were thought to be consumed by lions. This led to a custom of rubbing the flower on both hands or adorning emblems as a mark of courage.

Consequently, in Germanic folklore particularly in ancient Austria, there were spreading beliefs that denoted that the flowers represent five doves flying together or doves in a circle. It was seen as a symbol of spiritual ascension. Other symbolic connotations of the flower include strength, foolishness, wisdom, triumph, and forsaken love and romance.

Along with the columbine flower meaning symbolism, it also has many different uses. Since columbines require a rather high elevated level to grow, it’s quite easily propagated for thrill seekers who want to enjoy its beauty.

It makes a great addition to floral gardens and has many different things to be used for. A great example for the use of columbines is in wedding bouquets and flower arrangements. For most people, arranged cut flowers are the ideal gift or a beautiful gift that can be shared with loved ones.

Columbines also have interesting medicinal purposes. According to native Americans and Cherokee people, the columbine overcomes poison ivy pain by using the long taproots and seeds. These are historic traditions and have yet to be scientifically proven with evolutionary research.

But beware of consuming the flowers improperly because of the cardiogenic chemicals found within the roots. Consuming columbines even in small quantities for medical purposes can cause columbine poisoning, acute gastroenteritis, heart palpitations, and other adverse conditions that feel uncomfortable.

Surprisingly, the toxic seeds and young leaves have a unique use. The seeds when ground can be used as a natural remedy to treat head lice in adults and children. Young leaves of columbines can also be eaten fresh as a leafy green mixed with other leafy greens such as kale and sprouts. And if you harvest the flowers before the bees do, these taste exceedingly sweet and make an excellent garnish in salads or soups!