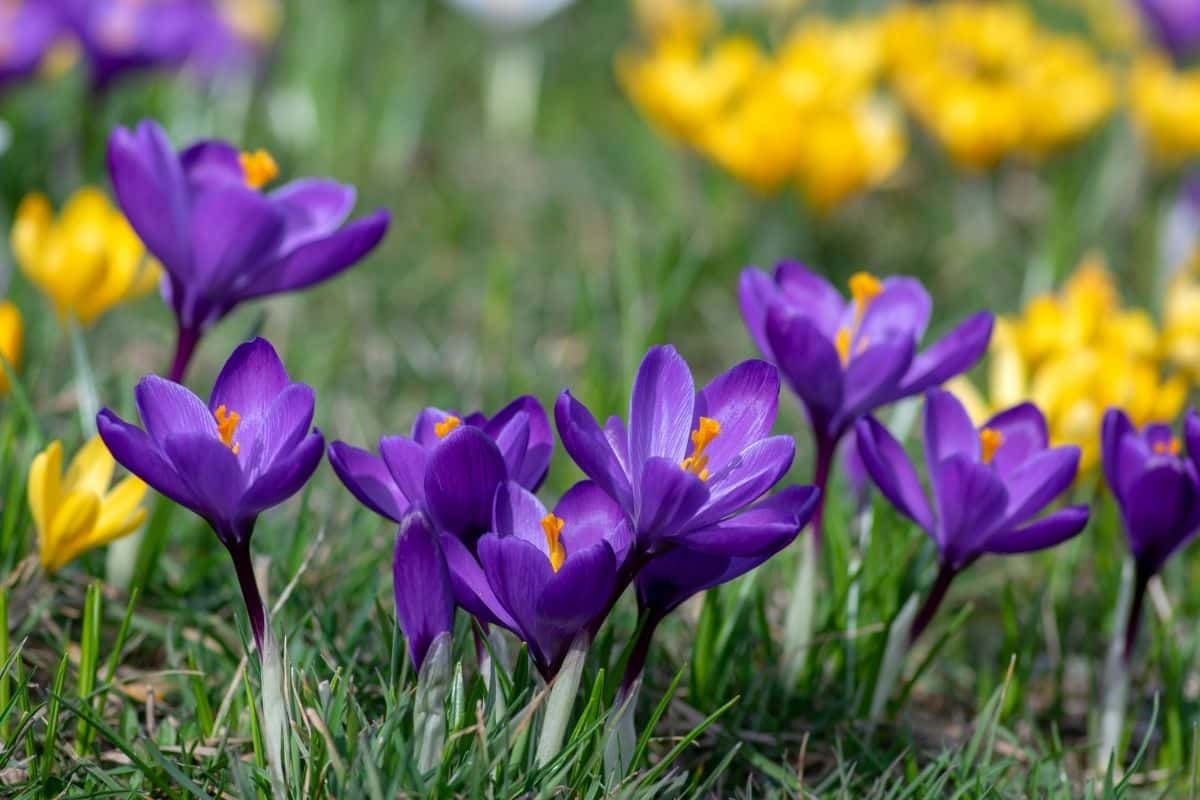 The Crocus flower is one like no other in the flora of this world! Its blossoms are as beautiful as they are fragrant. If you had no idea at all, a particular species of this flower is well known for being one of the most expensive spices on the market.

The crocus flowers actually produce the most expensive spice saffron. Saffron crocuses come in many different colors but only purple crocus produces the spice. With many different colors to choose from, each color of crocus flower meaning and symbolism is different. For example, a white crocus means honesty while a blue one means reminiscing the past. Meanwhile, other colors such as the yellow crocus represents joy while an orange one symbolizes warning.

Aside from being an ornamental flower, it is also a famous culinary gem. Did you know that the luxurious spice saffron comes from the stamen of these crocus flowers? Well, believe it or not but it does! Crocus is a Greek word meaning saffron which the Greeks used to flavor food and drink. The crocus species produce saffron from the flowers of the saffron crocus (Crocus sativus) that also means saffron yellow.

It is a perennial herb indigenous to Southern Europe and Central Europe as well as Southwest Asia. Croci or Crocuses, which are the plural forms of Crocus, were first discovered in the Bronze Age Minoan Crete culture dating back to 1,500 B.C. Women of this era wore the florets as hair trinkets and incorporated them in make-up for the dark red dye. Surprisingly, Egyptian artifacts also showcased the marvel of these flowers in 1,600 B.C!

Legends and folklore of this flower go as far and wide as the earth. It reaches the nations not only of the Greeks and Romans but also the Indians and Jews! Its history and etymological meaning may have come from many different cultures but it’s still a flower with great beauty.

Crocus is also known as the light bulb flower because of its close resemblance in shape. The floral name does not only take after the Greek word crocus but it also takes after the Latin word crocatus. Aside from its Latin origins, there are also many meanings and symbolisms that take after its history.

The crocus has its own symbolic meaning that dates back to early Greek and Roman eras. In general, the crocus flowers symbolize love and youthfulness. The language of flowers also says that the crocus flower symbolism is tied with many myths and folktales from ancient Greeks and Romans.

In ancient Greece, the symbolism of illicit love comes from the Greek legend about a young man named Crocus and his affection for Smilax, a beautiful shepherdess. As a greek noble youth, Crocus decided to have a discus game with Hermes which the gods forbid initially. During the games, it led to a tragic accident – poor Crocus killed.

In another Greek mythology, some say Crocus committed suicide instead because the gods forbade their love. The heart broken and distraught Smilax couldn’t hide his deep sorrow that he couldn’t stop crying. The goddess Flora turned Crocus into a beautiful flower as a sign of empathy. It was known as a tale of how they fell in love and an ending of a tragic love.

Aside from this story from the ancient Greeks, there are other symbolic Greek origins for the crocus flower aside from the legend crocus. There is a famous folklore that also tells a tale about the smitten beauty of Iphigenia that symbolizes the feminine beauty of the flower.

In Jewish traditions, the Song of Solomon sang high regards for the croci honoring it as the chief of all spices. Besides this, it is also believed to be dedicated to St. Valentine celebrating the symbol of spirituality.

The ancient Romans also used this blossom as an emblem of and potion for love. During the era of Nero in Rome, Crocuses are significant cordial tokens and tonics for the heart. The esteemed Roman writer Homer portrayed these flowers on the marriage bed of the King and Queen of heaven. It was believed to signify the glowing Crocuses that make the mountain gleam.

Contrary to symbolizing love and youthfulness, this blossom also signifies death. Historic Indian stories denote the saffron as a robe of death. Indian Rajahs would prefer to wear their saffron robes as a proclamation of death over the shame and dishonor of defeat during battle.

Crocus is lifted from the Latin adjective crocatus meaning saffron yellow. It is a perennial low-lying bulbous plant from the Iridaceae family. Also known as the Iris family, it includes over 75 species habitually blooming in the early season of Spring.

Most crocus varieties thrive in the Mediterranean area or the middle east and USDA zones 3-8. This beautiful flower blooms in the early spring and these first flowers only last for one season. It loves either full sun or partial shade areas with frequent slow release granules of fertilizer. Some crocus varieties are called the golden fiber because of the bright yellow anthers.

Generally, a crocus blossom bears the meaning of an end to financial hardships, eternal love, and new beginnings. With this many species come many colors. In fact, the crocus flower color meanings are quite interesting.

What Does a Purple Crocus Flower Mean?

In truth purple crocus appears as the most sought-after floral color for this plant. It symbolizes merriment, youthfulness, and hope.

What Does a Blue Crocus Blossom Symbolize?

Blue associates the feelings of being down or disheartened. Blue crocus flowers often relay a message of the best days being in the past.

What Does a White Crocus Flower Represent?

White Crocuses are believed to mirror the beauty of the lotus. It symbolizes a child’s purity and honesty which is taken from the story of the young boy Crocus!

In fact, a bouquet of white crocus flowers often sends the message of a heartfelt condolence for a grieving one or a humble approach towards a new friend.

What Does a Yellow Crocus Flower Signify?

Yellow crocuses embody cheerfulness and joy in life and love. A yellow crocus can also represent a success yellow for young ones.

What Does an Orange Crocus Bloom Mean?

Crocuses with orange flowers signify hardiness and the warning not to abuse someone or something.

What is the Cultural Significance of a Crocus Floret?

Many cultures adorn Crocuses for their vision and rarity. It is now widely accustomed across the planet for the cultivation of spice, pigment, and floral ornament.

Egyptians wreathed their wine chalices with croci for merry drinking and feasting and pigmented their robes for religious rights and practices. Romans also mimicked the adornment of the croci in their banquet halls and private residences.

In Korean customs, assigning a flower for every passing day of the year is done to give symbolic meanings to each month. In the case of the spring Crocus, the assigned date of the year is the 31st of January symbolizing the joy of youth!

What is the Biblical Meaning of a Crocus Blossom?

Crocuses embody the image of the Blessed Virgin Mary. The blossoms symbolize Her virginity and purity fitting for the blessed Mother of God.

What is the Spiritual Significance of a Crocus Flower?

Aside from biblical and cultural meanings, the crocus blossom also has a spiritual significance. The spiritual meaning behind this flower is its image of rebirth and the continuous cycle of life even after death. It is symbolic of new beginnings as its first flowers bloom in early spring.

Because of this, buddhist monks often colored their robes a crocus saffron yellow to symbolize humility and renunciation.

What Does a Crocus Floral Tattoo Mean?

Since it is commonly portrayed as a symbol of youthfulness, a Crocus tattoo signifies the brewing breeze of Spring. Therefore, croci tattoos represent one’s excitement and glee for a new season or chapter in life.

Use of Crocus Flowering Plants

The crocus flower saffron has many other uses aside from being an ornamental flower and a culinary gem. It is one of the first few flowers that bloom in spring hence why many brides accent this flower in wedding decorations and their wedding bouquets. It’s also an appropriate flower to give on Valentine’s day. Aside from being an ornamental, the deep red crocus earned its fame because of its cultivation of the spice saffron.

Not all crocus species or crocus varieties are cultivated for the saffron that season foods. These types of crocus flowers are used as medicine saffron wherein many sources claim its health benefits. Other sources say that this type of saffron can reduce swelling, kill cancer cells, and function as antioxidants that’s good for the immune system.

Other medicinal uses for this flower were for treating menstrual cramps of young girls. After many years of research, some scientists say that a few drops of saffron scent can indeed help treat PMS, dysmenorrhea, and even irregular menstruation.

Because of its beautiful and botanical characteristics, some even decorate their wine glasses with the crocus blossoms to indicate new beginnings in every toast.