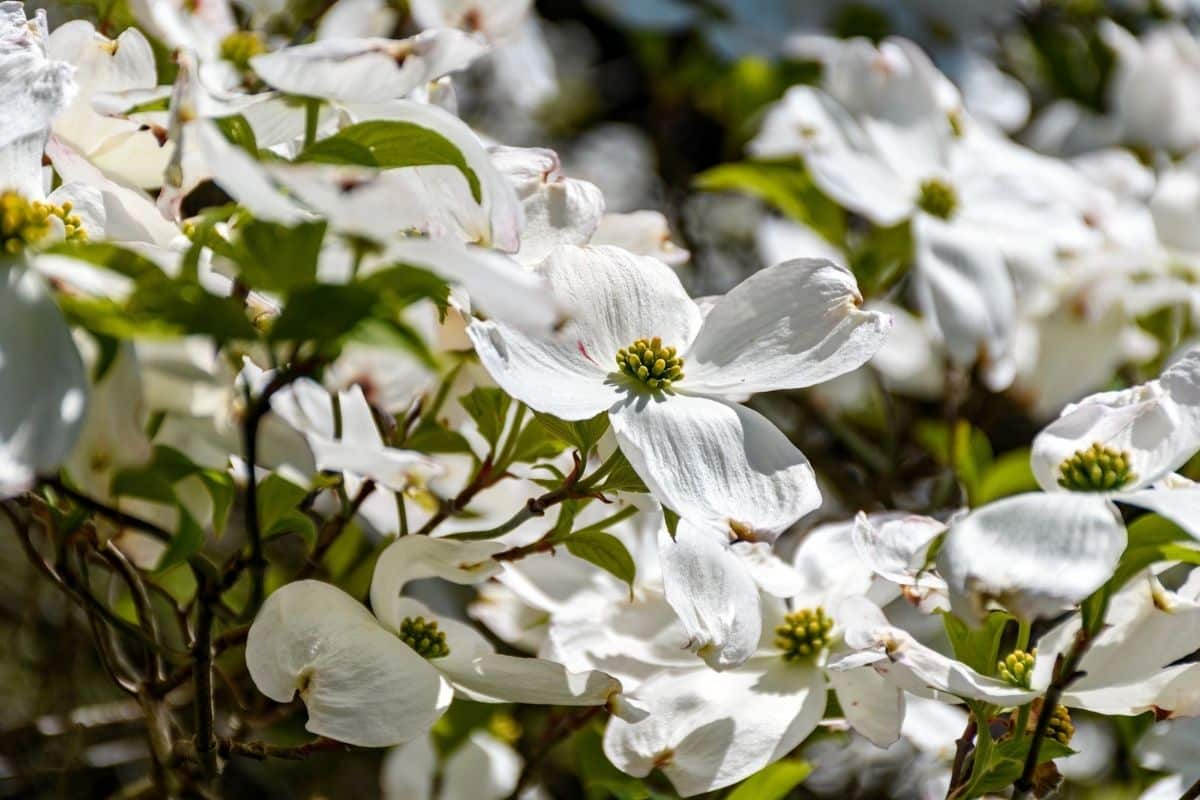 Dogwood sounds like a very uncommon yet intriguing name for a flower. Unlike other flora of the world, it doesn’t sound so appealing or attractive! But try not to be too hasty with judging its name because these flowers are in fact quite beautiful in bloom.

The most radiant beauty in Dogwood lays behind the meaning and symbolism the flowers have to offer. Weirdly enough, the name itself is already a clue to the mysteries behind the flower!

The infamous Dogwood tree was first described in 1598 as a small tree or shrub with a cluster of beautiful small flowers. The origin of such a peculiar floral name comes from a Scandinavian word dag meaning a skewer. Why a skewer? It’s because the hardwood from this plant was traditionally used to make dags or daggers!

Long before evolving into the name Dogwood, it was once called the Whippletree. If that doesn’t leave you even more curious, the Dogwoods can also be known as the Hound’s tree! Want to know why? Keep on reading to find out!

The flowers are from the genus Cornus of the Cornaceae or dogwood family. It is native in the regions of Europe, Eastern Asia, and North America.

In fact, the 30-60 flowering species of this genus come in three colors: white, pink, and red. Some of these species include the Pacific Dogwood (C. nuttallii), the Bunchberry (C. canadensis), the Cornelian Cherry (C. mas), and the Red Osier (C. sericea).

For its intriguingly odd name and simple flowers, the Hound’s tree has several interesting symbolic meanings.

For instance, the flowering Dogwoods (Cornus florida) have been the official floral emblem of the state of Virginia since 1918. Surprisingly, the state of and Missouri also honors these flowers as their state flora! These states in the United States are not the only ones giving this flower the honor it deserves. In fact, British Columbia honors the Pacific Dogwoods (C. nuttallii) as their official floral motif!

The very trendy Victorian language of flowers has a lot to say about the Dogwoods. They believe these flowers meant a love in adversity. Love is a powerful force so pure that they say it will overcome any high mountain or deep sea! This is precisely the reason why it is a great bouquet to give on anniversaries!

What does a White Dogwood Flower Mean?

The Cornus flowers were once said to be tall and mighty strong trees during the time of Christ. In this sense, its white flowers meant unwavering endurance and durability.

What does a Red Dogwood Blossom Symbolize?

These red blossoms are a symbol of passionate admiration and dedication. To top that off, this type of admiration is for the beauty and purity of your personality and social abilities!

What does a Pink Dogwood Floret Indicate?

A hearty pink Cornus flower sits very primly and proper on the lush green leaves of the tree. This sight to see indicates an attractive charm and graceful finesse.

What is the Biblical Meaning of Dogwood Blossoms?

In the Christian faith, the Hound’s tree and its flowers have long been associated with the Crucifixion of Christ. The tree itself is symbolic of Easter and is believed to be the wood used for Christ’s cross!

According to belief, what was once a majestic and tall tree suddenly turned into a short and twisted shrub after the Crucifixion. Blooming in groups of four, the petals also symbolized the cross and the nails pinned down on Christ.

Thinking about what could symbolize the crown of thorns? Take a look at the soft and yellow bud in the center. For many Christians, they say this represents just that! The fruit it bears also has a biblical meaning. The red berries upon the fruiting season represent the droplets of the blood of Jesus Christ. Each drop represented His pain and suffering upon the cross.

Alas, not all is in vain for the biblical meaning of the Dogwood trees. For what symbolizes the death of Christ on the cross actually also symbolizes the life-giving power of His blood. It is a reminder of the second coming of Christ and a new beginning in life.

What is the Spiritual Influence of Dogwood Flowers?

The floral essence of a Hound’s tree flower has an incantation for revitalizing receptivity to love. It is so often associated with the zodiac Virgo, the virgin.

This flora is believed to aid in guiding one towards a grace-filled physical movement towards a more etheric and harmonious life.

What are the Folktales Associated with Dogwood Florets?

Folktales have a lot of mystery behind them and the stories about Cornus flowers are surely just as peculiar! Many locals in Europe believe that the floral name came from a traditional brew made from the tree bark. Can you guess what the brew is for? Well, they say it was a bath wash for actual dogs covered in mange!

Another story says that carrying the bark around has magical use – a magical use to ward off and protect you from feral stray dogs or wolves! So if you’re thinking of going hiking, you might want to chip off a small bark from this tree for protection.

Like many flowers, the Hound’s tree flower is a storyteller of the season. Many say she is the indicator of frost. The saying goes that when the Cornus flowers bloom, the frost will no longer be here.

What does a Dogwood Floral Tattoo Symbolize?

Like many flowers and their meanings, the Dogwoods have a deep meaning when engraved as a tattoo design. Not many choose this flower for the name it rings. But in truth, this uniquely named blossom symbolizes steady resilience yet a beautiful simplicity.

There are several quite different uses for the Dogwoods as what you might think of most flowers. Besides being cherished as a beautiful ornamental shrub, it surprisingly has a lot of traditional uses in woodworks!

Did you know that the oldest discovery of a Dogwood woodwork was found on Ötzi – the 5,300 year-old mummy? He was found to be holding arrows skillfully made from Viburnum and Dogwood along with a yew bow and quiver. The traditional Europeans also made use of the species Cornus nuttallii to make spears and bows. Other woodworks these were made into include weaving machines, golf clubs, dagger knives, and jewelers’ benches.

Surprisingly, the red fruit of the Cornelian Cherry species are edible and famously crafted into preserved jams, desserts, and sweet sauces. Are you a fan of fruit liquor? Then the Cornelian Cherry’s fruits and flowers are the perfect choices to make into sweet liquor!

The Cornus bark and roots were also used as traditional medicine. Many folks practiced using the bark mainly for treating fevers before the discovery of quinine. The common Dogwood root and inner bark were used to treat muscle pains and cold-induced headaches.

Surprisingly, combining this with cherry and spice was also used as a mouthwash for sores. A word of warning that it’s a must to always consult a medical professional before using this plant or any part of it for medical purposes.