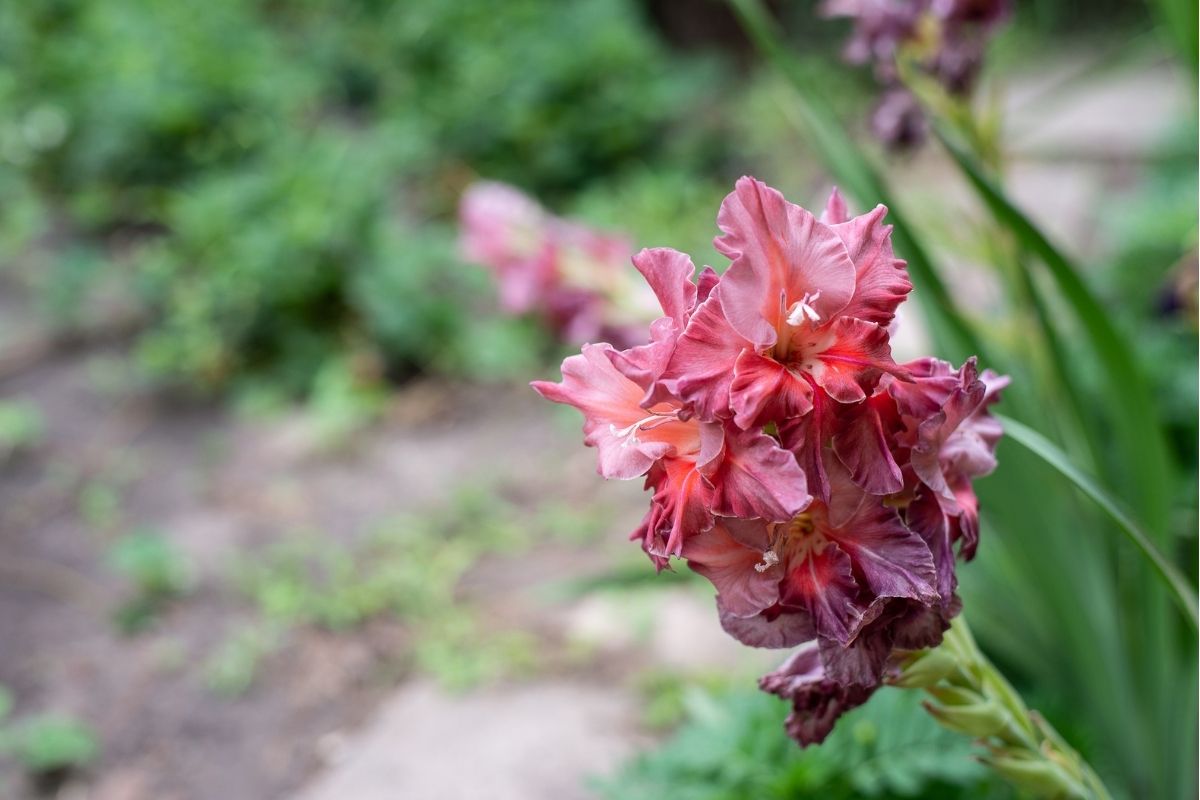 Tall, erect, and beautifully colored flowers are what make Gladioli stand out from a vast field of greens. It comes in various colors but only one distinct shape. Some say it resembles a spear, others may say it appears like a sword.

Whatever this flower may look like for many, the meaning and symbolism behind Gladiolus are for those brave of heart and steadfast in mind! It is a blossom fit for the mightiest fighters today.

The Gladiolus can be collectively referred to as Gladioluses or Gladioli. The flowers were first described in the 15th century as a plant with erect and sword-shaped leaves with spikes of colored irregular flowers. It is a perennial flowering plant native to Africa, Europe, and some parts of the Mediterranean.

The flower belongs to the genus Gladiolus of the Iridaceae or Iris family. There are over 300 strikingly beautiful species from this genus alone! Gladiolus derives from an Old English word gladdon or a Latin word gladius both meaning sword.

In today’s vast range of flowers, the Gladioli can also go by other interesting names. A few folks may come to know this distinct flower as the Gladiola or the Sword Lily. Other major species of these flowers are the White Marsh Afrikaner (G. tristis), Abyssinian Gladiola (G. callianthus murielae), and South African Gladiola (G. orchidiflorus).

If you use your wild sense of imagination, these blossoms symbolize a sharp blade specifically, that of a sword! Yes, you can say that its name literally translates to the sword, but its overall appearance is what gave this blossom its defined symbolism.

As this bloom symbolizes a sword, it also represents the gladiators of the Roman empire. It portrayed the remembrance and readiness of such warriors during their first and last battle and game.

Apart from this, did you know that these blossoms also symbolize infatuation, abundance, and generosity? The flora’s timeless beauty represents the bounty and beauty of all the good things that are yet to come!

Needless to say that if these blossoms symbolize a sword and a brave gladiator, then its floral meaning quite literally means that you pierce my heart and soul. Some would even say that flowers imply the meaning of strength of character and confidence when the need for such traits arises. But the most important message these flowers try to send is that for whatever life may throw at you, you should always be prepared!

What does a White Gladiolus Flower Mean?

White represents the attributes of sincerity and acts of pure goodness. Besides this, such flowers also send the meaning of sweet remembrance and blissful memories.

What does a Red Gladiolus Blossom Symbolize?

Red Sword Lilies are known as flowers for Gladiators who have fought with their lives. The red of these petals represents the blood spilled. Surprisingly, would you believe that these flowers also symbolize love at first sight? Well, they truly do!

What does a Pink Gladiolus Floret Indicate?

Pink blossoms are usually associated with women and their notable charm. Pink Gladiolas are no different! These flowers embody feminine beauty and grace. Aside from this, it also indicates one’s true admiration.

What does a Yellow Gladiolus Bloom Represent?

Being armed and ready is what yellow Sword Lily flowers represent! Aside from such warrior traits, it also denotes morality and dignity.

What does an Orange Gladiolus Flower Symbolize?

“Give me a break!” is the message orange Sword lily flowers send! Your deepest infatuations are also symbolized by such flowers when you give these to someone you admire!

What does a Purple Gladiolus Blossom Mean?

Purple gladiolus flower conveys the meaning of integrity and values. These flowers also portray a natural grace caught in between the middle of a garden.

What does a Green Gladiolus Floret Represent?

Green gladiolus flowers represent generosity and kindness. Very soft and velvety like the grass, it is also a reminder of serenity and harmony.

What is the Biblical Significance of Gladiolus Blooms?

In the Christian faith, the Gladioli was symbolic of a sword that pierced Mary’s heart during the Crucifixion of Christ. The flowers were also believed to symbolize the Holy Spirit which is the Divine word of God.

The faithful believe that these blooms grew abundantly in the Holy land and along the coast of Africa. It is said to be the flower representing Mother Mary’s months. The Gladiola honors Her many feasts such as Her Assumption, Birth, and Sorrow.

What is the Cultural Significance of Gladiolus Flowers?

In ancient China, the Sword Lilies are often used in special ceremonies. This isn’t the gleeful feasts you think of. Instead, these flowers are decorated in funerals and wake to help the souls of the dead to find their way to heaven.

What are the Folktales Associated with Gladiolus Blossoms?

The Cambridgeshire people have a very interesting tale about the Gladiolas. They believe that combining red and white flowers in one bouquet or vase is bad luck! It is a motif for being unlucky and a foretelling of sudden death! Whatever you do, make sure you try not to assemble red and white Gladioli flowers together!

What is the Spiritual Influence of Gladiolus Florets?

In the language of flowers, the Sword Lilies aid in developing and opening the body’s casual flow of chakra. These blooms promote a psychic spiritual connection between the mind and body. It helps form this connection by initiating and encouraging forward movement in the journey. Such spiritual influence actually brings more gladness and joy into everyday life. Once the foundation is reached, an increasing abundance of love and life are bound for you.

The fire burning within the soul is also influenced by the Gladiola. It raises the good vibrations all around helping clear the conscience in preparation for transition and transformation.

What does a Gladioli Floral Tattoo Symbolize?

The Gladioli are associated with the birth month flower of August. For daring people, this choice of tattoo design portrays exquisite style and serene grace. Most individuals who prefer this would fancy being seen as strong-willed and courageous.

The Gladiola is ideally an amazing cut flower and floral garden ornament. It is not a surprise that this is among the top eight world cut flowers in the floral trade industry! Looking back through time, such blossoms actually have a few claimed medicinal properties.

The Zulu and Sotho people also practice the traditional uses of this plant. Corms and flowers are a common staple food and medicine in their tribes. Fresh corms are boiled in water and consumed as a remedial drink for those who indulge way too much in alcohol!

Gladioli are said to have antibacterial properties. The people of Kwazulu-Natal in Africa create an infusion from its corms and lower leaves as a remedy for common coughs and colds. They also practice soaking the petals in water and are left to bask under the sun as a soothing wash for tired feet. A word of caution that it is a must to always consult a medical professional before using this plant or any part of it for medical purposes.