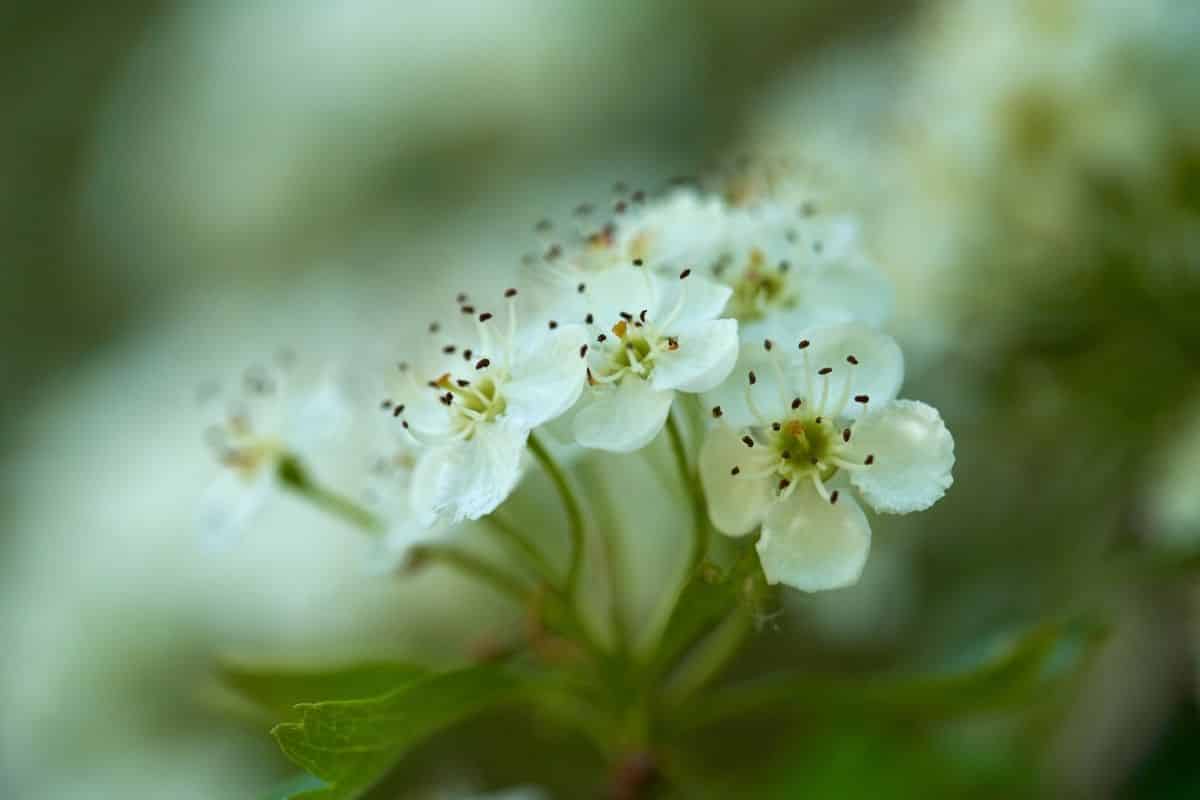 Hawthorn flowers are just as unique and beautiful as their floral name. It appears as a cluster of small dainty flowers on shrubs or small trees. Although it may not seem much, but up close and personal these flowers are very cute yet attractive.

Growing Hawthorns is not as popular as growing and arranging Roses. Related to the beauty and elegance of the Rose, Hawthorns also have very deep symbolic meanings and many tales to tell. The big difference of the Hawthorn from Roses is its cute little berries – which are just as sweet and delectable as rosehips!

Hawthorn is one of the oldest medicinal plants in Europe – tracing its roots back to the Middle century. The plant was first defined in the 12th century as thorny shrubs or small trees with attractive fragrant flowers and sweet fruits – almost similar to the definition of a Rose!

These spring-flowering plants are from the Crataegus genus of the Rosaceae or Rose family. There are about 280 species of Hawthorns and the majority of which are shrubs rather than trees. The floral name Hawthorn takes after an Old English word Hagathorn from Haga meaning hedge and thorn meaning thorn.

Crataegus plants are native to areas in the north temperate hemisphere. When these flowers first bloom in May, it signals the start of Summer. These flowers bloom with either white, pink, or red petals.

Since Hawthorns are surprisingly known as Maytrees, it is also popularly associated as the birth month flower of May – an indication that Summertime has come. In Pagan practices, such flowers during the Summer symbolized new life.

Hawthorns were symbolic of destructive spells or enchantments. In the county of Devon, Crataegus flowers were an unlucky symbol. Many folks believe that if you walked past under the tree, fairies would have cast a spell or enchantment on you without your knowledge!

The flowers were also symbols of female sexuality. In Athens, women have passed down traditions about the purpose of Hawthorns in weddings. Brides traditionally ornamented fresh Maytree flowers on their partners during the wedding to symbolize hope and new beginnings. As per tradition, they would also carry a bouquet of Maytree flowers as they walk down the aisle.

Maytree flowers in Missouri have also been the official state flower since 1923.

The meaning and symbolism behind Crataegus flowers are honestly so similar that there are just a few points that differ. In the language of flowers, Hawthorns held a deep divine meaning especially with the spirituality of life.

In other cases such as the beliefs of Devon folk, Maytrees flowers meant witchcraft and warned caution.

These flowers also meant other ideas such as welcome because it blooms at the start of Summer. Sometimes, these would also mean hostility and harshness – depending on the situation of course!

What does a White Hawthorn Flower Mean?

White Maytree flowers appear very delicate and charming as they bloom during the Summer. Such flowers often represent the idea of chastity and fertility. Oftentimes, such beauties in bloom also interpret the continuity of life.

What does a Pink Hawthorn Blossom Symbolize?

Crataegus flowers with pink petals also look like a cluster of beautiful cherry blossoms from Japan. These kinds of flowers are a beacon of hope when they first bloom. As many confident folks will say, where hope is alive, happiness will prevail.

What does a Red Hawthorn Bloom Indicate?

Red Hawthorns are the most uncommon floral colors amongst the species. It is a flower that indicates magic and the ability to banish anger or stress. Like that of Athenian customs, red Maytree flowers symbolize the harmonic union of very opposite people.

What is the Cultural Significance of a Hawthorn Floret?

The cultural significance of Maytree flowers is taken from Hymen – the Greek god of marriage.

This significance leads to the customs and traditions of Athenian folks at weddings. At the altar, the god was said to be holding a torch made from the wood of the Hawthorn tree. The torch was also believed to light the chambers of the nuptial cave – or in modern-day history, the church!

Many European weddings now practice such tradition believing it was promising and could be a blessing from the god of marriage.

Ancient Greeks also believe that the flowers were a symbol of a lovely betrothal. Freshly picked Maytree blossoms were said to not only be carried by brides in bouquets but also by the guests to wish the couple a fruitful and long marriage.

Meanwhile, the early Romans have a different traditional belief for such blossoms. They believed it was a charm against sorcery, placing the leaves on cradles of newborn babies to ward off evil fairies and witches.

What is the Biblical Meaning of a Hawthorn Blossom?

In the Christian faith, there is a religious legend about the symbolism of the Hawthorns before Christ. According to the tale, Joseph of Arimathea traveled to Great Britain to spread the message and teachings of Christ.

Weary from his travel and task, he awoke one day to find his staff had taken root on the ground. After some time, the plant grew and bloomed into a magnificent Hawthorn tree. It was said to only have bloomed during Christmas and at the end of Spring or the beginning of Summer – symbolizing the birth and rebirth after the death of Christ.

What is the Spiritual Influence of a Hawthorn Flower?

The spiritual influence of Maytree flowers has a very strong impact on spiritual energy and chakra. It most especially has a strong affinity for engaging with emotions, journeys, and relationships.

These flowers are a great companion during times of discovery. Its floral presence alone will clarify what path to choose between challenges – either the positive or difficult way of dealing with things. More often than not, it will encourage the surge of energy needed to rise to the test.

When it comes to emotional baggage, a Maytree essence can help clear your mind of questioning your worthiness. The soothing sight of these flowers will make sure you don’t doubt your success or wallow in your failure.

After providing guidance on the journey, the flowers would have changed you into a real, more honorable, and capable individual. And at that – the mind, and soul are ready to show the truth of the heart.

What are the Folktales Associated with a Hawthorn Bloom?

There are quite a few interesting tales to tell about Crataegus flowers. Hawthorns are said to be the birth month flowers of May because of an old Arthurian myth. In the story, Queen Guinevere rode out during May Day every year to collect white Hawthorn flowers as a symbol of protection to guard against witches.

In Serbian and Croatian folklore, stakes made from Hawthorn wood were used to stake vampires and other evil creatures. A similar Gaelic folklore also talks about its affinity for the world of magic. These folks believe that a Maytree was symbolic of the entrance to the underworld and were strongly attached to fairies.

More traditional tales speak of the charm such flowers have. Early farmers believe in the good luck Crataegus blossoms hold. They would practice hanging twigs or flowers outside cowsheds because they believe it could help produce more cow milk!

What does a Hawthorn Floral Tattoo Symbolize?

Just like the Rose, Maytree floral tattoos symbolize deep affections and pure love. It is a symbol of the hope that prevailed and guided you during your journey of discovery.

It has a strong affinity for spiritual well-being and will ultimately represent your pure and genuine happiness.

Crataegus plants are widely cultivated as ornamental flowering plants for their flowers and fruits. It is used in a wide array of products such as food, woodwork, and medicine. The most commonly used parts of the plant include the flowers, the fruits, and the leaves.

Maytree flowers are most popularly used in bridal bouquets and wedding garlands – given the tales and symbolism behind them. It is added as a small filler in most bouquets or vase arrangements that symbolize hope and protection.

The flowers and berries are also popular food additives in candied fruit slices, jam, and wine. It is also sometimes infused as a tea with sage to help ease menstruation cramps and pains of menopause.

There are two medical species used for folkloric medicine. These include the Crataegus oxycantha and the Crataegus monogyna. It had antispasmodic and sedative properties which helped normalize blood pressure by regulating heart action.

The leaves, flowers, and fruits were mainly used to treat circulatory and heart problems such as angina and coronary disease.