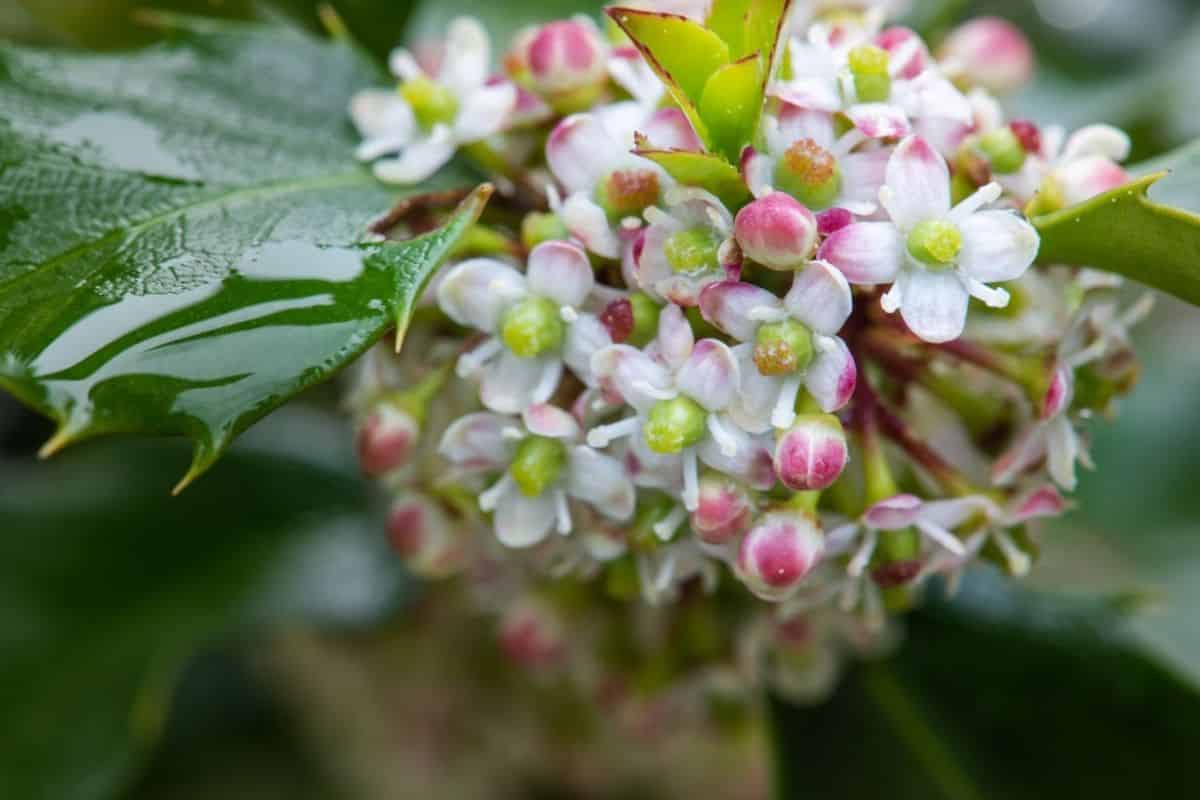 Holy moly! Better not mistake this flower for the famous mistletoe! It may look surprisingly alike but the distinction between these bright berried plants lies between the leaves.

This plant and its berries are popular during the Yuletide season for reasons real jolly!

Hollies belonging to the genus Ilex has over 600 species. The most common species known in the genus is the Ilex aquifolium. Taxonomic origins of this plant hail from the Aquifoliaceae family. It was first described in written works in the early 12th century.

These flowers originate from North and Central America and diversify into other temperate regions of the globe except Australia and Africa. This alone indicates that these plants love the cold!

Hollies are known to withstand extreme cold weather and thrive after the passing of the season. Did you know that only female Holly trees or shrubs have berries? If you ever come across one without those dazzling red berry fruits, then it’s most likely a male plant! The flowering and fruiting seasons are best enjoyed during the spring.

The Yuletide season is best associated with Hollies. Agrarian and Pagan rituals also praise this plant as the winter king for its ability to thrive during the cold season. The king in this sense may also refer to the later crucified Christ the King.

For the ancient Romans during the late days of December, branches and twigs of Hollies are presented as gifts or tokens of gratitude upon friends and family for goodwill and bounty. They also used Hollies as offerings during the festival Saturnalia for the god Saturn.

Word also has it that homes decorated in hollies fused with common ivies bring about peace and passionate bonds to couples in their homes. Druids from ancient Britain and France also embodied the flower as a symbolism of protection. They crowned their heads with their twigs before entering forests as a sign of defense and safety.

The Holly actually derives from Middle and Old English, Old German, and Middle Irish words and translates to holy.

Mostly sought-after for its bright-colored berry fruits rather than the flowers, the Holly indicates several distinct meanings. It signifies a courageous and brave perspective and attitude towards life. Contrary to this, the flowers also denote caution and alertness for the challenges up ahead.

Other general meanings linked to Hollies include divine connection and sacred space when planted in gardens or yards.

What Does a White Holly Floret Mean?

White hollies are regarded as the purest and most beautiful. Blossoms of this color allow the berries to stand out in the entire plant. Simple stunning! This floral color is believed to bring about good fortune and holiness.

What Does a Pink Holly Flower Symbolize?

Holly flowers in shades of pink symbolize enchantment and beauty!

What Does a Yellow Holly Blossom Signify?

Yellow hollies offer as the beacons of happiness and persistence in life and love.

What Does a Green Holly Bloom Represent?

Although an odd color for a flower, green Hollies imply the wishes for protection and gifts of foresight.

What is the Biblical Significance of the Hollies?

The Hollies are a well-known symbol of the persecution and resurrection of Christ. The only Son of God was sacrificed and adorned with a crown of thorns, a holly wreath, and white petalled flowers. Therefore, the holly wreath signifies the drops of His blood and the flowers as His purity and holiness.

What are the Cultural Mythologies Associated with Holly Blossoms?

Numerous cultural mythologies and folklores are bound to the Holly plant. Celtic mythology believed that it represents the Holly King who ruled from summer to winter and was later defeated by the Oak King and ruled from spring until autumn. For the Celts, the Holly was a symbol of a persecuted King.

Europeans also offer their own version of myths about the Hollies. It was believed that the Holly represents the gods of thunder Thor and Tanarus. Locals in the area would plant Hollies around their home as a barrier from the rage of lightning during storms caused by angered gods.

What is the Symbolism of Holly Flowers During the Christmas Season?

Meanwhile, the Christians believe that the Hollies symbolize Christmas joy and represent it as the flower of December. This belief is traditionally seen on decors or wreaths and even Christmas cards and trees in homes and churches!

What is the Meaning of a Holly Floral Tattoo?

A Holly floral tattoo could indicate several meanings. Aside from the interpretations and symbolisms mentioned above, these body art designs embody happiness and self-growth. This motif would be a great addition to your body art if you were to represent protection and bravery.