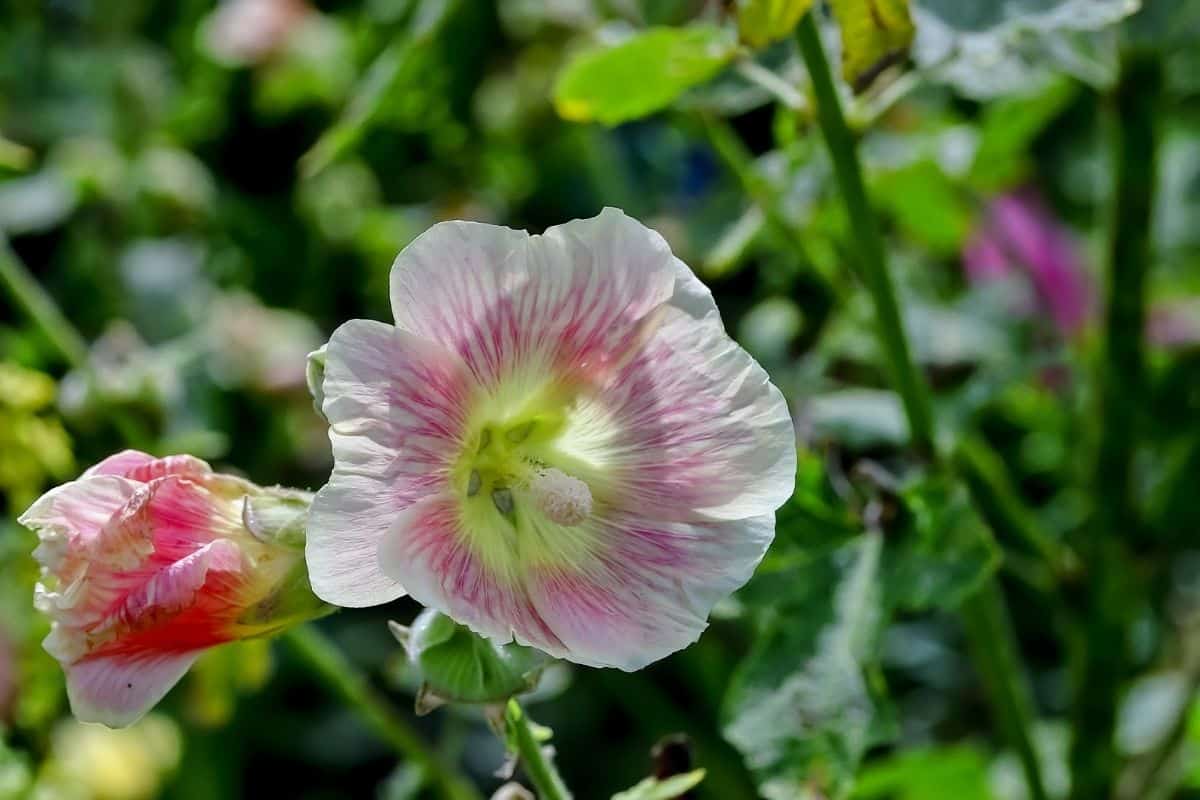 You might just go “Holy heck!” while reading about these hollyhocks! Did you know that these are one of the many rare plants with almost black-colored flowers?

You read that right! Black flowers! Although it only appears to be black due to the light’s shining effect, in truth it is actually a very, very deep shade of maroon.

Hollyhocks, scientifically known as Alcea rosea stem from one of the 60 species of the Alcea genus. It is a part of the Malvaceae or mallow family popularly known for the hibiscus flowers.

Native to European and Asian regions, it is considered an invasive species due to its hasty proliferation in an area. It grows around mountains and hillsides in almost any kind of environment. This is why it is a great addition to gardens and yards!

The first known use of this floral name came about in 1584 and is now botanically known as an herbaceous plant. Before the name came about, it was referred to as the Holyoke in the early 1400s. In the present day, it is now simply called the mallow blossoms.

Oddly enough, hollyhocks are the most typical flowers associated with fertility. In fact, it is popular to adorn bouquets for the 13th wedding anniversaries! Ancient times described hollyhocks as powerhouses from a mystical perspective. Cool, right?

According to spiritual medicines, it is awe-inspiring in therapeutic counseling and energy healing. Historical beliefs also consider this blossom as an embodiment of the mitigation of broken or in-war lands. It also aids in realigning a nation’s rich cultural heritage.

The floral name is believed to derive from the Middle and Old English ages. It was taken from the word holihoc which can translate into two meanings. One can mean marshmallow in the Middle age while the other means holy mallow in Old age English.

These plants are either annual or biennial in nature and could produce an incredible amount of seeds within each season!

What Does a White Hollyhock Flower Mean?

White is the color of purity and innocence. In the language of floras, white hollyhocks epitomize a woman’s pure intentions and wholesome ambitions. Both are a bounty in number and a sure sight of female determination

What Does a Red Hollyhock Floret Symbolize?

Red hollyhocks embody the devotion to love and passion of a woman to her offspring or significant other.

What Does a Pink Hollyhock Blossom Represent?

Pink is commonly attributed as a color of the female gender. It signifies the strengths and beauty of a woman inside and out.

What Does a Purple Hollyhock Bloom Signify?

Purple or deep violet hollyhock blooms usually denote the nobility and integrity of an individual in life or in oneself.

What Does a Yellow or an Orange Hollyhock Flower Mean?

Hollyhocks in hues of yellow or light orange offer a sense of self-recovery and reconnection after stumbling upon struggles and challenges in life.

What Does a Black Hollyhock Blossom Symbolize?

What is the Cultural Significance of Hollyhocks?

Chinese culture includes an in-depth significance for the Hollyhock flowers. It originates from China and symbolizes nature and fertility in ancient Chinese lore with its beliefs of possessing healing abilities.

It was famously used as a flavoring and medicinal herb during the early eras. Hollyhock leaves were cultivated for the savory taste of their leaves in dishes. In addition to its culinary use, it is also an excellent treatment for diseases, wounds, and bites from snakes and scorpions.

What Do Hollyhocks Symbolize in Japan?

The Japanese are one to include such rich and ancient culture and heritage in their history. All things in life are deemed sacred and worthy of honor for this race and are esteemed with the utmost respect and well-kept traditions.

The Hollyhocks are known as one of the esteemed emblems in Japan. In Japanese, it is referred to as the Aoi that has a traditional festival celebrated every May 15th in Kyoto. Legend has it that these festivals exorcise one’s sins and the dangerous elements while lifting praises to the gods. The chief priest of the town also performs a ritual of kneeling on the stone during the entire ceremony to receive a blessing from the heavens.

It was used as the motif on the Tokugawa family crest that signifies their nobility and high status in life. Ieyasu Tokugawa was honored as the first shogun during the era of Edo. This motif was then adorned on kimonos, lanterns, and lacquerwares as a method of preserving the history of the plant. This symbolism has given the Hollyhock the honor and superiority comparable to the chrysanthemum and paulownia of the Japanese emperors.

Although the flowers are not the engraved motif on the crest, its three palmate leaves compose the motif instead. The leaves were believed to symbolize loyalty and obedience. The leaves have a habit of bowing down when the sun rises which is how an apprentice bows down to their master.

What Does a Hollyhock Floral Tattoo Mean?

Numerous meanings behold the design of a Hollyhock tattoo. A black hollyhock floral tattoo is the most chosen design in this form of art. For women, it signifies one’s ambitions and fruitfulness. It can also interpret the ease of self creativity and liberality.

Up next: How to grow hollyhocks