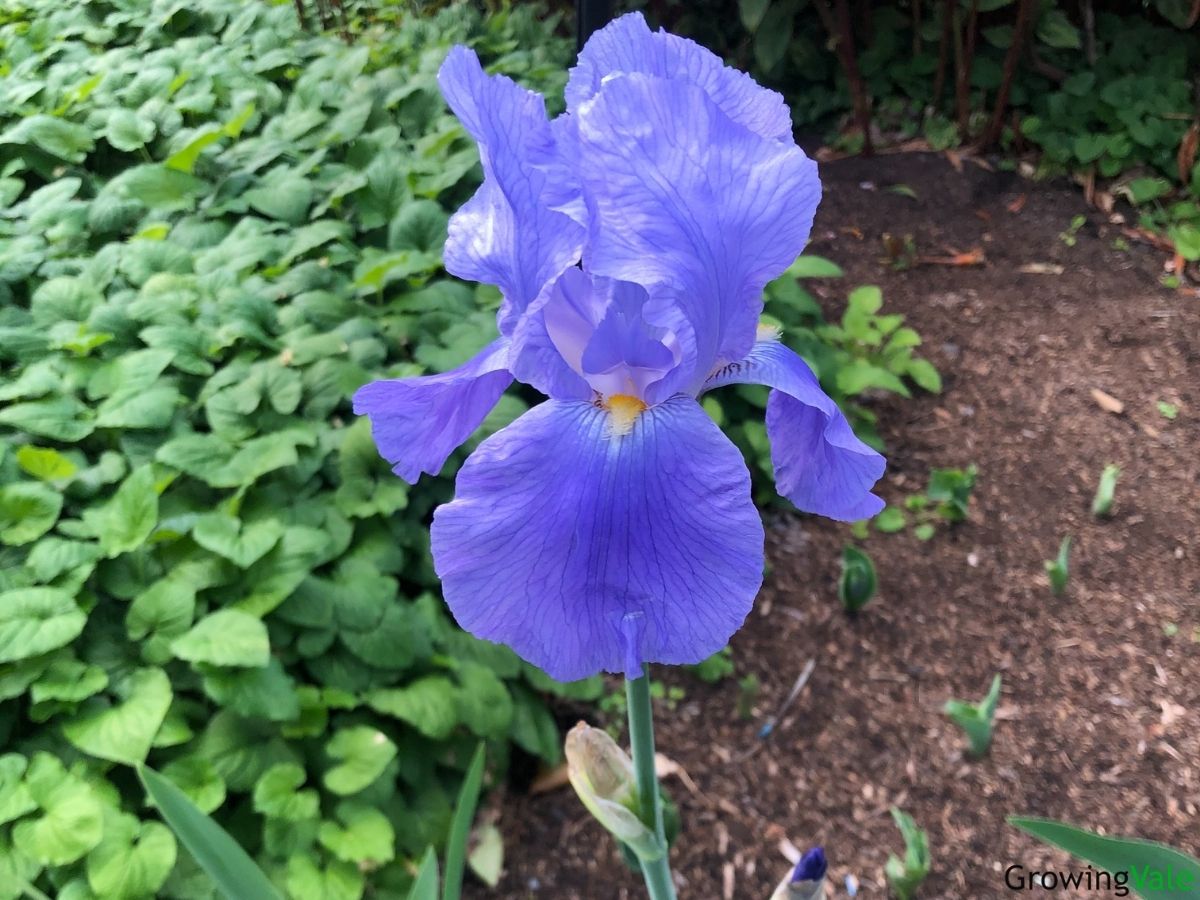 An Iris can mean two things – a delicate part of a living thing’s eyes or a beautiful flower. In this case, it is all about the meaning and symbolism of the floral Irises! You can probably say that what is hidden behind its beauty is something as close to the wonders of the rainbow. Its history is also filled with so much fascination that it will be a must-have addition to your floral garden!

The Irises have something quite similar to the Lilies and if you’d like to find out just what that is – well, keep on reading to find it out!

The history of floral Irises can be traced back to the 15th century wherein it was first defined. Irises are bulbous perennial plants with basal-shaped leaves and large showy flowers. Quite interestingly, this very flower is where the famous scent of the Violet-like perfume comes from!

The Iris is a part of the genus Iris of the same name Iris or Iridaceae family. There are about 300 species from the genus of this family but the range of colors can go from light white to a very deep blue! Regarding the origin of the genus and floral name – you’ll just have to keep on reading to find out!

The diversity of the Irises is quite vast. Most of the floral species are centered in the north temperate part of the zone although some can also be found in the Mediterranean and Central Asian regions.

With the several species of Irises available – some are favored for breeding new varieties while others are selected for their sweet fragrance. Such species include the Pale Blue Irises (I. pallida), the Yellow Irises (I. variegata), the Japanese Water Irises (I. ensata), and the Siberian Irises (I. sibirica).

Since the early 5th century, an Iris was always believed to symbolize divine protection and royalty all over the globe. The very three tips of the flowers symbolize faith, wisdom, and valor!

France has been very popular as the world’s country of love. But a certain province in Italy also honors this flower as a royal floral emblem – that place is none other than Florence! King Louis of France designated the Florence Lily specifically for this emblem! Surprisingly, these blossoms are also called the fleur-de-lis – just like the Lilies!

Additionally, the French also believe this flower was a symbol of Gaul in the early 1st century!

In the rich traditions of Japan, the Irises is included as one of the nation’s national flowers – probably somewhere alongside the ever-so-famous Cherry Blossoms!

The Chinese have also regarded an Iris as a symbol of grace, affection, and solitude in beauty.

Meanwhile, some say that a clumped bunch of Irises symbolizes the good traits of sympathy, good communication, and an innate ability to evoke positive moods!

Here it is – the true and very hidden meaning of Irises And no, it still doesn’t mean a part of a living eye (although not in the floral context). The true meaning of an Iris lies after the soft putter of the rain. And what comes after the rain? A rainbow.

This flower literally stands for the Greek goddess of the rainbow and the messenger of the gods – Iris.

Another special meaning this flower has is the promise of love and a very meaningful friendship!

What does a White Iris Flower Mean?

White Irises have a very in-depth meaning. The full bloom of this spectacular flower implies purity and divinity.

What does a Blue Iris Blossom Symbolize?

A vast field of blue Irises is just as calming as the blue sea. It is symbolic of strong faith, hope, and health!

What does a Red Iris Floret Indicate?

A red Iris is just as daring as its color. This flower indicates a flaming manner of speaking and writing – a burning passion for self-expression!

What does a Pink Iris Bloom Represent?

Irises with pretty pink petals represent a rare feminine beauty and heartfelt compliments full of compassion and admiration! It also stands for empathy and deep appreciation.

What does a Purple Iris Flower Symbolize?

The kind of flowers you need to symbolize sensible wisdom and esteemed royalty is none other than the purple Irises! Such flowers are also symbolic of ambitions.

What does a Yellow Iris Blossom Mean?

If you’re thinking of a flower that speaks pure enthusiasm and untainted determination – a yellow Iris can mean just that!

What does an Orange Iris Floret Represent?

The luminous glow of an orange Iris flower represents a bright light and goodwill power to govern and lead! Also, it is a representation of socially inviting friendliness.

What does a Black (or Brown) Iris Bloom Indicate?

A very uncommon color for a flower but this interestingly indicates great comfort and protection from emotional stress. It also offers good common sense and well-groundedness.

What is the Cultural Significance of an Iris Bloom?

There is a very diverse cultural impact that Irises have around the world. A traditional custom in Japan involved hanging Iris roots on the eaves of homes. The Japanese believe this was a guardian and protector of the house against unwanted evil spirits.

Additionally, this flower was commonly used in many Japanese betrothals and spiritual purification ceremonies.

Ancient Egypt also had accustomed the flowers on the figures of the Sphinx. It was a symbol of power and ever-knowing knowledge and is often placed on the brow of the ancient creature. For the early Egyptians, this was also adorned on the scepters of historic kings and rulers to symbolize their faith, wisdom, and valor.

What is the Biblical Meaning of an Iris Flower?

An Iris has a very deep religious meaning. It was considered by many Christian believers to be a symbol of the Holy Trinity. The flower’s three buds and petals motif is a symbolic image of religious faith and wisdom.

The flower is also attributed to the Immaculate Conception of the Virgin Mary and her sorrow during the Passion of Christ.

What is the Spiritual Influence of an Iris Blossom?

The essence of an Iris blossom has a very powerful influence in many forms. Its mere presence can uplift energy and balance in the atmosphere. While bestowing radiance and inspiring vision, these flowers transform the dullness of things into great revelation.

An Iris presence activates a deep chakra to promote cleansing and flow of synchronicity in daily life. It also brings forth and encourages all forms of inspirational creativity.

What is the Folktale Associated with an Iris Floret?

There are quite a few tales and myths known about the Irises. One tale says that if you place a vase of these fresh cut flowers in a room full of gloom – it will almost instantly cleanse the negative energy present!

Another story says that business earning and good sales will increase if you keep a small piece of the plant root in the cash register!

Now here comes the tale about the Greek goddess Iris. According to mythology, the goddess Iris was not only the messenger of the gods – but it was also her duty to guide the souls of dead women through the Elysian fields!

Because of this myth, the Greeks planted the flowers on graves to help these women have a guide in the afterlife!

What does an Iris Floral Tattoo Symbolize?

An Iris floral tattoo can symbolize a few key traits. For one, it is an image of protection and at the same time power – this could mean you are a strong person with a few very cautious practices! This tattoo can also cleanliness or purity of the heart, mind, and soul. Most importantly, it is an art beacon for hope.

This flower is very much prized for its beauty in outdoor gardens and indoor ornamental decorations. Thinking of sharing this beautiful flower? You may also opt to gift them as an arranged bouquet or in a vase!

It was mentioned earlier that this particular flower was the source of a Violet-like fragrance. When the fresh roots of German Iris are cut and peeled, it produces the orris root which just so happens to be the source of the fragrance!

This very root is also an additive in numerous cough remedies and teas. Other products such as liquors, toothpaste, and tooth powder are flavored with this root! It was most famously used before by children and were told to chew on it when new teeth began to grow!