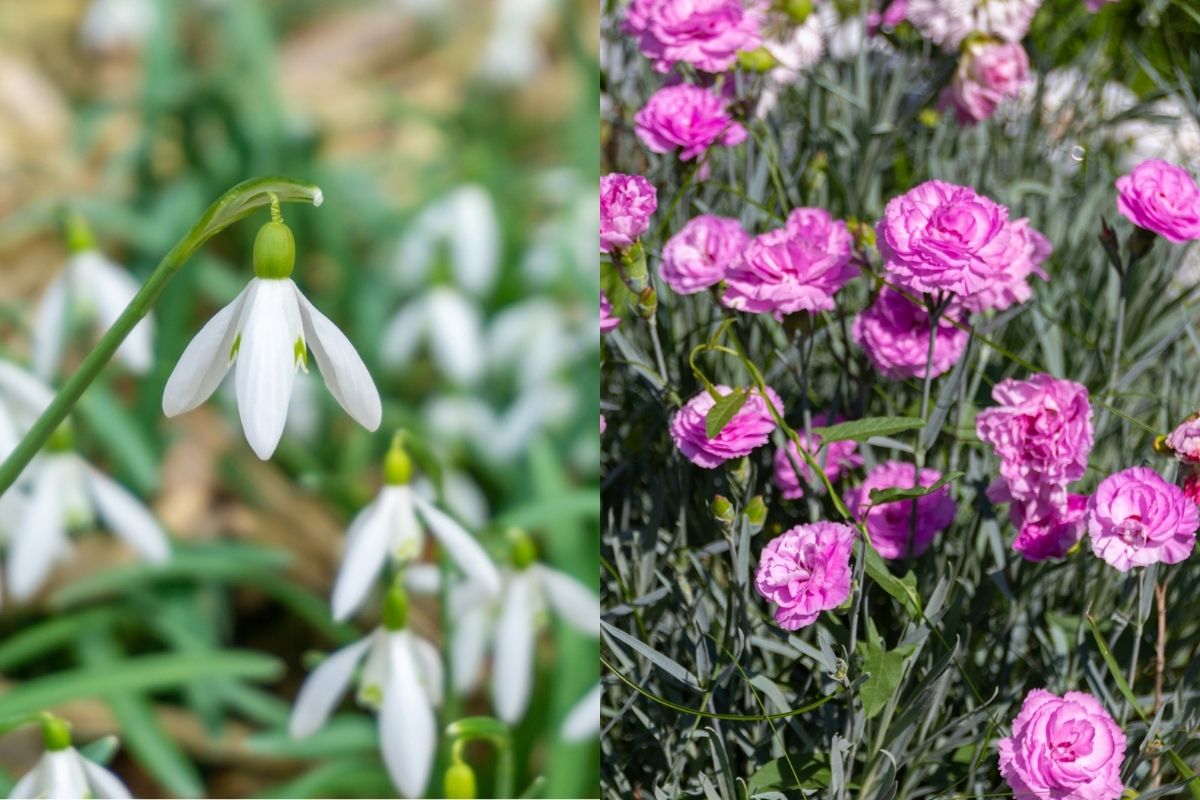 Even in the dark cold winter months or northern temperate climates, the lovely birth flowers for January, carnations (Dianthus caryophyllus) and snowdrops (Galanthus nivalis), provide a bright and cheery reminder of the new beginnings and opportunities for love and happiness in the new year.

Beyond reminding us of the prospect of change and growth, these January flowers of the month have historical meaning and symbolism that ties back to those born in the first month of the year.

Found in almost every corner of the world, carnations are double-blossomed with long stems and single flowers with fringed petals. These herbaceous birth flowers are sometimes called clove pink, grenadine, or gillyflowers. Having been cultivated for over 2000 years, they are one of the oldest types of cultivated flowers in the world.

Although carnations come in many different colors, ranging from white to red to purple to orange, pink is believed to be the original color. In fact, it is thought that the scientific name caryophyllus stems from the Latin word “carnis”, meaning flesh or flesh-colored or “incarnacyon” (incarnation), referring to the incarnation of a god in flesh.

The Latin epithet for carnations, dianthus, originates from the Greek words “dios” meaning Zeus or god, and “anthus” meaning flower which suggests this biannual birth flower was once considered a flower of the gods.

Beyond their attractive flowerheads often used in religious ceremonies, carnations have also long been prized for their intoxicating aroma – something that has made them popular flowers for use when dating.

What Do Carnations Symbolize?

Here’s what to know about carnation symbolism:

With their long history of cultivation, carnations now come in a plethora of intriguing colors and textures – each representing a unique value or virtue.

During Victorian times, carnations were even used to share secret messages. These hidden meanings continue to evolve and this January birth flower now signifies many different feelings and thoughts, although love is always at the heart of the symbolic meaning of carnations.

When carnations are pink, this signifies love for one’s family – particularly love for one’s parents. This relationship ties back to the etymological meaning of carnations where they are believed to represent the journey between different earthly lifetimes.

When carnations are deep red, they represent a love that is deep and true. Lighter shades of red in this January birth flower represent deep friendships and companionship. As is the case with other white flowers, white carnations represent purity and innocence.

First classified as a flower in 1753 by the Swedish botanist Carl Linnaeus, snowdrops (Galanthus nivalis) is low-growing (3”/7.5cm-4”/10cm) herbaceous perennial native to Europe and southeast Asia. However, the plant is now found throughout temperate climates in the northern hemisphere, thanks to its ability to easily naturalize once escaping from gardens.

Snowdrops’ genus Galanthus stems from the Greek words “gala” meaning milk, and “anthus’‘, meaning flower. The Latin epithet nivalis means snow. Thus, snowdrops are milk flowers that grow in the snow. While being a wonderful description for these January birth flowers, the German word for snowdrops is Schneeglöckchen. This translates to little snowbells – a perfect description of the white, bell-shaped blossoms on this birth flower.

Despite having white blossoms as its namesake characteristic, this January birth flower can now also be found in blue, pink, purple, or even yellow. These are adaptations to both grower preferences and their spread to different geographic regions.

What Do Snowdrops Symbolize?

Here’s what to know about snowdrop symbolism:

Once thought to be a sign of bad luck or even death because they were often found in and around cemeteries, modern botanists have enabled a better understanding of these tiny winter wonders.

Now, when snowdrops break through the snow in the cold winter month of January, they symbolize the beginning of the new year. With the new year comes the opportunity for a fresh start and their snow-white petals embody the purity, rebirth, and innocence of new beginnings. Their historical relationship with death and loss has also evolved to symbolize consolation and sympathy.

As the coloring of the snowdrop has evolved to be more than just white, the symbolic meaning of this January flower has also evolved. When these dainty birth flowers are pink, they embody kind-heartedness and the spread of goodwill. Pink snowdrops are also a symbol of a true friendship.

Purple snowdrop flowers represent the pure beauty of first love. The purple variety of snowdrops also signifies consolation and empathy. However, if a snowdrop has blue blossoms, it mirrors the frozen winter environment where it thrives. It is then that these birth flowers represent chastity and death.

Seeing a bright and joyful yellow snowdrop in the birth month of January is a sign of happy luck and merry times ahead.