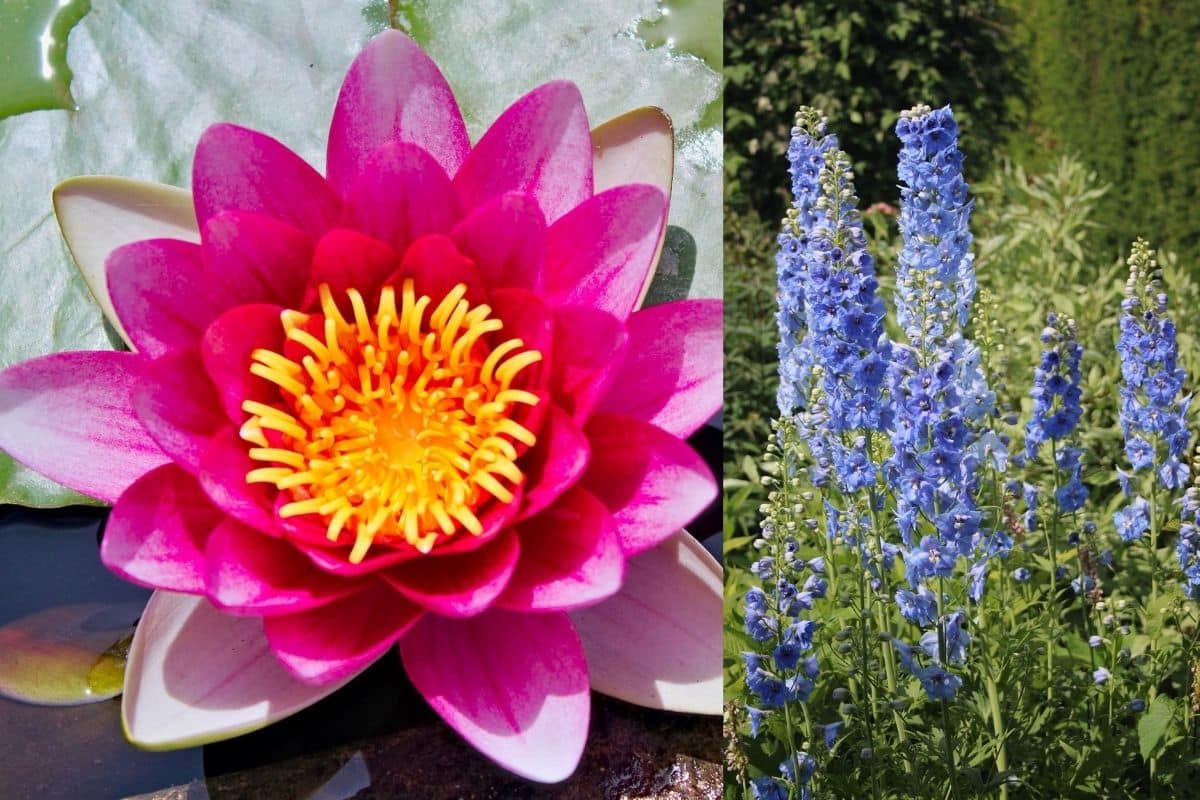 Another year goes by and you realize it is finally July – a very special month full of celebration and in some countries, their day of independence. July is known as the seventh month of the year and is named after the great Roman dictator – Julius Caesar.

Julius Caesar was a very famous Roman dictator during the time before Christ. The month of July was previously called Quintilis and always had 31 days. In 46 B.C – a few years before the assassination of Caesar, he changed the name month’s name Quintilis to July to honor and glorify himself!

The birth month flowers for the days of July are the Delphinium and Water Lily. Aside from these flowers trending during July, it is important to remember that several countries also celebrate their Independence Day. These countries include the famous Fourth of July for the United States, Peru, Puerto Rico, and Colombia.

Delphiniums are quite striking flowers because of their interesting shape. It is so distinct that it can commonly be mistaken to come from two different genera – of the same family of course! Although, don’t let this confusion deceive you because the symbolic meaning behind these is just as truly interesting!

A Delphinium is popularly known for its tall erect stems and brightly colored spikes of flowers. This annual or perennial herbaceous flowering plant belongs to the genus Delphinium of the Ranunculaceae or Buttercup family.

Now, here’s an interesting fact! Delphiniums are also alternatively called Larkspurs. The intriguing thing about this is that only true Larkspurs belong to the genus Consolida. Few folks tend to get confused sometimes – and that’s alright because the two are actually related and look very much alike!

Delphiniums and Larkspurs are native to the regions of eastern North America and in some areas of high mountains in South Africa. The vibrant florals produced a blue to black colored dye and were traditionally used by native Americans and Europeans for writing and printing.

The Latin name Delphinium is taken from the Greek words Delphinion meaning Larkspur and Delphis meaning dolphin – referring to how the flower resembles the sea animal. Meanwhile, the common name Larkspur also refers to an animal – although not from the sea! This floral name is referring to how the seed pod appears like the claw of a small Lark Songbird!

The scientific name for a Delphinium is either Delphinium ajacis or Consolida ajacis – and the symbolic meaning behind this is just as diverse as its genera!

What is the Symbolic Meaning of Delphinium?

Here’s what to know about delphinium symbolism:

For a flower that bears two different names and resembles two different animals, the Delphiniums have a rich symbolic meaning. It was a blossom symbolic of Kings and high royalty – signified only the loyalty and strength of knights during knighthood. You may be wondering that since the flowers resemble a dolphin and bird, what else could these symbolically mean?

An old wive’s tale from sea pirates speaks of the magical wonders of these flowers. The rebellious seafarers believe it symbolizes playfulness and good luck – just like the dolphins! A few have even come to believe that this is a floral being with an open-hearted soul!

According to the ancient Greeks, a tale quite tragic is associated with a Larkspur. The flower was symbolic of ill-gotten mourning and despair. As the tale goes, Larkspurs were once floral messengers bearing the sad news of the suicide of Ajax. The blood spilled from his death gave life to these flowers. Some say that if you take a closer look at the blossom, you would see the initials AIA indicating the abbreviated name of Ajax.

There are a few other symbolic meanings associated with the Delphiniums. In the Victorian language of flowers, these blossoms speak of fickleness, heavenly company, and big-heartedness.

The Water Lily is another flower with a little bit of confusion. It is sometimes commonly mistaken for a Lotus! It is an aquatic plant with floating leaves and fragrant showy flowers. These gorgeous florals provide food for fishes and other wildlife but it has to be carefully maintained because it can clog drainages!

Water Lily flowers like the Delphiniums come from just a single genus. It may belong to either the Nymphaea, Nuphar, Euryale, or Barclaya genus all from the Nymphaceae family – so all true Water Lilies, even Lotuses are still related!

The family name Nymphaceae has an amazing history. It was derived from the Greek mythological creatures called the Nymphs. They were said to be beautiful maidens with a minor divine status who lived in small bodies of water such as streams, lakes, and rivers – just like where Water Lilies thrive!

Meanwhile, the Water Lily got its name for the most obvious reason. It is a plant that flourishes floating above water with its floating leaves known as Lily pads!

These aquatic flowering plants are native to regions of temperate or tropical countries all over the world! The most popular species – the fragrant Water Lily is scientifically known as Nymphaea odorata. Depending on the species and genera, Water Lilies are either annuals or short-lived perennials.

What is the Symbolic Meaning of the Water Lily?

Here’s what to know about water lily symbolism:

The beauty of a Water Lily is as divine and sacred as a Lotus – but with a different symbolic meaning! In the ancient beliefs and traditions of the Mayans, the Water Lily was a flower believed to be symbolic of the Earth.

There is a popular Native American folklore that tells of how a moonbeam sprite was trapped on Earth. She fell madly in love with the Dakota Chieftain’s son. Determined for their love to flourish, the two lovers sailed the river to receive the Chief’s blessing but only to end in tragedy. The beautiful sprite drowned to her death but emerged above waters as a beautiful flower.

In another historic legend of Native Americans, a young boy dreamt about these aquatic flowers previously a star from the heavens in search of a home. It tried living in mountains and even other flowers but did not succeed, returning back to the sky. Once up there, it saw its reflection in the water and decided then and there that that was home. It then bloomed into the Water Lily of today!

In some cultures, the Water Lilies had the symbolic meaning of persecution, purity, and majesty. The White Water Lily (Nymphaea alba) was regarded also as a religious symbol for charity.

For the early Egyptians, Water Lilies were a sacred representation of the gods symbolizing their eloquence and perfect beauty. They also believed that such blossoms were symbolic of the life-giving power of the Nile River and of Osiris – the Lord of the Dead.