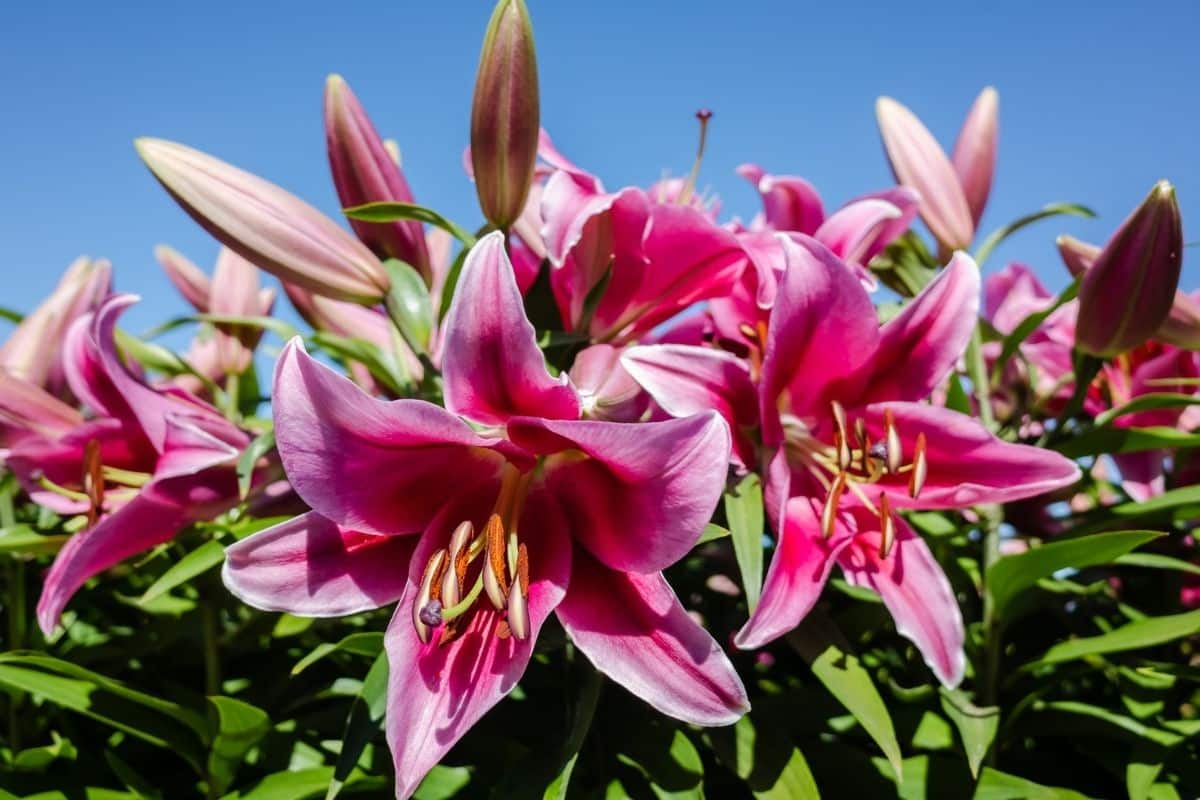 You have probably heard of and read about a dozen of Lily flowers – but this particular Lily is the origin of it all. For example, the Daylily is a true Lily flower but in fact, is not a Lily. What does this mean? These two flowers look alarmingly similar but are not from the same taxonomic genus nor family!

Luckily, there are a lot of beautiful meanings and interesting symbolisms about the Lilies – and it is not every day that you learn there is a hidden message behind such breathtaking beauty. If you’d like to know what the Lilies have to say, keep on reading folks!

The history of Lilies is quite as admirable as its bud in first bloom. Its botanical definition dates back to the early 12th century. Lilies are perennial herbaceous plants with erect leafy stems and bright showy flowers.

Lily flowers are a part of the genus Lilium belonging to the Liliaceae or Lily family. They are native to most temperate regions of the northern hemisphere. To date, there are about 80 – 100 species of this beautiful herbaceous flowering plant.

The genus name Lilium comes from the Middle English word Lilie referring to true, white Lilies. Meanwhile, the floral name Lily is a commonly used name to identify any flower from other genera resembling true Lilies. Quite confusing at first but all will make sense once you know the flower’s scientific name.

Lilies are one of the top favorite flowers of many floral enthusiasts. Some of the most popular species include the Madonna Lily (L. candidum), the Easter Lily (L. longiflorum), the Turk’s Cap Lily (L. martagon), the Wood Lily (L. philadelphicum), and the Goldband Lily (L. auratum).

There are quite a few fascinating symbols about the Lilies. Lilies are said to be a symbolic flower of the blessed Virgin Mary and Juno, the Roman Queen goddess.

And if you have been an avid admirer of the royal families, you would see that Lilies are regarded specifically by the French royal family as a heraldry symbolic emblem.

A few nations have particularly associated feminine symbolisms with these magnificent flowers. In the Middle East, a Lilium flower is said to be divine and sacred to the primal goddess of fertility, Astarte.

For the ancient beliefs of the Chinese, Lilies were symbolic of a mother who is pure of heart.

The Assyrians, Babylonians, and Egyptians believe it is a floral symbol for fruitfulness and bounty.

Ancient Greeks also came to say that the Lilium blossoms were also a sacred symbol of Britomartis or Dictynna – the great Mother and Patron of fishers and sailors. It was also a symbol of the Greek Goddess Hera – goddess of the moon, earth, air, a woman’s life, marriage, and children.

Meanwhile, there is a Roman counterpart goddess who is symbolized by this flower – that is none other than Juno, goddess of life, sky, marriage, and motherhood.

In the Victorian language of flowers, Lilium blossoms meant a youthful innocence.

When the first bud blooms in spring, it means a beauty revealing and wealth to flourish. In some instances, folks say that Lilies give off the meaning of coquetry, pride, and a lucky charm used by single maidens!

Some folks say that when you witness the first full bloom of this flower, it means that you are very honorable and pure.

What does a White Lily Flower Mean?

A white Lilium flower has a meaning of being majestic and heavenly – very much shown by the Madonna Lily. This flower can also stand for being modest.

What does a Pink Lily Blossom Symbolize?

Soft pink Lilies are symbolic of a mother’s passionate love and simple beauty. Additionally, it also can symbolize a bounty of prosperity and expressions of gratitude.

What does a Yellow Lily Floret Indicate?

Lilium flowers with yellow petals glisten just like the sun on a bright day. These flowers indicate feelings of happiness and youthfulness.

What does an Orange Lily Bloom Represent?

If you are looking for a blossom that represents unmatched determination and awe-struck fascination – then an orange Lilium flower is just what you need!

What does a Red Lily Flower Symbolize?

A deep red Lily flower is truly a spectacular sight! You would be inspired when you witness this because it is symbolic of high aspirations and a lofty spirit!

What is the Cultural Significance of a Lily Blossom?

The French royalty has a very embedded cultural history for the Lilies. It is known as the fleur-de-lis in French and was honored as an emblem for heraldry long associated with the French crown.

During the baptism of Clovis, King of the Franks – the Lily was bestowed by none other than the Virgin Mother herself to the King.

What is the Biblical Meaning of a Lily Floret?

Since Christian time anew, the Lily has been no doubt known as a holy flower. In fact, the Madonna Lily is the most popular symbolic flower of the Virgin Mother Mary – it symbolized her purity and was always painted alongside Her in portraits.

Some believers have also come to tell that the Madonna Lily symbolizes the Annunciation of Mary with the Arch Angel Gabriel. After such, the Roman Catholic church adopted the flower as the symbol of Her sanctity and is well versed in the Catholic doctrine of the Immaculate Concepcion.

There is a Christian belief saying that the true origin of the Lilium flower comes from the tears shed by Eve as she left the garden of Eden. Just like the Holy Mother, this is also symbolic of purity.

What is the Spiritual Influence of a Lily Bloom?

The essence of a Lilium bloom has a very strong spiritual influence. The presence of this blossom increases the innate ability to love unconditionally and universally. It does so by creating an in-depth understanding and acceptance of different spiritual perspectives.

Lily essences are visual manifestations of divine energy. It brings out a divine love and radiant beauty in any surrounding. Likewise, it is the master for inspiring cleansing, harmony, and peace.

What is the Folktale Associated with a Lily Flower?

There is a story vaguely different from the biblical story of the origin of the Lilies. According to Roman mythology, the first Lily to bloom sprang from the breast milk of the goddess Juno – Queen of all nature. This is one of the reasons why many believe that these flowers are symbolic of mothers and prosperity.

What does a Lily Floral Tattoo Symbolize?

Since Lilies are one of the top ten most popular flowers in the world – it isn’t any wonder why a lot of folks choose this for a floral tattoo. Those who choose a tattoo of this flower would want to symbolize their glowing inner beauty and undoubted humility. In another perspective, these florals can also embody purity and chastity just like the Virgin Mother Mary’s!

Oh, Lily – these are so adored in ornamental gardens or indoor potted plants! If you’d like to share its beauty with some dear, you may also have it beautifully arranged in a floral bouquet or vase.

But Lilies do not only have horticultural uses, in fact, these plants are also used in the culinary industry and as well folkloric medicine. In the Middle East, various Lilium species are used as fresh or cooked delicacies and dishes! For example, the Easter Lily bulbs are considered a delicacy food when the stamens are removed! It can be added to fresh salads or cooked along in soups and rice dishes.

Additionally, Chinese cuisines dried or fresh flower petals as a seasoning spice. It is mostly enjoyed during the summer and can be prepared by baking, grating, grounding, or pickling!

For folkloric medicine, the Madonna Lily was most commonly used amongst all the species. The ancient Greeks and Romans originally cultivated it for use as a medicinal ointment. It contains anti-inflammatory, diuretic, emollient, and expectorant properties.

According to herbal medicine, it can help relieve heart diseases and cardiac regional pain. It also claims to treat myopic astigmatism and strengthen eyelid muscles. In Korea, it was once traditionally used to treat dry coughs, sore throats, palpitations, and skin boils. A word of warning that it’s a must to always consult a medical professional before using this plant or any part of it for medical purposes.