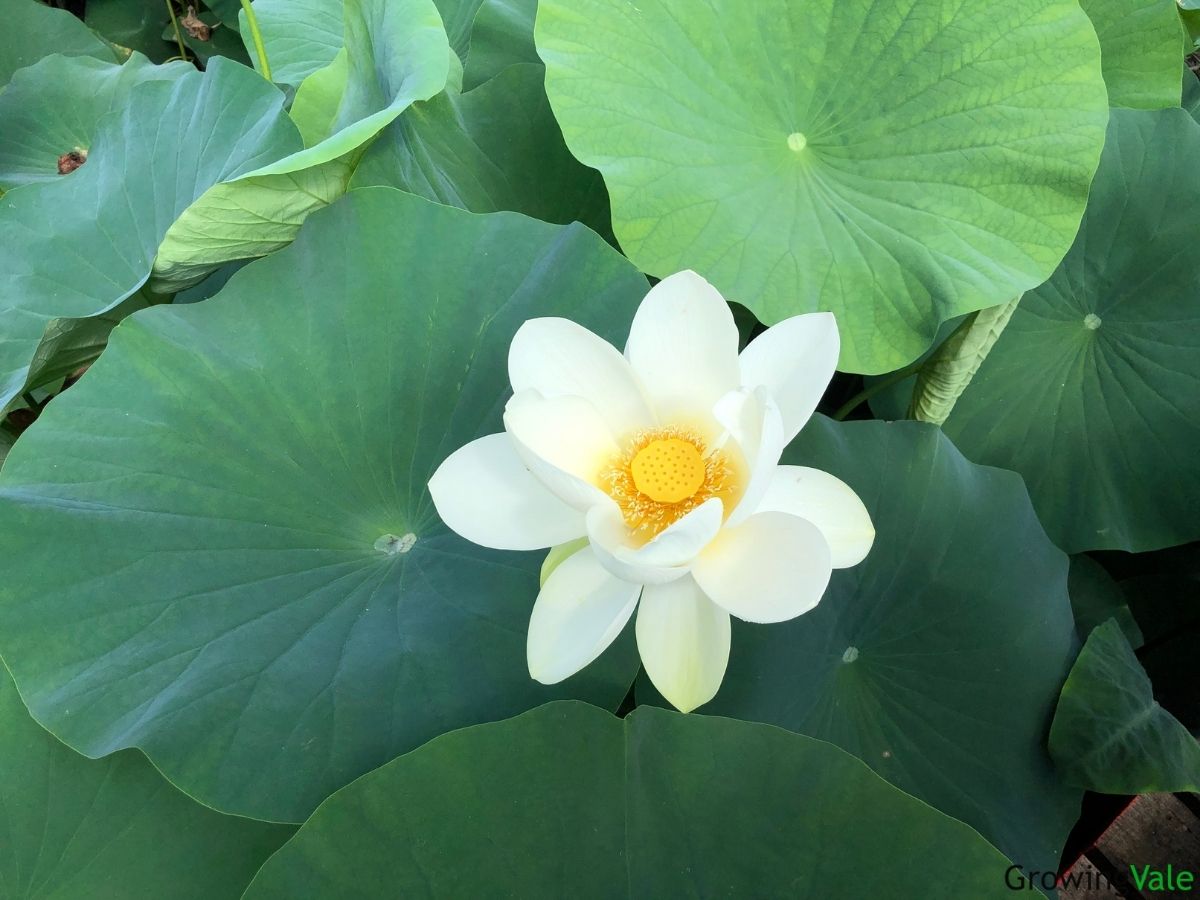 Sitting gracefully above calm waters, the Lotus is known as one of the most sacred flowers in the world. What’s unique about these florals is that, unlike other plants, it actually thrives and lives in water with a little bit of sand or soil! Its radiant beauty and elegant appearance also make this a very holistic floral motif in many cultures and religions.

Growing Lotus flowers is quite simple and often requires a pond and a lot of sunlight! Not only that but the message and symbolism behind these water blossoms will make you want to add a pond to your garden ASAP!

The Sacred Lotus is the highlight of this article. The plant’s rich history dates back to the beginning of Buddhism in the early 6th century. Through time, the sacred Lotus was then defined in the 15th century as an aquatic plant with white or pink delicate yet elegant flowers.

This divine blossom belongs to the genus Nelumbo of the Nelumbonaceae or Lotus-Lily family. It will come off as a surprise that there are only around two to three species from this genus which are native to Southern and Eastern Asia as well as Australia,

The few species of this flower can also be called the Padma – its Buddhist name. Such species include the Hindu Sacred Lotus (N. nucifera), the North American Lotus (N. pentapetala), and the Yellow Lotus (N. lutea).

The blossoms every day symbolizes the rising sun in mystical astrology and anything involving the solar matrix. The flowers close and sink at nightfall and only rise to bloom again during the day – just like the rise and set of the sun.

Nelumbo flowers are images of fertility, sexuality, and the rebirth of the dead. It represents the spiritual evolution of man and all living things as well as the immortality of the spirit.

In Asian traditions, the lotus symbol represents the four elements of nature – earth, air, fire, and water. This flower was also known as the Moon Plant. Its elegant floral reflection on water represents a soul transcending into flesh – rising from the chaos and illuminating a pure matter and spirit.

The meaning behind Padma blossoms is both very divine and sacred. In Ancient Egypt, Nelumbo flowers in bloom spook of new creation and rebirth. These flowers were pictured as the seat of ancient Egyptian gods above muddy waters.

In Buddhism, the Lotus Buddha is seen as a god-like being sitting still – this speaks of a being that had just overcome the prevailing pain of the material world and has become enlightened. Like the ancient Egyptian gods, several Hindu gods are also portrayed seated on a Lotus.

What does a White Lotus Flower Mean?

A white Padma flower speaks of the purity of the mind and the chastity of the body.

What does a Pink Lotus Blossom Symbolize?

Nelumbo blossoms with pretty pink petals are symbolic of a womanly or goddess-like elegance and grace.

What does a Purple Lotus Floret Indicate?

Purple Lotuses have a softer appeal in beauty as one might say. This floral indicates a sense of self-regeneration and reaching spiritual enlightenment.

What does a Red Lotus Bloom Represent?

If there is a flower out there that represents an estranged love or relationship – a red Lotus is just that!

What does a Blue Lotus Flower Symbolize?

The divinity of a blue Nelumbo flower symbolizes the rebirth of a soul.

What does a Yellow Lotus Blossom Mean?

A yellow Lotus bloom has the sacred meaning of being highly spiritual and above all material things.

What is the Cultural Significance of a Lotus Flower?

The cultural impact of Nelumbo flowers is not only limited to India. Its divinity also transcends in many cultures such as those in China and Japan. In ancient Chinese culture, the Lotus symbolizes the season of Summer and the fruitfulness it brings.

The flowers are portrayed as motifs in many traditional paintings, architecture, and embroidery. When held as a sacred symbol during rituals or celebrations, the flowers are entwined with ribbons and fillets representing a halo.

For the ayurvedic healing ceremonies in India, petals of fresh Lotus blossoms are sprinkled into water bowls and drunken. This was a traditional sacred practice of anointing the various parts of the human body.

What is the Biblical Meaning of a Lotus Bloom?

The religious meaning of a Lotus isn’t confined to the readings of the Holy Bible. In fact, this flower is also mentioned in other sacred texts of Hinduism and Buddhism.

According to Christian readings, the Archangel Gabriel was believed to be holding out his hands with a bouquet of Waterlilies during the Annunciation of the Virgin Mary. This act was symbolic of the elements of fire and water – the creation and generation of man and flesh which is a similar symbolic meaning for Lotuses.

In the sacred texts of Buddhism, the Lotus was said to be held by Bodhisattva who announced to Mahâ-Mâyâ, the birth of Gautama Buddha – the world’s savior.

What is the Spiritual Influence of a Lotus Floret?

The Lotus has one of the strongest spiritual influences amongst any flower in the world. The essence of this flower is inviting the shower of blessings from the gods – bringing forth good fortune and a deeper sense of spiritual connections.

These flowers initiate building strong foundations of focus and daily living. It also acts as a healing floral that eases emotional worries and anxieties.

A Nelumbo blossom may also help in embodying desirable traits. These flowers assist in the embodiment of humility, deepening spiritual understanding, and encouraging public service.

What are the Folktales Associated with a Lotus Blossom?

Since it is creation and rebirth, some folktales and myths about Lotuses speak about that. Once upon a time during the period of creation, a giant Lotus flower emerged from the pond giving birth to the brightest star in the sky – the sun.

One Indian legend says that the Lotus isn’t the mother of the sun but was actually a fallen star from the sky! Once the star splashed into the water, it changed into the Lotus flower.

In an ancient Egyptian myth, it was believed that the god Horus arose from the blooming of a Nelumbo blossom. This was a representation of godly immortality and eternal youth. Many have to say that this also was a portrayal of the resurrection – sinking down below at night only to rise again with beauty at dawn.

What does a Lotus Floral Tattoo Symbolize?

A Lotus floral tattoo is symbolic of spiritual awakening to the reality of life. Those who choose this have achieved a deep understanding of spiritual and self-enlightenment.

For Indian traditions, this tattoo depicts the experience of an individual who has overcome temptations and has become a better person. It is a design that radiates the person’s beauty and divine purity.

Lotuses are one of the many few flowers seen in small ponds or lakes. In ornamental gardening, enthusiasts love to make these flowers the centerpiece of the area. For special occasions, the flowers are cut and also used as a centerpiece or a religious offering such as in the customs of India and Thailand.

Several parts of a Nelumbo plant are used in many fields and industries. In India, dried seed stalk receptacles are used to decorate various floral arrangements. Fresh stalk fiber is also used in creating wicks of sacred lamps and candles.

Ancient Chinese traditions also have many uses for the Lotus. It was once used as an antidote for mushroom poisoning. Traditional Chinese food is also wrapped in Lotus leaves to enhance flavor and aroma. Its flowers are also eaten in cook dishes as we as dried to make tea infusions.

Other parts such as the leaves, seeds, and flowers are used as a traditional treatment for cough, smallpox, fever, and cholera. In popular medicine, it can also treat tissue inflammations, certain types of cancer, and skin diseases.