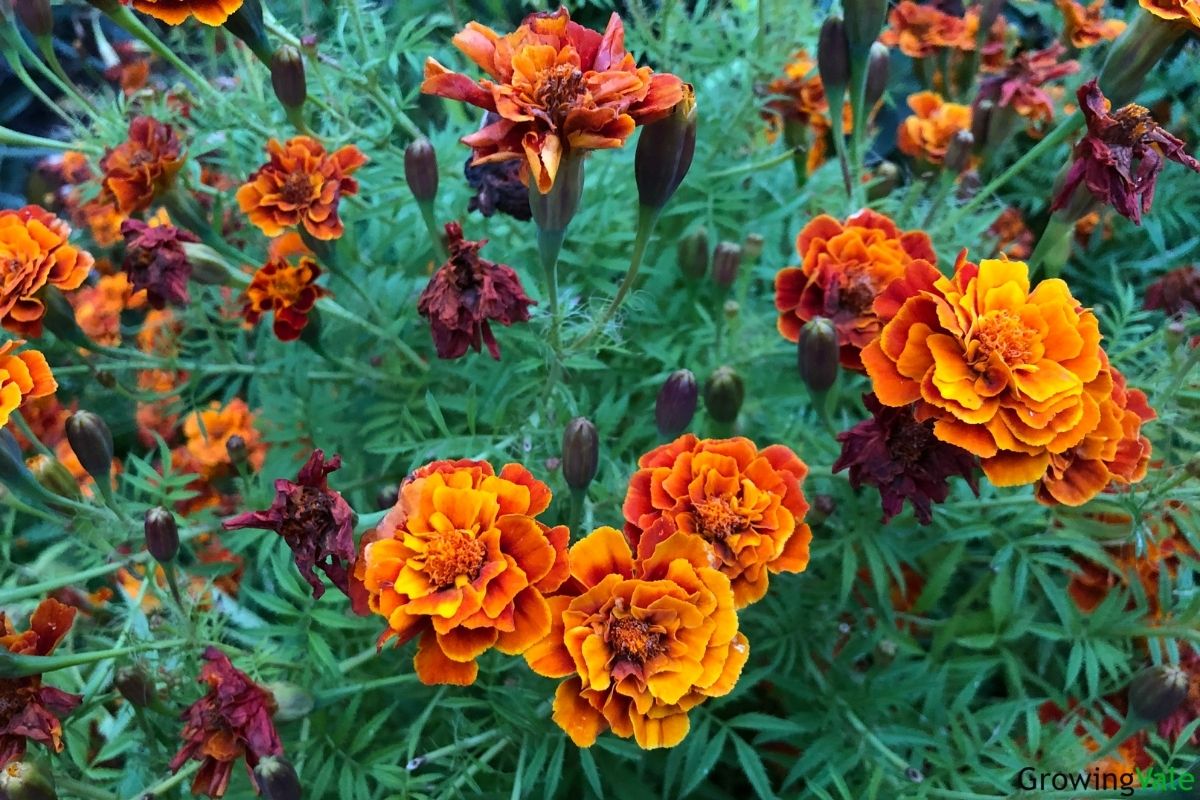 Marigolds are said to be flowers that are as bright and blazing as the sun. You would believe this to be true once these flowers begin to bloom and dazzle in the morning! Although amidst this, the Marigold also has its own fair share of dark meanings and symbols.

The first mention of the floral name Marigold came to light in the 14th century. It originates from either the Calendula or Tagetes genera of the daisy or Asteraceae family. The genus Calendula derives from the Middle English name of Mary, the Mother of Jesus, and gold.

Calendula also has a derivation from the Latin word calendae meaning the calendar flower or first day of the Roman calendar. On the other hand, Tagetes derives from the New Latin word Tages who is an ancient Etruscan deity.

Marigold species are mostly annual but a few are perennial garden plants. It is native to Central America and Mexico. Some of the most commonly cultivated species of the Marigolds today include the African Marigolds (Tagetes erecta), French Marigolds (Tagetes patula), and Pot Marigolds (Calendula officinalis).

So, What Does Marigold Flower Mean and Symbolise?

The most popular symbol associated with these Marigolds is the sun and well, for obvious reasons at that! Its flower petals shine and blaze just like the sun and only blooms from nine in the morning until past three in the afternoon!

These blooms are also known as the herb of the sun for the symbolic meaning of the journey of the giant star in the sky throughout the course of a day. In the case of the zodiacs, it represents Leo and is known to strengthen the heart!

The flowers are also symbolic of the Virgin Mary and can also be called the flower of Mary or the sacred seal of God.

The gold-like petals symbolized the crown on Her head and only bloomed during festivals honoring Her. It was made as a religious offering to the Blessed Virgin by the poor who could not afford actual gold.

Very contrasting meanings are associated with Marigolds of all shapes and colors. The meanings associated with the vibrant color of the flowers include winning grace, sacred golden light, golden prosperity, splendor, and presage.

What does a Yellow Marigold Flower Mean?

Marigolds with yellow petals send the message of desire for riches and change. It is also symbolic of expressing one’s trueness and eagerness with discovering new opportunities when life is viewed from a positive perspective.

What does an Orange Marigold Blossom Symbolize?

An orange Marigold is just as bright as a yellow one appears to be. It symbolizes healing in a mental and spiritual sense. Purity and innocence as well as a colorful imagination are associated with these blooms.

What does a Red Marigold Bloom Represent?

Red Marigolds hold the representation of being the emblem of constant affection and sympathy in joy and in sorrow. Endurance in love and fidelity are also linked with blossoms of this color. In theatrics, these are perceived as sad flowers in poems and plays. It displays the strengths of one’s passion and happiness as well as everyday creativity.

What is the Cultural Significance of Marigold Blooms?

The Victorian era believed that Marigolds bear the message and expression of grief and cruelty. This relation comes from how the flowers appear when it is time to bloom!

When the sun sets and the night falls, the flower bows its head and droops into a curl. As the sun rises and the warmth sets in, the flowers open and hold within it the dew of the evening that makes it look like tears!

The Irish folk also believed that these blossoms were cultivated as the protection granted by fairies against evil influences. During the May Day festival honoring May Eve, children gathered these flowers after dusk and made lovely garlands to hang on doors.

What are the Superstitions or Mythologies Associated with Marigold Flowers?

The Marigold is also called the husband man’s dial for a very interesting reason. The beautiful flower petals are used as an ingredient in love charms for rituals or worn as talismans for good fortune in love. It is also embellished as a garland in weddings to shower the happy couple with prosperity and grace.

An old hearsay believes that these florets stimulate prophetic and psychic dreams when placed under a pillow!

What does a Marigold Floral Tattoo Symbolize?

Aside from being known as the flower of Mary, Marigolds are also associated as the blossoms of October. Bearing the beauty of this floral tattoo design embodies grief, vibrancy, and success.

Unlike other flowers, Marigolds have several very unique uses in the fields of culinary and medicine. The flower petals are used either dry or fresh to give a vibrant color in many soups and drinks. Shropshire housewives also made a special cheese from this! How cool is that?

Meanwhile, medical claims of this flower include anti-inflammatory and antiseptic properties that are used to treat ailments such as ulcers, bowel problems, hemorrhoids, and varicose veins. It also has a claimed antibacterial property that can fight against various skin irritations and infections such as gangrene and tetanus.

It can also serve as a cure for common fevers and indigestion problems. A word of warning that it’s a must to always consult a medical professional before using this plant or any part of it for medical purposes.

Did you know that Marigold is an October flower?