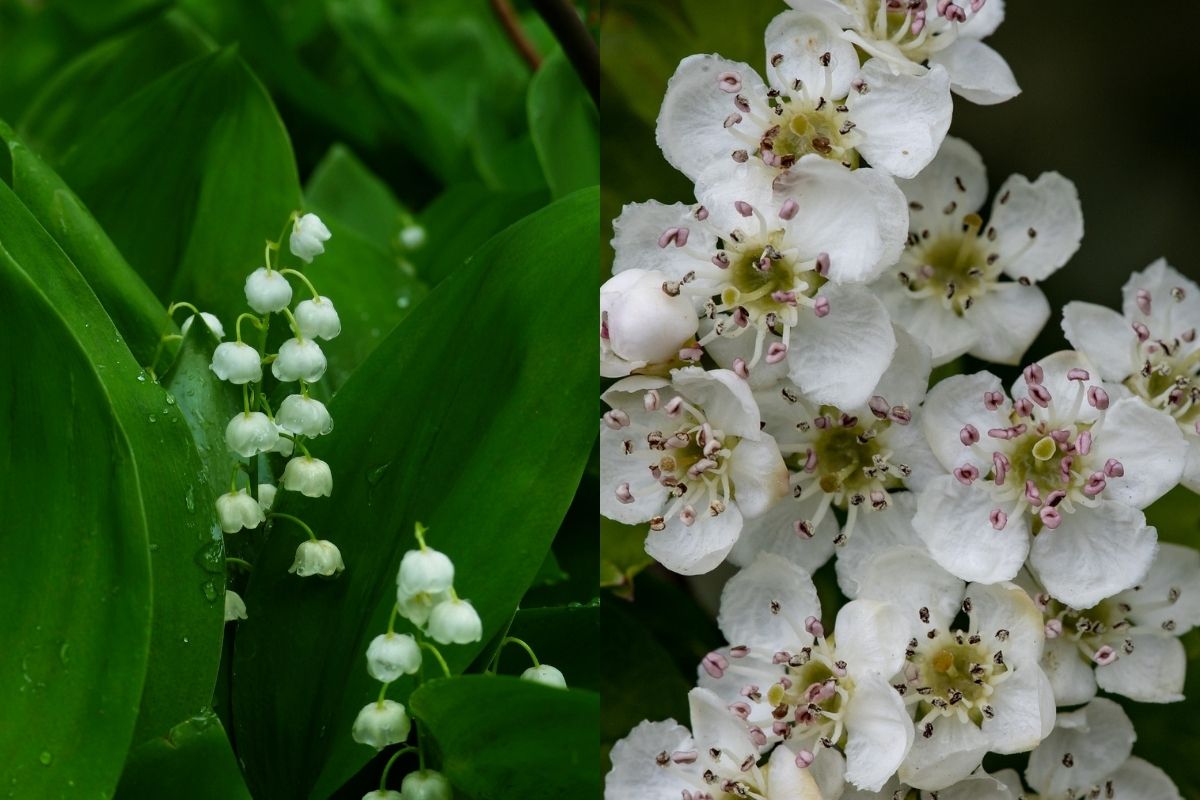 Named for the Greek Goddess Maia who was the shepherd of plants, the month of May is a time of fertility and beauty and a sign that summer is on its way. More than just the fifth month in the Julian and Gregorian calendars, May is full of exciting celebrations like May Day, Cinco De Mayo, Mother’s Day, and Memorial Day.

It is also when the birth flowers lily of the valley and hawthorns are used to celebrate all the wonderful people with May birthdays!

Lily of the Valley

It might be surprising to hear, but lilies of the valley are not true lilies, rather they are part of the Asparagaceae (asparagus) family. They are called lilies because their foliage is very similar to that of asparagus so it was once thought they belonged to the same genus.

Coming from the cool, temperate climates of northern Asia and Europe and first cultivated in 1420, lilies of the valley are low-growing perennials with white, bell-shaped flowers. Their scientific name, Convallaria majalis, comes from the Latin words “Convallaria ”, meaning valley, and “majalis” meaning May – a name perfectly suited for a May birth flower! However, these woodland bloomers are also referred to as glovewort, Apollinaris, or May Bells.

Other nicknames are Mary’s Tears and Our Lady’s Tears. These alternative names come from the two unique origin tales of these sweetly-scented spring flowers. The first legend says that they blossomed from Eve’s tears after she was banished by God from the Garden of Eden. The other suggests that the lilies of the valley are Mother Mary’s tears cried for Jesus when he was crucified by the Romans.

With a historical background of such importance, it is no wonder that glovewort is still celebrated throughout the world. In fact, May Bells are Yugoslavia’s floral emblem and the national flower of Finland.

What is the symbolic meaning of lily of the valley?

Here’s what to know about lily of the valley symbolism:

If you are in France and lucky enough to be given May Bells on the first of May, it means someone special is trying to show their affection and wishes for luck and prosperity for the new year. This flower-giving tradition dates back to 1560 when King Charles IX began giving all the ladies of his court lily of the valley bouquets to spread good fortune. This tradition became known as La Fête du Muguet, or lily of the valley day, and is still celebrated today.

In other parts of the world, Mary’s Tears are a way to celebrate spring and to wish happiness and good luck for the coming year.

The sweet scent of the lily of the valley birth flower is also thought to represent both purity and humility. Their dainty, orb-like flowers are also believed to drive away evil spirits which brings a profound sense of peace and serenity. This is why Our Lady’s Tears are not only May flowers but also commonly found in funeral flower arrangements as a way to symbolize loss and mourning.

In other cases, Convallaria majalis is a representation of the pure sweetness that comes from rebirth and modesty.

With their abundance of white and pink five-petalled blossoms that transform into delicious red berries, hawthorn shrubs are a perfect birth flower for May. So much so that they are often called May trees!

This May flower of the month is also sometimes called one-seed hawthorn or single-seeded hawthorn. However, it has many other names like common hawthorn, thornapple, quickthorn, hawberry, or whitethorn.

With their thorn-tipped branches and spiraled leaves with lobed or serrated edges, there is a clear family resemblance between this Crataegus genus shrub and its Rosaceae (rose) family.

Although they are Native to northwestern Africa, West Asia, and Europe, hawberries are widely used in temperate gardens throughout the world.

Their edible flowers and leaves also have long-standing roles in traditional herbalism. In modern times, thornapples have become prized for their antioxidant properties and ability to treat cardiac insufficiencies.

What is the symbolic meaning of hawthorns?

Here’s what to know about hawthorn symbolism:

With their unique combination of elegant flowers, healthful berries, and piercing thorns, quickthorns have multiple meanings dating back to Celtic times when it was declared as enchanted. This is because they believed whitethorns represent beauty, nourishment, and fertility as well as a strong protection.

This symbolic meaning still exists today but has also expanded in breadth as whitethorns are now widely regarded as supreme representations of happiness and hope – something derived from their all-encompassing positive qualities that bring nothing but positive feelings!